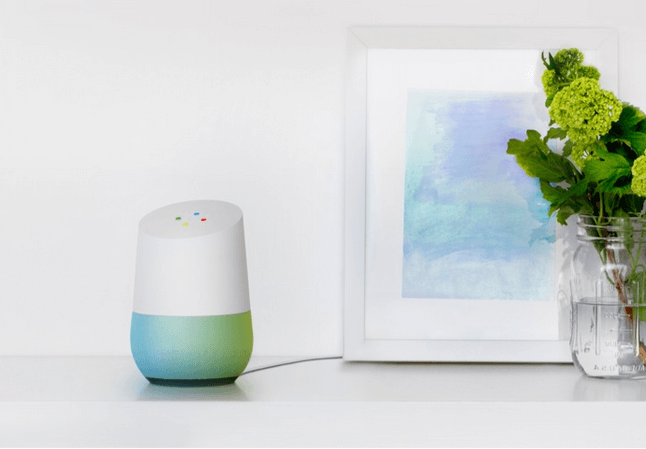 It’s a short white cylinder with an angled top surface, decorated with four small dots using the colors from Google’s logo — red, yellow, green, and blue. And it will soon be ready to answer your questions, play your favorite songs, check the traffic on your morning commute, and dim the lights in your bedroom.

“Google Home” finally made its first public appearance on Wednesday at this year’s I/O conference in Mountain View, California. The device is scheduled for release later this year.

Right now its web page only offers a 28-word description, plus a form where you can enter your e-mail address to receive updates —  and some tantalizing images. There’s the Google Home unit in a kitchen, standing unobtrusively next to salt and pepper shakers. Then it’s on a nightstand, next to a dim lamp and a white flower in a vase, and then on a desktop next to a framed painting.

You can swap in different bases for the device — green, grey, black, or even purple — and according to Google’s presentation on Wednesday, Google will also offer a choice of different textures, either metal or fabric. “With Google Home, we set out to create and design a beautiful product that’s warm and inviting, and fits naturally in many areas of the home.”

But everyone knows what it really is. Google’s answer to Amazon Echo.

“Google has seemingly let the competition catch up — level the playing field, even,” one analyst told the New York Times, noting that Apple and Facebook are also heading towards virtual assistants. And an article in The Verge notes this product announcement was a long time coming. “Google is finally doing what everybody wanted it to do: release a competitor.”

The Verge quotes Mario Queiroz, the head of the Google Home team, as saying the device “really fills the room” with “strong bass and clear highs,” which may help distinguish it from Amazon’s Echo. “Speaker slugfest,” read the headline at USA Today. “Google Home vs. Amazon Echo.”

The Verge also reports that the new device will be compatible with Google’s Chromecast, so you can also command Google Home to stream YouTube clips on your TV… “We’re competing feature for feature in most of the areas,” Mario Queiroz continues. “And in the areas that really matter to the consumer, we’re going to do a better job.”

But there’s no API yet for developers, reports The Verge, saying the device “is going to work with a smaller set of home automation devices,” probably including lights and thermostat.

But Google’s working hard to maximize its usefulness, and on Wednesday announced a new smart messaging app called Allo. It can anticipate possible responses, apparently eliminating the need to type out things like “Yes, I’ll be coming home for dinner” after the app has already seen you typing out several similar messages.

Of course, another way to look at this is “Google will be reading your text messages.”  The next day, a columnist for The Verge was asking, “Do you trust Google to always be listening inside your Home?” One commenter on YouTube made the inevitable comparison to the untrustworthy robot from “2001: A Spacy Odyssey.”

Now the biggest question left may be what to make of this Brave New Google World. In an unfortunate coincidence, Sunday updates began appearing about a lawsuit against Google involving 890 college students in California who said Google scanned their emails to target advertising with their “Apps for Education” product.

And there was a thoughtful comment on Hacker News about this moment in technology history. “When I was younger, I dreamed of something like this. Voice control for my home! A Star Trek computer that I can interact with conversationally…!” wrote a user who identified himself Chris Heald, the chief architect at Mashable. “Now, I just see an internet-connected microphone in a software black box which I can only interpret as a giant frickin’ security liability. I want this, but unless it’s open source top-to-bottom… We know too much about how these things can be abused for me to ever seriously consider it without being able to verify for myself what it’s doing and why.”

Many other comments echoed the inevitable concerns about privacy. “Never EVER under any circumstances would I put a closed-source cloud-connected always-on microphone in my house,” one person wrote.

Others suggested the possibility of a similar device but which runs off your home server: “It enables people with some interest in one another to connect directly, one-to-one, instead of running around in some third party’s server. This opens possibilities for exchange and networking on a very personal basis that we don’t have today mostly because of privacy concerns (virtual neighborhoods and the like).”

But the big thing that changed this week is a Google home device is no longer a theoretical possibility. It’s here. And on a sunny day at the outdoor amphitheater, just a half mile away from the Googleplex, the audience watched as a video showed the device at work in the home of a typical American family. The song playing gently in the background was “Home” by Phillip Phillips.

There was laughter when the dad broadcast his playlist into every room in the home, waking up his sleeping children — and then later remotely turned on the lights to make sure that his son was up. Text messages were sent, dinner reservations were changed, all using Google Home, and it even answered a child’s questions using YouTube video clips on the family’s widescreen TV. “That’s cool,” someone in the audience murmured, and at the end of the presentation, the audience applauded loudly.

The video ended by displaying the words, “Meet Google Home.”