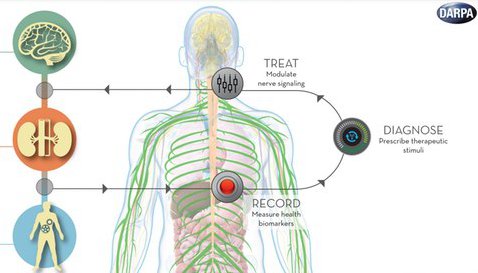 We are used to the idea of doctors prescribing pharmaceutical drugs or performing surgery if we’ve got some serious illness. But as anyone who has listened to a drug advertisement, there can be a litany of unintended side effects with drugs. The next best thing – and perhaps the new cutting edge of medicine – would be applying therapeutic, electrical impulses directly to patients’ nerves.

That’s the idea behind ElectRx (pronounced “electrics”), a new biomedical program being spearheaded by the Defense Advanced Research Projects Agency (DARPA). It’s not the electro-shock therapy of yore but instead would combine the latest in nanotechnology with neuromodulation. The goal is to develop ultra-small, bio-electrical interfaces and real-time biosensors that would be injected directly into the body. These implants would send electrical signals to modulate or correct the activity of peripheral nerves that are ‘misfiring’ and causing the patient pain or disease, thus promoting the body’s innate capacity to heal itself.

Using electricity, light, sound and magnets to heal the body

But using electricity in vivo is only part of the bigger picture. Earlier this month, DARPA announced that it will be offering grants totalling USD $78.9 million to various research teams who will investigate several methods of nerve stimulation, including using light, sound and even magnetic fields to treat conditions like depression, chronic pain, post-traumatic stress disorder (PTSD) and inflammatory diseases – illnesses which may not respond well to traditional treatments. The first phase of the program aims to better map neural circuits and analyze what role they play in the unfolding of disease.

“The peripheral nervous system is the body’s information superhighway, communicating a vast array of sensory and motor signals that monitor our health status and effect changes in brain and organ functions to keep us healthy,“ says Doug Weber, biomedical engineer and the program manager for ElectRx. “We envision technology that can detect the onset of disease and react automatically to restore health by stimulating peripheral nerves to modulate functions in the brain, spinal cord and internal organs.” 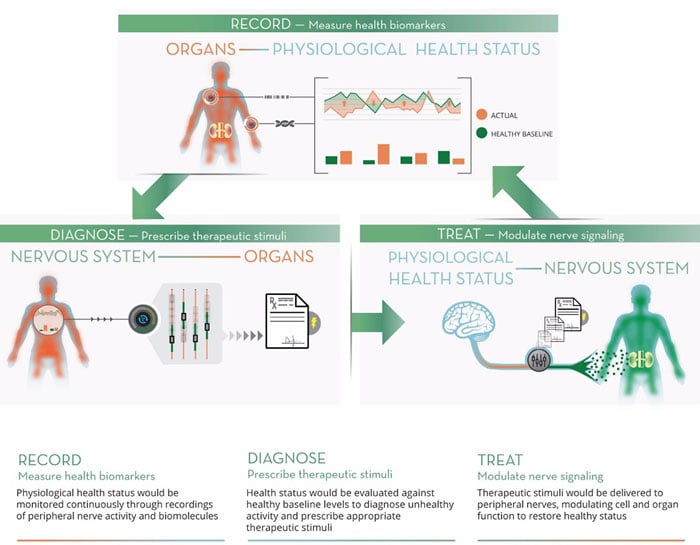 Research into light-based neural stimulation will be led by Circuit Therapeutics, a startup co-founded by Karl Deisseroth who is one of the pioneers in the field of optogenetics, where light is used to control neurons that have had photosensitive proteins inserted into them, allowing them to be turned on or off, using light pulses. This team will explore how optogenetic techniques could be utilized in treating neuropathic pain.

For sound-based treatment, it’s already known that ultrasound can stimulate neurons. According to Spectrum, what Elisa Konofagou and her team from Columbia University want to discover is how the mechanics of this process actually work, and what this technique might do for chronic conditions. It’s her belief that ultrasound exerts pressure on biological tissue, stimulating certain channels in neurons and causing them to become active or inhibited.

Yet another team will be investigating how magnetic fields can be used to trigger activity in neurons. MIT’s Polina Anikeeva and her team are working with magnetic nanomaterials that attach themselves to neurons, which heat up when exposed to a magnetic field, thus stimulating the neuron itself, wirelessly and with minimal intervention.

The ultimate goal of DARPA’s program is to develop a complete, “closed-loop system” where biosensors work in tandem with neuromodulators implanted in the body. The result would be devices that could be implanted on a long-term basis, which could monitor any biological indications of disease, and which would automatically respond with targeted, therapeutic neural stimulation, with great specificity and as few side effects as possible.

While all this will be a great boon to medicine, given DARPA’s raison d’être as a research arm of the Pentagon, there’s little doubt that these developments will someday find a military application. One might imagine these bio-electrical interfaces being injected into robot-human hybrids, or super-soldier cyborgs, enhancing their health and resiliency on the battlefield, or perhaps allowing returning veterans to heal mental and physical traumas. It’s not clear what kind of ethical landscape we are headed toward, but one thing is for sure: any tool is neither inherently good nor bad — it’s what you do with them that matters. More information at DARPA’s ElectRx.