Delivering Power with Wi-Fi Signals to the Next Billion Devices, No Batteries Required 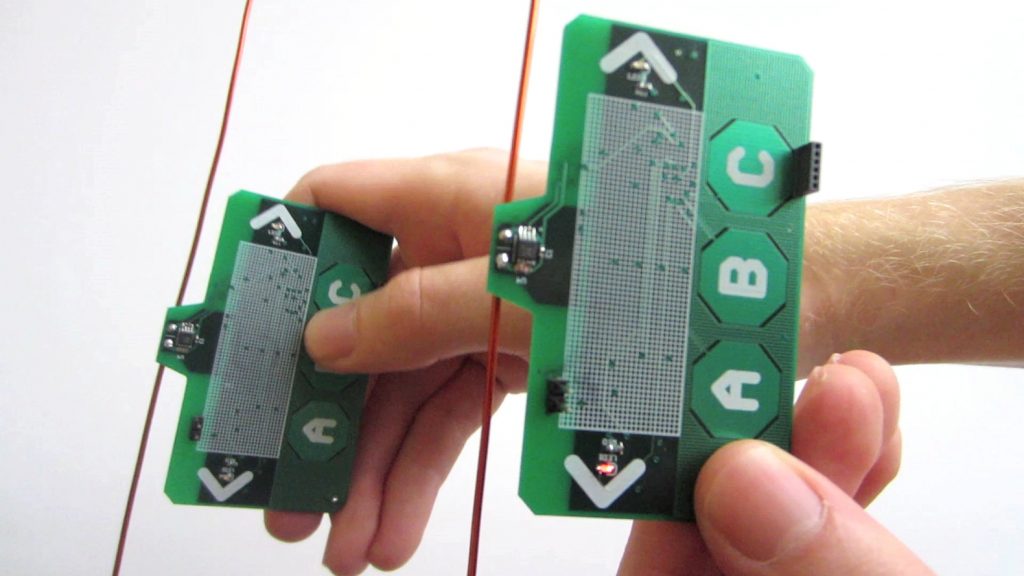 Images via EmTech Digital talk.
“Power over WiFi”: Researchers have found a way to harness the energy found in Wi-Fi signals to power devices, while simultaneously transferring data, all without a battery.

Many of us take radios, smart phones and other forms of wireless communication for granted. Wireless computer networking — also known as WLAN (wireless local area networks) and Wi-Fi — is another wireless technology that is widespread enough that we can now go into a library or a café and connect to the Internet without a second thought.

But Wi-Fi may someday also become a widespread source of power, according to a team researchers at University of Washington that have developed electrical devices that can run battery-free, using only the “ambient backscatter” of Wi-Fi signals to run them.

The concept has been dubbed “PoWiFi” — short for “power over Wi-Fi.” The idea is to harvest existing wireless signals and convert them into direct current voltage that will power battery-less devices, or even recharge batteries without the need for a plug-in charger — all without affecting communication performance. The team’s findings were published in a paper titled “Powering the Next Billion Devices with Wi-Fi,” and as Shyamnath Gollakota, assistant professor of computer science and engineering, explains in this recent EmTech Digital talk:

This is similar territory already being explored by RFID (radio-frequency identification) technology and other Wi-Fi-powered projects, but the University of Washington team is the first to investigate how battery-free devices might be simultaneously powered by and communicate over Wi-Fi. The team chose Wi-Fi as a power source over television signals because it is stronger and nearly ubiquitous indoors, and it is cheaper, given Wi-Fi’s economies of scale.

In their experiments, the research team modified existing Wi-Fi chipsets — which are designed to take in information from wireless signals — to harvest the energy found in these signals as well. This modified “harvester” efficiently gathers power across multiple Wi-Fi channels with a minimal return loss. This was then converted into direct current voltage using a rectifier, and boosted with a DC-to-DC converter to meet the power requirements of the device. 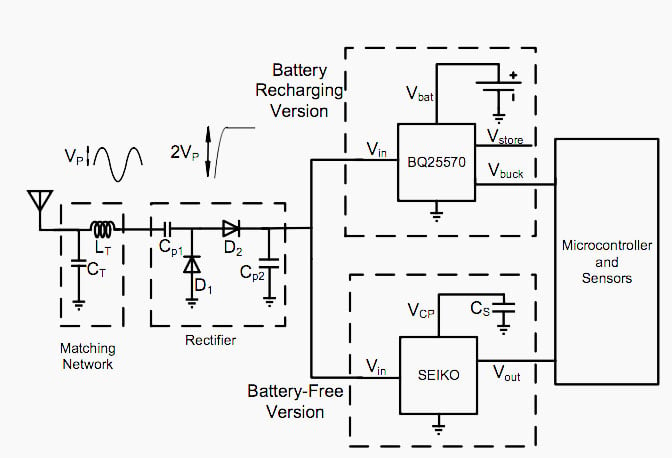 The issue of wireless communication between these battery-free prototypes and existing Wi-Fi devices was then addressed. Here is where “ambient backscatter” comes in handy again, as these extra transmissions can be “piggybacked” on existing Wi-Fi data packets that are already being reflected or absorbed by the device. The team found that instead of consuming the hundreds of microwatts that are usually required for Wi-Fi communication, this “Wi-Fi backscatter” exchange used only nine microwatts of power.

But the researchers also discovered that there was a trade-off: higher power delivery meant lowered Wi-Fi performance, since routers typically broadcast in bursts on a single channel. As soon as the broadcasts stop, the voltages drop. So, the question was how to simultaneously provide consistent power without compromising network performance. The answer was to ‘trick’ the router into sending out a continuous ‘noise’ transmission on multiple channels to provide continuous power to the device, while still allowing it to communicate, and apparently, without appreciable interference with data rates. As researcher Bryce Kellogg explains:

If we wanted to just blast as much power as we possibly can, that would kill your Wi-Fi, because you’d have power on the channel all the time. We optimized the router so that we can deliver what seems like, to the sensor, constant power without impacting your Wi-Fi too much. Instead of having continuous power on one of your Wi-Fi channels, we split it among your three non-overlapping Wi-Fi channels. That allows us to deliver about the same amount of power without impacting any one channel very much. 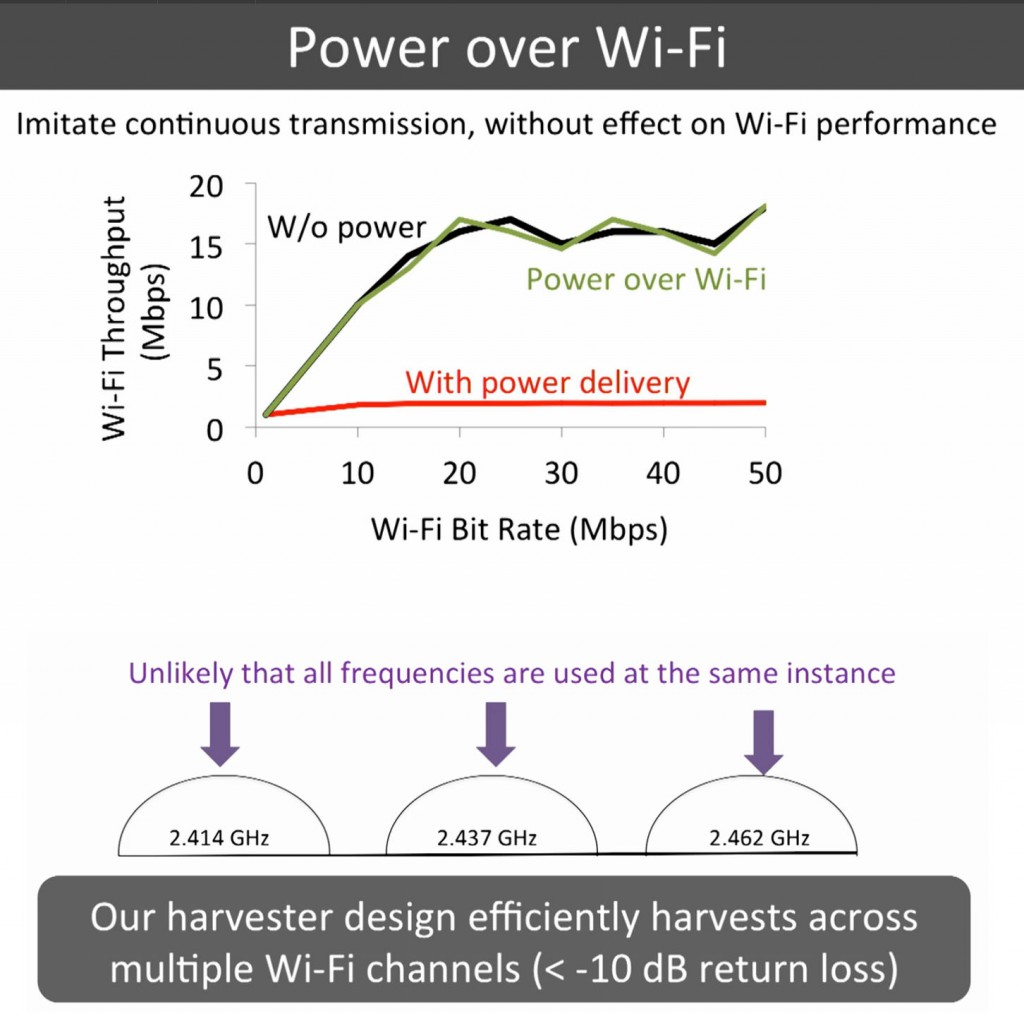 So far, the team has been able to power a sensor camera and a temperature sensor, in addition to recharging a small lithium-ion coin battery and a nickel metal hydride battery, with a current range of up to 28 feet of distance away from a router. 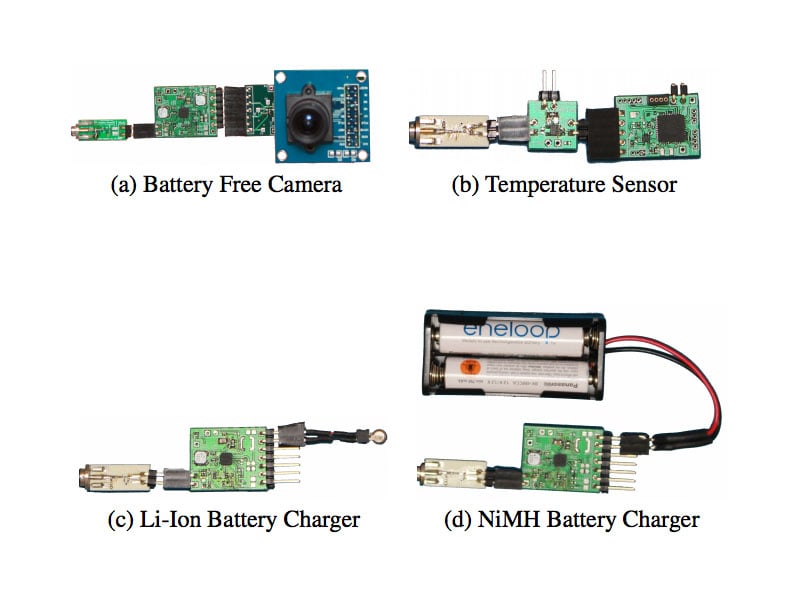 In another experiment, the team was able to transfer an offline payment between two prototype payment cards, using a television transmission tower 10 kilometers away to power the transaction. 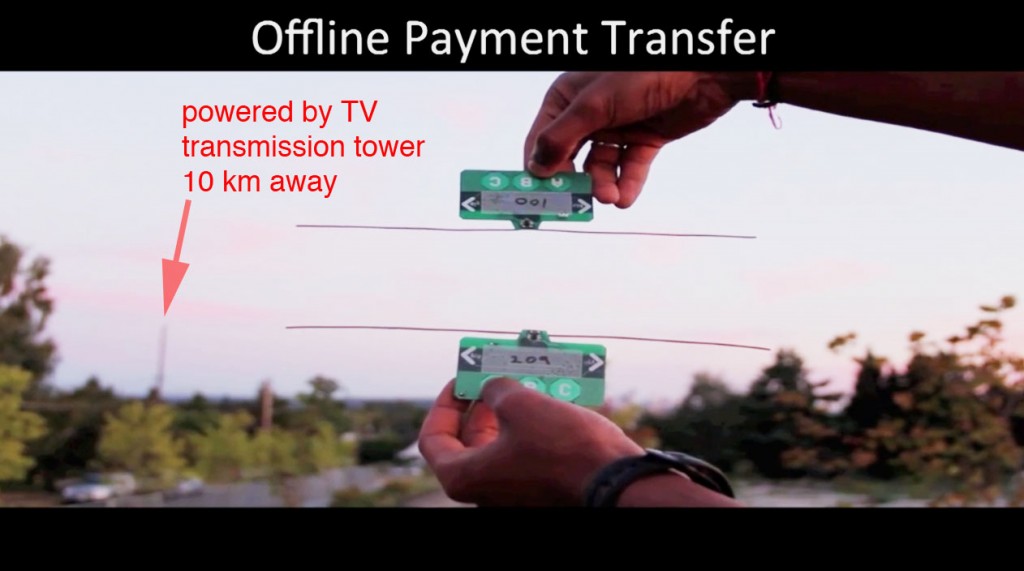 Since their previous experiments utilized a rather bulky 2dBi Wi-Fi antenna, they are now working on creating a smaller antenna (image of prototype below) that would be integrated within a phone’s microcontroller. 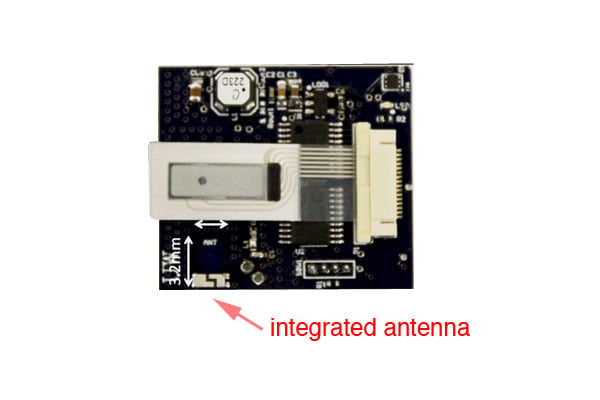 Beyond “Free” Power and Communication

While the team concedes that PoWi-Fi cannot yet meet the current power requirements of today’s smartphones, the use of ambient backscatter is something that designers could incorporate into tomorrow’s battery-free devices. In any case, the implications for this kind of technology would be staggering, to say the least. Ambient backscatter technology would enable “free” power and communication using an already existing and widespread Wi-Fi infrastructure, and would no doubt be a great boon in developing nations, where reliable grid electricity may be a problem.

It could go beyond mobile devices to be used someday in furniture and appliances: PoWiFi could deliver the energy needed to operate and process the data from a comprehensive Internet of Things, where sensors would no longer be dependent on batteries for power or to send information. With specially designed “Wi-Fi backscatter” tags, certain medical testing devices and procedures could become contactless and more affordable.

But as with RFID technology, PoWiFi could open the door to a whole host of security and privacy issues, from potentially invasive harvesting of data, secret surveillance, to an unmanageable flood of data exhaust. Despite these possible disadvantages, a future where powering and connecting devices is all done wirelessly could be overwhelmingly positive, making that elusive dream of so-called “free energy” a reality. Read more over at “Powering the Next Billion Devices with Wi-Fi” and watch the EmTech Digital talk.