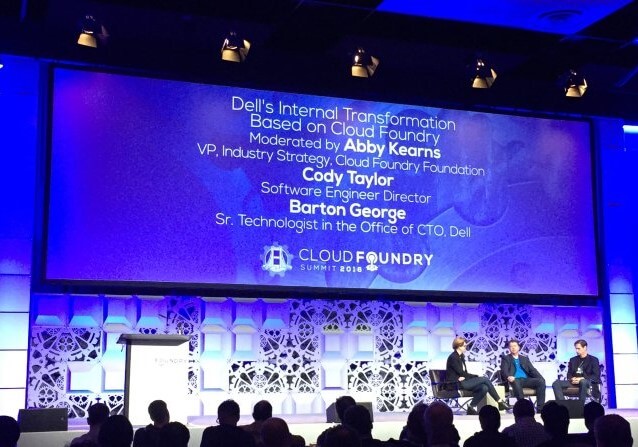 The entire PC industry is going through a tough time in the post-PC era. To respond, Dell has gone aggressive, going private, buying technology giant EMC (and VMware), and successfully fending attacks from Carl Icahn.

But the transformation at Dell is not happening only at the corporate level, at the infrastructure level within Dell as the company is moving to modern technologies. The company has always striven to keep operations lean, and now, with the help of Cloud Foundry, it is doing the same with its infrastructure.

So, Dell has embarked on an initiative to focus on improving its deployment process, with the aim of creating an end-to-end delivery cycle for its applications, explained Cody Taylor, Dell’s director of software engineering, before an audience at the Cloud Foundry Summit, taking place this week in Santa Clara, California, that

Taylor admitted that there were a lot of areas that needed improvement. “We started with the process side of the equation where we started structuring the teams, looking at the team’s, thinking about being more agile. We had some structural changes within the teams. We started looking at collocation; we started doing all of these agile like things that you read about or maybe you’ve already done.”

With more than 100,000 employees worldwide, Dell is a massive organization. So the company knew it would be a big job. It had more than 2,500 applications and thousands of developers.  Many of the apps were legacy one, some over 20 years old. They were running alongside many newer .Net apps and Java apps, which sprung up from various initiatives.

In short, it was a mess. Taylor admitted. “We learned that there’s really not a silver bullet or a single solution that would work, that would apply to all of these different teams,” he said.

“Last year I started developing some capabilities targeted at specific parts of the delivery cycle. For example, we started looking at making sure we had consistent build automation in place for each of our applications. We started looking at automation around provisioning of our servers, our infrastructure. We looked at a lot of test automation, we built frameworks around the functional regression end-to-end test automation. We also looked at deployment automation. We had a lot of successes there,” said Taylor.

The Elephant in the Room: Production

But the elephant in the room was that these were all individual capabilities, and Dell didn’t have an end-to-end solution for those. While Dell did make a lot of progress — in one case they were able to bring down the deployment time by 286 percent — the success was limited to development and staging environment. Production was still a distant summit to overcome.

Dell still carried the strategy that it could develop capabilities internally and accommodate whatever needs the organization had. But given the size of the company, it soon found that the internal solutions were not as scalable and flexible as they needed them to be. And that’s when Colby and his team started looking outside, at the open source world.

And the company found Cloud Foundry.

Dell signed Pivotal to help with the implementation. To see if Cloud Foundry offered the required flexibility, Dell set-up a formal Dojo — which is Cloud Foundry’s rapid training process — that lasted a few weeks. And Dell was happy with the outcome.

“We built three foundations, two of them on vSphere. One prod, one non-prod. We built an Azure instance out on the public cloud, and we’ve got a variety of different applications that we’ve deployed to these clouds,” said Taylor.

In a nutshell, Cloud Foundry was able to handle everything that Dell threw at it.

But moving to Cloud Foundry was not just about technology. It was as much about culture, mindset, talent and skills.

Taylor joked that Cloud Foundry is an opinionated platform, it requires specific things from your application. So now the company has 2,500 opinionated applications and thousands of opinionated developers.

On a serious note, Taylor said Cloud Foundry enforces consistency and standardization of the applications. The way that Dell developer thinks about work is slightly different now, he said. Now the developer can focus on development without having to focus on the platform.

That also changed the way Dell looked at skillsets.

Taylor is also involved with HR recruiting efforts at Dell, and he found that now there are students and candidates who have started asking them about their cloud technologies. “It’s definitely changing the talent and the dynamics of the organization that we have,” said Taylor.

While all of it eventually worked out well for Dell, something even more significant happened — something even Dell didn’t expect. Since now Dell has been through what most of its customers go through when they embrace digital transformation, it has gained experience and empathy for its customers.

“We ourselves have gone through it; we have a much more realistic understanding of what it’s about. I think the way to look at it is digital transformation is not waterfall,” said Barton George, an engineer in the office for Dell’s Chief Technology Officer.

And that is going to work in favor for Dell. While the company is acquiring massive technological strengths through EMC and VMware acquisition, this transformation has prepared Dell technologically, culturally and mentally to help customers in such transformation.

“That’s one thing that it helps us to understand when we go to our customers, that it isn’t a binary switch over to the new digital world. It’s coming in; it’s helping to address these cultural issues and getting people started and getting people iterating,” said George.