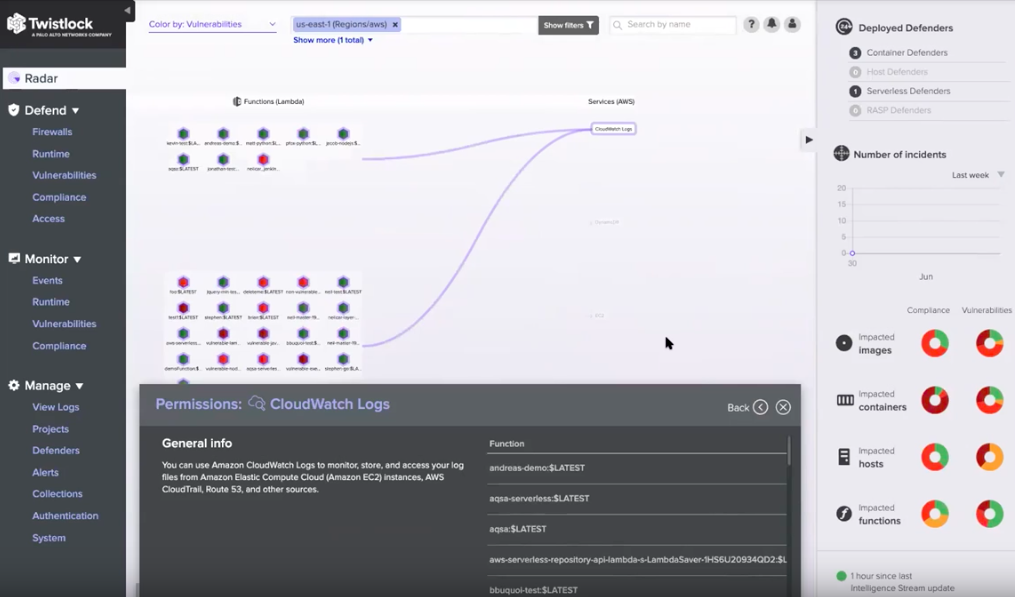 Twistlock continues to aggressively extend its security platform across most container and host environments. After launching new releases almost every quarter for the past 10 years, Twistlock’s 19.07 marks its 17th release. This time, Twistlock has expanded its reach to offer visibility into serverless platforms, to complement most multicloud environments.

In this demo podcast hosted by Alex Williams, founder and editor in chief of The New Stack, Keith Mokris, product marketing lead at Twistlock, said the Twistlock’s ongoing goal has been to “gather a lot of capabilities around real-time visibility across different areas of cloud native infrastructure.”

Specific to 19.07, this means the capability to visualize serverless in a new way in hybrid and multicloud environments, Mokris said.

“One of the things popping into a little bit is our serverless radar that complements what we already do today for containers and hosts. So being able to now visualize circle serverless applications in a new way, something really exciting for us here at network security in this new cloud native world.”

The serverless feature reflects a “key point” and of Twistlock’s previous releases by being able extend the range of the tool’s visibility to hybrid and multicloud environments in a “scalable and controllable way,” Mokris said.

Other new capabilities include trusted images, by being able to control what images and code developers can deploy into different environments. This is really “a key feature for security that allows them to go quickly,” Mokris said.

Mokris began the demonstration with an overview of the cloud native network firewall. “One of the things that if you’ve seen in Twistlock before is we’ve always highlighted this notion of real-time visibility, across all the network connections for all containers and hosts in your environment,” Mokris said, who proceeded to show an application analyzed with Twistlock on Kubernetes with Weaveworks Sock Shop, which offers a good window into studying how Kubernetes works. Mokris showed how Twistlock can automatically model the network topology of the application by observing its native behavior. “We can see how the frontend talks to the user’s service and then the user’s database,” Mokris said.

On a more holistic level 19.07, as well as with previous Twistlock releases, firewalls do not become obsolete when using Twistlock. “I think one of the questions we often get at conferences, is ‘does this mean that my perimeter firewall is going away?'” Mokris said “And that’s certainly not true — you definitely need to protect your perimeter. But when you’re using either Docker-, Kubernetes or other microservices-type tools, you need to also manage and secure the network layer of the application itself. So being able to do that, in a scalable way, is one of the biggest challenges that we see in these new architectures.”

The necessity is to offer security management capabilities of the network layer itself when there are, for example, tens of thousands of containers or hundreds of cloud native applications, Mokris said. “I really think that’s where being able to provide microsegmentation from one container to another or across hybrid environments is really something we’re going to see more and more of and certainly has been a focus here,” Mokris said.

While many organizations seek protection for Docker containers and Kubernetes, they often also have what Mokris described as “minimal straightforward use cases” and “it may really seem like a good avenue to…essentially, just kind of skip containers altogether and run their applications” on serverless, Mokris said. “And so, for these applications are great for event-driven computing and are really minimal,” Mokris said. “And we want to essentially tie all that together by being able to identify the vulnerability posture and then also provide one-time visibility action [for serverless as well].”