In this demo, we see a running environment of Rancher 2.2 with attached clusters. Clusters were spun up and a variety of workloads were created that show how an operator of the platform and the user of Kubernetes would interface with it.
Jun 21st, 2019 2:07pm by B. Cameron Gain 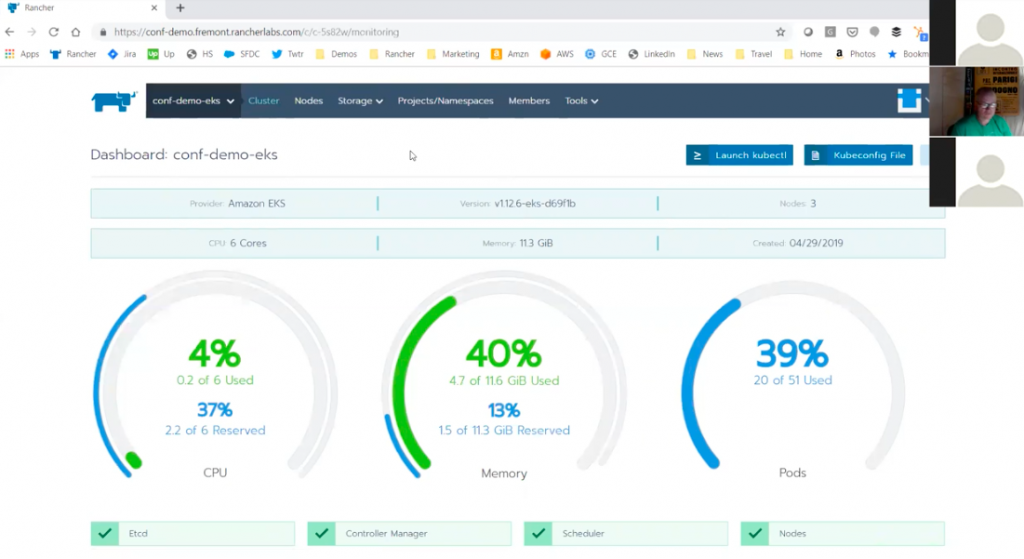 It became apparent in 2017 that the folks behind Rancher would need to embrace their software as the key container orchestration platform. At that time, Shannon Williams, co-founder and vice president of marketing and sales, Rancher Labs told us that Kubernetes “was even more feature-full than our own orchestration was then … We made the decision then to bet everything on Kubernetes with Rancher 2.0.”

Now, in 2019, Rancher has embraced Kubernetes that much more with the release of Rancher 2.2. “We were just saying how things have changed in 2015 — but maybe really not at all. Every day you figure there are new things, and yet, in so many ways, they’re just abstractions of things we’ve already done before, but they’re getting consolidated and easier to manage,” Williams said. “And it’s a fun time to be working with Kubernetes, containers and Docker. But it has been [fun] for the last four years — it’s been a blast.”

Last year, Williams said Rancher had about 8,000 daily active deployments for tens of thousands of clusters. Now, today, that number has exploded to about  25,000, representing a more than 200 percent increase since last year. “So it’s been a really, really crazy year — kind of matching the growth of Kubernetes,” Williams said.

In this demo, Shannon Williams and Adrian Goins — who is the director of technical marketing for Rancher —  showed and discussed a running environment of Rancher 2.2 with attached clusters. Clusters were spun up and a variety of workloads were created to show how an operator of the platform and the user of Kubernetes would interface with it, Williams said.

While Williams said it is possible to find all of the information on Rancher’s website, he began the demo by showing how when anyone accesses Rancher, access control is enforced. Administrators see all the clusters they administer, while users see only the clusters to which they have access.

Rancher is well-known for its user interface (UI). For the administer, that means using the UI to access “all that is happening at the global level,” Williams said. “We’re managing widely deployed applications, users access policies, security settings and the lifecycle — all of the day-two stuff people talk about that is handled at the cluster level,” Williams said. Most of the user’s time is actually spent working on the clusters they have access to, Williams said. On the infrastructure side, Goins described how Rancher as well as Kubernetes “let me do things that used to require switches and routers — this whole other layer of physical infrastructure.”

“And now it’s nothing to just send things up and move them around — the portability is fantastic,” Goins said. “The speed at which we’re able to do things is it’s phenomenal, whether it’s in prototyping stuff, testing stuff, bringing equipment or bringing container images down, testing out new things, or whether it’s rolling stuff out into production, scaling things up and down moving between providers — the flexibility that Kubernetes provides opens doors that we couldn’t access before,” Goins said.

The ultimate direction Rancher hopes to take is to remain “flexible in terms of what Kubernetes is,” Williams said. “Kubernetes is going to become very standardized,” Williams said, noting that Rancher’s customers run Kubernetes on a wide range of infrastructure, including on virtual machines and bare metal servers, in addition to the cloud.

“We want to be really flexible in terms of how you deploy these clusters, and then add a lot of value around them so that people can do a lot with it,” Williams said.

Alex Williams, founder and editor in chief of The New Stack, hosted this demo.

BC Gain’s obsession with computers began when he hacked a Space Invaders console to play all day for 25 cents at the local video arcade in the early 1980s. He then started writing code for very elementary games on the...
Read more from B. Cameron Gain
SHARE THIS STORY
RELATED STORIES
The Next Evolution of Virtualization Infrastructure WebAssembly Needs Schedulers, and Kubernetes Doesn't Quite Fit the Bill Acorn from the Eyes of a Docker Compose User Container Security: A Troubling Tale, but Hope on the Horizon Acorn, a Lightweight, Portable PaaS for Kubernetes
TNS owner Insight Partners is an investor in: The New Stack, Docker.
SHARE THIS STORY
RELATED STORIES
.NET 7 Simplifies Route from Code to Cloud for Developers Acorn from the Eyes of a Docker Compose User Acorn, a Lightweight, Portable PaaS for Kubernetes Tutorial: Deploy a Full-Stack Application to a Docker Swarm Securing Windows Workloads
THE NEW STACK UPDATE A newsletter digest of the week’s most important stories & analyses.
The New stack does not sell your information or share it with unaffiliated third parties. By continuing, you agree to our Terms of Use and Privacy Policy.