Deprecation from U2F API to WebAuthn

Google Chrome will no longer support U2F API after February, so we go into the weeds on how to migrate from U2F API to WebAuthn.
Jan 14th, 2022 9:13am by Richard Ma 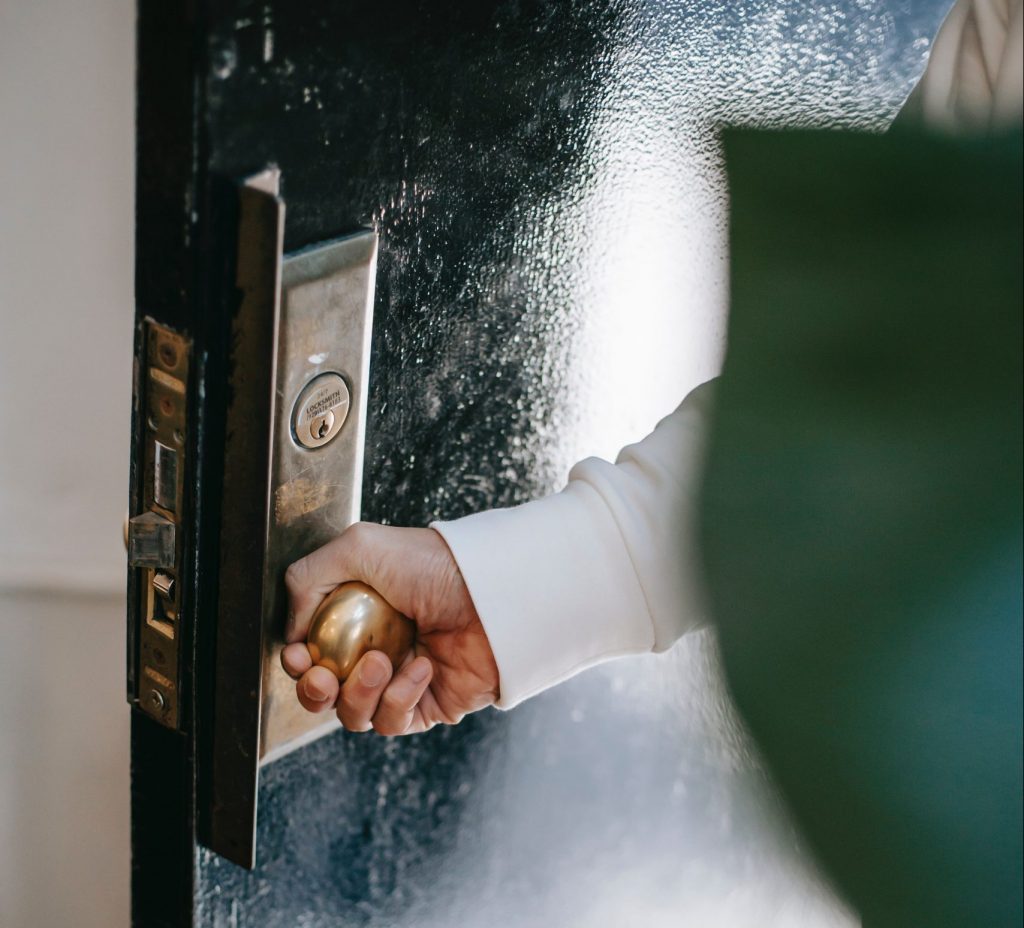 Photo by Charlotte May from Pexels
TNS Annual Reader Survey
We need your input! Take 5 minutes to chime in and help guide our coverage.
Begin the survey
Sentry sponsored this post.

If you’re using the U2F API for registration and authentication of your U2F devices, you will notice a dire situation is coming soon: Google Chrome will no longer support U2F API after February: 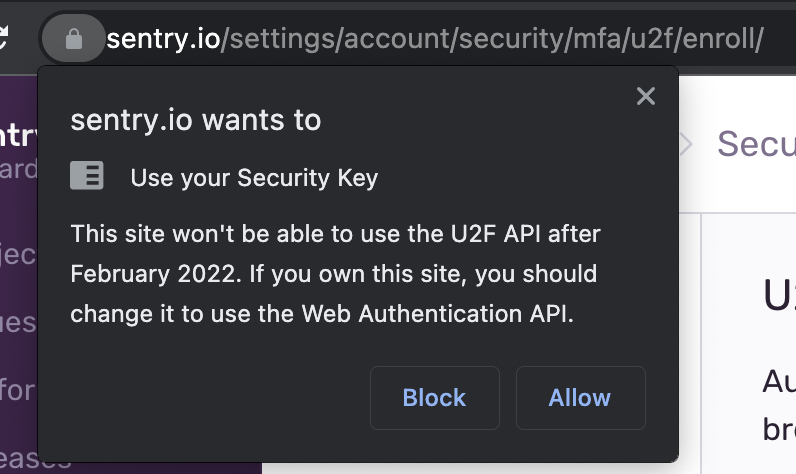 For anyone using U2F API in their web apps, like us at Sentry, their users who had 2FA enabled with U2F devices would not be able to sign in. To remedy this, there’s a shiny new specification written by the World Wide Web Consortium (W3C) and the Fast IDentity Online Alliance (FIDO) that will solve all our problems. In this blog post, we will go into the weeds on migrating from U2F API to WebAuthn.

WebAuthn is an API that allows web services to seamlessly integrate strong authentication into applications. 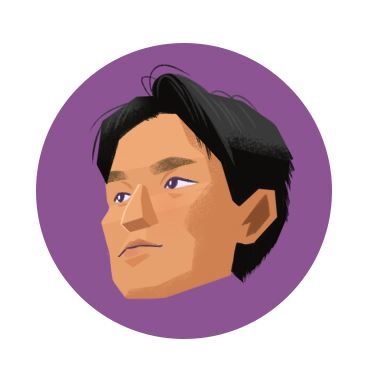 Richard Ma
Richard is a software engineer at Sentry and a collector of cool clothing.

With WebAuthn, web services can offer the user a choice of authenticators, such as security keys (Yubikeys, Titan Keys, for example) or built-in platform authenticators (biometric readers).

In addition, it is supported by all the leading browsers — including Safari, which U2F API was not — and web platforms, which standardizes the integration of strong authentication. You can read more on WebAuthn’s website.

Migrating to WebAuthn from U2F API

Now, here’s the part you’re all here for, the migration to WebAuthn. Let’s break this down into two main parts:

Let’s start with authentication so existing users can continue to log in. This is also important because newly registered WebAuthn devices can’t log in without a working WebAuthn login.

To understand the authentication flow, we can look at the following diagrams: 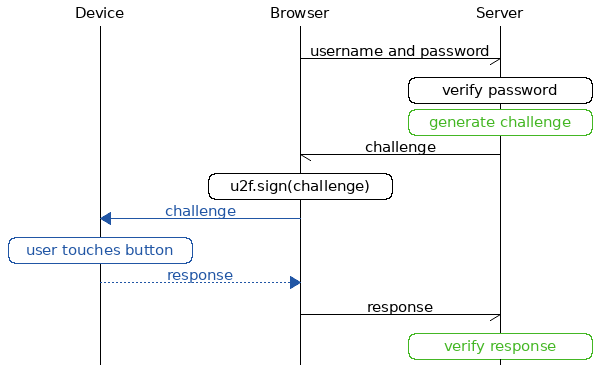 Let’s start with u2f.start_authentication(), which takes in the browser’s application ID and the currently registered devices.

The U2F API authentication process starts with the backend generating a challenge, an example of which is shown below:

This challenge is sent to the browser where u2f.sign() takes the challenge as an input and returns a promise that is the result of:

This creates a raw authentication request message and sends it to the U2F device. The result of the promise should look like this:

Once the result of the promise is sent to the server, we call U2f.complete_authentication() with the following two parameters: the original challenge data and the newly generated client data object passed in. This method will verify the device with the parameters and return the device info if it succeeded. From there, the server can allow the user to pass through the 2FA process.

Step 1: Generating the Challenge and State

To start the migration process, let’s first replace u2f.start_authentication() with its counterpart. The data types that the WebAuthn API takes are not quite the same ones used in U2F API. In fact, one of the main pain points was converting the necessary fields into the correct data type.

Your app_id will be the same value as before. The rp, or Relying Party, is an object that contains an ID, which is the hostname of the URL, and the name of your Relying Party.

The devices that are registered with WebAuthn have the type AuthenticatorData. For devices registered with U2F API, we need to create an AttestedCredentialData object for them to be compatible with WebAuthn. The following is the function we wrote that decodes the necessary parameters and creates the credential data:

With that, we can begin the registration process by calling register_begin() on the WebAuthn server that we created earlier, with credentials as its parameter. This will return a challenge and state.

The challenge is needed for the browser to perform authentication, but we will only use the PublicKey object within the challenge. In addition, you should store the state in your sessions, as it will be needed later.

We also encoded the challenge using the FIDO2 CBOR library, as we will be sending it to the frontend using JSON, which does not handle binary representation well on its own. On the frontend, we convert the JSON string back into a byte array and decode it to return the challenge to its original form.

To replaceu2f.sign(), we can call its WebAuthn equivalent navigator.credentials.get() with the challenge data. This library is now native to modern browsers, so don’t worry about importing any libraries.

For the final step, we can pass the original challenge and this new response to the backend. We need to create a list of credentials to validate the device, then call authenticate_complete on the authentication server that was made earlier with the following parameters:

If this function returns true, you are now fully authenticated and good to go!

For our deployment, this feature was behind a flag to manage the rollout and for error monitoring. (We recommend using Sentry 😉.) We deployed this feature independently from registration because the area of effect is limited in the event of an incident. Congrats! The authentication part of the migration is finished.

Similar to authentication, first, let’s take a look at the flow:

Similar to u2f.sign(), u2f.register() will take the previously generated results and return a promise that will look like the following if the device is registrable:

Along with the previously generated challenge, this result is sent to the backend where u2f.complete_registration() takes in both parameters and generates the following data object:

You can save this dictionary and name of the device. They will be used for authentication. Just like before, let’s replace u2f.begin_registration()with its counterpart. We need to create a FIDO2Server and import it from fido2.server. We don’t need to make it backward compatible, as all new devices will be registered with WebAuthn.

Step 1: Generating the PublicKeyCredentialRpEntity and State

We start with importing the fido2.webauthn library to create a PublicKeyCredentialRpEntity. To create the entity, we need to pass in the Relying Party’s ID and name. With the entity, we pass it into Fido2Server to set things up.

When the server is created, we can optionally pass in a list of registered devices to avoid duplicate registrations.

Next, we call register_begin() with:

You should get a result similar to this:

Set the state for later use in the session. Interestingly, the data from WebAuthn is exactly the same as from U2F API, despite looking different at first glance. WebAuthn sets the challenge in a byte array and the clientData in a COSE key object (which is a CBOR map), while U2F API uses an encoded string.

Once the registration data is received by the browser, we convert the string into a buffer and decode it with this library. This gives us the data that will be used as the input parameter of navigator.credentials.create():

When the promise from navigator.credentials.create() is resolved, we need to run it through getU2FResponse() before returning it to the server again.

We have reached the final step where we need to extract some data from the response from navigator.credentials.create(). The following are needed for register_complete():

With that, you can save the registered device data. The registration process is complete. Just like authentication, the deployment of this feature was behind a feature flag to manage the rollout. There were no database migrations needed as WebAuthn is backward compatible with U2F API.

With that, WebAuthn should be set up and you can purge U2F API from your codebase. If you have made it this far, we hope that this guide was useful to you. With some planning, you will make it in time before Chrome locks out users from your application. All the best!

Everything we do at Sentry is built in the open. Find us on GitHub.