‘Developer Nation’ Survey Will Reveal if You’re a Dragon Slayer 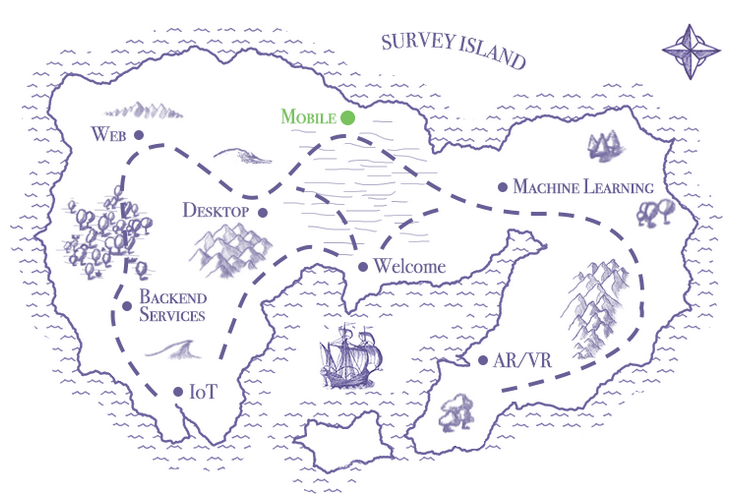 The analysts at London-based Visionmobile Ltd. are trying a new approach to drum up more participation with its latest “State of the Developer Nation” biannual survey on developer salaries, tools, and skill sets.

“I’m D’owl, the developer owl,” says a cartoon character on the site, “and I’ll be your guide in this adventure.”

“How do functions break up? They stop calling each other.”

“My software never has bugs. It just develops random features.”

“There are only 10 kinds of people in this world: those who know binary and those who don’t.”

“What’s the most used language in programming? Profanity.”

The analysts gush on their site that “This is a survey that’s actually fun!” And they’re promising one more exciting plot twist: “Once you complete it, you’ll get to find out what kind of character you’d be in a fantasy world, based on your responses: A mage? A bard? A dragon slayer? Take the survey and find out!”

When I took the survey, I was delighted to be designated as the Archmage of Codingdale.

“You’ve got the skills, you’ve got the knowledge — but you’re in it for fame and glory, not to make money…! Everyone turns to you for tips, ideas and guidance — your experience is an inspiration to others!” 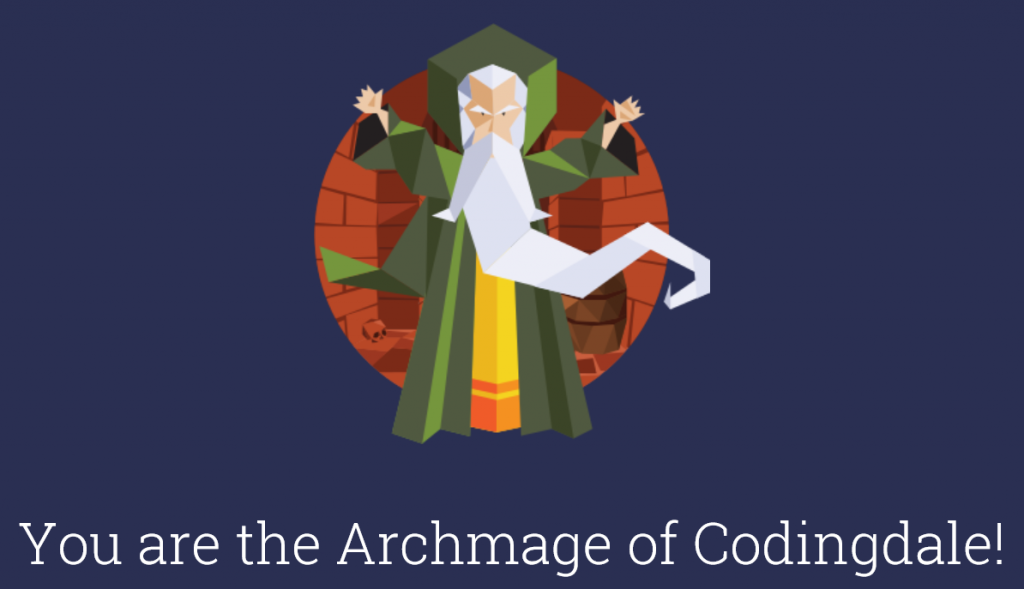 The author of this story is the Archmage of Codingdale

Like a geek horoscope, it was positive and affirming, and it was also loosely based on the answers I’d given. Survey-takers are assigned one of 16 different characters — everything from the “Alchemist of the Open Source Cauldron” to “Minstrel of the Singing IDE”. There’s some fictitious locations, too — just ask the “High Druid of Software Forest” or the “Ranger of Codewood Forest.”

But there’s also recognition for chivalrous service to the world of free software, with designations like “Alchemist of the Open Source Cauldron” and a “Paladin of the Open Code.”

The final report will be released in February, and participants will also receive a customized report letting them know how their responses compared to other participants.

It’s all part of a research program called “Developer Economics” that aspires to provide actionable information geeks need to make better business decisions. VisionMobile says it’s reached over 30,000 developers each year, in over 150 countries — more than 3/4 of all the countries in the world. Though its website points out it’s a twice-yearly survey where it reaches out to 15,000 developers twice a year, citing 60 different outreach channels designed to generate results “not biased towards the mindset of any single community”.

The survey is offered in nine different languages, and the company is also trying to partner with both big and small organizations — including local Meetups around the world — to try to sample a broad cross-section of the whole developer community. And the company also has a panel of 22,000 developers, from more than 110 countries.

There’s also Media Partners — “important pillars in our outreach to the global developer community” — which include Microsoft, Intel, Amazon, Google Developers, and Sitepoint. at the “Diamond” level, and eight more at the “Platinum” level, including Mozilla, Ubuntu, and The Linux Foundation. But of course, a big part of the whole project involves getting lots of geeks to fill out their surveys.

Which is where that talking owl comes in… 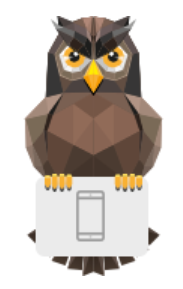 And also, prizes. Any developer completing the survey is automatically entered in the January prize-drawing, where there’s 18 “Mega Prizes” — including two Microsoft Surface Pro 3 touchscreen tablets, a Google Pixel smartphone, an Oculus Rift headset, and an Apple Watch. Some of the other prizes involve online education, including five Udemy vouchers, three licenses to Frontend Masters, three “Premium”-level memberships for Sitepoint, and an enrollment in MIT’s online course “Data Science: Data to Insights.” And at least four of the prizes are passes for upcoming tech conferences.

Of course, the odds of winning a prize go up if you complete more surveys from the different “kingdoms” of development. I counted at least 44 prizes in all — plus another 30 stickers being given away by DevStickers.com. “We carefully choose prizes to be of interest only to developers,” explain VisionMobile’s company website, “so that we don’t attract non-developers to our surveys.”

In addition, dozens of people are sharing the URL for the survey with a special “referrer” code, in hopes of claiming another prize — bitcoins. Whoever refers the most survey-completing developers will win two bitcoins — with a cash value over $1400 — while the next two top referrers will each win one bitcoin. And there’s still 18 more smaller bitcoin — half a bitcoin for whoever finishes between 4th and 7th place, and one-eighth of a bitcoin for the next 14 (Disclosure: I currently am on the leaderboard for my own referrals, prior to the posting of this article). 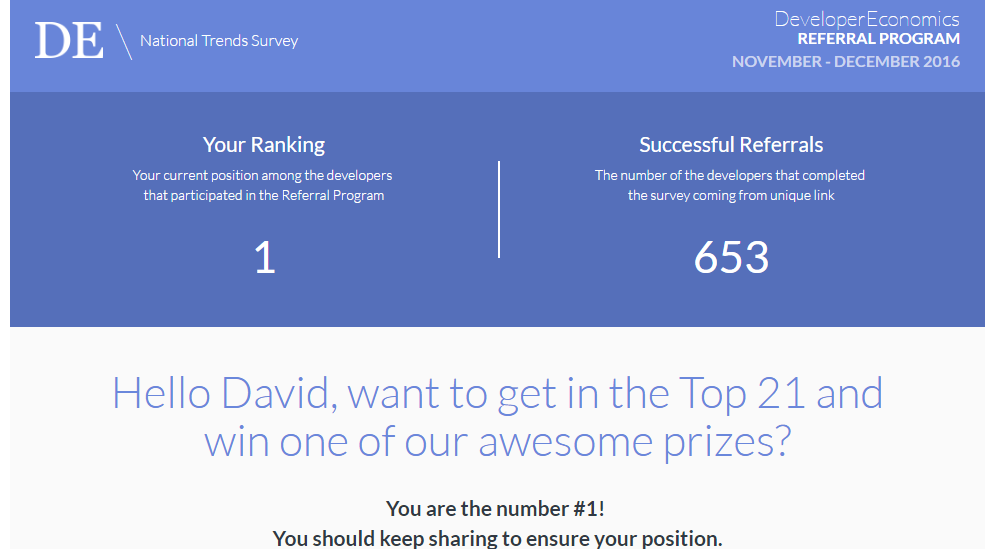 Most developers “have a good laugh with the memes we include every few pages,” according to the company’s website.

But they’re dead serious about surveying developers in all seven “kingdoms.” “We believe that software is eating the world and we are committed to exploring this fascinating phenomenon in all its expressions across the several different types of development.”

Of course, they’re also selling some reports — their Cloud Developer Population Forecast for 2017 will cost you $2,900. But participants in the “State of the Developer Nation” survey will receive their customized results report free.

And this week The Linux Foundation shared some interesting results from last year’s survey. 47 percent of professional developers who responded considered Android their primary platform. And 48 percent of IoT developers were targeting Smart Home — making it the fastest-growing platform, rising 6 percent from the year before.

VisionMobile’s site is collecting responses through December 23rd. And then in January, the company starts giving out those prizes. But the site is already displaying enthusiastic comments from past takers of their surveys.

“I’m always happy to help the profession and it’s nice to get something back like this!” And another participant seemed particularly taken by the playful web design.

“This was the first time I had fun completing a survey!”

The New Stack is a wholly owned subsidiary of Insight Partners, an investor in the following companies mentioned in this article: Island, Udemy.