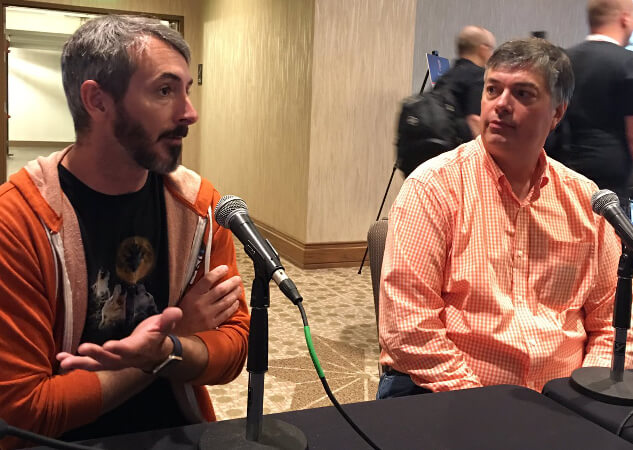 As DevOps has come into its own, IT automation companies such as Chef have made automating and managing release pipelines simpler. At ChefConf 2016, Chef announced new tools which include Chef Automate, which pulls together all of Chef’s IT automation tools in one package. How DevOps teams communicate with others in their business has also changed with the rise of tools such as Slack, HipChat, and processes such as ChatOps.

In this episode of The New Stack Makers podcast embedded below, we explore how Chef Automate and ChatOps enable DevOps teams to work more efficiently, the ways in which agile development practices have shaped DevOps, and how the culture of DevOps has evolved as the ways in which businesses use software has changed. Electric Cloud Chief Technology Officer Anders Wallgren and ChatOps software provider VictorOps DevOps evangelist Jason Hand spoke with TNS consulting engineer Lee Calcote and TNS managing editor Joab Jackson at ChefConf 2016 for this podcast

Hand explained that while Chef Habitat was the talk of the event, it was Chef Automate that stole the show for VictorOps. As a real-time incident management and infrastructure timeline, Chef Automate’s workflow visibility features are of particular interest. “We can help make sense of that, and provide more context to give the person that’s on call, everything that they would need to respond and do something about it right now. That’s one of the big conversations of DevOps is reducing the time it takes to repair a problem,” Hand said.

For Wallgren, it is the variety of integrations that Chef offers are crucial to Electric Cloud’s customers. As Electric Cloud is run on-premise on AWS or RackSpace stacks, Wallgren noted that “There’s a lot of custom, homegrown systems that we have to work with. Often because you couldn’t buy or open-source this stuff ten years ago. People built it, and those things are still around.”

As businesses have shifted how they view and utilize software in their own stacks, DevOps has seen changes. While agile software development practices have been in place for creating applications at scale, the agile movement has seen less of an adoption in the DevOps community. Wallgren offered particular reasoning to this, “I see agile as kind of the last mile in terms of what we’re doing in the industry.”

Hand went on to explain that the term DevOps itself sprang from taking the concept of agile software development and applying it to infrastructure. As such, it was agile that brought DevOps to where it was today. Wallgren summarized with a strong closing statement in regards to software which many in DevOps may find resonant,

“For so many years, one of the biggest problems with software was that we’re trying to fit ten pounds of crap in a five-pound crap bucket.”

SHARE THIS STORY
RELATED STORIES
What Good Security Looks Like in a Cloudy World Record, Connect and Search DevOps Changes with Kosli Why You Can’t Afford to Miss Data Decisions Kubernetes Just Has to Get Easier for Developers Case Study: How BOK Financial Managed Its Cloud Migration
SHARE THIS STORY
RELATED STORIES
Record, Connect and Search DevOps Changes with Kosli Unleashing Git for the Game Development Industry How to Find and Solve Engineering Bottlenecks Does the GitOps Emperor Have No Clothes? New Ebook: A Blueprint for Supply Chain Security
THE NEW STACK UPDATE A newsletter digest of the week’s most important stories & analyses.
The New stack does not sell your information or share it with unaffiliated third parties. By continuing, you agree to our Terms of Use and Privacy Policy.