The core theme of Cloudbees’ DevOps World 2020 was accelerated resiliency. This idea broke down into three buckets: everything automated, everything connected, and everything resilient. However immediately some talks stood out against automating everything, at least as the first recourse.
Oct 9th, 2020 6:00am by Jennifer Riggins 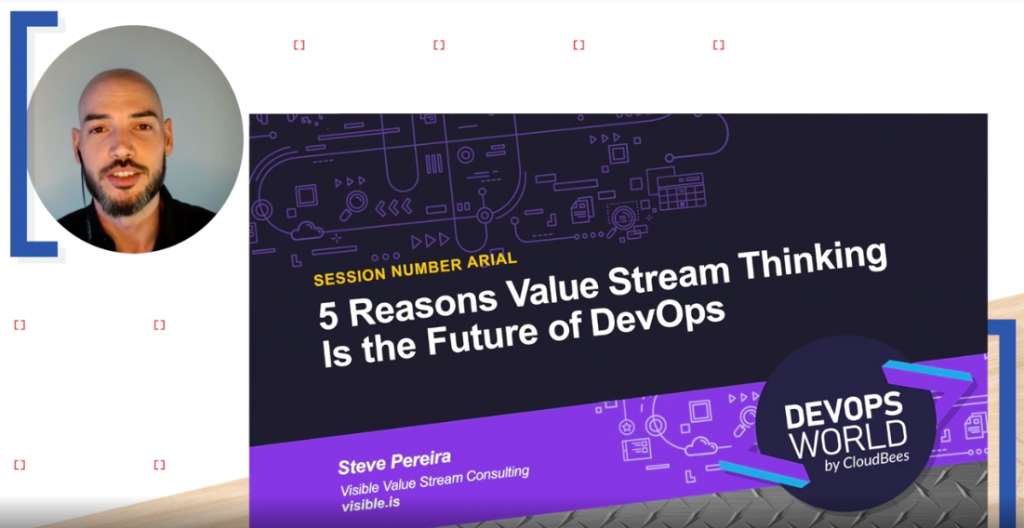 Is DevOps synonymous with automation? Or are we focusing too much on automation at the expense of actual value delivery?

The core theme of Cloudbees’ DevOps World 2020 was accelerated resiliency. This idea broke down into three buckets: everything automated, everything connected, and everything resilient. However, immediately some talks stood out against automating everything, at least as the first recourse.

Two interesting talks that focused on DevOps delivering value before automation were given by Steve Pereira, head of Visible Value Stream Consulting, on value stream mapping, and Jayne Groll, CEO of the DevOps Institute, on hybrid product teams. Both talks went beyond continuous delivery and integration pipelines toward understanding where the value flows.

As usual with all cultural and agile perspectives, the value is found with the people.

52% of the 1,300 respondents said #DevOps journey is difficult. (I assume the others hadn’t tried yet or are doing it wrong. It’s hard.)

And the whole thing is hard as people rated the challenges of People, Processes, and Tech equally. pic.twitter.com/3hiszLJ0Mb

Pereira kicks off his talk offering two key questions that are challenging in the context of DevOps and must be talked about as a team:

The first is analogous to a compass and where your team is headed, while the latter he says is more of a map of the environment.

While DevOps has gone a long way in more than a decade since its inception, particularly in terms of automation, scaling and collaboration. However, Pereira still points to the enduring or even increasing pain points of:

“Fifty percent of your features are never used. So all of our automation and all of our scale and all of our ability to deliver may be just going to waste if nobody’s using our features. That can mean that we have to deliver twice as fast or twice as much in order to have the same effect that we’re hoping for when it comes to our customers.” — Steve Pereira, Visible

He argues that, in order to drive better outcomes, we have to always frame DevOps in terms of customers, regardless if our customers are internal or external. And increasing automation inherently increases complexity.

Pereira calls for value stream thinking to layer on top of DevOps for a different perspective, echoing Toyota car manufacturing in the 1960s.

Pereira clarified: “Not to make the process of building software robotic, but to allow us to focus as much creative time that we can by automating the things that are repetitive and that are wasteful and unnecessary and not valuable.”

Perhaps part of the problem is that the effect of DevOps has outgrown its title, which risks creating its own silo. Nowadays, DevOps encompasses way more than software development and operations, like security, testing and even customer support. To some, DevOps focuses on individuals, while to others, teams, and while for others it must go across organizations to include human resources, compliance, and more. Add to that, there seems to be a tug-of-war between those that see DevOps as mostly about collaboration and those that view it as all automation.

Pereira says it’s really valuable for us to talk about DevOps flow, which he argues is best seen in terms of a value stream paradigm, a visual translator for everyone to speak the same language.

He says a lot of people get stuck on the CI/CD pipeline (code and deploy) and the opportunity comes with focusing on before (ticket) and after (enablement.) He added the visual idea of a stream, which is filled with impediments from pebbles to sticks to frogs to fish and inevitably connects to other streams. It’s never just about pipelines connecting to pipelines, but this complexity includes teams, behaviors, culture and manual activities that may impede flow and speed. You could be neglecting the velocity of interrelated things, like marketing, documentation, and approvals.

“In the big picture of our customer getting value, can we really say that we are performing well?” — Steve Pereira, Visible

Ask yourself: What are small changes that could “micro-optimize” the upstream and downstream, not just the CI/CD pipeline? How do we integrate all those other activities as part of a value stream?

Next Pereira says you need to both zoom out to look at the full stream and then to zoom in deeper to find the cause and cost of different bottlenecks.

“What’s universally consistent in every single case is that, upon drawing the map, we can identify where the big problems are. And that leads us to these easy actions,” he said.

He says just stopping to do a couple things immediately can make a massive difference, often cutting 20% of waste.

How do you measure your flow and its value? Pereira says start with how long things are taking.

He says a good starting point is Google’s four key DevOps metrics, layering them atop your value stream, like above:

As you see below, Pereira starts with just steps and timing, and then layers on more detail. Steps one and two are taking notably longer than anything else — hours versus minutes. And the two tightest bottlenecks have nothing to do with automation.

Pereira said the example was from a real client, and “It saved us millions of dollars that we were going to dedicate towards something like automated deployment. You go down the road, set this all up, and it wouldn’t really make a difference in terms of the bottom line, in terms of moving the needle.”

Value stream mapping becomes a tool in both alignment and collaboration, where all levels of business share the same vision.

“Once we have the data, once we have the visualization, we can have those conversations. We can move forward with confidence and be aligned and on the same page.” — Steve Pereira, Visible

Finally, value stream management helps organizations prioritize where to automate next. Following this, his client Nationwide Building Society went from a three-year to a three-month release cycle, within a year.

But if it’s not just automating everything, we can’t forget how much human beings are still involved in the DevOps lifecycle.

From T to E: Building a Hybrid Product Team

Last March, the DevOps Institute released the 2020 DevOps Upskilling Report, which talks about what skills are most in-demand among DevOps teams.  Now that the vast majority of teams are working distributed in times of stress, it only seems to amplify the results. Groll said the survey specifically pointed to a talent gap for “DevOps humans.”

With this in mind, she recommends the creation of hybrid product teams which stretch across value streams and are made up of cross-organizational and multiskilled individuals. The success of these autonomous, self-regulating teams is measured on understanding and delivering customer value. 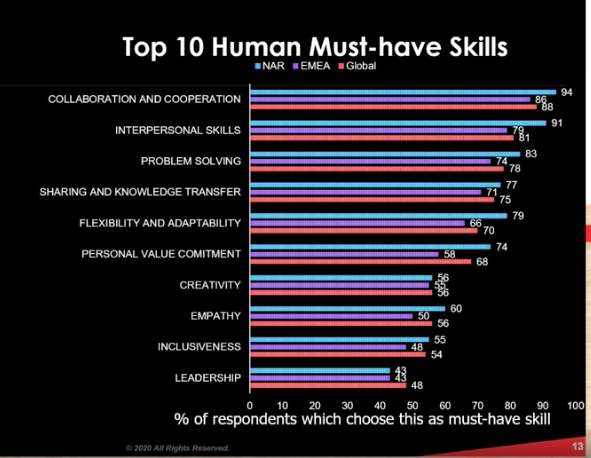 Groll argues that there is a mandate for a culture shift toward servant leaders that only guide transformations, not direct them. These self-regulating teams are given work, but it’s up to them to decide how and when to deliver it.

It’s been shown that culture is a differentiator in DevOps in terms of which organizations are successful or not.” — Jayne Groll, DevOps Institute

After all, as Groll said, “Intelligent automation is based on intelligent process.”

Pivoting dramatically away from the agile industry of frameworks and certifications, she says source control, testing and critical thinking are important to increasing value flow, but that process isn’t loyal to a single body of knowledge, like Scrum, SAFe or LeSS. 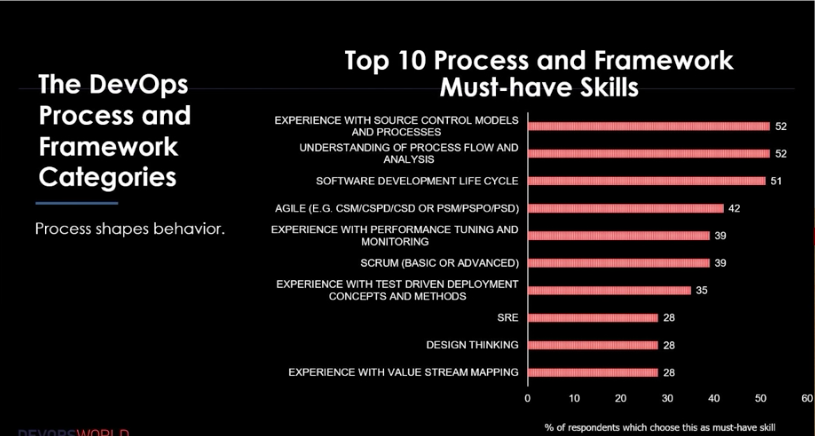 Agile is going on 20 years, while DevOps has about 11. Groll says they both are very focused on pre-production, while the future of software delivery is based on post-production. Namely, the growth in site reliability engineering (SRE) adoption has been rapid over the last year or two, which in turn opens up not just the Dev and Ops but the security part of DevSecOps to everyone’s participation.

Finally, there are the in-demand technical skills that all members of the hybrid product team should have some experience with. They prove that, while the value stream is essential, the CI/CD pipeline is still dominating. In fact, while cloud dominated the last couple surveys, CI/CD flew to the top of the list this year. 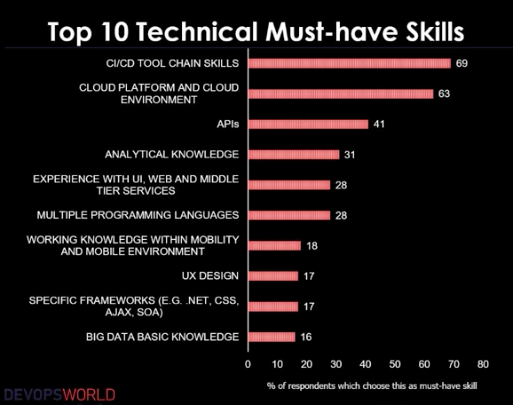 In the end, the DevOps Institute makes a strong pivot with this year’s recommendations toward the hybrid side of value-focused product teams. They are going from a call for T-shaped deep-dives into specializations to E-shaped broad human skills, a keen grasp of processes, and a plan to automate more.

In the end, it’s important to remember complex humans are what make excellent software that actually delivers value.

Respond to the Survey for the Enterprise DevOps Skills 2021 Report now.

Jennifer Riggins is a culture side of tech storyteller, journalist, writer, and event and podcast host, helping to share the stories where culture and technology collide and to translate the impact of the tech we are building. She has been...
Read more from Jennifer Riggins
SHARE THIS STORY
RELATED STORIES
Engineering Best Practices of CI Pipelines Kubernetes CI/CD Pipelines Explained Coherence Strives to Streamline Cloud Developer Experience An Inside Look at What GitLab’s Web IDE Offers Developers Kubescape: A CNCF Sandbox Platform for All Kubernetes Security
SHARE THIS STORY
RELATED STORIES
Interest Growing in Dart and Flutter for Mobile Argo CD and Flux Are CNCF Grads: But What Now? Coherence Strives to Streamline Cloud Developer Experience Top 5 Considerations for Better Security in Your CI/CD Pipeline Enriching Dev Experience with Speedy Continuous Integration
THE NEW STACK UPDATE A newsletter digest of the week’s most important stories & analyses.
The New stack does not sell your information or share it with unaffiliated third parties. By continuing, you agree to our Terms of Use and Privacy Policy.