Devs Are Excited by ActivityPub, Open Protocol for Mastodon

Developer interest in ActivityPub, the open protocol behind Mastodon, has been sparked as Twitter turmoil continues. Is this a tipping point?
Nov 15th, 2022 10:19am by Richard MacManus 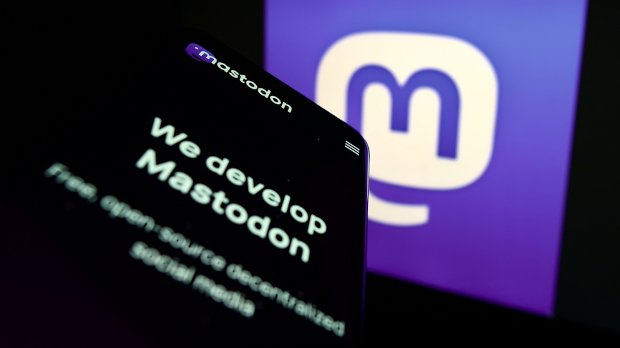 “It’s happening,” blogged Evan Prodromou, whose pioneering work inspired the ActivityPub protocol on which Mastodon runs. “I have not been this excited about federated social networks since we published ActivityPub,” he wrote. “The shift has started.”

He’s referring, of course, to the migration of hundreds of thousands of users from Twitter, a centralized social media application now controlled by Elon Musk, onto Mastodon and other ActivityPub-powered decentralized applications. While this migration is still in its early stages, developer interest in the so-called fediverse has soared in the last couple of weeks — and if there’s one historical fact about the web worth noting, it’s that developers are usually at the forefront of paradigm shifts.

In a post on Mastodon, Christine Lemmer-Webber, the co-editor of the W3C specification for ActivityPub, wrote that “a lot of people contributed to ActivityPub,” but she listed Prodromou first in her list of key contributors. She said that Prodromou “designed the core protocol,” based on his “experiences co-authoring OStatus, ActivityPub’s predecessor.”

There are signs that ActivityPub may become a significant new internet protocol post-Musk Twitter, so let’s dig into the details and see how Mastodon in particular is using it.

ActivityPub is a decentralized social networking protocol that began in 2016 and is supported by the World Wide Web Consortium (W3C). It’s the main protocol of the fediverse, which is an evolving set of decentralized applications and websites that are starting to challenge the hegemony of centralized services like Twitter.

ActivityPub comprises two layers: a client-to-server protocol “for creating, updating and deleting content” and a server-to-server federation protocol “for delivering notifications and subscribing to content.”

Another important concept for ActivityPub is that a user is represented by one or more “actors,” which represent their accounts on different servers. So if you have two Mastodon accounts and one BookWyrm account (a decentralized Goodreads alternative) across three different servers, then you have three actors.

In a presentation about ActivityPub in April 2021, Lemmer-Webber explained that it was a group effort to bring together various existing protocols. “Around the time that we started the standardization work, there were all of these different protocols,” she said, “and there were a lot of different applications that spoke them, but very few of them could speak to each other.” 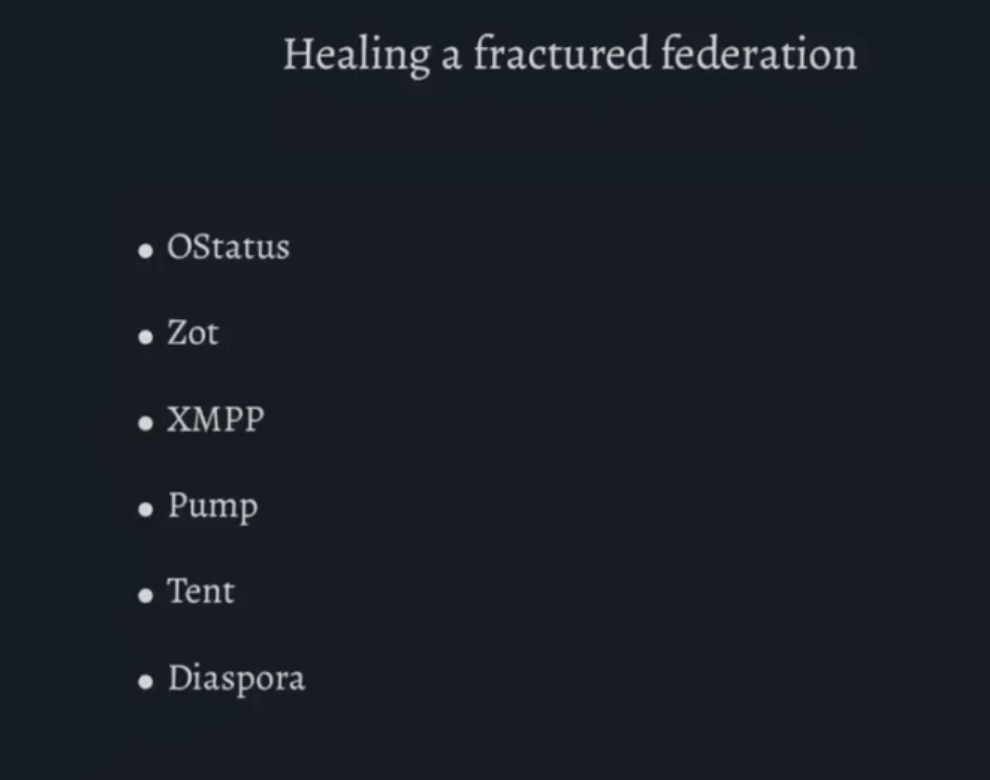 The first time I signed up to Mastodon, it ran on OStatus rather than ActivityPub. I signed up in April 2017 and wrote up my early Mastodon experiences in a June 2017 post. I noted its relative inactivity compared to Twitter, but also its potential to be an effective “meld between Reddit and Twitter,” with the community features of the former and the micro-blogging functionality of the latter.

So when did Mastodon switch to ActivityPub? It was September 2017, when Rochko announced Mastodon v1.6, “the first Mastodon release which fully implements the ActivityPub protocol.” Several months later, in January 2018, ActivityPub became a W3C recommended standard.

So Is This a Tipping Point?

Many early adopters (myself included) experimented with Mastodon and other Fediverse apps in the 2017/18 timeframe, but the tipping point didn’t arrive then. Partly that’s because a new shiny decentralized object appeared and bedazzled many in the tech industry: blockchain. The crypto craze, rebranded as “Web3” last year by an influential VC firm, seemed to usurp the fediverse as the new face of the web.

But even though Web3 had its moment in the sun and attention on the fediverse dropped away, the true believers continued to work on the ActivityPub protocol and associated apps. This year we’ve seen Web3 take a big step backward and, thanks to Elon Musk, the fediverse become an attractive proposition once more. As Evan Prodromou said, it’s happening… again.

While Mastodon’s active user count still pales in comparison with Twitter, I have noticed many in the developer community joining the fediverse in recent weeks. Simon Willison, co-creator of the backend web development framework Django is one example. He joined Mastodon on Nov. 2, and currently has 6,300 followers (he has 43,200 on Twitter — but if Musk was correct pre-acquisition, there must be a bunch of bots in there!). So that’s around 15% of his audience that has migrated to Mastodon, after just a couple of weeks. Another developer, Molly White (who runs the “Web3 is going just great” website) has 22,000 Mastodon followers compared to 88,800 on Twitter — 25%! Again, developers are the leading edge of where things are headed. 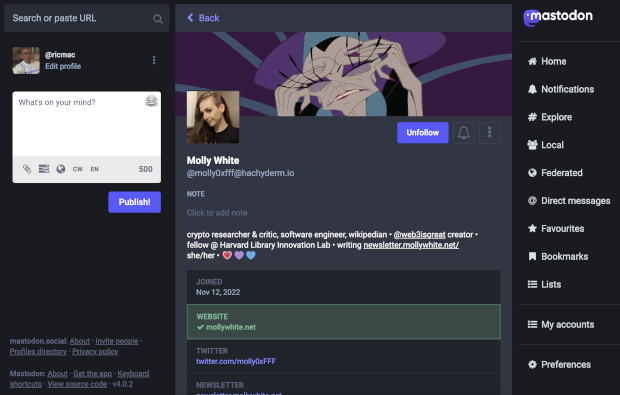 What this renewed interest in the fediverse also means is the first true test of scale for ActivityPub. Twitter famously had scaling issues in its early days, so I expect that to happen with Mastodon too — and indeed Aral Balkan has already raised some concerns about the number of Sidekiq jobs required for a mega-popular user like Stephen Fry (who already has 56,000 Mastodon followers).

But the fact that people can easily create new “instances” (aka servers) for Mastodon would suggest that this can be overcome — it’s the key benefit of decentralization, after all. And if you don’t believe me, take the word of Blaine Cook, one of the founding engineers of Twitter in 2006. “I’m really not worried about Mastodon scaling issues at all,” he said (on Mastodon), adding that “these problems are solvable and I have no doubt will be fixed soon.”

Finally, it’s worth noting that ActivityPub was designed from the get-go to be interoperable and extensible, so that anyone can build on it. Which brings up an interesting point: why did Twitter’s then-CEO Jack Dorsey decide to create a brand new protocol for Twitter-like apps in late 2019, under the guise of a non-profit organization called BlueSky, rather than simply extend ActivityPub? In a word: control. As the person behind the Mastodon Twitter account archly noted, “this is the building of a protocol that Twitter gets to control, like Google controls Android.”

At the time, Twitter ignoring an existing open standard didn’t necessarily ring alarm bells — after all, @jack said he was an advocate of open protocols. But now that Elon Musk is in charge of Twitter and has seemingly fired all of Twitter’s developer platform team, those alarm bells are ringing at a deafening volume.

The solution, of course, is for developers to get behind ActivityPub and make it the default open protocol for public conversation. I encourage devs to check out the spec and hop onto Mastodon to see what all the fuss is about (I’ll hopefully see you there).

Richard MacManus is a Senior Editor at The New Stack and writes about web and application development trends. Previously he founded ReadWriteWeb in 2003 and built it into one of the world’s most influential technology news sites. From the early...
Read more from Richard MacManus
SHARE THIS STORY
RELATED STORIES
Jamstack Panel: Multiple JavaScript Frameworks Are a Good Thing Developers Get a Quick-Start to Coding with Replit IDE How Instagram Prepared for High Definition Video Twitter Turmoil: We Need an Open Protocol for Public Discourse Accessibility Is Just Another Functional Test
SHARE THIS STORY
RELATED STORIES
How Instagram Prepared for High Definition Video How to Build Your Own Decentralized Twitter Cloud Lessons to Help Developers Improve ESG Impact Microsoft Aims to Bring DevOps Discipline to Web3 Augmented Reality Is the New Frontier — Time to Get Serious about Standards
THE NEW STACK UPDATE A newsletter digest of the week’s most important stories & analyses.
The New stack does not sell your information or share it with unaffiliated third parties. By continuing, you agree to our Terms of Use and Privacy Policy.