Digital Psychometrics: So Much Potential for Good, and for Harm 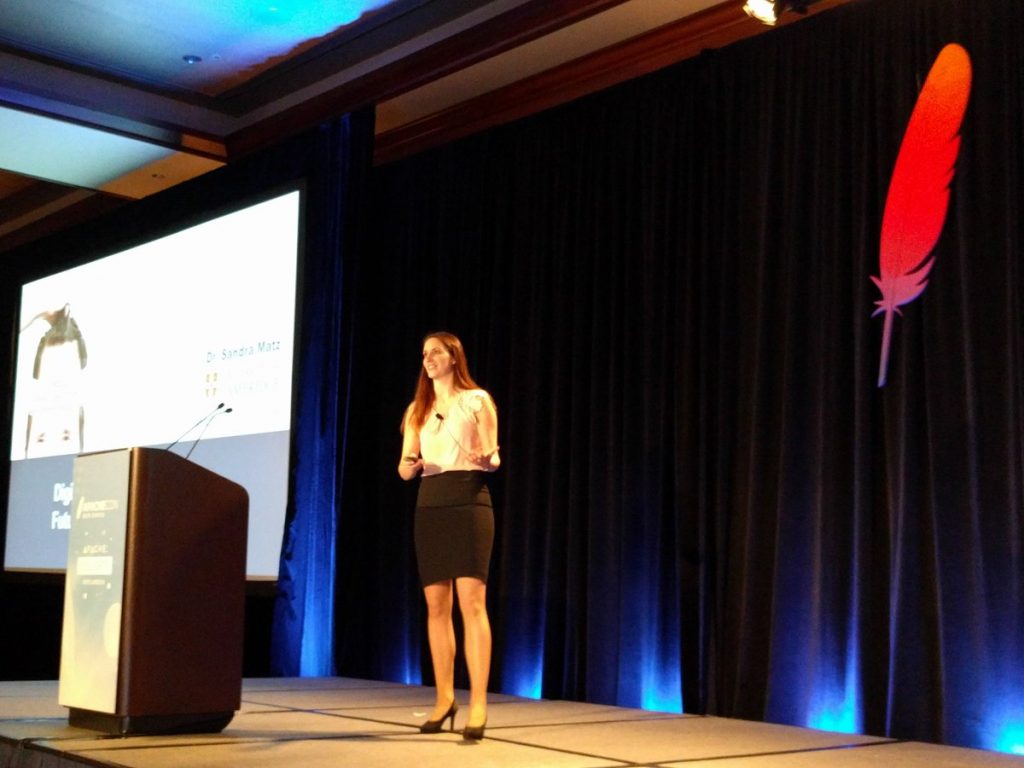 It’s hard to determine the veracity of stories swirling around that the campaign for then U.S. presidential candidate Donald Trump used social media profiling to target ads to would-be voters, ultimately swaying the U.S. presidential election.

But more data is being collected about people every day, and that information can be used to more effectively target marketing and personalize healthcare and education, argued Sandra Metz, a computational social scientist at Cambridge University, at the ApacheCon North America being held in Miami this week.

However, it brings a greater level of responsibility to ensure the information is used to improve people’s lives, rather than target them for exploitation, she said, pointing to a story about how the study of teens’ use of social media could help identify those at risk of depression.

She described work that began with the myPersonality Facebook application that allowed users to take real psychometric tests. More than 7 million people did, and about half of them agreed to share their results, including Facebook likes, for research.

Those tests delved into things like personality, values, life satisfaction and impulsivity.

It has evolved into a personalization engine called ApplyMagicSauce.com from the University of Cambridge Psychometrics Centre as a tool to predict future behavior of users. It uses algorithms to compare responses with specified groups.

2/If I were to analyze my Twitter profile, it would likely be #greybeard yells at cloud. (And Cloud don't care.) #apachebigdata #ApacheCon

Matz: In a test of digital ads based on digital psychometrics, saw 1.5x higher conversions and 60% higher ROI. #ApacheCon #ApacheBigData

Metz showed comparisons of likes from extroverts, mentioning parties, going out, and being in groups, with the preferences of introverts, such as computers, computer games and anime. Similarly, a word cloud from people deemed agreeable featured terms such as “wonderful” and “exciting,” while the less-agreeable folks’ word cloud leaned heavily toward expletives — which elicited hearty laughter from the crowd.

Knowing a person’s preferences could help tailor more effective ads, such as emphasizing the partying to an extrovert, while pitching something quieter, with a message such as “beauty doesn’t have to shout,” to an introvert. The Cambridge research has found a conversion rate of 1.5 times higher using advertising based on these preferences, she said.

Further research is going on into image analysis that can determine things like extroversion/introversion from photos. And more data is being collected to understand people in real time.

The U.K. website Metro reports political parties are spending millions on personalized Facebook ads, a tactic expected to be used widely just before next month’s British general elections. What it calls “dark adverts” differ from regular political advertising because different users get different pitches. Through the use of a Chrome extension, a group called “Who Targets Me?” is attempting to monitor use of these ads, which target people by location, age and gender.

However, just tracking data from cell phones can provide insight into a person’s activity, sleep and time spent with others, for instance, Matz pointed out. That could help identify people at risk of depression, but also opens up the possibility that it could be used to target vulnerable people, she said.

“With great power comes great responsibility,” she said, adding that those using this data must do a better job of communicating to the public what’s possible with the data and how its use will affect their lives.

“[The data] offers so much potential to help us make better decisions, but we need to make sure the data is used to improve their lives.”

Susan Hall is the Sponsor Editor for The New Stack. Her job is to help sponsors attain the widest readership possible for their contributed content. She has written for The New Stack since its early days, as well as sites...
Read more from Susan Hall
SHARE THIS STORY
RELATED STORIES
Devs and Ops: Can This Marriage Be Saved? Building an Internal Developer Platform Isn't Just about Tools How Security Champions Can Change Your Culture It's No Longer about How You Write Code but How You Operate It Case Study: How Dell Technologies Is Building a DevRel Team
SHARE THIS STORY
RELATED STORIES
Tackling 3 Misconceptions to Mitigate Employee Burnout What Is a Sociotechnical Knowledge Map and Why You Should Care Case Study: How Dell Technologies Is Building a DevRel Team SANS Survey Shows DevSecOps Is Shifting Left  Engineering Leaders: Switch to Wartime Management Now
THE NEW STACK UPDATE A newsletter digest of the week’s most important stories & analyses.
The New stack does not sell your information or share it with unaffiliated third parties. By continuing, you agree to our Terms of Use and Privacy Policy.