Engineered bacteria, which consisted of six different genetic logic circuits and distributed among six cell populations, processes the chemical information and solved the problems by expressing, or not expressing, four different fluorescent proteins.
Nov 19th, 2021 6:00am by Kimberley Mok 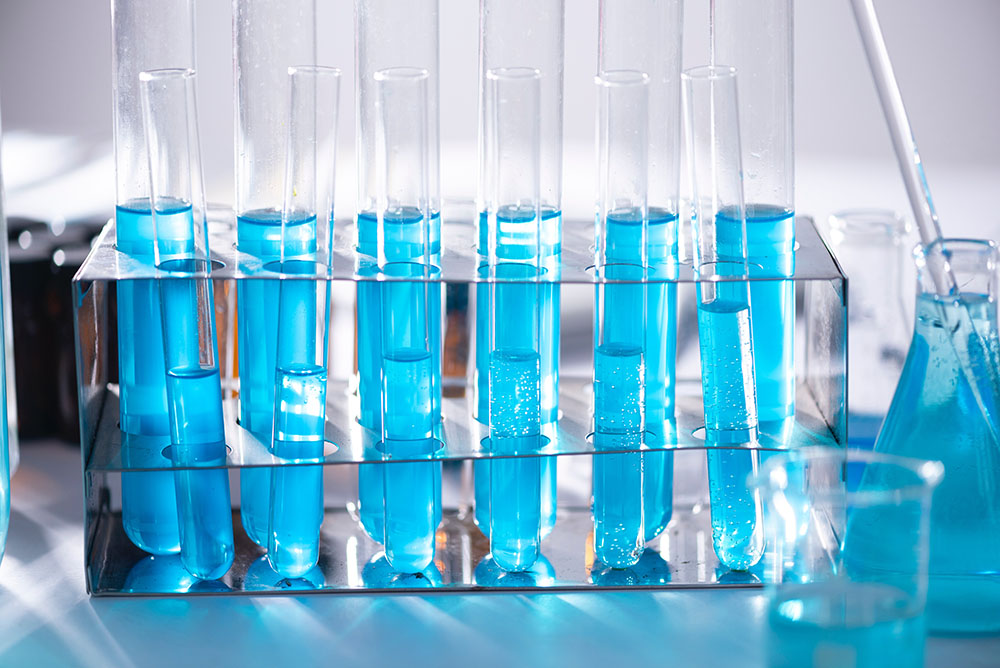 The notion of distributed computing — in other words, solving problems with a system whose components are located on different networked computers — has been around for several decades now. Such distributed systems are more scalable, fault-tolerant and resilient, as other nodes in the network can continue to function even if another portion of the system fails. Distributed systems can also offer more computational power compared to a standalone machine, which can be leveraged to accomplish amazing feats like helping physicists discover new particles, to citizen scientists potentially finding signs of alien intelligence out in the universe.

While we might typically associate distributed computing with electronic machines made of microchips, metals and plastic, it’s also possible to set up distributed systems using biological computers, as recent work from a team of researchers from Kolkata, India’s Saha Institute of Nuclear Physics has shown. Their findings, published in ACS Synthetic Biology, outline how the team divided up the task of solving a series of computational problems, set up in the form of grid-structured, chemically generated mazes, among six different types of synthetically engineered E. coli bacteria.

Biological computers have evolved significantly in the last couple of decades, as the field of nanobiotechnology evolves, and genetic engineering tools have gotten more sophisticated, and costs of synthesizing and sequencing DNA have decreased.

By tinkering with biological components like proteins and DNA, experts can use these molecules to create organic computers that can be “programmed” to solve relatively simple computational problems — albeit typically at much slower speeds than an electronic computer. Nevertheless, there’s great potential with biocomputers, as they would use less energy and could easily scale up to solve more complex problems simultaneously in comparison to their electronic counterparts.

With this maze-solving experiment, the Saha Institute team didn’t use walled mazes in the physical sense. Rather, they used a palette of four chemicals — glucose, isopropyl β-D-1- thiogalactopyranoside, anhydrotetracycline and N-Acyl homoserine lactones — to create abstracted, chemical versions of a 2X2 maze.

The idea was to set up one “maze” per test tube, with different combinations of the four chemicals, totaling up to sixteen different maze configurations in total. Here, the various maze problems are represented as a “chemical space”, with the top left square of the grid acting as the beginning of the maze, and the bottom right square functioning as the exit. Each part of the grid can be open or closed, depending on the chemical that is present.

“Here, we generated abstract maze problems by assigning chemicals at each position of the maze, and its presence or absence defined the ‘obstruction’ or ‘open space’. Thus, a mathematical question was posed through chemicals,” explained the team.

Engineered bacteria, which consisted of six different genetic logic circuits and distributed among six cell populations, processes the chemical information and solved the problems by expressing, or not expressing, four different fluorescent proteins.

The team then engineered various sets of E. coli — each with varying genetic “circuits” that could detect and evaluate those chemicals. The manipulated bacteria then enter the test tube “mazes” to process the chemical information, in order to “solve” them.

“We created six sets of molecular engineered bacteria, which in a mixed population worked as a ‘solver’,” said the researchers. “The engineered bacteria consisted of genetic logic circuits, through which the solution algorithm has been implemented. The ‘solver’ processed the chemical information and produced a solution by expressing fluorescence proteins and the solution path(s) was visualized by glowing bacteria. If there was no solution, the system became dark.”

After adding the bacteria “solver” to each of the test tubes and waiting for 48 hours to see if the tubes lit up to indicate a solved maze, the team then translated their findings onto a mathematical truth table, using 1s and 0s to map out all the possible logical expressions stemming from the different maze configurations. 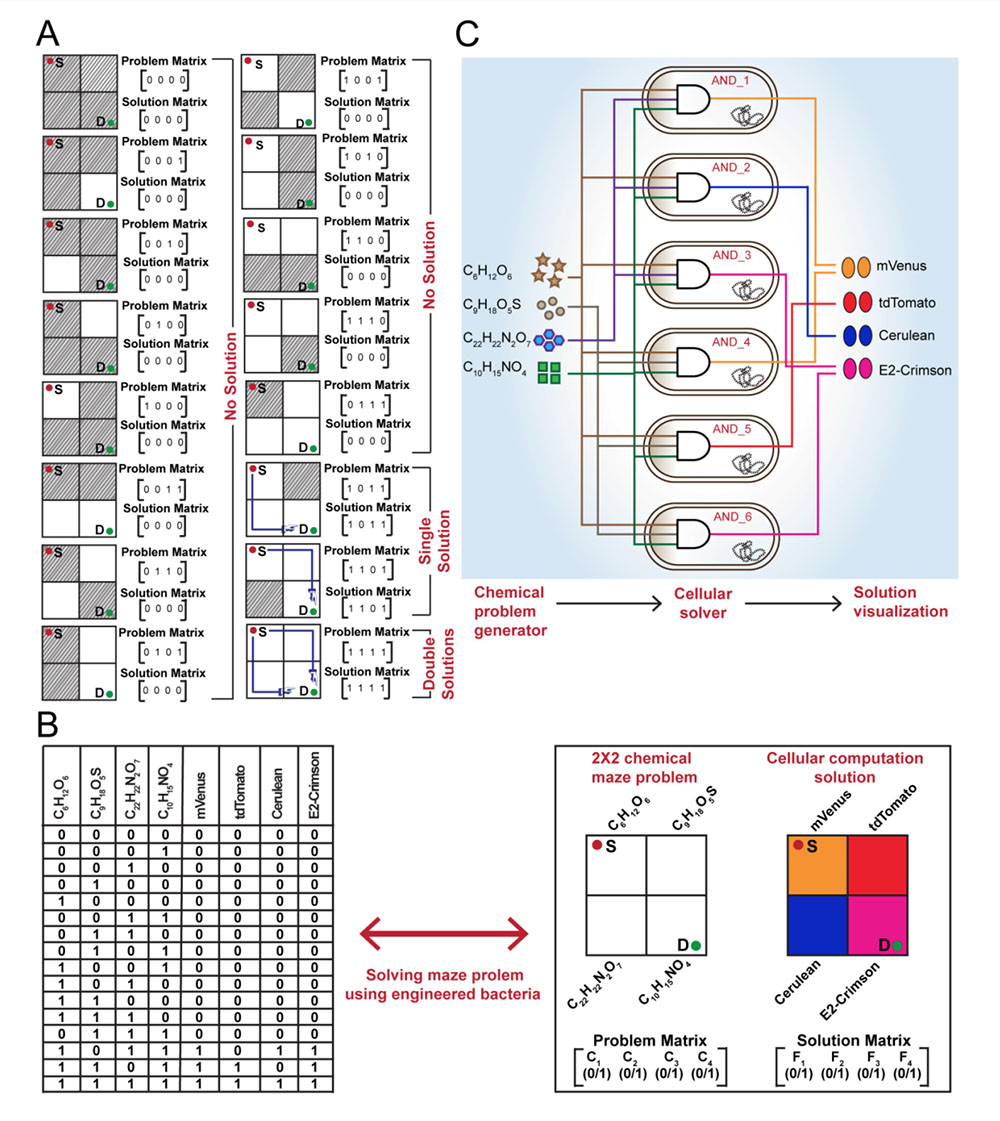 A) All possible solutions of the 2X2 maze, with “open” paths in white and mathematically represented as “1”, and “blocked” paths in grey and represented as “0”. B) Input-output “truth table” matrices representing the maze solutions with 0s and 1s. C) Diagrams indicating the cellular design of the bacterial maze “solvers” (inputs) and the 4 fluorescent proteins (outputs).

The Power of Distributed Biocomputing

Surprisingly, the team’s bacterial-based computers correctly showed with physical proof that only three of the 16 mazes were actually solvable, in addition to solving them at the same time. The team notes that mathematically, this is something that is quite complex to achieve, and they credit this feat to the fact that their system distributed circuit functions among six types of engineered cells.

“Our engineered bacteria, which consisted of six different genetic logic circuits and distributed among six-cell populations processed the chemical information and solved the problems by expressing, or not expressing, four different fluorescent proteins,” said the team. “Interestingly, mathematically such a calculation was not straightforward. Generating such abstract mathematical mazes using chemicals, and solving them with engineered bacteria might inspire new possibilities in cellular computing and information processing.”

As the team’s work demonstrates, there may be huge potential in implementing a distributed approach when it comes to designing more computationally powerful biological computers in the future, so that they can share information and perform increasingly complex calculations more efficiently.

“This maze-solving task was an example of biological distributed computing, where the total computational task was distributed among six different cell populations with six different genetic circuits,” said the team. “In theory, the general strategy used here can be scaled up to more bigger maze problems by increasing the number of inputs, outputs, and genetic circuits.”

Besides that, researchers might someday also harness the natural optimization process behind biological evolution to push biocomputers even further — potentially scaling them up and integrating them with natural environments in order to solve some of today’s greatest problems, like optimizing agricultural outputs to boost food security, or even tackling climate change — a task of colossal proportions, even for conventional computers.