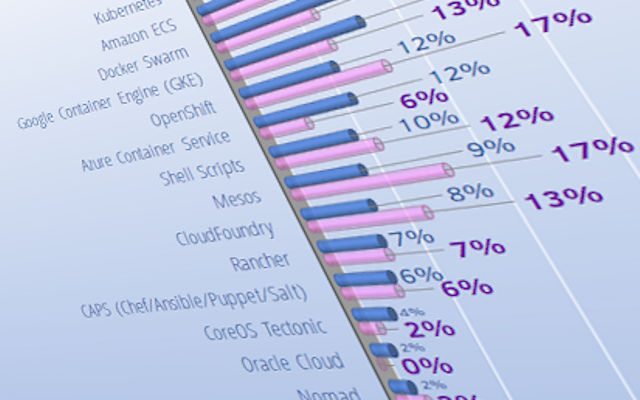 Two of the most prominent brands on the commercial side of the Kubernetes container orchestration space will become one, by virtue of an acquisition agreement announced Tuesday. CoreOS, which first opened up the containerization market to become a real market, and which introduced the world to the concept of a minimal Linux kernel, is now a wholly-owned subsidiary of Red Hat. The deal is done, not pending, according to CoreOS CEO — and soon-to-be Red Hat executive — Alex Polvi, in an interview with The New Stack.

“What we’re able to do because of the merger,” stated Polvi, “is really bring together both product lines into a truly unparalleled set of capabilities that customers won’t be able to find anywhere else in the market. Our products, while competitive, were highly differentiated in a lot of ways. When you think of OpenShift and Tectonic, they’re both Kubernetes products, but they’re wildly different in how they work, and in their value propositions to customers. By combining those things together, you have the ultimate product that the market could possibly have, where you get it all.”

It’s a somewhat ambitious statement from a person who is about to become a former CEO. Technically speaking, the deal is an acquisition — part of a private transaction, and the 21st such transaction, according to reports, in Red Hat’s history. Although the company does not always publish the values of its acquisitions, this time it valued the CoreOS deal at $250 million. The company’s 2015 deal to purchase configuration automation firm Ansible was valued at the time of its initial announcement at $100 million, though an independent valuation in retrospect placed the deal at $150 million.

The Next Uncertain Convergence

What Red Hat made clear to us is also too soon to declare is the composition of the Kubernetes-based product that will emerge from the deal.

“We have an opportunity in front of us to make decisions that make sense,” said Ashesh Badani, Red Hat’s vice president for OpenShift, in a very clever way of phrasing that a final decision about Tectonic’s place in the OpenShift product line has yet to be determined.

“We want to take not months here, but just a few weeks, to think through what makes the most sense. How do we converge these two technologies so we’re keeping the best of what both have to offer?” Badani continued. Tectonic has a certain share of commercial customers, he said, so any brand integration Red Hat undertakes should retain as much of the value those customers bring as possible. However, the OpenShift product plan, he emphasized, should not be interrupted.

“Give us some time to sit down across our engineering teams, product teams, marketing teams, to figure out what’s the best path forward,” the VP asked us.

Didn’t CoreOS and Red Hat have the opportunity for this little sit-down prior to signing on the dotted line? Not really, said Badani: Though the financial part of the negotiations were conducted in full, certain facts pertaining to the operational aspects of integration following the transaction, had to be kept confidential. So at the time of this writing, the specific form that Tectonic (CoreOS’ commercial Kubernetes) will take, and how it will fit alongside or within Red Hat’s OpenShift product line, are open questions.

Does this mean the fate of CoreOS’ extensive talent, including Polvi, CTO and co-founder Brandon Philips, and engineering manager Xiang Li, is also up in the air? Badani made it clear that all of CoreOS’ developmental and technical talent will be invited to stay on board with Red Hat, emphasizing that the company’s people were, in his mind, its principal asset.

“We’ve done this transaction, this partnership, because of the immense engineering talent and the innovation that CoreOS has brought to the marketplace,” said Badani. “It would be remiss of us if we weren’t doing everything in our power to ensure Alex, Brandon, and the rest of the team — the whole engineering and marketing team — weren’t brought in fully.” Although their titles are yet to be sorted out, he added, as of today they’re officially part of the organization. There may need to be changes to product roadmaps going forward, he acknowledged, which could help determine what those new titles should eventually be.

Whither the Core of CoreOS

CoreOS’ Polvi listed other products in his company’s line which he characterized as differentiated or unique from anything else in the market, which he expects to see integrated into the Red Hat line. The Quay private container registry (which almost no one pronounces “key”) is one product he expects will live on and thrive, as well as etcd — the de facto key/value store for Kubernetes since its inception, and a long-time preferred component by Red Hat’s engineers.

Container Linux was also mentioned by Polvi as a differentiated product likely to emerge from the transition — the original product that gave CoreOS its name. This could still be wishful thinking, given that Red Hat is itself the producer of Linux operating systems. The company’s Atomic Linux is already a lighter-weight distribution of Red Hat Enterprise Linux (RHEL), designed to run in distributed hosts governed by a central, fully-fledged RHEL core.

An FAQ posted by Red Hat Tuesday appeared to state that parts of the Container Linux delivery mechanism could be grafted onto Atomic — particularly the over-the-air update system that Brandon Philips boasted made CoreOS superior to Atomic, back in 2015 when Red Hat was the competition. Red Hat described this grafting as a “reconciliation” between the two operating systems. The message seemed to stop short of declaring Container Linux to have been formally acquired.

That message prompted CoreOS Tectonic product manager Rob Szumski to offer a bit of supplemental explanation, in a separate message posted to Google Groups and through Twitter.

The key word in that above paragraph was “may.”

Meanwhile, rkt — the container format and runtime that provoked the first great, although brief, split in the containerization field in 2015 — was not one of the topics on the negotiating table, according to both Red Hat and CoreOS. Having been donated to the Cloud Native Computing Foundation last year, rkt could still show up in a few customer driven implementations going forward, although Polvi told us he expects rkt to find value on its own merits.

Also absent from the acquisition discussions, according to both Polvi and Badani, was any substantive mention of Docker or Docker Inc.

“Every opportunity we get to collaborate in the open source community, we will continue taking up,” said Badani. “With regard to competition, we’re not actually seeing Docker a whole lot. The market momentum toward Kubernetes has been very pronounced, mostly in the last few months, with Amazon and Microsoft Azure coming on board. Docker’s investment in that area has been very recent, so they haven’t really shown up as much competition. They’re not as comparative as they would like to be with their Swarm orchestration technology, which is why they had to also make the investment in Kubernetes. I’m not really worried about them.”

“CoreOS is primarily selling products to companies that want to use Kubernetes,” Polvi said. “There are really only two Kubernetes products on the market that the enterprise customer can go and by today: Tectonic and OpenShift. Docker announced a Kubernetes product, and now has an alpha or maybe a beta product out there, but we’re not seeing an enterprise sales team ready. Maybe that will change in the future, but our customers want Kubernetes.”

Docker’s Kubernetes integration for Docker Enterprise was released as Beta on January 18.

In Search of the Kubernetes Market

By Polvi’s math, there’s about to be one single vendor for enterprise Kubernetes. That may come as a shock to Kublr, but at least in this former CEO’s mind, it’s the marriage of his product with Red Hat’s that will inevitably run the table.

But just how big of a table are we talking about? For a survey last fall, when the Cloud Native Computing Foundation asked organizations to choose any and all orchestrators they used in production, some 69 percent of total respondents said they used generic Kubernetes. OpenShift accounted for only 12 percent of total responses, Tectonic only 4 percent. 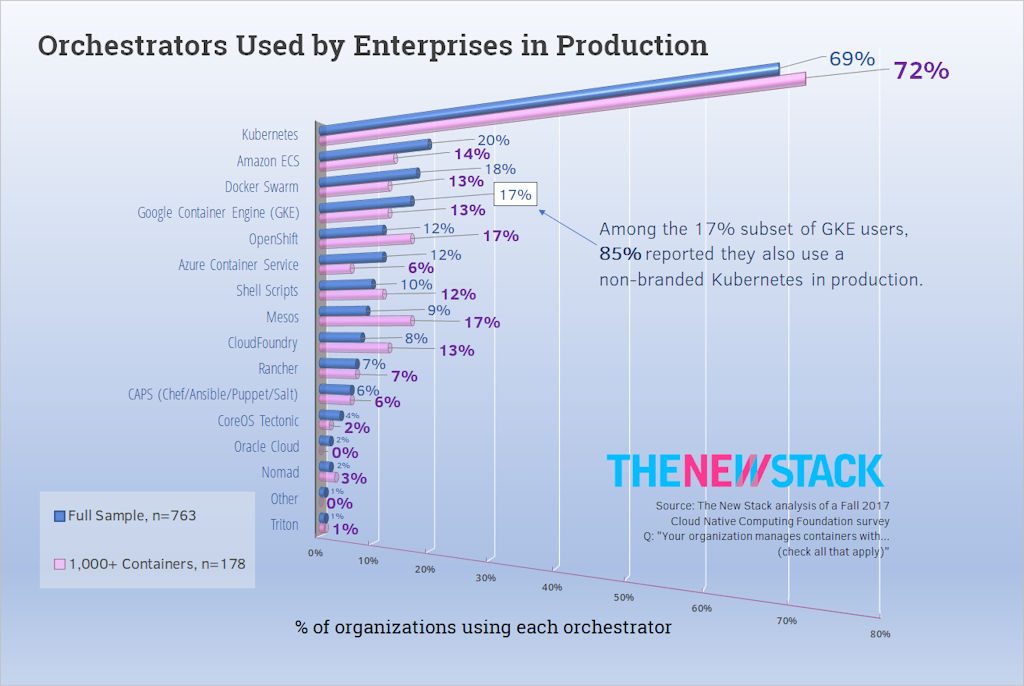 When the question is directed to the 23 percent subset of respondents whose organizations typically deploy 1,000 or more containers in production, OpenShift’s share of that subset did grow, to 17 percent. But Tectonic’s share was cut in half, and generic Kubernetes gained 3 points.

So perhaps the acquisition may make a dent in the Kubernetes market, except that the market per se is constituting less than one-third of the overall ecosystem. Or perhaps, as IT analyst Kurt Marko believes, the idea that there’s a market here at all may be an illusion.

“Kubernetes is the de facto standard for cluster management/workload orchestration. No one, Red Hat included, is going to dominate that market,” Marko wrote, in a note to The New Stack, “since it’s not really a market, it’s a feature.

“I really don’t think most enterprise customers (i.e., managers, execs, not developers) give any thought to the details of which Linux distributions they run,” Marko continued. “They are more interested in something that runs the applications reliably and securely, that provides good performance, and is supported with regular updates and problem response staff. If CoreOS works better for containers, great, and better still if it’s bundled into a container platform that includes Kubernetes, a registry, and virtual network fabric (Contiv, etc.).”

Marko does see a natural fit for Container Linux in Red Hat’s product line, and particularly Tectonic as an infrastructure platform for OpenShift PaaS. But such natural fits are being discovered almost weekly these days, in some cases, without the need for mergers or acquisitions — case in point, Cisco’s unveiling last week of its own Cisco Container Platform, which is yet another branded Kubernetes service.

“I think the real ‘battle’ will be winning users wanting hybrid container architectures that seamlessly combine on-premises and public cloud container services,” wrote Marko, “and on this score, Red Hat has more work to do, particularly considering the Google/VMware and Google/Cisco partnerships.”

So while this deal clearly changes the playing field for Kubernetes in the developer space, and probably further marginalizes Docker, it may actually not be the kind of “market consolidation” that used to characterize the maturity of a software platform. More likely, it’s the latest step by a major player in the server marketplace to find a way to capitalize on the success of a product that, had it been commercial and proprietary from the start, might have been a gold mine… except that, had it been commercial and proprietary, no one would have ever heard of it.

Use the Data Cloud to (finally) Demystify Data Governance
July 29, 2021