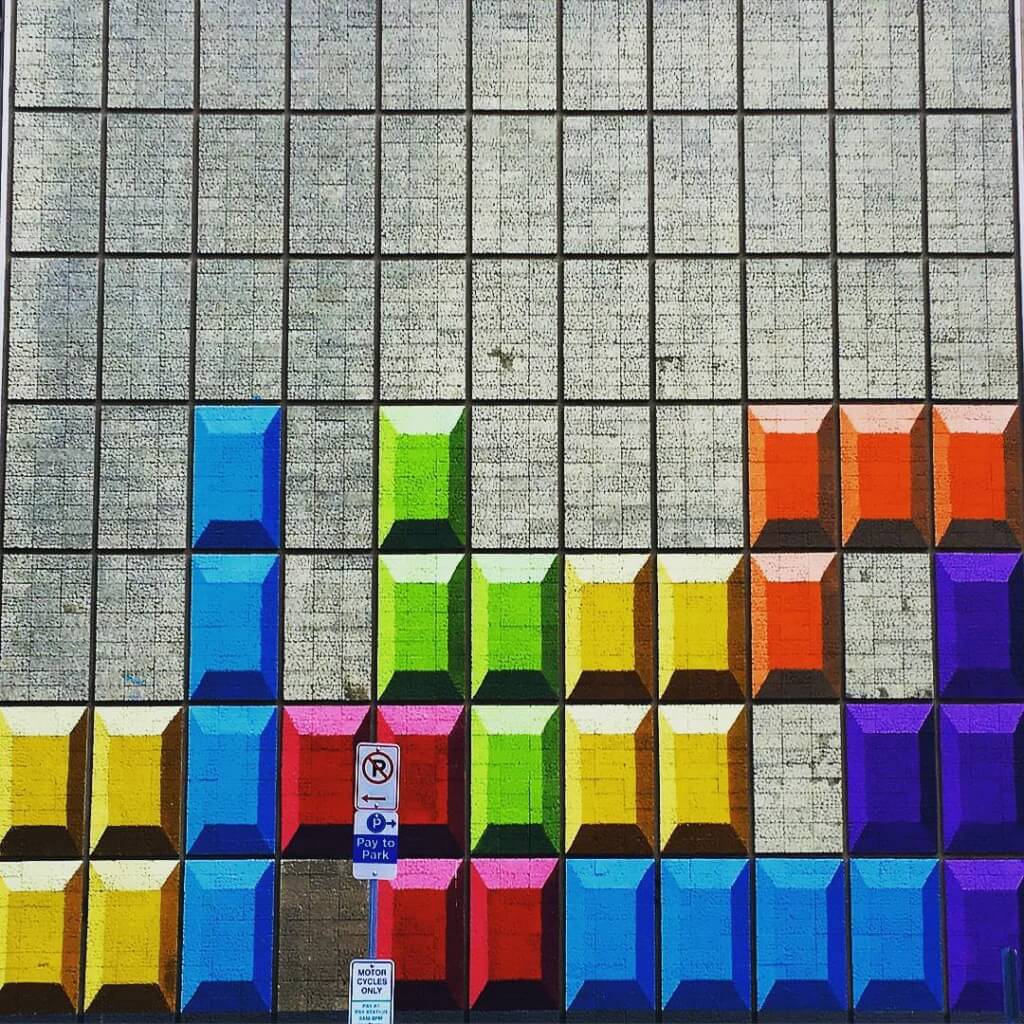 Rather than relying on external software, Docker Inc. wants to make orchestration a built-in feature to its core container engine.

The upcoming release of the Docker Engine, version 1.12 due in July, will come within built-in orchestration capabilities, allowing users to manage complex containerized applications without additional software, using the same command line structure and syntax that developers are familiar with using the Docker containers.

Previously, these orchestration capabilities, as they are known, have been offered through third-party tools, such as Kubernetes or Docker Swarm.’

“As Dockerized applications get deployed more broadly, we have to make technology that aligns very closely to what system administrators are used to,” said David Messina, Docker vice president of marketing. 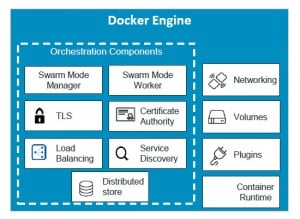 An optional feature, the Docker Engine software can act as a node in a self-organizing cluster of similar engines across multiple servers, which can work together as a single scalable system to run large fleets of interconnected Docker containers.

The orchestration model of application deployment offers a number of benefits, especially those built in a microservices architecture. Both the applications and the container runtime environment can be easily scaled up to meet demand. It also ensures a way of running applications across different hardware environments, using Docker as the unifying substrate.

Docker Engine in effect “becomes a node running on a virtual machine or a physical machine,” Messina said. “The primitives for orchestration exist in every engine, including the ability to self-organize and discover other nodes automatically.” The operators choose which engines are the managers and which are the workers.

The cluster of Docker nodes, or “Swarm” in Docker parlance, is self-healing, in that an application that was running on a failed node is restarted elsewhere. Workload information is captured in a strongly-consistent distributed data store, within each engine.

“Each engine is acutely aware of the state requirements of the applications and services and is aware of each container that is running on every worker engine,” Messina said.

“Because they are all sharing active knowledge about the state when a scheduling request comes in, it is stored in memory, so the scheduling can happen in memory as well, so there is no blocking,” Messina said. “There is a constant reconciliation between manager and nodes, to make sure if a node goes down things will be rescheduled to another worker.” 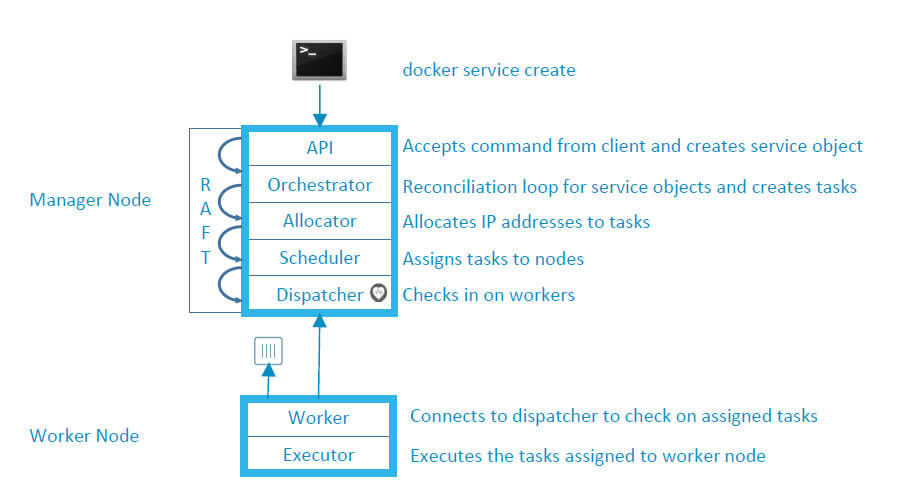 To automate workflow, developers can deploy a declarative service deployment API, which defines the services, storage, networking and compute resources. The API offers the ability to declare abstractions above the container layer, including services, images, scale and ports. Developers can use Docker Compose to declare the requirements and turn them into service requests.

Advanced deployment executions can also be carried out through the APIs, including canary and blue/green rolling updates. Application-specific health checks can be carried out as well. The administrator chooses how new nodes can join a swarm, either automatically, manually, or by a cryptographically secret handshake. 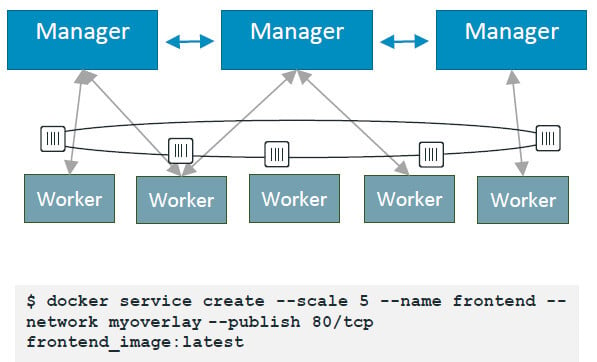 In this Docker command, five instances of a container are spun up into a new service, called Frontend, connected over the “My Overlay” network and communicate externally through TCP port 80. 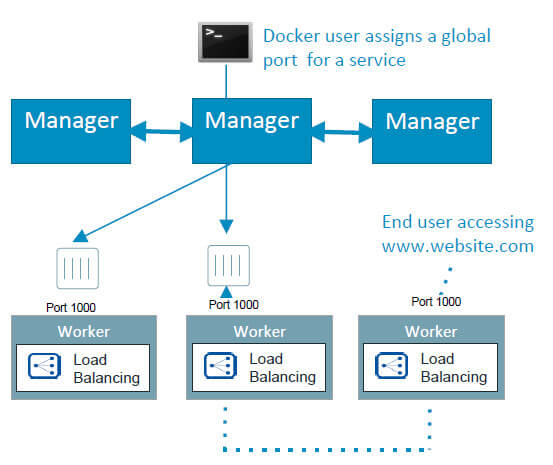 All communication among the nodes is encrypted and carried out through TLS, and a PKI service offers automatic certificate rotation. A general purpose framework called the Cryptographic Node Identity, proves support for identifying and managing sensitive workloads and networks.

“An engine has to be cryptographically identified to be part of a swarm, and they communicate automatically over TLS,” Messina said. 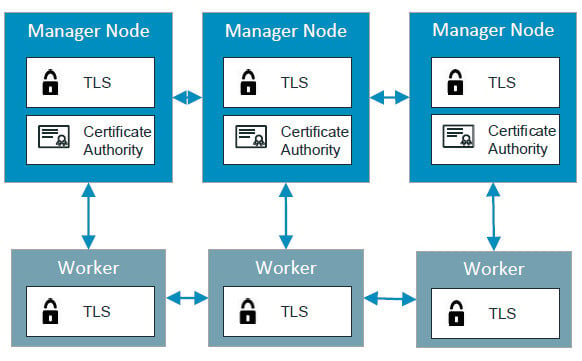 Although many of the capabilities of Docker Swarm have been embedded within the Docker core engine itself, the company will still maintain and update Swarm for the indefinite future, Messina said.

A release candidate of Docker Engine 1.12 has been issued, and the company suggests trying the new capabilities on the newly launched Docker for AWS and Docker for Azure cloud services, both of which offer integration into their backend storage services.

Commercially supported versions of the Docker Engine can be obtained from Docker, HPE or IBM, and can be run on Red Hat Enterprise Linux, Ubuntu or HPE Linux. The company will offer deeper dives into this new technology at its user conference, DockerCon, being held this week in Seattle.

Joab Jackson is Editor-in-Chief for The New Stack, assuring that the TNS website gets a fresh batch of cloud native news, tutorials and perspectives each day. He has logged over 25 years in infrastructure IT journalism, including stints at IDG,...
Read more from Joab Jackson
SHARE THIS STORY
RELATED STORIES
Acorn, a Lightweight, Portable PaaS for Kubernetes Acorn from the Eyes of a Docker Compose User 3 Container Practices to Boost Your Security Posture How to Deploy Containers with nerdctl The Next Evolution of Virtualization Infrastructure
Docker, HPE, IBM and Red Hat are sponsors of The New Stack.
TNS owner Insight Partners is an investor in: The New Stack, Docker.
SHARE THIS STORY
RELATED STORIES
Tutorial: Deploy a Full-Stack Application to a Docker Swarm How to Deploy Containers with nerdctl .NET 7 Simplifies Route from Code to Cloud for Developers What Is Apptainer and How Do You Install It on Ubuntu Server? Securing Windows Workloads
THE NEW STACK UPDATE A newsletter digest of the week’s most important stories & analyses.
The New stack does not sell your information or share it with unaffiliated third parties. By continuing, you agree to our Terms of Use and Privacy Policy.