Docker Says Some Users Must Pay: But Can It Make Money?

Docker’s decision to start charging corporate customers as part of a business revamp has raised eyebrows as the pioneer container orchestration provider struggles on its road to profit.
Sep 1st, 2021 11:59am by B. Cameron Gain 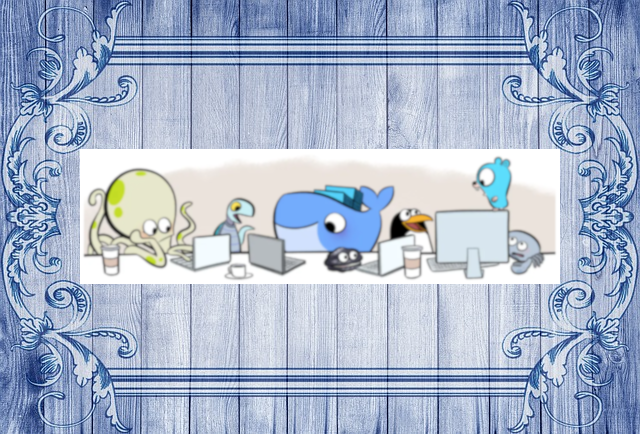 Docker’s decision to start charging corporate customers as part of a business revamp has raised eyebrows as the pioneer container orchestration provider struggles on its road to profit.

“It’s not a secret, but we’re looking for a sustainable business model,” Dieu Cao, senior director of product management at for Docker told The New Stack, reflecting Docker CEO Scott Johnston’s comments in a blog post about how Docker looks to grow sustainably with the licensing changes.

Docker remains wildly popular with 55% of professional developers using it today and the number of developers expected to total 45 million by 2030, according to company stats. Docker containers are required to run numerous applications on Kubernetes and other environments relied on by millions, including this writer. But despite its popularity, the company has struggled to make a profit.

“It is true that Docker is the most-used developer technology in Kubernetes environments and Docker Hub is still serving approximately 50% of production container images today,” Torsten Volk, an analyst at Enterprise Management Associates, told The New Stack. “But the Docker revenue model relies on these developers convincing their executives that they really need to use their own commercial DevOps toolchain when their company is already running a Kubernetes management platform. Yes, Docker Desktop is popular, and increasing developer efficiency is near the top of everyone’s list of priorities, but the big question will be if the alternatives are simply good enough for most users.” 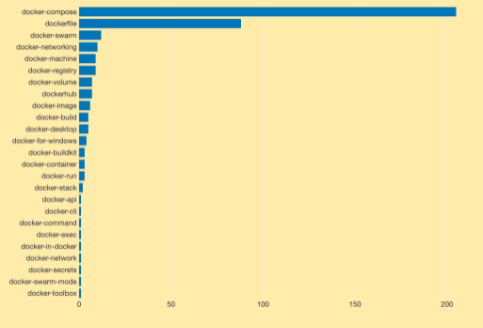 Stackoverflow developer platform statistics for the past three weeks.

In reference to the above chart on the Stackoverflow developer platform statistics for the past three weeks, Docker Compose and Dockerfile are the key topics today among the most-used Docker components. Both have played a major role in Docker’s popularity as they have allowed developers to universally define application environments to run on any platform supporting the Docker runtime, “but is this enough for organizations to start paying for this previously free toll?” Volk said.

There are other open source alternatives developers can use today, for example, such as Kubernetes Minikube, Google Skaffold, Tilt, Lando and others, Volk noted. “While Docker Desktop includes much more than just Compose, the question will become if the additional capabilities, mostly focused around SecOps, will be sufficient to convince organizations to spend money instead of using a combination of open source software and SecOps tools they are already paying for,” Volk said. “My money is on the latter, but it would be great seeing the Docker guys prove me wrong.”

Updates to Docker’s Subscription Service Agreement (SLA) it communicated for Docker Desktop include: 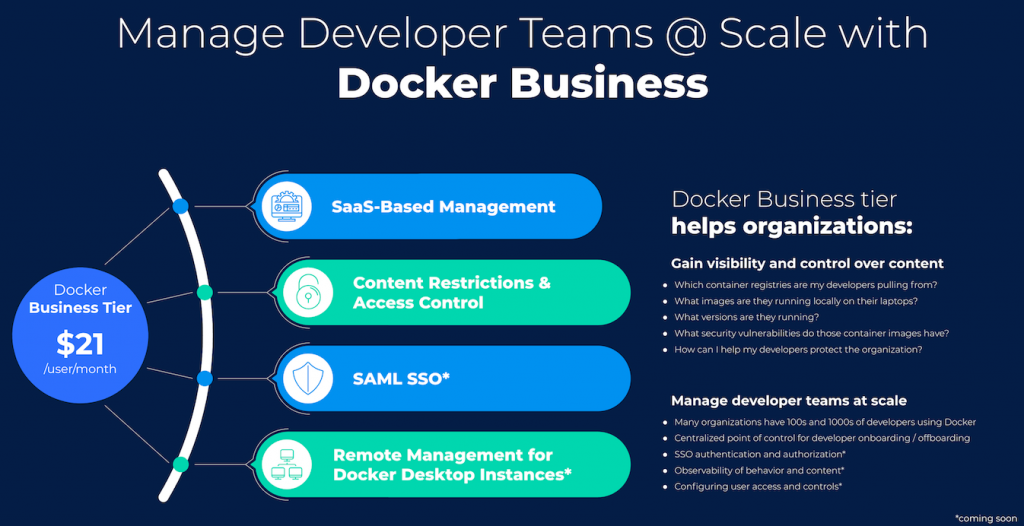 A $5 per month fee for businesses users is hardly a gouge rate. The extra revenues could lead to an improved Docker user experience, the company says.

“In terms of looking for how to grow ourselves sustainably and we are fueling more investment into the tools that developers want to use: that’s what we’re aiming to do here,” Cao said. “This is really about investing in Docker desktop, which is much loved by everyone.”

Some observers, however, have been less bullish on the move. Joe Beda, principal engineer for VMware — and one of the three creators of Kubernetes — in a Tweet, noted how he could “see the point of view that many people feel that this is ‘bait and switch.’ Of course they CAN do this. But it also burns goodwill.”

I want to be nuanced here. Docker should be able to make money and be a successful business. They are adding value with Docker Desktop and that is worth recognizing.

I also see the point of view that many people feel that this is “bait and switch”. Of course they CAN do this. But it also burns good will.

Every company has an unwritten social contract with their users. Changing that is painful and leads to lack fo trust.

Beda’s comments — as well as comments by other critics of Docker’s move  — have been seen as ironic by some observers, given that Docker’s concept of containerization provided the foundation for Kubernetes as we know it and remains available now for a nominal fee that only large-company users must pay.

Volk said he agreed but “this line of thinking did not play a role when organizations replaced Docker Swarm with Kubernetes in order to run their applications on one industry-standard open source platform. We have never seen significant brand loyalty in the past when software companies started charging for tools that elsewhere were available for free.”

there are some some very bad takes going around about docker charging a small fee for its software. this isn’t one of them. any software that makes a developer more productive is probably worth paying for. have you seen tech salary inflation recently? https://t.co/8CgOPe9NGf

Docker’s decision was also applauded by other industry observers and analysts. James Governor, an analyst for and co-founder of RedMonk, Tweeted: “Any software that makes a developer more productive is probably worth paying for.”

After Docker sold Docker Enterprise to Mirantis in 2019, the company is now offering a set of services targeted at developers and built around Docker containers called Docker Business, as part of the changes made to its licensing agreements.”

In addition to all the capabilities available in the Docker Pro and Docker Team subscriptions, Johnston described in his blog post how Docker Business offers the ability for organizations to control what container images developers can access from Docker Hub, “ensuring teams are building securely from the start by using only trusted content.” Docker Business will also soon provide such capabilities as SAML SSO, the ability to control what registries developers can access and to remotely manage Docker Desktop instances.

“We’re not saying you need to use Docker Business if you don’t see enough value there or to be in compliance, either,” Cao said. There are a number of organizations that give their developers a certain budget, and could just have their developers expense their manager for $5 a month and that would just be just fine as an approach as well.”

However, company executives representing the pieces of Docker that remain with the company after Mirantis acquired the Docker Enterprise business have to make the case that business users should pay the new licensing fees when required, Volk said. “Docker needs to show customers that the value of Docker Desktop goes way beyond Docker Compose and is key for unlocking so much additional developer productivity that charging $5 per seat is a no brainer,” Volk said.

BC Gain’s obsession with computers began when he hacked a Space Invaders console to play all day for 25 cents at the local video arcade in the early 1980s. He then started writing code for very elementary games on the...
Read more from B. Cameron Gain
SHARE THIS STORY
RELATED STORIES
Container Security: A Troubling Tale, but Hope on the Horizon Docker versus Kubernetes: Start Here Acorn, a Lightweight, Portable PaaS for Kubernetes Deploy a Container Stack in Portainer from a GitHub Repository The Next Evolution of Virtualization Infrastructure
Mirantis is a sponsor of The New Stack.
TNS owner Insight Partners is an investor in: The New Stack, Mirantis, Docker.
SHARE THIS STORY
RELATED STORIES
Can Observability Platforms Prevail over Legacy APM? How to Deploy Containers with nerdctl Securing Windows Workloads Acorn, a Lightweight, Portable PaaS for Kubernetes Case Study: How SeatGeek Adopted HashiCorp’s Nomad
THE NEW STACK UPDATE A newsletter digest of the week’s most important stories & analyses.
The New stack does not sell your information or share it with unaffiliated third parties. By continuing, you agree to our Terms of Use and Privacy Policy.