DockerCon 2019: All About the End-to-End Container Lifecycle

While Kubernetes might have stole Docker's thunder over the past few years in the ongoing revolution of cloud native computing, Docker is taking over the heavier work of making container-based development actually consumable by the enterprise.For the opening keynote of DockerCon 2019, being held this week in San Francisco, Docker CEO Steve Singh emphasized how Docker Enterprise, the company's newly updated container management package, can assist in the entire development and deployment lifecycle.
Apr 30th, 2019 2:18pm by Joab Jackson 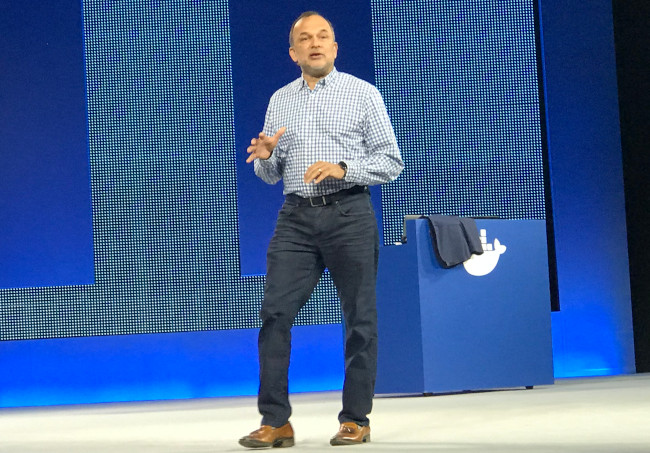 While Kubernetes might have stolen Docker’s thunder over the past few years in the ongoing revolution of cloud native computing, Docker is taking over the work of making container-based development actually consumable by the enterprise.

For the opening keynote of DockerCon 2019, being held this week in San Francisco, Docker CEO Steve Singh emphasized how Docker Enterprise, the company’s newly updated container management package, can assist in the entire development and deployment lifecycle.

Docker Enterprise 3.0 includes a number of advances to automate the development and deployment of containerized applications, including the ability for developers to push applications into multiple cloud deployments straight from the desktop, a low-maintenance setup of both Kubernetes and Docker Swarm directly on the desktop, and even a fully managed, hosted version of Docker Enterprise. The company’s position is that most IT shops don’t have the expertise to run something like Kubernetes in-house, so Docker is providing packages and tools to automate as much of the heavy lifting as possible.

To kick off the keynote, Singh brought on stage a number of representatives from enterprise users — Docker has about 750 enterprise customers overall — to talk about their experience containerizing their applications. For Todd Heard, vice president of technology of Carnival, the chief benefit that containerization has brought to the luxury cruise line is the ability to connect different aspects of the cruise line trip, such as check-in and onboard services, into a single unified experience, through the company’s Medallion rewards program. “Everyone wants to talk technology but in the travel industry it’s all about the experience,” Heard said.

“We are all in on the cloud,” agreed Eric Zielinski, head of cloud operations for insurance company Nationwide. That company is undergoing an ambitious effort to have most of its applications running in the cloud within the next few years, including many of its older applications.

The company also showed off the fruits of its recent partnership with ARM. With a preview feature in Docker Enterprise 3.0, a developer can build an entire ARM-based application with an instance of the (x86-based) Docker Desktop. In fact, all the official images in the Docker Hub can be run on ARM, Johnston noted, paving the way for the use of low-cost ARM server chips now being offered by Amazon Web Services and Packet Networks.

"Everyone wants to talk technology but in the travel industry its all about the experience" — Todd Heard , VP of technology for @CarnivalCruise, which is using @Docker to connect services for a superior customer experience. #Dockercon pic.twitter.com/kEi8yC4FqA

Sign up for the #DockerEnterprise beta at https://t.co/8VctQhSJFS #Dockercon . GA available by q2 this year pic.twitter.com/wyn3eww2mc

Joab Jackson is Editor-in-Chief for The New Stack, assuring that the TNS website gets a fresh batch of cloud native news, tutorials and perspectives each day. He has logged over 25 years in infrastructure IT journalism, including stints at IDG,...
Read more from Joab Jackson
SHARE THIS STORY
RELATED STORIES
The Next Evolution of Virtualization Infrastructure Case Study: How SeatGeek Adopted HashiCorp’s Nomad .NET 7 Simplifies Route from Code to Cloud for Developers Install Dozzle, a Simple Log File Viewer for Docker What Is Apptainer and How Do You Install It on Ubuntu Server?
TNS owner Insight Partners is an investor in: The New Stack, Docker.
SHARE THIS STORY
RELATED STORIES
Securing Windows Workloads 3 Container Practices to Boost Your Security Posture Tutorial: Deploy a Full-Stack Application to a Docker Swarm Can Observability Platforms Prevail over Legacy APM? Deploy a Container Stack in Portainer from a GitHub Repository
THE NEW STACK UPDATE A newsletter digest of the week’s most important stories & analyses.
The New stack does not sell your information or share it with unaffiliated third parties. By continuing, you agree to our Terms of Use and Privacy Policy.