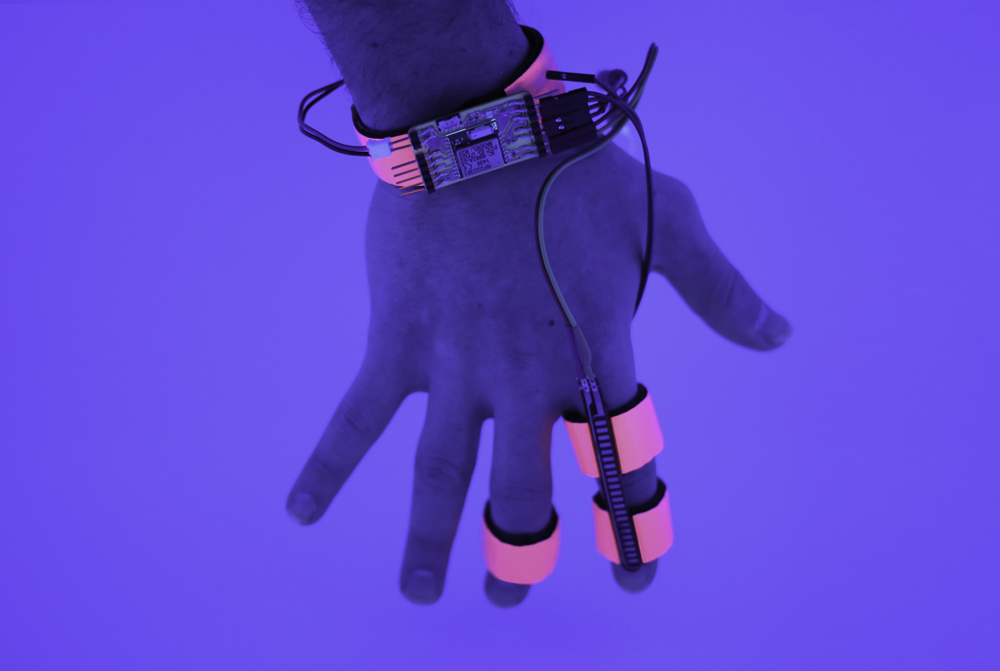 The transitional state between wakefulness and sleep have fascinated scientists and creatives alike for thousands of years. Known as hypnagogia, many have been fascinated by this in-between state of consciousness that exists just before the onset of sleep — from ancient philosophers like Aristotle, modern-day artists like Salvador Dali, to inventors like Nikola Tesla and Thomas Edison. It is a vivid realm where hallucinations, semi-lucid dreams and other fluidly creative ideas might surface, just before we plunge into the embrace of deep sleep.

So it makes sense that inventors and creators have historically attempted to gain and maintain greater access to this state — it’s a potential source for inspiration and wild, creative ideas that might not be available elsewhere. Offering a foothold into this mysterious state of dream-like creativity is the Dormio, a prototype by MIT’s Media Lab that offers a system for interfacing with this transitory state just before sleep, for heightening control of one’s dreams.

Led by MIT graduate student Adam Horowitz, the Dormio project is inspired by the story of how Edison was able to hack into this state of half-wakefulness in order to boost his creativity. Edison was known to take short naps during the day, holding steel balls in his hands. During these power naps, Edison would intentionally enter a hypnagogic state to experience “microdreams” that would often provide deeper insights into design problems. After some time, as he was just about to fall asleep, Edison’s hands would relax and release these steel balls onto the ground with a loud noise, effectively waking him up just before he actually fell into deeper stages of sleep. As Horowitz writes on his website:

“In this project we modernize this Steel Ball technique. [..] With this Dormio system in place we are able to influence, extract information from, and extend hypnagogic microdreams for the first time. The Dormio system uses biosignals to look out for the transition from hypnagogia into deeper, unconscious non-REM stages of sleep. It interrupts that transition using audio, but uses this audio as an opportunity — because past work shows that hypnagogic dreams are subject to inception by outside audio. Your wakeup trigger thus becomes your dream.”

According to Motherboard, the team’s current version of Dormio involves users putting on a glove that’s equipped with a flexion sensor (also called bend sensors), which measures the amount of deflection caused by the user’s hand in bending the sensor. The system also includes the monitoring of biosignals such as the heartbeat. 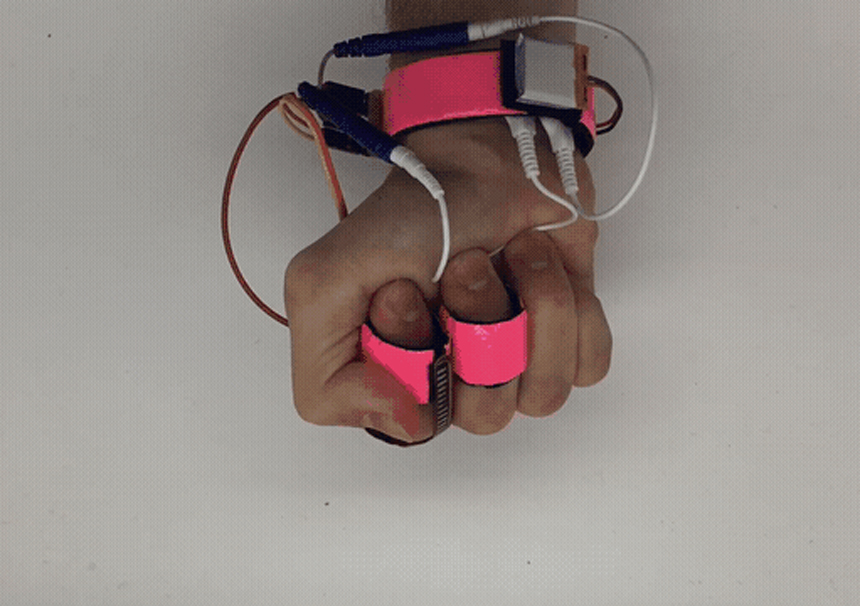 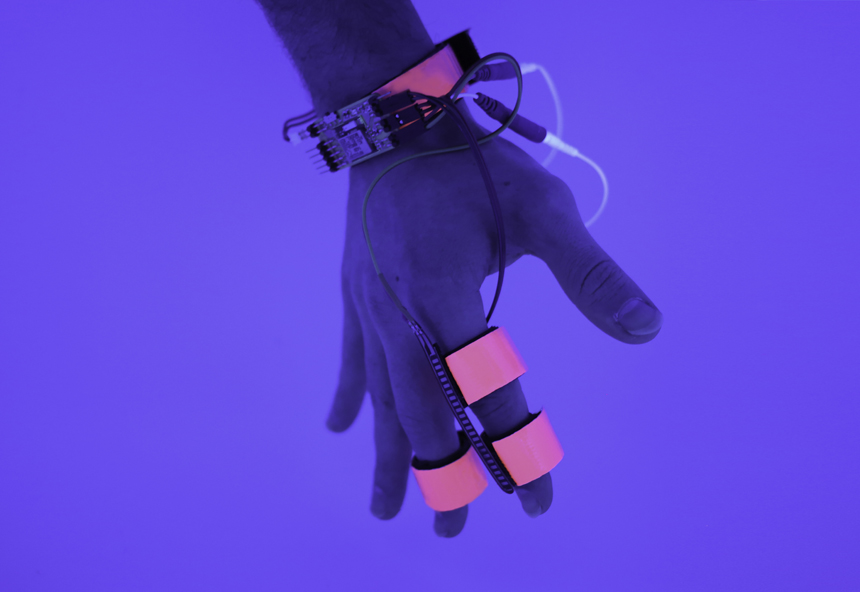 During the team’s experiments, six participants wearing the glove were instructed to lie down and clench their hands while awake. As they gradually began to fall asleep, their hands would relax, and the glove’s sensors would indicate loss of muscle tension, which would then trigger an custom audio message to be played — either from a smartphone app or a connected robot — that would prompt them to think of something in particular. 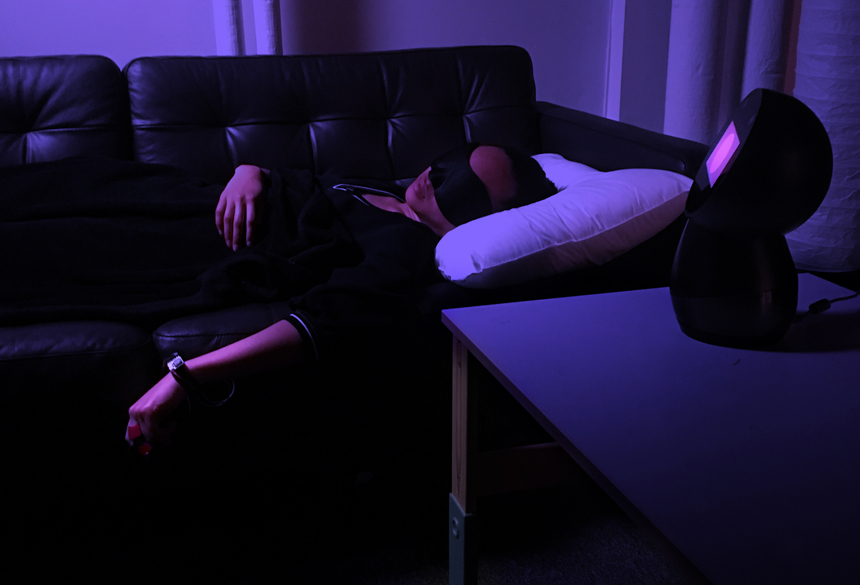 In this study, volunteers were prompted to think about either a fork or a rabbit as they entered the hypnagogic state. During this time, the prefrontal areas of the brain are less active, resulting in less “self-censorship”, more divergent thinking and free association in the sights and sounds imagined by the participant — some of which were verbally expressed and recorded by the app or robot.

Once the individual appeared to be transitioning from hypnagogia and entering into deeper, non-dreaming stages of sleep, another message would be played that would wake them up. Further testing involved volunteers crafting a creative story after their Dormio session, which was compared with the control case of creating a story without the use of Dormio. The final results suggest that the majority of volunteers did experience some kind of creativity boost and more motivation after using the Dormio system.

The team is now working on an even less invasive version of Dormio that would detect the transition into hypnagogia by monitoring eyelid movement instead. In any case, Dormio is one of the various “sleep interfaces” that MIT researchers are working on — after all, we spend one-third of our lives asleep, and these nebulous states of unconsciousness and dreaming are one of the last true frontiers that we’ve yet to fully explore, much less exert control over. Ultimately, there’s no doubt that such systems for interfacing with these great unknowns will prove to be profoundly meaningful for our collective evolution as a species.