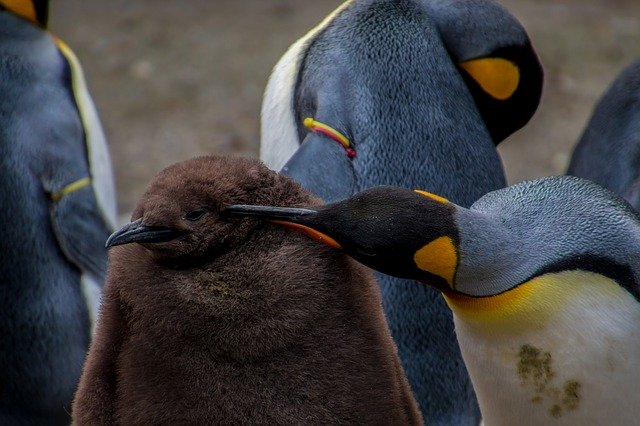 It has been said that the Linux command line is cryptic and difficult to learn. But I’d call it comprehensive. Like anything else, you need to know a few fundamentals to get started putting the system to work doing important computing jobs. The Linux command line is very powerful. Of course, with that power comes user responsibility and the potential to do harm. Knowing what to do is important, but so is knowing maybe what not to do.

Don’t let it intimidate you. That’s just the way it is.

In my Embrace the Linux Command Line post a few months back, we discussed a few commands you could type into a terminal window on a Raspberry Pi. Linux being ubiquitous, you can do the same thing on a notebook, desktop or server. For that matter, the command-line works great if you remotely use it without a window manager and windows over a network connection.

Today we’ll explore a couple of areas you should be aware of that will help you make good command-line decisions.

You’ve probably heard of the rm command. rm removes files from the system. It is an extremely powerful command and should be treated with appropriate respect.

Like other Linux programs, rm has a handful of command-line options. Type “rm –help” to get a listing. 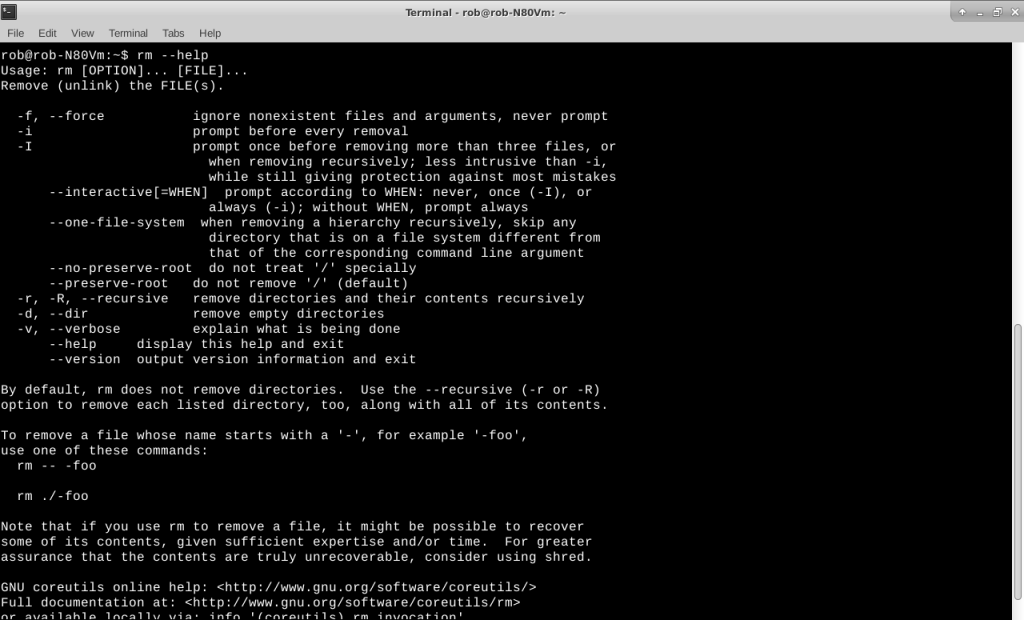 A particularly notorious rm usage is with the -R option and an “*” for the file names. It has caused much heartache among system administrators.

The –R option orders rm to travel down into the sub-directories. The * means match ALL files that it finds. You can easily get rid of a lot of files, very quickly, this way. It’s particularly unsettling if you execute the command at the top-level (/) directory as the root user, which has god-like powers on a Linux system.

Suppose you were a busy, somewhat inexperienced system administrator doing some clean up on a Sun Unix machine. That was me, logged in as root, many moons ago. I was flipping around through the directories getting rid of old log files and cleaning out unused files when it happened.

Somehow I had issued a cd / to take me up to the topmost directory. I must have been distracted because I thought I was still in the log directory. About three seconds after typing “rm -R *” and hitting enter, I realized my error. It was too late.

About a minute later I heard grumbling from the two users I knew were on the machine. It was a small ComputerVision — Sun Microsystems Unix-based CAD graphics system, so the real damage came from the tool designers losing the changes they had made to their CAD models that morning. It happens. Most every Unix or Linux system administrator has made a similar snafu.

Needless to say, I had to spend the remainder of the day and that night rebuilding the system from tape and backups. I had backups of the user data from the previous day so we lost maybe four hours of production work. The tool designers also had to do other work while I repaired their system. More lost production time, now for two people. I was in the doghouse for a little while after that one.

Fortunately, as a regular user, you aren’t likely to wipe out your machine with the rm command. You can remove your own files inadvertently, though, so always make sure you know where you are in your directory structure. And, use the “rm -R *” combination sparingly with rm.

It might be instructional to burn a micro-SD with Raspbian Linux and put it in a Raspberry Pi. Then execute “rm -R *” at the / directory as root, to see what happens. You can always just re-burn the micro-SD to get a new system back again. Might as well get the worst over with and out of the way.

A typical time when you might run into trouble with rm is when your disk is or almost full and you have to scramble to clear out some files. Sometimes you’ll get a message in a terminal saying you are out of disk space. The machine might not crash when you fill up the disk. So, you probably have a little time to get rid of some files and reclaim some space.

We can find out the status of the disk with the df command. 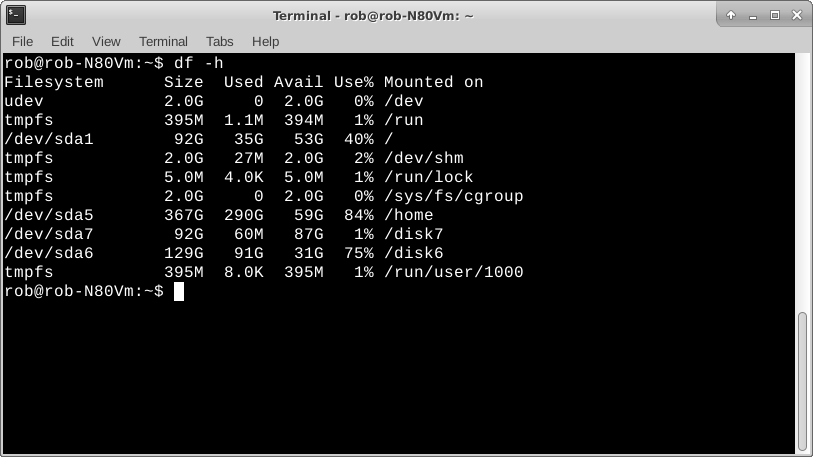 I like to use the -h command-line option so I can see the file space sizes in mega and gigabytes.

There is a 750GB disk in my antique ASUS Linux notebook. You could just use the whole disk for your computer, although I like to divide it into “partitions.” Partitions break up the disk space and associate each section with a /dev name. That way I can have the Linux operating system and applications in one partition and my user files in another partition. When I periodically upgrade to a new version of Linux, I just reformat the root (/) directory and copy a new Linux image on top of it. This has no effect on user files out in the /home directory. I associate the /dev/sda1 partition with the / directory. The /home directory is tied to the /dev/sda5 partition.

Looking at the df listing above we can see that the root file system (/) is /dev/sda1 and is sized at 92GB. I’ve only used 35GB for the operating system and applications, which is about 40% of the total partition space. There are about 53 GB still available for more system and application files.

Further down in the listing is the /dev/sda5 partition, associated with the /home directory. If you see the use percentage up above 95%, it might be time to delete unused files or move some of them into another partition or onto an external archive drive.

The cp command copies files from one place to another. mv moves files around.

Using both are pretty straightforward. Here are a couple of examples.

The first one copies one file to a new name. The second one renames the rob.txt to test.txt.

We kind of get back to that user responsibility thing with mv, so again, be cognizant of where you are in the directory tree and what you want to actually do with your files.

The Linux command-line is a powerful tool for all types of computing jobs. It is a little dangerous because there aren’t a lot of safeguards built-in to keep you out of trouble.

Knowing about some of the pitfalls will help you make good command-line decisions. Mistakes will be made and it’s just part of the learning process. Stick with it and move forward. Sometimes it takes a little while. Linux is very comprehensive.

Rob "drtorq" Reilly is an independent consultant, writer, and speaker specializing in Linux/OSS, physical computing, hardware hacking, the tech media, and the DIY/Maker movement. He provides a variety of engineering, business and special project services to individual clients and companies....
Read more from drtorq
SHARE THIS STORY
RELATED STORIES
Intel Poaches Open Source Execs from Netflix, Apple to Boost Linux Efforts New Linux Laptops Come with Right-to-Repair and More Ubuntu Linux and Azure DNS Problem Gives Azure Fits Intel to Continue Buying Spree of SaaS Vendors Kubernetes 101: Install Kubernetes on Rocky Linux
SHARE THIS STORY
RELATED STORIES
Rust in the Linux Kernel How to Create an Object Storage Bucket with MinIO Object Storage Add Object Storage to Rocky Linux with MinIO Google Ups Its Linux Security Awards Install Ansible on Ubuntu Server to Automate Linux Server Deployments
THE NEW STACK UPDATE A newsletter digest of the week’s most important stories & analyses.
The New stack does not sell your information or share it with unaffiliated third parties. By continuing, you agree to our Terms of Use and Privacy Policy.