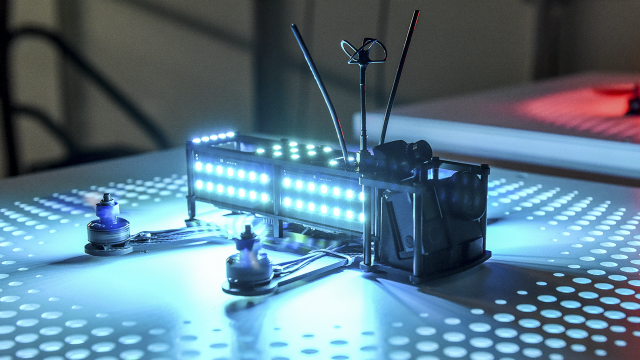 “The dream of flying has been part of the human psyche since the beginning of time. Today that dream takes a new form,” boasted the latest video from the Drone Racing League (DRL).

A grand statement to be sure, but the League’s assertion may carry a kernel of truth.

The DRL is one of a number of outfits exploring the emerging world of drone racing. Across their events, there’s a consistent theme emerging — that these young drone pilots are not just enjoying themselves, but also inventing a new sport. As one commenter wrote on the DRL site, drone racing feels like skateboarding in the 1990’s, “with a small group of people pushing the envelope and inventing every day.”

In any case, interest is growing fast. On Tuesday, the Drone Racing League (or “the DRL”) was featured in a Bloomberg Business article touting the league’s aspirations to be the next NASCAR. And by Thursday, the league had earned an enthusiastic profile at Time.com.

Following up on this wave of media interest, DRL launched a major publicity push this week. The outfit published the first four blog posts last weekend, and using the most suitable medium for showing off this sport, uploaded 17 tantalizing videos throughout the week onto its new YouTube feed.

The most recent one appeared Thursday — titled “Gates of Hell: the Dream Takes Form.”

The new drone league is sharing their footage with a handful of top news sites. Quartz racked up over 16 million views within just two days after revealing 90 seconds of continuous footage from an onboard camera mounted on one of the league’s flying drones.

“There’s now a drone racing league that feels like pod racing from Star Wars,” gushed Quartz’s enthusiastic headline. As the camera whizzes over the seats of an empty stadium, a subtitle explains its role in a larger marketing plan. “The Drone Racing League is betting that videos like this will find big audiences online and will one day fill stadiums with screaming fans.”

As the camera tilts, the subtitle warns “You might find this part makes you nauseous.” But the slick high-definition footage of the buzzy flying robots is being heard online. 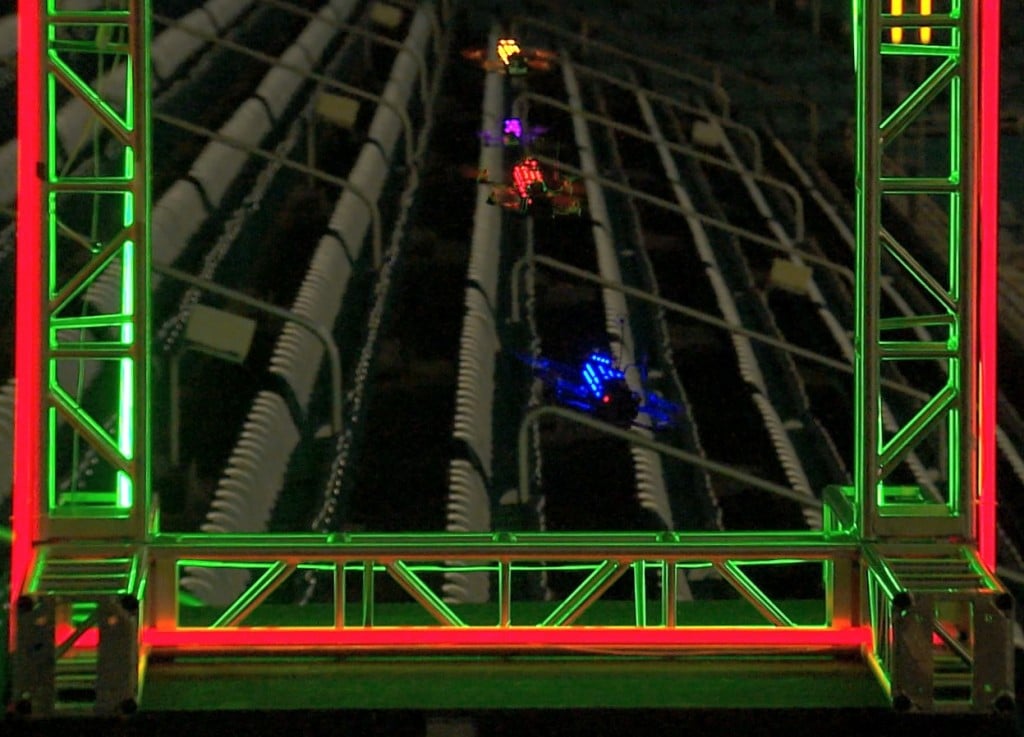 They’re sharing their own piece of continuous footage from a flying drone — more of the exhilarating “first-person view” (or FPV) that’s becoming a kind of trademark for the league — which has also been provided courtesy of the Drone Racing League. The video shows the course from the league’s “season opener” in December, a complicated race through the stadium for the Miami Dolphins and the first of six elaborate competitions. The league is now editing that footage for its release in March.

That video’s release should coincide with the league’s next live event, reportedly scheduled for March, and referred to as “L.A.Pocalypse.” According to Quartz, it’s an abandoned mall in Los Angeles, although the league prefers to describe it as “An abandoned venue – a 40-acre relic of 70’s suburban excess. The perfect backdrop for the second race of the season.” 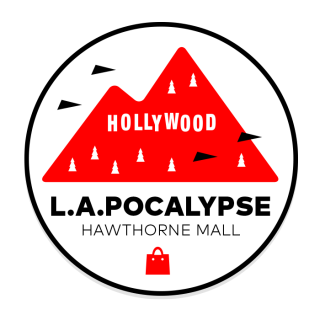 Fans are expected to tune in to the league’s drone races online, according to Bloomberg though it’s possible they could one day experience the races using virtual reality headsets. And there’s ultimately big money at stake. Game-streaming services like Twitch generated $3.8 billion last year, according to estimates reported by Bloomberg, while professional video gaming brought in $750 million, mostly from advertising and sponsorships.

The league’s newest video — The Dream Takes Form — featured footage from a “preseason event” last July where six pilots competed on a course called Gates of Hell. “Top pilots fly head to head through a concrete steampunk torture chamber with cast-iron columns and massive hulking turbines from another era,” explained the league’s Web page. The slick video features live-action footage of both the drones and their pilots, as well as computer animation showing the event’s tricky course. It even includes backstories on the pilots, like a reality TV show, and a suitably portentous voiceover:

DRL is not the only game in town. A total of 32 pilots have already competed in last year’s UK Drone Nationals. And this October Hawaii is hosting the 2016 World Drone Racing Championships at an event called Drone Worlds. On March 11th, Dubai will even begin hosting the World Drone Prix, promising $1 million in prizes and “The greatest race in history, taking place above you.” But their tagline speaks to the real significance of the event: “Create the sport of the future that inspires billions.”

“Horbaczewski and his team are taking on two big challenges at once: building a sport, and building a business,” Bloomberg Business summarized.  “[T]here’s a lot of different business models for this,” Horbaczewski told Time. Bloomberg also notes the presence of “a number of strategically-installed smoke machines” to amp up the drama.

“They’re making this into a real-life video game,” one pilot tells the reporter.

But maybe the real story is the enthusiasm of the pilots themselves. From all around the world they’ve started gathering, from Mexico, Australia, and Brazil, from Buford, Georgia, and from Wading River, New York, to enjoy the new thrill of drone racing.

A blog post titled “Why We Fly” appeared last weekend on the league’s website, succinctly explaining the addictive thrill of wearing goggles and experiencing the immediacy of a flying drone.

“Seeing yourself from the aircraft in the sky for the first time is confusing and your body moves around when the drone turns. The controls don’t perform like xBox or any video game – it’s real life physics, not a simulation. At first, it’s tough, it feels wrong and it’s difficult.”

But once pilots get used to it, “you can fly. You can move around in three-dimensional space at will. Fast and nimble, with far greater agility found in cars, motorcycles or airplanes. The rush of speed. Your heart will start to pound, your hands will sweat. You get anxious, nervous.

“You become the drone.”

SHARE THIS STORY
RELATED STORIES
Platform Engineering Won’t Kill the DevOps Star A Leg-endary Year: Top 5 Internet Technology Stories of 2022 Java's James Gosling on Fame, Freedom, Failure Modes and Fun Golden Paths Start with a Shift Left It Happened to Me: How I Suddenly Owed AWS $13,000...
SHARE THIS STORY
RELATED STORIES
5 Ways ChatGPT Could Supercharge Chatbots Entrepreneurship for Engineers: Building for Customers’ Love How Jit Builds a Platform Engineering Mindset in the Cloud Entrepreneurship for Engineers: Avoiding Feature Bloat Snack Stack: Turning Winter Comfort Food up to 11
THE NEW STACK UPDATE A newsletter digest of the week’s most important stories & analyses.
The New stack does not sell your information or share it with unaffiliated third parties. By continuing, you agree to our Terms of Use and Privacy Policy.