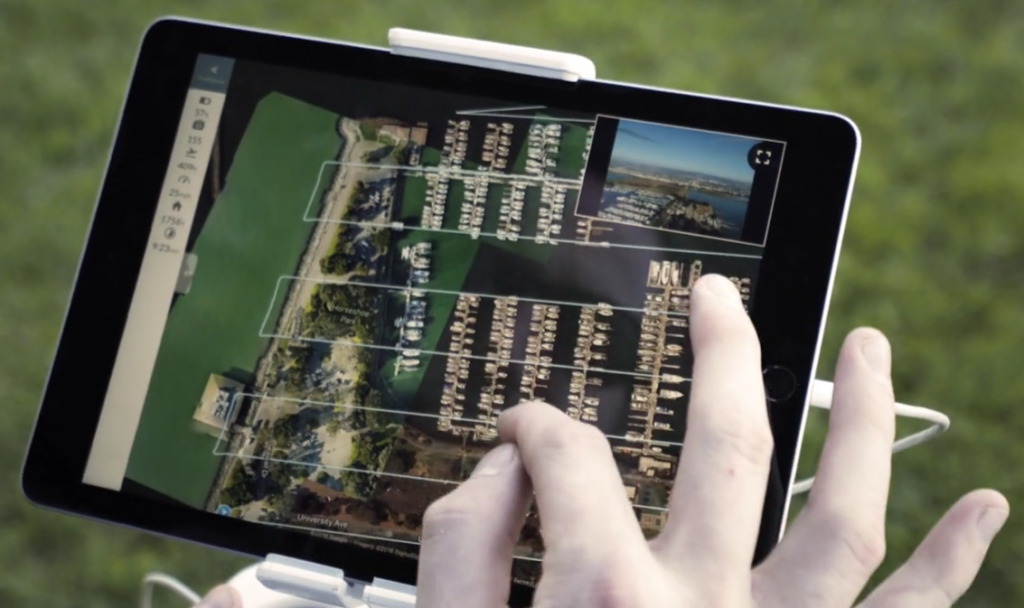 As drones drop in price and grow in capability, we’re seeing an array of new uses for the small, unmanned aerial systems, with news reporting — here’s some footage of recent flooding in my hometown of Louisville — and real estate among them.

DroneDeploy, a San Francisco-based startup, recently launched an iOS-based application to enable folks in industries such as construction and agriculture to use drones and develop maps in real time.

California’s Sonoma fires, in which responders needed to use maps to order evacuations and plan firebreaks, are an example in which real-time maps would be vital, according to Nic Pilkington, CTO and co-founder of DroneDeploy.

“It’s been the expectation that you collect a bunch of photographs, then you wait a number of hours processing that data, where you have to get it to the cloud or get it to your desktop, and then you can use the result. We’re saying all that takes place in the field and immediately. You go to the job site, put the drone in the air, you’ve got data, you can start making decisions immediately. We think there’s a huge amount of value in that,” he said.

Last fall, DroneDeploy worked with first responders and pilots on the ground after Hurricane Harvey to assist with disaster relief efforts in Texas.

Goldman Sachs predicts drones will evolve into a $100 billion market by 2020 with demand driven by commercial and government sectors.

There was a clear move in the industry toward drone software in 2017, according to Drone Industry Insights, with the realization that data, not the drones themselves, provide the real value for customers. It noted that APIs and approaches that allow drone data to be integrated into existing processes have quickly become a requirement.

Jono Millin, Michael Winn and Pilkington moved to the United States and founded the company in San Francisco in 2013.

“The hardware in the drone space was very capable. You could do some really cool things. Drones were starting to fly themselves. They were starting to appear with high-quality cameras. But the task of repeatably going out with a drone and getting something done, like making a map, was almost impossible,” Pilkington said.

“There was cool hardware, but it was almost a science experiment. There was so much that could go wrong. It wasn’t like a kettle or a toaster, where you push a button and know what’s going to happen. Given that, there was no way big companies could adopt this sort of technology without a piece of software that took control of everything. It needed to be easy use – simple, reliable – and that’s what we set out to do.”

DroneDeploy offers solutions for farming, mining, construction, inspection, roofing and mining. It also has a marketplace with integrations with existing tools like Box, John Deere and Autodesk.

Data can be exported in commonly used formats or users can use open APIs to sync data with everyday tools.

Its phone- or tablet-based mapping and software-only focus differentiates the company from competitors, some of which include SenseFly, Maps Made Easy, PrecisionHawk and Identified Technologies.

Pilkington said it will work with any existing drone hardware.

“We just provide the software. Our feeling is that the hardware space is going to become commoditized. The quality of the drones is going up, the cost is going down and we want to focus,” he said.

The software has been a three-stage process: fly, process and analyze.

It’s merging the process and analyze functions in the Live Map app.

“Livemap was designed to remove all those constraints: the need to upload any imagery, the need to have a data connection and the need to wait to process any data. We do that all on the mobile phone now,” Pilkington said. “The drones that are flying are taking really high-quality video streams, and we’ve got photogrammetry running on the mobile device while the drone is still flying.”

Data is stored on the mobile phone, an incremental orthomosaic (geometrically corrected image) that’s built up from the video stream. As soon as the phone gets a data connection, it syncs to the cloud platform where users can manipulate high-resolution still images to share and collaborate.

While the maps might look like just photographs taken from the air and laid down on the ground, they’re not, he said.

There are two problems with that: one is the photographs wouldn’t line up on their edges. There’d be gaps and discontinuities – drones’ GPS only covers about 3 square meters, Pilkington said. You’d have a road that doesn’t continuously span a number of images. So the problem is accurately stitching them together.

The other issue has to do with perspective: If you take a photograph from the air of a rooftop, the part nearest you is going to have more pixels and be bigger than the roof edge at the far end. You can’t measure lengths, distances or areas, because those haven’t been rectified, which removes distortion.

It developed its own photogrammetry program to deal with these issues.

I asked Pilkington whether drones would put my friend, who makes extra money as an estimator for her family’s roofing business, out of a job. Most likely it would merely eliminate the need to climb up on those roofs.

“Our hope is that this will let people focus on the aspects of the drone business that aren’t tedious,” he said. “Things like flying aren’t that important — we want them to be done as quickly and easily as possible. This lets people do more in a day, spend less time at the site, focus more on delivering the data and doing more jobs in a day.”

Customers include SunPower, which uses the software in building massive solar farms, and McCarthy Construction, one of the largest U.S. contractors, which uses it to improve efficiency and job site safety.