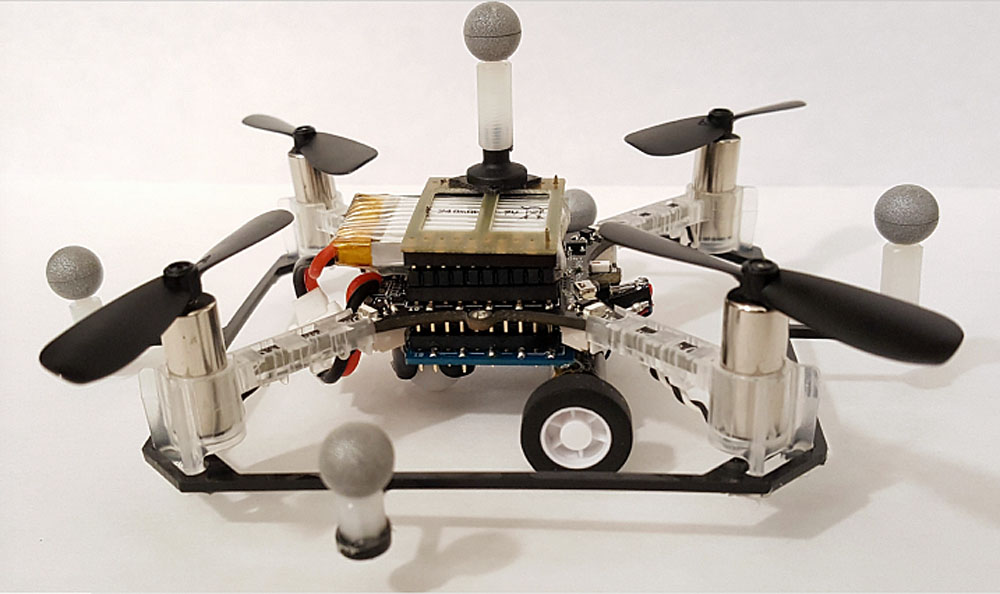 Flying cars have been a futuristic staple in the popular imagination for a long time now. While a mass-manufactured personal automobile that can actually fly has yet to be realized, researchers at MIT’s Computer Science and Artificial Intelligence Laboratory (CSAIL) recently tested prototypes of drones that can not only take to the air, but are capable of driving on the ground as well. Check them out:

Such airborne yet road-worthy drones would solve a few of the design problems that conventional drones now suffer from. For starters, it would tackle the issue of battery life: while flying drones are more agile than a ground vehicle, they require a lot of power, meaning that battery life becomes a limiting factor in how far they can travel before needing to be recharged. Flying drones also find it difficult to maneuver into tight spaces. Conversely, ground vehicles are more energy efficient but move more slowly.

“The ability to both fly and drive is useful in environments with a lot of barriers since you can fly over ground obstacles and drive under overhead obstacles,” said Ph.D. student and lead author on the team’s paper, Brandon Araki. “Normal drones can’t maneuver on the ground at all. A drone with wheels is much more mobile while having only a slight reduction in flying time.”

The CSAIL team recently presented their design at IEEE’s International Conference on Robotics and Automation (ICRA) in Singapore earlier this month. It appears that this new prototype merges the best of both worlds, while also presenting some interesting approaches as to how a fleet of drivable drones might be organized so that they don’t crash into one another. 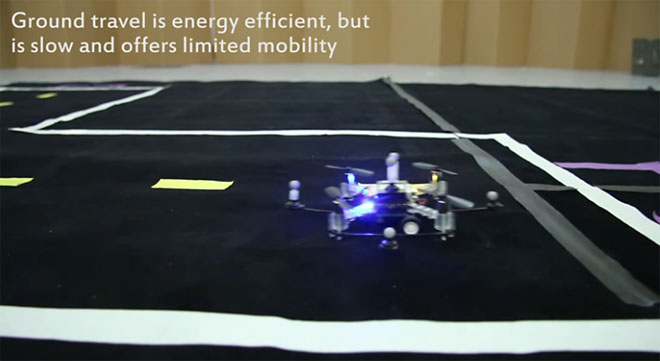 In the team’s experiments, eight quadcopter drones were made to fly and drive through a small-scale, urban-like landscape with buildings, roads, parking areas, landing pads and no-fly zones. These multipurpose drones build on Araki’s previous work in building the Picobug, a tiny legged and winged machine that is modeled after the male stag beetle and is capable of not only flying but also crawling, hopping and grasping with its small feet.

Like the Picobug, these latest prototypes can drive themselves around, thanks to two miniature wheeled motors at the bottom of each drone. To ensure that these eight autonomous drones don’t collide with each other, the team worked out different “path-planning” algorithms that guide them during operation in the air and on the ground, and which also determine the optimal tradeoff between energy use and speed. 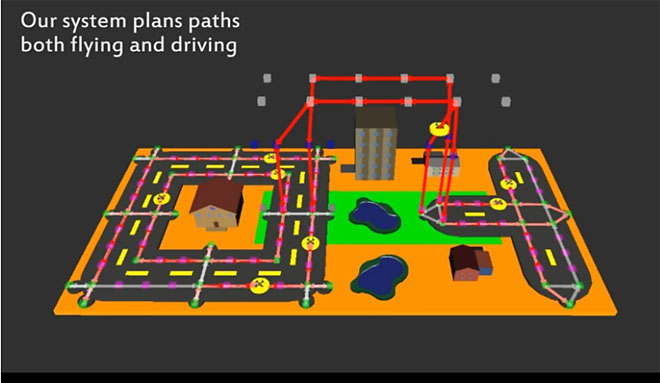 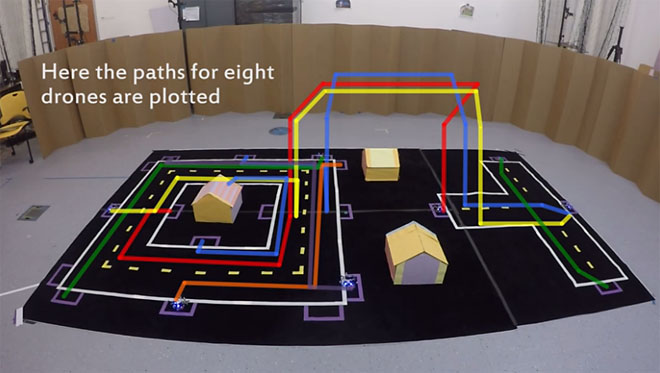 The team’s trials had all eight drones deployed at the same time, each following their own path autonomously. No accidents occurred, and researchers found that the machines could fly for 90 meters (290 feet) or drive for 252 meters (826 feet), before needing to recharge their batteries. The team also discovered that by incorporating driving capabilities, the maximum distance that the prototype could be airborne was reduced by 14 percent, but this loss balanced out in the long run since the driving mode is much more energy-efficient than flying. Currently, the team’s system can support up to 80 dual-mode drones operating at the same time. 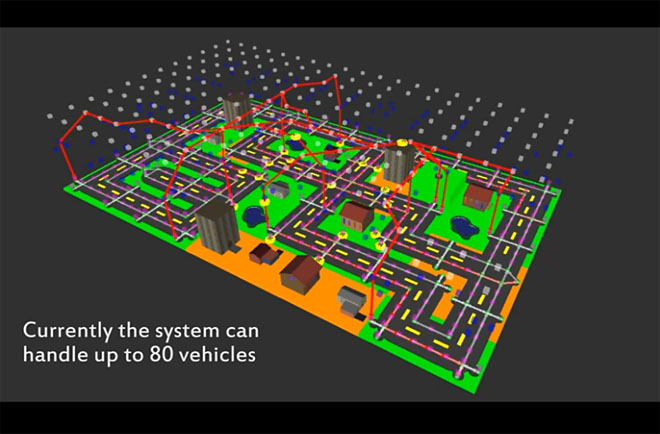 Besides navigating everyday roads, such a nimble and multi-moded drone could be useful in emergency situations, such as rescuing people after a natural disaster when roads are no longer usable, or increasing efficiency and reducing costs in transporting things or passengers.

While it will take some time before this design can be scaled up and implemented in the complex reality of real city streets and the surrounding airspace, this experiment demonstrates that an algorithmically based system to switch between different transportation modes is possible. Rather than attempting to build that mythical flying car, the team is proposing to focus on developing similar solutions using drone-based research.

“As we begin to develop planning and control algorithms for flying cars, we are encouraged by the possibility of creating robots with these capabilities at small scale,” said CSAIL director Daniela Rus. “While there are obviously still big challenges to scaling up to vehicles that could actually transport humans, we are inspired by the potential of a future in which flying cars could offer us fast, traffic-free transportation.”

Read more over at MIT News.

SHARE THIS STORY
RELATED STORIES
State of the API: Monetizing API Deployment Is on the Rise 5 Security Principles to Guide Your DevSecOps Journey How New Sony AI Chip Turns Video into Real-Time Retail Data Improve the Quality of Your APIs with Spectral Linting How to Get Started Filling 3.4 Million Cybersecurity Jobs
SHARE THIS STORY
RELATED STORIES
Azure Went Dark GPTZero: An App to Detect AI Authorship Entrepreneurship for Engineers: Avoiding Feature Bloat How Platform Engineering Can Improve DevOps Collaboration Devs Most Likely to Learn Go and Rust in 2023, Survey Says
THE NEW STACK UPDATE A newsletter digest of the week’s most important stories & analyses.
The New stack does not sell your information or share it with unaffiliated third parties. By continuing, you agree to our Terms of Use and Privacy Policy.