The Eclipse Foundation has released the first production-ready version of the Eclipse Theia code editor, calling it "a true open source alternative to Visual Studio Code." This 1.0 release, however, is not targeted towards end-user developers, but to the community of dev tool builders who have discovered that creating an integrated development environment (IDE) is more difficult than they predicted.
Mar 31st, 2020 8:00am by Mike Melanson 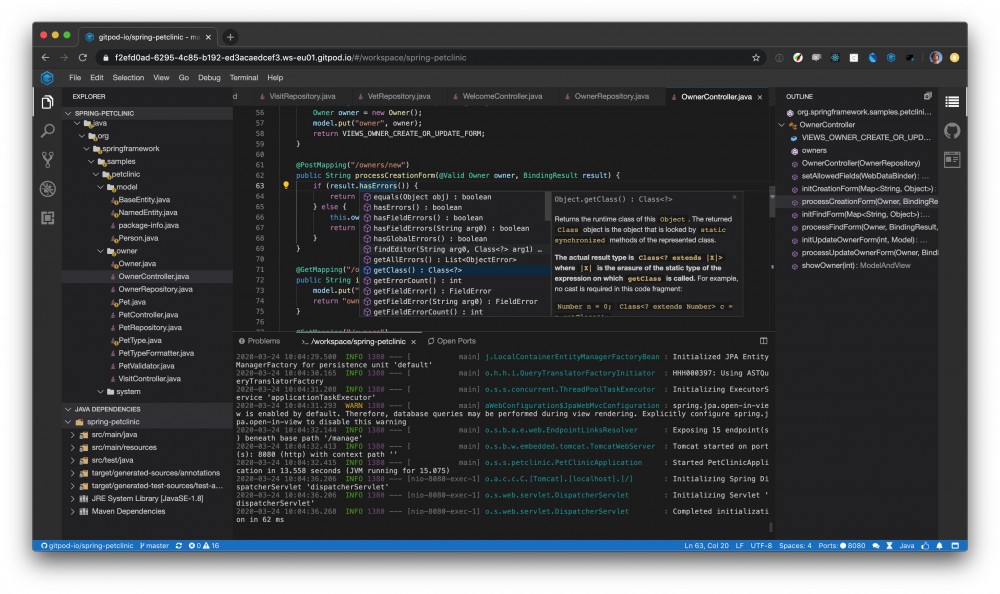 The Eclipse Foundation has released the first production-ready version of the Eclipse Theia code editor, calling it “a true open source alternative to Visual Studio Code.” This 1.0 release, however, is not targeted towards end-user developers, but to the community of dev tool builders who have discovered that creating an integrated development environment (IDE) is more difficult than they predicted.

Chances are, you have already used Eclipse Theia in some form without even knowing it — the open source project serves as an extensible platform for developing multi-language cloud and desktop integrated development environments (IDEs) such as Red Hat’s CodeReady Workspaces, the Eclipse Foundation’s own Eclipse Che, and Google Cloud Shell. Now, with Eclipse Theia 1.0 available, Milinkovich says that he sees an opportunity for that to only grow, comparing the situation to that of the Eclipse IDE when it arrived in 2001.

As far as Eclipse’s claim that Theia is the “true open source alternative to Visual Studio Code,” Milinkovich points out that, while VS Code is released under an MIT license, the VS code that you download and use as the developer is delivered under a Microsoft End User License Agreement, with the extension registry also containing some usage restrictions. The VS Code extensions themselves, however, are built around an open API standard and are fully supported in Eclipse Theia, and Milinkovich says that they are working on “creating a vendor-neutral extension repository that will not be tied to any particular product.”

While there are many comparisons made between Theia and VS Code, Milinkovich says that the focus right now is more on using Theia to build developer tools for specific verticals and use cases.

“This release is targeted at adopters, not necessarily end-user developers. We don’t have a download for a developer to grab it and download it and run it as a desktop tool. That isn’t the plan. That is in the roadmap for a future release, but the initial focus for this 1.0 is that this is production-ready for adopters to grab it and build their products with it,” said Milinkovich. “Building developer tools is actually harder than a lot of people realize. It’s a common mistake to think ‘how tough can it be to build a text editor and a file system browser? What more do you really need?’ It turns out to actually deliver a professional experience for developers, there’s a lot of work that goes into it.”

Sven Efftinge, project lead for Theia and CEO of both Gitpod and TypeFox, points to Theia’s adoption of VS Code extensions as one that quickly puts it on par with most any other IDE on the market.

“When you come up with a new IDE, there are a lot of problems you have to solve, but the biggest problem is how do I get all the support for the hundreds of programming languages out there in decent quality. We do that by leveraging an existing community,” explained Efftinge. “Theia is the first cloud IDE that really does everything a professional desktop IDE does, but in the browser. So far, browser IDEs have always been playgrounds and insufficient in many cases, lacking good language support, and so on. By leveraging what the community has built, this is kind of now solved and is really on par with desktop applications.

Mike is a freelance writer, editor, and all-around techie wordsmith. Mike has written for publications such as ReadWriteWeb, Venturebeat, and ProgrammableWeb. His first computer was a "portable" suitcase Compaq and he remembers 1200 baud quite clearly.
Read more from Mike Melanson
SHARE THIS STORY
RELATED STORIES
What to Do When You Don’t Have Time to Test Your Microservices Wellspring of Creativity: Why Public Domain Matters Top 5 Internet Technologies of 2022 What TypeScript Brings to Node.js Why Web3 Needs a Real-Time Data Layer Now More Than Ever
SHARE THIS STORY
RELATED STORIES
ScyllaDB's Take on WebAssembly for User-Defined Functions What TypeScript Brings to Node.js How We Managed to Test the ‘Untestable’ Build Your Own Decentralized Twitter, Part 3: Hello Mastodon Why a Twitter Founding Engineer Is Now All-in on Mastodon
THE NEW STACK UPDATE A newsletter digest of the week’s most important stories & analyses.
The New stack does not sell your information or share it with unaffiliated third parties. By continuing, you agree to our Terms of Use and Privacy Policy.