EmpowerUs At KubeCon: How Can Women Gain Influence In Tech? 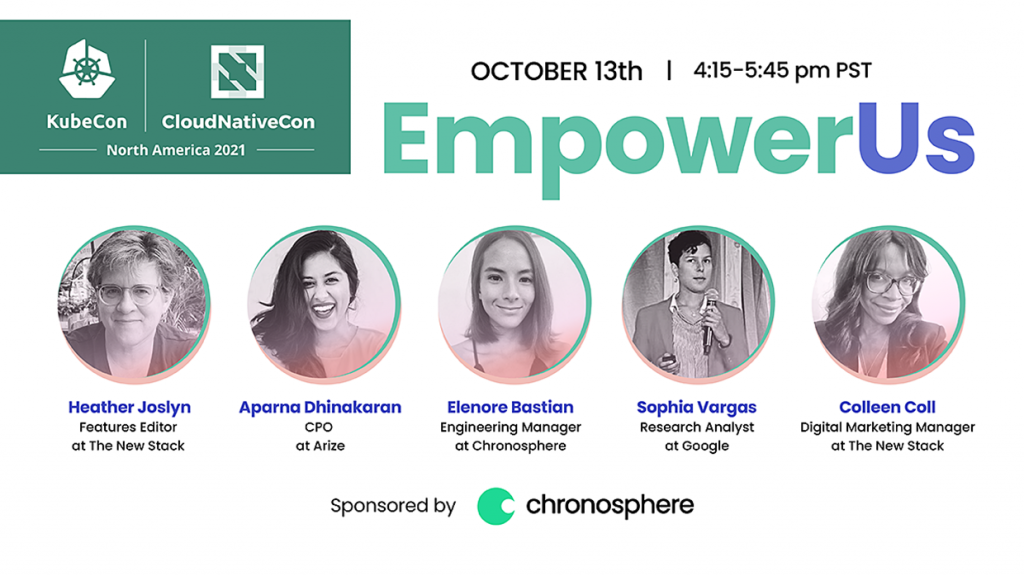 Women make up half of the U.S. workforce overall, but in tech jobs, we’re woefully underrepresented: Depending on the source, the reported figure hovers in the mid-20s/low-30s percentile.

Or maybe it’s worse: The latest Stack Overflow Developer Survey found that women made up just under 5% of professional developers. Among U.S. respondents in the survey of more than 83,000 software developers worldwide, just over 9% identified as female or non-binary.

We’ve heard these doleful stats for a long time. While waiting for the numbers to move, what can women and non-binary people in tech — and their allies — do to carve out influence in their organizations and industry?

The EmpowerUs panel I’m hosting this Wednesday at KubeCon + Cloud NativeCon North America — available only to in-person attendees of the Los Angeles event — will try to provide some answers.

EmpowerUs, sponsored in this edition by Chronosphere, aims to bring women, non-binary people and their allies together to network and share what they’ve learned.

Our panelists will include:

EmpowerUs has been a part of KubeCon + CloudNatveCon conferences for several years; in 2019 the event’s name was changed from the less-inclusive EmpowerHer.

Chronosphere decided to sponsor and organize the current EmpowerUs event because its goals align with its company’s values and initiatives aimed at diversity and inclusion, said Gibbs Cullen, developer advocate at the organization.

The company has an internal networking group called “Chronogals,” for instance. “We’ll do sessions every once in a while to just kind of talk through what’s top of mind, try to get to know each other more, and build that sense of community and support.”

In a recent meeting, Cullen said, it emerged that several women at the organization struggled with situations where they are not fully knowledgeable about a subject and feeling anxious about whether to reveal that by asking questions — the insecurity known as “imposter syndrome.”

Such conversations, Cullen said, “bring awareness to it, that it’s not you alone who are feeling this way.”

While the EmpowerUs session is aimed at women and non-binary people, Cullen hoped others will also attend to network and learn. “Everyone’s welcome. We want to make it inclusive and I know men probably feel the same pain points, in a way.”

My New Stack colleague Coll hopes the EmpowerUs panel will dig into issues beyond imposter syndrome — to what she called more “uncomfortable” areas, like the cost of conforming to an organization’s culture.

She found an allegory in the 2012 science-fiction film “Prometheus,” in which the android character David 8 dons an astronaut suit he doesn’t need — because, he tells his human colleague, “it makes you humans feel more comfortable.”

Getting a job in tech, for someone in the minority, can involve a similar go-along-to-get-along approach, she suggested. And once hired, she asked, “Do you stay that way, to make them comfortable?”

Or, she asks, once on the job, “Are we empowered to push back and take that risk? Would they be willing to take us for who we are?”

Our EmpowerUS panel hopes to give (and get) from our audience some practical strategies for dealing with and pushing back on day-to-day workplace behavior that marginalizes women, non-binary people, and others in the minority.

Join us Wednesday at 4:15 p.m Pacific in Platinum Ballroom D and E of the J.W. Marriott Los Angles L.A. Live for a lively discussion and bring your questions and stories for our panel. We hope you come away from our session with new ideas for not only navigating your organization’s culture, but thriving there.