What Would You Do with a Extra Programmable Finger? 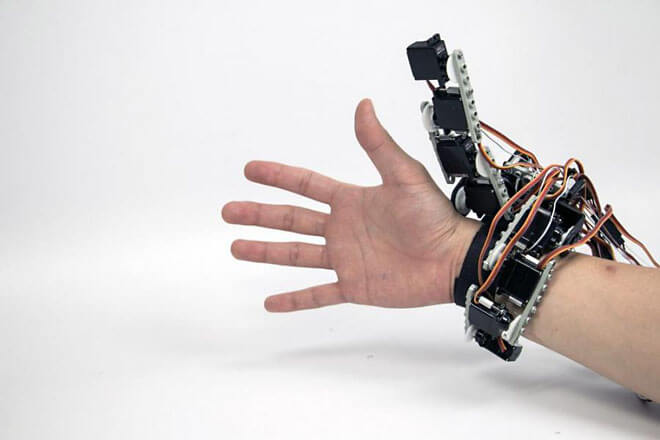 The evolution of the opposable thumb was a significant milestone in the development of modern homo sapiens. While it remains to be seen what the next significant round of evolutionary changes will look like, it’s quite possible that some of us may someday be robotically enhanced in some way, in a gradual integration of human and machine.

In this sense, wearables that seamlessly integrate with and augment human capabilities may be the next frontier. MIT’s Fluid Interfaces research group is exploring just that, proposing a robotic, jointed apparatus that acts as an extra finger or thumb, or even as another whole hand.

The prototype has been dubbed Robotic Symbionts, and is being described as a “body integrated programmable joints interface.” It is worn on the wrist and features eleven motors — linked together with LEGO, of course — that allow the various parts to work together in unison. The motors are controlled by electrical signals sent from forearm’s brachioradialis muscle, and can, therefore, be controlled separately from one’s actual hand, by flexing one’s forearm in different ways. Also, this robotic extension doesn’t move like your regular human-fleshed digits either; each part has a range of motion of up to 180 degrees. Watch it in action:

The device’s creator, Ph.D. student Sang-won Leigh explains on the project page that he envisions a future where human evolution is machine-driven and programmable. His robotic joints act as extra fingers — the next evolutionary prehensile appendage, if you will — that will allow a person to perform “tri-manual” tasks.

“Physical interfaces with actuation capability enable the design of wearable devices that augment human physical capabilities,” writes Leigh in the project paper. “Extra machine joints integrated to our biological body may allow us to achieve additional skills through programmatic reconfiguration of the joints. To that end, we present a wearable multi-joint interface that offers ‘synergistic interactions’ by providing additional fingers, structural supports, and physical user interfaces. Motions of the machine joints can be controlled via interfacing with our muscle signals, as a direct extension of our body.”

So what can extra, programmable machine joints do? For starters, it could act as a handy extra gripper extending from your wrist, capable of grabbing and holding objects up to one kilogram (2.2 lbs) in weight. It can also act as a supplementary surface, allowing you to write on a notepad or shoot a camera, using only one hand. The robotic joints could also move and work in tandem with your hand, for example, your hand turns a key to unlock a door, while your robotic joints operate the doorknob. 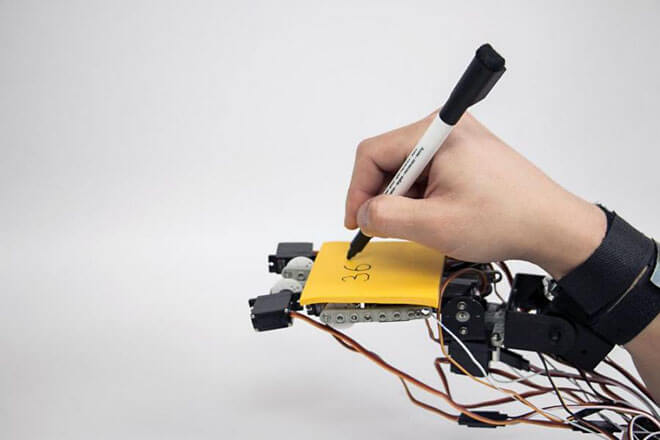 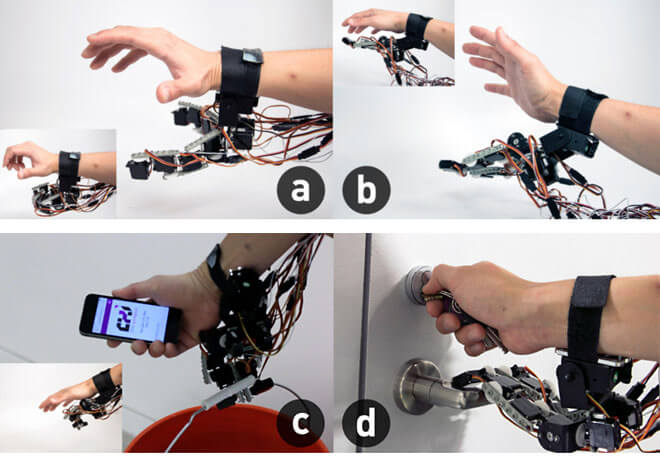 But that’s not all: the robotic joint can also be dynamically programmed as a haptic user interface, permitting it to respond to sophisticated gestures used to switch it between different active modes. It could also be programmed and slightly modified to act as a joystick controller that’s conveniently attached to your wrist, or as a “gun-trigger type of interface” that can provide force-feedback — after clicking, the apparatus “recoils” back to its original position.

The system can also be programmed to transform its shape to correspond with different “states”; in the case of the gun-trigger application, the trigger can lock up and change shape when ammunition is depleted, and unlock once the player has reloaded. 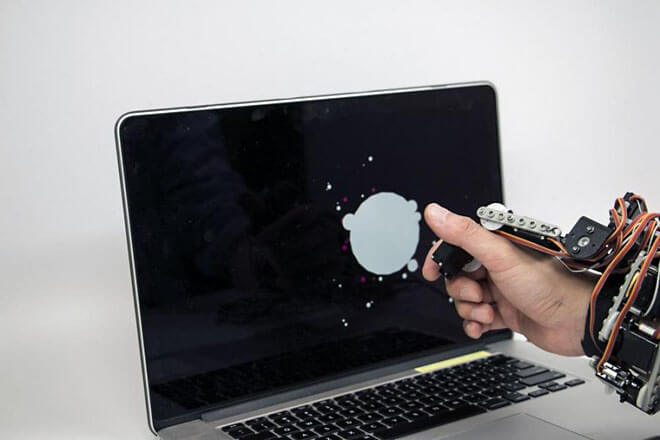 We can see that one of the prototype’s key features is its versatility. These body-integrated machine joints can be programmed to serve a variety of purposes, to shape-shift as needed within a wide range of potential applications, from a mechanical augmentation of the hand, to a portable user interface. The Robotic Symbionts’ multi-purpose concept would allow users to eschew the need for multiple devices and interfaces.

With further improvements, we may soon someday see all-in-one, programmable and wearable devices that not only extend our bodies’ physical capabilities but could potentially allow us to control wirelessly or interface with objects at will — a pretty exciting, if not mind-boggling, prospect.