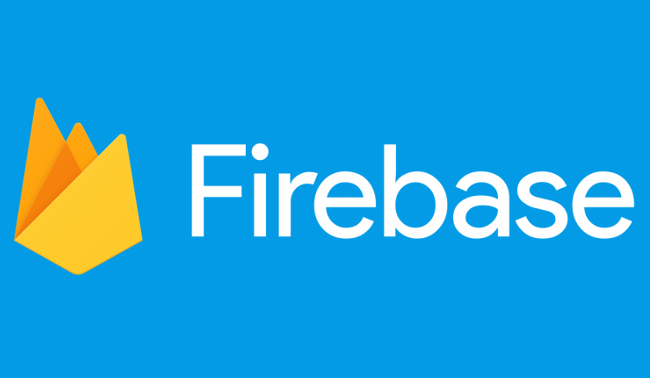 This week, at the second-ever Firebase Dev Summit, in Amsterdam, Google introduced an array of powerful new functionalities and features just added to the unified mobile development platform — including Google’s AI capabilities. Firebase’s user interface is also getting an overhaul, its console redesigned to organize products and information in clusters logically designed to help developers find what they need quickly.

When Google bought Firebase in 2014, the platform had 110,000 users; by 2017, Firebase has crossed the one million user mark. Firebase serves as a convenient combo plate of Google Cloud services and technologies, integrated into a single platform and curated to address challenges that developers typically encounter at each stage of the app development cycle.

“For the past 18 months we have been working to deeply integrate Firebase’s toolset across a lot of different products,” said Francis Ma, lead Firebase program manager, in an interview with TNS. “We are acutely aware that developers don’t use just one tool across an app’s lifecycle — they use many different ones. When these tools are connected and all working tightly together, devs can skip reinventing the wheel and just focus on building great apps, fast.”

Possibly the most significant addition is the addition of Crashlytics, the “best in class” crash reporting system first built by Twitter as part of its Fabric suite of mobile development apps. (Google acquired Fabric in January 2017). Crashlytics is a powerful and responsive tool that allows devs to identify and address, in real time, stability issues that erode app stability.

But beyond simply adding Crashlytics to the Firebase tool bench, the Google team has worked to integrate it into the platform’s other utilities. For starters, Ma said, users will be able to use Crashlytics to trigger Google Cloud Functions, as well as customize workflow. Like setting up push notifications so that you only hear about stability issues affecting crucial app functions, instead of constant bombardment about minor issues.

Google will roll out the integration over the next few months, though the curious can check out the beta now.

Integrating Fabric’s functionalities into Firebase was a timely opportunity to update the Firebase user interface.

The Firebase team based the redesign in part on “lessons learned” from the incoming Fabric team, as well as feedback from user research. “What we learned was that when devs come to the Firebase console, they are usually seeking the same metrics: daily active users, monthly active users, crash-free user rate, and total crashes,” explained Ma. “So we’ve made this four front-and-center for any apps in the project, plus we’ve added sparklines as a visual of how your app is trending over time.”

The main navigation bar has also been reorganized as a “Product Overview” screen that groups Firebase products into four main areas, based on the app development lifecycle: Develop, Stability, Analytics, and Grow. Develop, naturally, clusters tools related to coding and building out the app, such as database and authentication utilities. The Stability category holds tools that help monitor user crashes while providing a full spectrum of app performance metrics.

“As users, we always have these crashes happen in the wild, out in the real world, and not just on our office wifi,” said Ma. “So the Stability category really digs in deeper than ever before, to help you really understand app performance from every technical standpoint.”

The newly revamped Analytics dashboard will now be fully integrated with Google Analytics. One new feature is a “real-time card” enabling devs to see performance data at a glance and in the actual moment. For example: “Something we learned from Fabric team is that, for mobile apps devs, a critical moment comes when they release a new version where things change significantly from the previous version,” said Ma. “So we created a dedicated real-time view of that critical period to show how things are going as users update from old to new.” 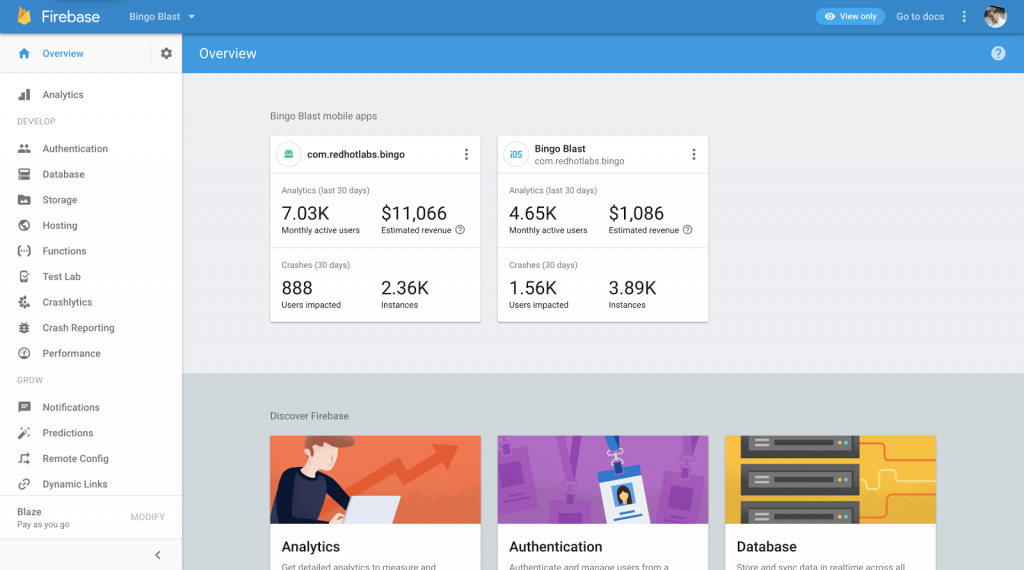 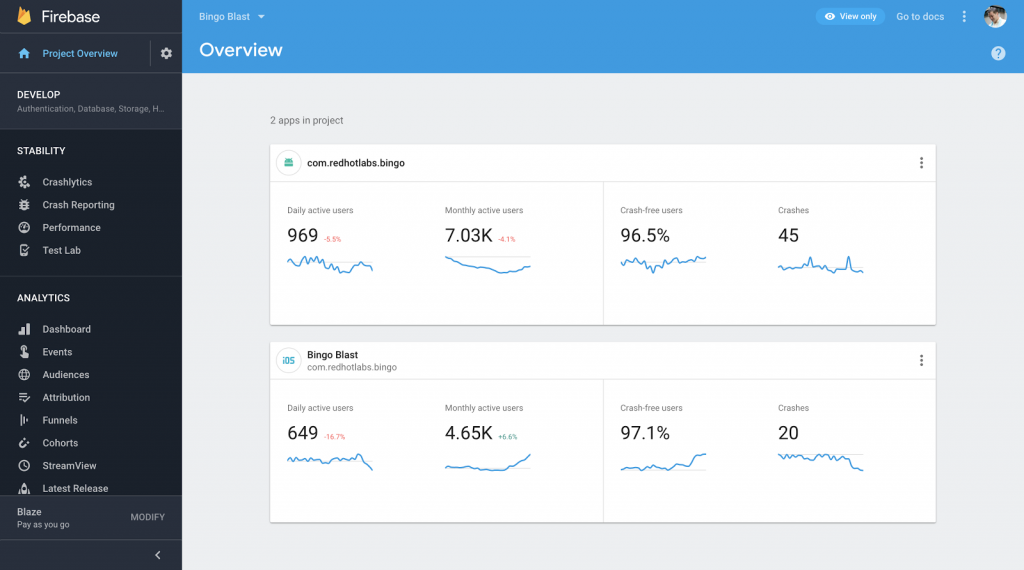 “Specify the moment you release, and Firebase can immediately tell you whether your release has impacted your base in terms of active users and whether they are experiencing crashes,” Ma added.

The final category in the new Product Overview panel is called Grow, dedicated to tools that drive better user engagement and retention and “take some of the art out of translating this while getting real results.”

For example, said Ma, it can be tricky to fine-tune a live mobile app’s user interface to ensure users remain engaged with your app, for example. Firebase Grow now offers tools like remote config to allow devs to remotely change their app in order to test different app experiences.  “Like say you make the button label a string that is part of your config,” explained Ma. “Now you can remotely push diff configs to your app — change button labels or test diff user signup flows — as a way to remotely tweak user experiences and measure the response.”

Firebase Cloud Messaging (FCM)  has been part of the platform from the beginning, allowing developers to send messages to users via the Firebase Console (or programmatically if desired). However, sending cross-platform notifications was complicated and sometimes required the repetitive creation of multiple, separate messages. The newly upgraded Firebase now offers a new RESTful, FCM HTTP v1 API that makes it safer and easier to send messages to your cross-platform applications. The new FCM API unites platform-specific fields in a single notification. For example, said Ma, “Now you can send a simple text notification to iOS, but a request with a click_action to Android — all in one API call.”

In addition to FCM, another powerful tool for driving user engagement and retention is Remote Config. Up until now, running variant tests with either Remote Config or FCM in Firebase had to be done manually. User feedback was loud and clear that mobile developers wanted a faster, easier way to test how different app variants or push notification messages impacted their app’s key business metrics.

Thus the launch of A/B testing, a new Firebase feature that’s integrated with Analytics, FCM and Remote Config. “This is built on the statistical engine and years of learning from Google Optimize — our free website testing and personalization product — and makes it easy to design and deploy experiments right from the Firebase console,” said Ma.

Setting up an A/B test is quick and simple, said Ma. You can create an experiment with Remote Config or FCM, define different variant values and population sizes to test on, then set the experiment goal. From there, Firebase will take care of the rest, automatically running the experiment then letting you know when a “statistically significant winner” arises.  A/B testing is still in beta; learn more and get started with A/B testing here.

Firebase Predictions is the platform’s biggest, and arguably most exciting, step into the future. “This is the first step of bringing Google’s AI technologies to Firebase,” said Ma. “Predictions takes Google’s machine learning and applies it to your analytics data to provide predictions of actions users are about to take in your app.” 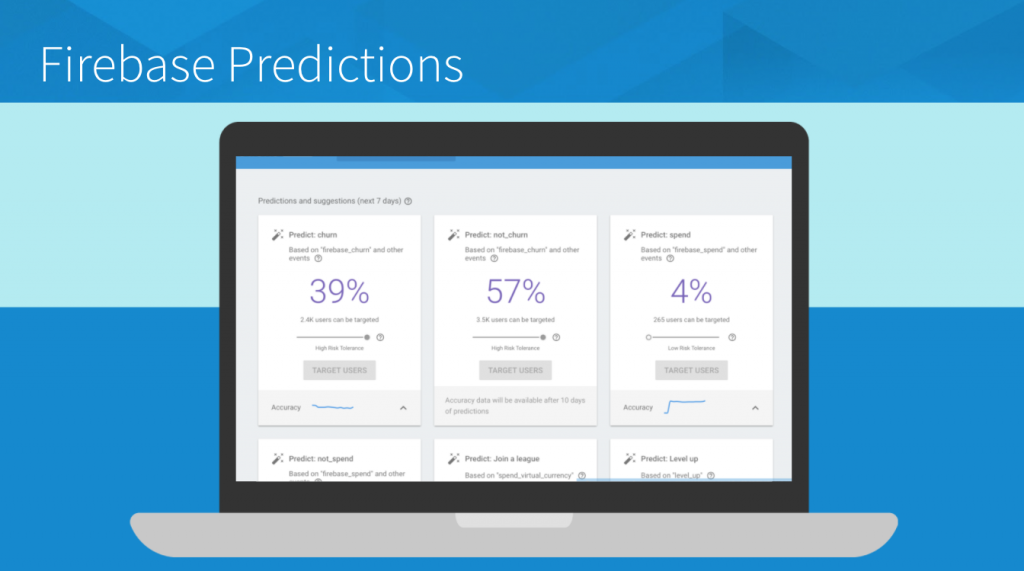 Predictions is tightly Integrated with other parts of Firebase — Analytics, cloud messaging, remote config, and the A/B testing tool — to automatically create dynamic user groups based on behavior predicted from Analytics data.

In short, Predictions allows developers to anticipate users likely to leave and take action to retain them.

In a real-world demonstration of the power of Predictions, Halfbrick — the game studio known for App Store mainstays Fruit Ninja and JetPack Joyride — ran an alpha test on the system, using Predictions and Remote Config to create a user retention campaign in their app Dan the Man. When users were about to leave their game, they would receive an in-game promotion offering more virtual goods if they stayed in. The results were dramatic: Halfbrick increased their 7-day user retention by 20 percent.

Developers interested in joining the Firebase alpha program are invited to step up, Ma said.

Google Firebase offers a three-tier pricing model. There is a free tier for prototyping and hobbyists, a fixed priced model at $25 for predictable workloads, and commodity pricing for large-scale usage.