Floppy Disks Survive — Thanks to One 73-Year-Old’s Business

In a non-descript industrial park in Lake Forest, California, Tom Persky's warehouse is a floppy disk heaven with multitudes of different-colored disks sent from around the world.
Oct 30th, 2022 6:00am by David Cassel 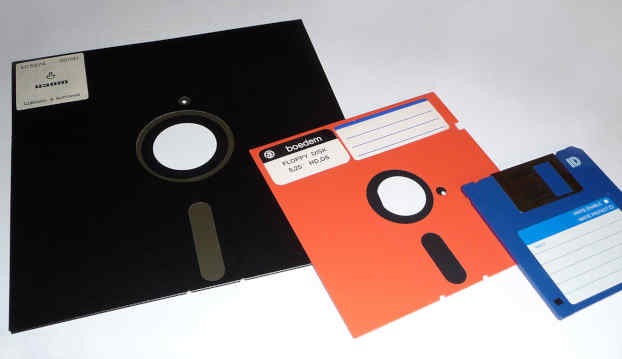 “Floppy disks” are two words triggering long-ago memories for those who remember the way things were. Floppy disks were the primary storage mechanism for how data was backed up and shared from the world’s very first home computers starting more than 40 years ago.

This month, 73-year-old Tom Persky found himself fielding interview requests about floppy disks from Reuters, NPR, and the authors of a new book — not to mention a 2017 appearance on CNN. His very existence offers an odd and inspiring chance to reflect on our current stack of technologies today, a larger ecosystem where one medium invariably gives way to another, while bringing unanticipated challenges — and some inconvenient questions.

But most surprisingly, it’s also an ecosystem where the seemingly archaic floppy-disk format still lives on in the world — thanks to the persistent efforts of just one dedicated entrepreneur, the self-described “last man standing in the floppy disk business.”

In a nondescript industrial park in Lake Forest, California, Reuters visited Persky’s one-of-a-kind warehouse, a floppy disk heaven with multitudes of different-colored disks — green, orange, blue, yellow or black disks — “sent from around the world” to be stacked neatly on his warehouse shelves.

CNN called it “where all your floppy disks went.”

“I started out as a tax lawyer, then a software developer, then a duplication company, and now selling floppy disks,” Persky tells me in an email interview Thursday.

And then he adds jokingly, “Who knew?”

Persky’s ongoing work has finally gained him a kind of cult status, judging by his interview in the upcoming book “Floppy Disk Fever: The Curious Afterlives of a Flexible Medium.” In the interview, Persky remembers how his wife had first purchased the domain floppydisk.com more than 30 years ago (“around 1990”) — but as recently as 2002, Persky’s only business was duplicating floppy disks.

“Not in a million years did I think I would ever sell blank floppy disks,” he tells the book’s authors. “Duplicating disks in the 1980s and early 1990s was as good as printing money. It was unbelievably profitable. I only started selling blank copies organically over time.” Yet while 90% of his business used to be duplicating CDs and DVDs, now 90% of his business is selling blank floppy disks.

“It’s shocking to me,” Persky says in the book.

He’s keeping the business running with the help of three employees. “The technology is interesting,” Persky told me Thursday, “and I’ve enjoyed solving the unlimited number of problems that people present…” And Persky also provides the service of retrieving files stored on floppy disks for people who no longer have a way to access them.

On a 2015 podcast, Persky pointed out that “There still are millions of floppy disks out there with first drafts of novels and dissertations and address books and all kinds of things that people want to get that data off. ” And that work has been very gratifying, Persky told the authors of the recent book. “You would not believe some of the letters we get back. People see their late grandmother or their baby pictures again and that’s very important to them…

“it is nice to know that we’re getting people stuff they really need.”

In fact, the book’s description at Amazon promises it challenges the very notion of obsolescence itself — while delivering an important message.

“By looking at the current presence of past technology we can assess our present-day situation and speculate on the future developments of our media landscape….” 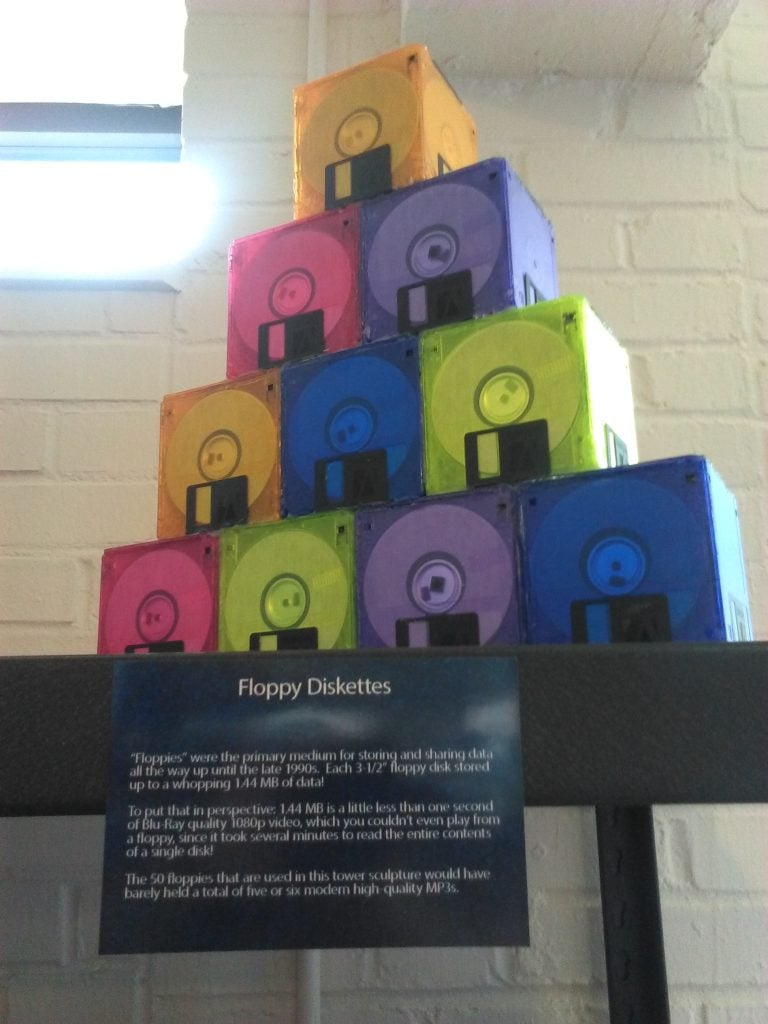 A computer repair shop in North Carolina exhibits a tower of 50 disks as a curio from the past — complete with a plaque explaining what they are. Image by David Cassel.

The upcoming book’s foreword is written by someone with their own appreciation for technologies of long ago: Lori Emerson, an associate professor at the University of Colorado at Boulder who is also the founder of a museum of obsolete technologies called the Media Archaeology Lab.

It’s “a hands-on lab full of still functioning media from the late 19th century to the present moment,” Emerson tells me in an email interview. “Some of our favorite visitors are young people who usually first ogle our computers and game consoles from the 1970s and then they’ll move on to inspecting the less obvious, less glamorous bins, boxes, trays, envelopes, and cabinets full of floppy disks of all sizes — some with handwritten labels, some imprinted with corporate logos, many completely blank. Often these young people will pick up the floppy, wave it in the air, and exclaim, ‘I had no idea they were floppy!'”

“We even give floppies away to them, watching them walk out of the lab seemingly buoyed with both longing for a world they never lived in and hope for a future world that is unlike the one they’re in right now.”

Emerson stresses that she’s not “proselytizing” for a return to some Golden Age of floppy disks — but sees them as inspiring a moment of serious and thoughtful contemplation, as “vehicles to rethink what’s pragmatically and philosophically possible. “What difference would it make to our pace and quality of life if we intentionally embraced small and slow computing? What if the constraints offered by floppy disks allowed us to rethink the amount of energy and electronics we normally consume? And what if floppy disks reminded us of a kind of surveillance-free mode of file sharing?”

Emerson says the upcoming book “offers us a range of opportunities to reimagine the present and future of computing in completely different terms than the ones being imposed on us by the computing industry.”

Living in a Time Warp

Many industries are still using floppy disks. Persky tells Reuters they’re used in the embroidery and tool and die industries, and told CNN in 2017 that most of his customers were commercial and industrial. Floppy disks were being used for everything from commercial aviation to ATM machines, and he’d also sold disks to the U.S. government. (In 2016 CNBC noted that America’s nuclear forces are coordinated by a computer system using 8-inch floppy disks.)

And yet Persky tells CNN he’s the last man standing in the business “because I basically forgot to get out of the business.” When the book’s authors ask Persky how many floppy disks he has in stock, he gives them two answers: “Something on the order of half a million” and “Not as many as I’d like.” Then he adds that “People have been living off of inventory for five or ten years now”

But in a strange miracle, people also keep sending him disks. “With all these packages coming in on a daily basis, it is Christmas here every day,” Persky tells the book’s authors. (“If it’s in a paper sleeve, maybe there’s a coffee ring stain on it? Not a good sign,” Persky joked on the 2015 podcast.)

And so he continues, anointed by fate with a status unmatched by anyone else alive. “Yes, there are probably hundreds of thousands or millions of new unused disks out there in the world,” Persky told me Thursday, “but they are scattered around the planet. No one knows where they are.”

After all these years, he’s not aware of any other comparable inventory — anywhere else in the world. If a meteor destroyed his warehouse in southern California, “This business will simply go away. Buggy whips, typewriters, 8-track cassettes… hey, life goes on… Obladi, oblada…”

“I’ll be here for as long as people continue to want to have these disks,” Persky tells Reuters — adding “But it’s not forever.”

And when I ask him how it feels to be the last man standing in the floppy disk business, he turns philosophical, and responds with a John Lennon lyric.

“Life is what happens when you’re busy making other plans.”

SHARE THIS STORY
RELATED STORIES
Software Developer Tool for Quantum Computers Launching Soon Are Monolith CI/CD Pipelines Killing Quality in Your Software? Case Study: How Dell Technologies Is Building a DevRel Team Oxeye Finds Bad Spotify Backstage JavaScript Vulnerability LaunchDarkly: Feature Management Is a Must-Have
SHARE THIS STORY
RELATED STORIES
Making It Easier to Build Apps with Time Series Data Software Developer Tool for Quantum Computers Launching Soon Discord vs. Slack: Which Is Right for Your Team? OpenTelemetry Properly Explained and Demoed How Do We Protect the Software Supply Chain?
THE NEW STACK UPDATE A newsletter digest of the week’s most important stories & analyses.
The New stack does not sell your information or share it with unaffiliated third parties. By continuing, you agree to our Terms of Use and Privacy Policy.