Flora Robotica: Let the Robots Tend to Your Gardens 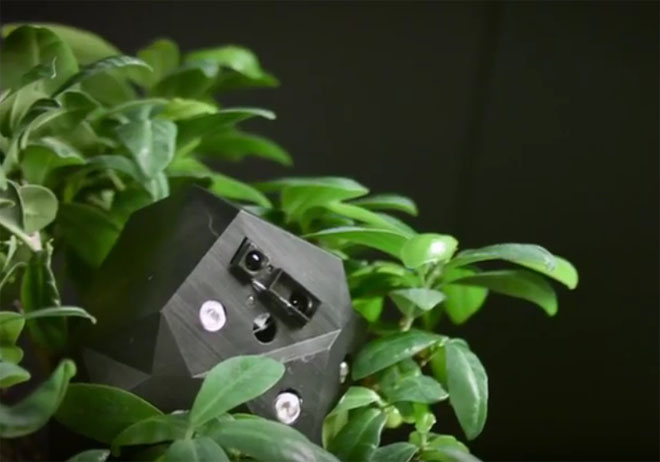 The Green Revolution of the 1960s introduced a number of technologies that helped to boost agricultural crop yields worldwide, including the use of hybridized seeds, synthetic fertilizers, and pesticides. But the next plant-growing revolution may not come from the use of these chemicals or from genetically engineered seeds. Rather, it may come from an alliance between plants and robots.

That’s the premise behind Flora Robotica, a project that’s being undertaken by a group of European researchers from Poland, Denmark, Germany, and Austria, and funded by the European Union. The project will explore from various multidisciplinary angles the possibility of symbiotic relationships between plant and machine, in order to create a “society of bio-hybrids that function in a self-organizing, distributed cognitive system capable of growth and development through interaction with humans, resulting in the creation of architectural structures.”

The team’s paper describes their goal as developing a “distributed robot garden” where the plants act as a kind of biosensor that provides feedback to their robotic components. These robot-plant hybrids would use robotic assemblies that would support and boost the natural growth cycles of plants, as well as providing a kind of “scaffolding” that would help plants regulate themselves. The natural, adaptive behavior of plants in response to things like light, gravity and water (also known as tropisms) would be harnessed, while the programmable robotic component would influence the natural growth process, further triggering artificial growth. But let’s hear it from the researchers themselves:

Truly Green Cities of the Future

The idea of distributed robot gardens could have a lot of implications: not only would it be a potential boon to those of us who want to build more living, green spaces in our homes, on a larger scale, it could mean cities with bigger and better green spaces, more automated vertical gardening and more efficient food production in urban centers.

“We are coming from research on so-called ‘mixed societies’ where robots are mixed with animals,” Heiko Hamann, a professor of computer science at the University of Paderborn, told Digital Trends. “For example, there is research showing that insects can be convinced to aggregate at a different spot influenced by mobile robots. We want to mix robots with natural plants to influence them. We want to make the plants grow into shapes and forms that we determine. This way we hope to create green walls and grow roofs or even houses.” 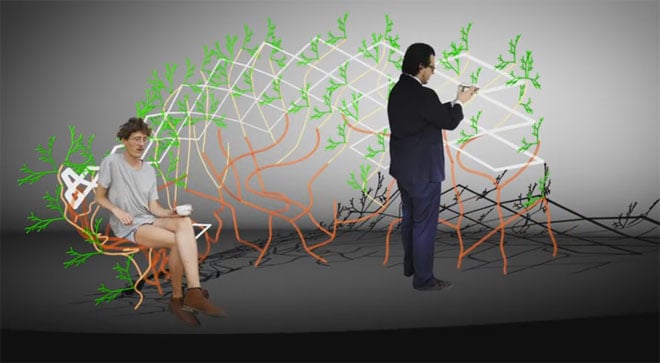 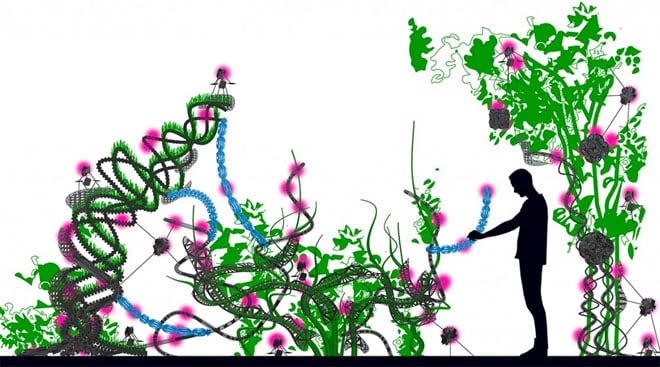 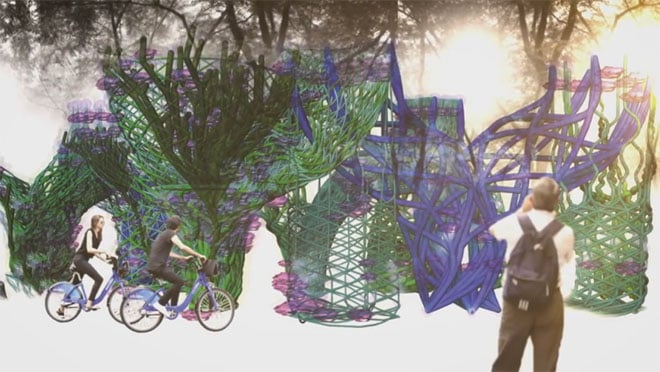 The hope is that this partnership between robots and plants could result in an architecture (or food production environment) that is highly dynamic and responsive to its context.

“In the future, we may be able to construct from a collaboration between people, robots and plants, an architecture that is self-repairing, self-growing,” said Mary Katherine Heinrich, a Ph.D. fellow at the Royal Danish Academy of Fine Arts. “It can adapt to changing needs.”

In the researchers’ preliminary experiments, a symbiotic robot-plant hybrid was created by first constructing a scaffold structure with rods and nodes, and outfitted with small, autonomous devices like sensors, actuators and an energy-harvesting system, all wirelessly connected and controlled via a small Raspberry Pi or BeagleBone Black computer, which in turn can be connected and scaled-up to a larger system. The system is designed to be modular and can be customized according to the users’ needs and goals. To power the system, solar panels, micro wind turbines or microbial fuel cells could be utilized.

The team’s other experiments included the use of Thymio robots, running a swarm intelligence routine, to create braided structures for plant growth. The researchers also ran computer simulations to investigate the use of controllers and robots in distributed, artificial structures. 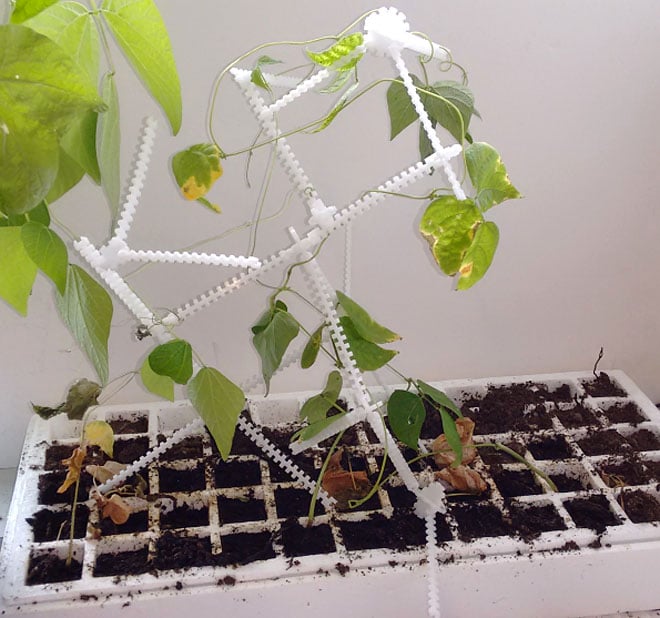 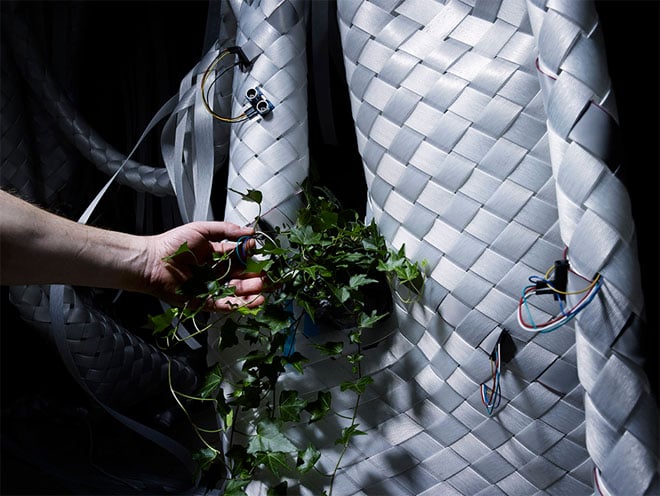 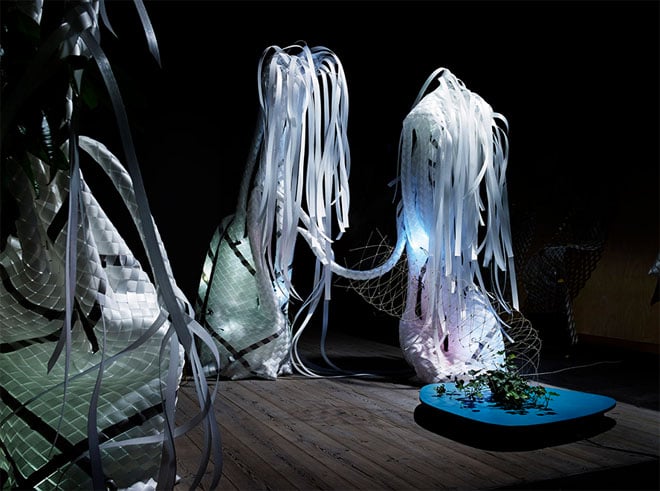 While the creation of house-sized plant-robot bio-hybrids are still some time away, the researchers envision that the Flora Robotica concept could have big impacts on how architecture is done. Rather than focusing on prefabricated materials assembled into an end product and object, architecture would focus on the growth process and systems design, and become more informed by horticultural principles instead.

These distributed robot gardens could also have a social component as humans engage with bio-hybrid systems, perhaps as collective gardeners participating in an Internet of Plant Things, or as gamers using augmented reality (AR) technologies.

Even more intriguing would be the incorporation of artificial intelligence models of development, learning and growth in neural networks, synthesized with fascinating new research into plant intelligence, which shows that plants are actually capable of learning and retaining memories. Put all of that together, and we may someday have entire farms, cities and buildings that have been grown, not built, and perfectly adapted to their environment, rather than at odds with it.