The CNCF Tech Radar Initiative  seeks to help in the selection process of cloud native technologies by offering curated recommendations about which technologies may be more ready to use than others. Every quarter, the group will post a set of recommendations covering a certain group of technologies, along with patterns of successful usage.
Jul 1st, 2020 1:00pm by Joab Jackson 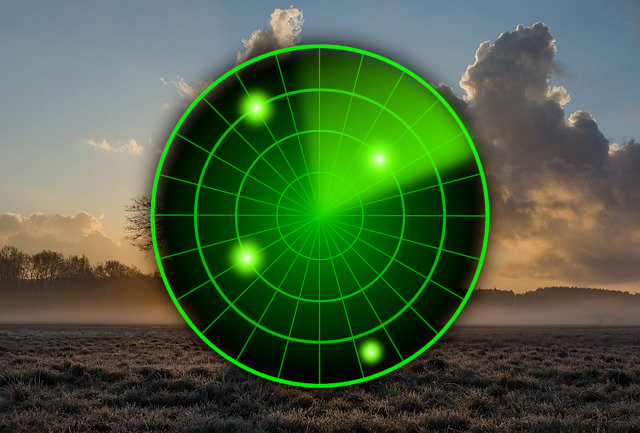 The Helm package manager and the Flux GitOps operator are the two most highly-recommended technologies for supporting cloud native continuous delivery operations, as identified by the Cloud Native Computing Foundation’s End User Community.

The evaluations came about as part of the new CNCF Tech Radar, a new initiative to share information across practitioners about what cloud native tools they are using, and what best practices — or patterns — they’ve developed for these software stacks, said Cheryl Hung, CNCF director of ecosystem, in a webinar introducing the project. Representatives from about 140 organizations participate in this group, which meets every two weeks in a private chat to discuss their experiences.

“The goal is to look broadly across a range of companies,” rather than from a single perspective of what technologies to use and how to deploy them, Hung said.

The CNCF has long offered the Cloud Native Interactive Roadmap, to help architects understand the tools needed for cloud native computing. It is CNCF’s comprehensive list of all the technologies — not just those hosted by the CNCF — that can be used for cloud native deployments. The list itself is quite voluminous — listing 1,395 entries at last count. While comprehensive, the interactive map leaves a lot of questions: How can a CTO pick and evaluate the right tools for the job? This project plans to highlight those technologies that an organization may want to take a look at first.

This is where the Tech Radar can help.

The format for this report was adopted by ThoughtWorks consultancy, which has been using it to evaluate technologies for over a decade. For each technology category, technologies are evaluated and placed into one of four buckets:

The group plans to evaluate 10-20 cloud native technologies in a predefined use case once every quarter. Each participating company was given a list of technologies (plus the chance to add their own), and asked to evaluate the technologies under the four options listed above.

For the initial round, the group looked at continuous delivery (CD) tools, a current hotbed of development. A total of 33 companies weighed in. 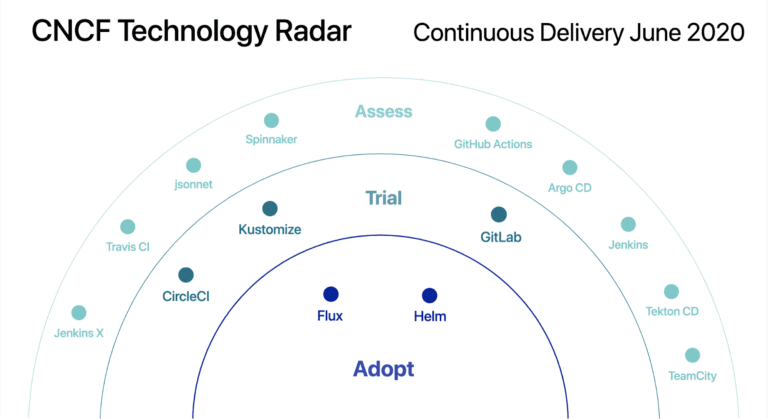 Here, both Flux and Helm are in the “Adopt” category, as their usefulness and stability have long been proven. “Flux and Helm both had plenty of companies that said they would adopt, and several who said they would hold, but on the whole [they] had positive consensus,” Hung said. While Helm is not a CD technology specifically, it is widely used in many CD scenarios, Hung noted.

In the “Trial” category of the CD use case fall CircleCI, Kustomize, and GitLab, each of which has shown promise but may lack certain features or may not yet have enough champions. Technologies can fall into the “Assess” category for multiple reasons: CloudBees’ Jenkins, for instance, is still very widely used, though not many users were recommending it for new installations, pointing at more cloud native-ready technologies instead, such as the GitOps-ready Flux. Alternatively, Spinnaker, also in the “Assess” category, has wide awareness in the community, but not enough users to recommend it yet.

As editor of this first iteration, Hung admits that the ranking can never be totally objective. She had to make judgment calls for the technologies that fell in-between the categories. Also, this list is a snapshot of a point-in-time and will change often, given the dynamic nature of cloud computing development.  “It’s not the CNCF saying you should do this. If a project is not recommended here, it doesn’t mean there was no value to it, it just means that from this particular cohort, these were the results that that data reflects,” she said.

In the accompanying video, Hung also reflected on some of what she observed compiling the results, which provided a glimpse into how organizations are thinking about CD. She noticed that many organizations had tested up to 10 technologies, though settled on 2-4 for actual use. Also, many companies started with home-built systems, though none used the commercial cloud services that are in the CNCF Landscape.

The CNCF also provided a number of case studies to complement the report, including that of healthcare provider Babylon as well as financial services giant Intuit.

CircleCI, CloudBees, the Cloud Native Computing Foundation and GitLab are sponsors of The New Stack.

Joab Jackson is Editor-in-Chief for The New Stack, assuring that the TNS website gets a fresh batch of cloud native news, tutorials and perspectives each day. He has logged over 25 years in infrastructure IT journalism, including stints at IDG,...
Read more from Joab Jackson
SHARE THIS STORY
RELATED STORIES
How Yarn Workspaces Accelerated LinkedIn Code Delivery Building a To-Do App using GitHub Actions, Playwright, Next.js GitHub Actions Were Vulnerable to Rust Artifact Poisoning An Inside Look at What GitLab’s Web IDE Offers Developers Kubernetes CI/CD Pipelines Explained
TNS owner Insight Partners is an investor in: The New Stack.
SHARE THIS STORY
RELATED STORIES
Enriching Dev Experience with Speedy Continuous Integration A Look at Kubernetes Deployment CircleCI to Customers: Change All Secrets and API Tokens NOW! How Yarn Workspaces Accelerated LinkedIn Code Delivery Engineering Best Practices of CI Pipelines
THE NEW STACK UPDATE A newsletter digest of the week’s most important stories & analyses.
The New stack does not sell your information or share it with unaffiliated third parties. By continuing, you agree to our Terms of Use and Privacy Policy.