From a Computer in Space: The Night Region of Pluto, Illuminated by the Moon of Charon 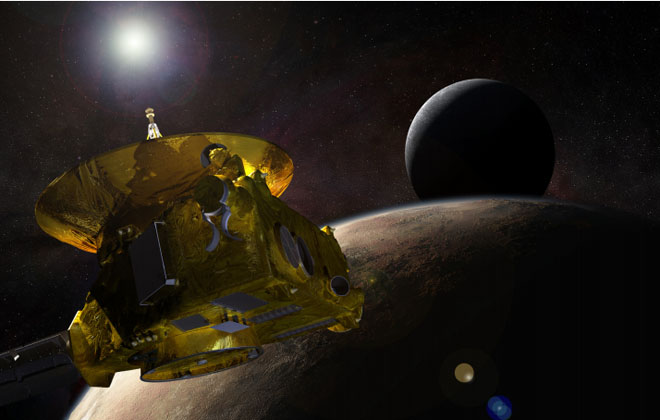 On Tuesday, NASA’s New Horizons will get the first pictures of the night region of Pluto. Here’s their wonderful description of what’s to come:

It’s Antarctic winter on Pluto. The sun has not been visible for twenty years in this frigid south polar region; it will not shine again for another 80 years. The only source of natural light is starlight and moonlight from Pluto’s largest moon, Charon.

Our fascination with space does have some corollary to these new stack worlds technologists are finding, as they further develop software that can process the data from outer space. The New Horizons is testament to that journey, but in another dimension. It’s a computer flying through space, backing up data, making room for the new data it collects and keeping scientists on edge when it has to go into safe mode like it did earlier this month.

The images sent back from New Horizons culminate a nearly decade-long wait and a three-billion-mile long journey. In the past week the probe has edged in closer — at around five million miles — revealing some never-before-seen features of the mysterious dwarf planet, showing a variety of dark and bright areas which NASA scientists are dubbing “the whale,” “the donut,” and more endearingly, “the heart.” 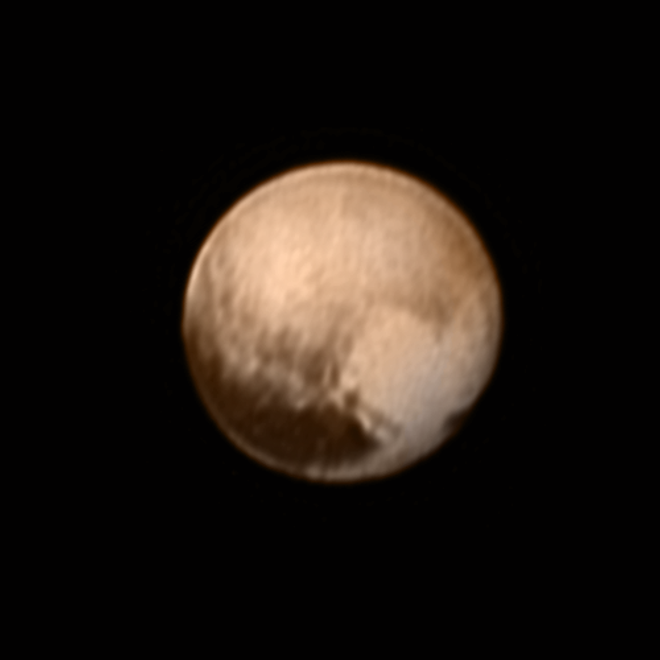 Pluto’s bright “heart”-shaped region is seen in this image taken by the probe’s cameras.

Launched back in 2006, the New Horizons spacecraft is outfitted with a variety of top-notch imaging equipment, including a Long Range Reconnaissance Imager (LORRI) and a sophisticated little camera nicknamed “Ralph” that gathers data from various parts of the light spectrum to generate color images of Pluto’s icy surface. Prior to approaching Pluto, the probe also sent back data of Pluto’s largest of five moons, Charon, revealing what the mission team are calling a “dark pole” — an enigmatic dark region forming a kind of “anti-polar” cap. 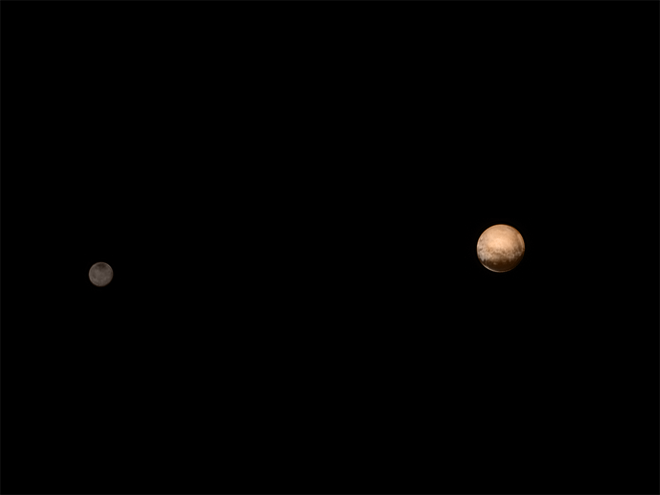 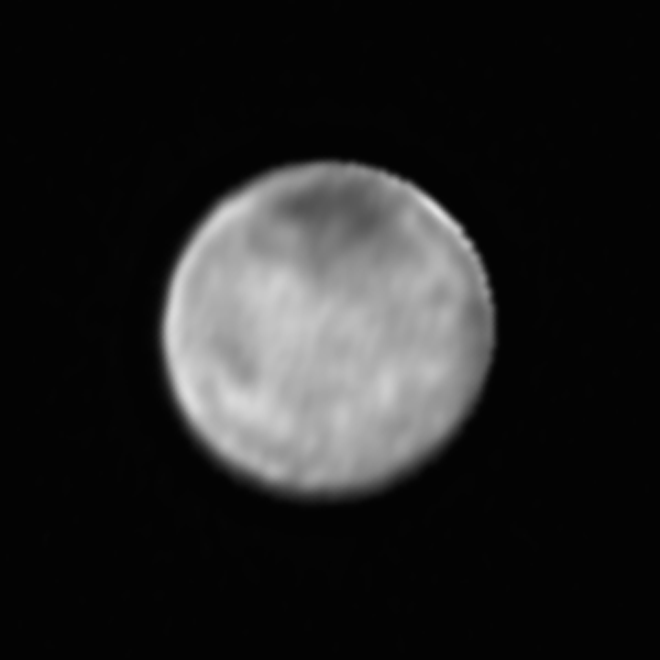 Image of Pluto and Charon; below: close-up of Charon taken by LORRI.

But the images of Pluto, beamed back early on July 8, are only preliminary insights, explains John Spencer of the Southwest Research Institute in Boulder, who is also the deputy leader of the Geology, Geophysics and Imaging team:

We’re at the ‘man in the Moon’ stage of viewing Pluto. It’s easy to imagine you’re seeing familiar shapes in this bizarre collection of light and dark features. However, it’s too early to know what [they] really are. 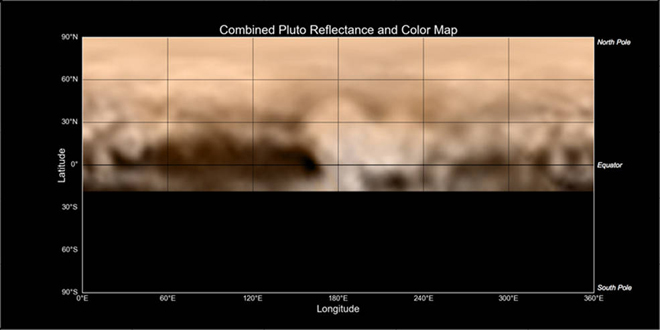 The dark region informally known as the “whale” to the left of this map of Pluto’s surface.

Scientists are guessing that the luminous, heart-shaped area of 1,200 miles across, consists of fresh deposits of frozen methane, nitrogen and possibly carbon monoxide, while to the right of the the “whale” — a dark region measuring 1,860 miles wide — is a bright, “donut”-shaped area of 200 miles in size that could be a crater or some other kind of geological feature like a volcano. The true nature of these features is not totally clear yet, but researchers are hoping to get a more detailed analysis next week when the probe does a flyby scheduled for July 14, where it will pass by the planet again to observe sunlight passing through its atmosphere.

If you stood on the night region of Pluto at that moment of closest approach by New Horizons — looking up at a distinctly gray Charon — it would appear seven times larger in the sky than Earth’s moon. Charon, although three billion miles from the sun, is so close to Pluto and so ice-covered that it would be only five times dimmer than the full moon seen from Earth. At your feet, the icy surface — resembling a sooty snow bank — would be bathed in Charon’s faint glow. The area around you would be dim, but not so dark that you would bump into things.

What the team has found so far is exciting, and they are enthusiastically anticipating what they might discover next week. As science team co-investigator and imaging lead Jeff Moore, of NASA Ames Research Center, explains, “The unambiguous detection of bright and dark terrain units on both Pluto and Charon indicates a wide range of diverse landscapes across the pair. For example, the bright fringe we see on Pluto may represent frost deposited from an evaporating polar cap, which is now in summer sun. The next time we see this part of Pluto at closest approach, a portion of this region will be imaged at about 500 times better resolution than we see today. It will be incredible!”

More updates here soon and over at NASA’s New Horizons.