From Big to Fast: Presto Continues to Shine for Cloud Data Lake Analytics 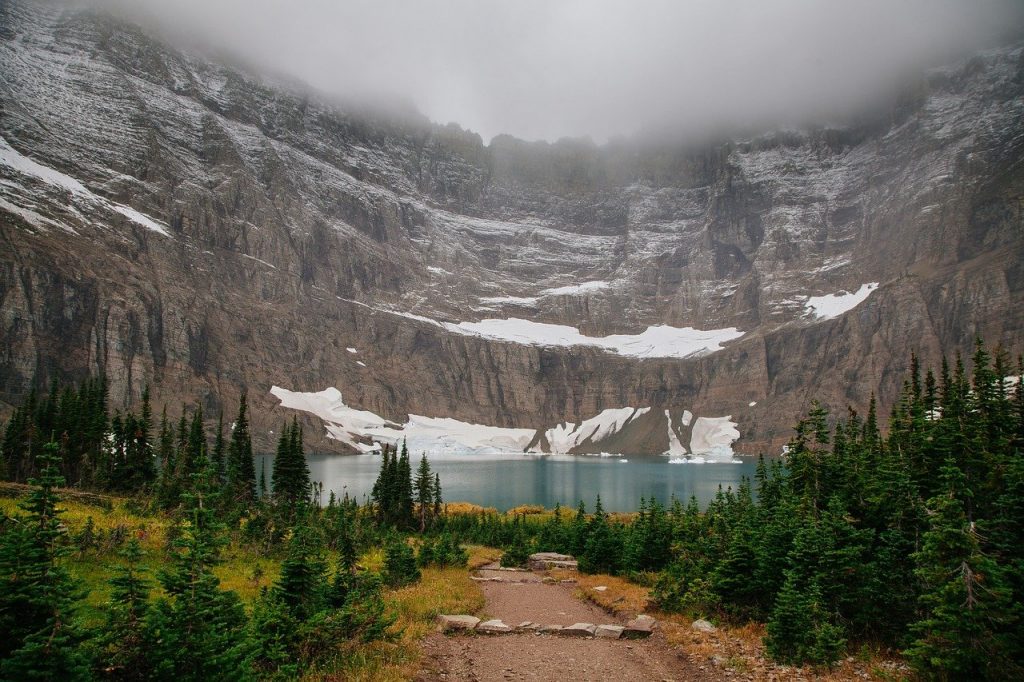 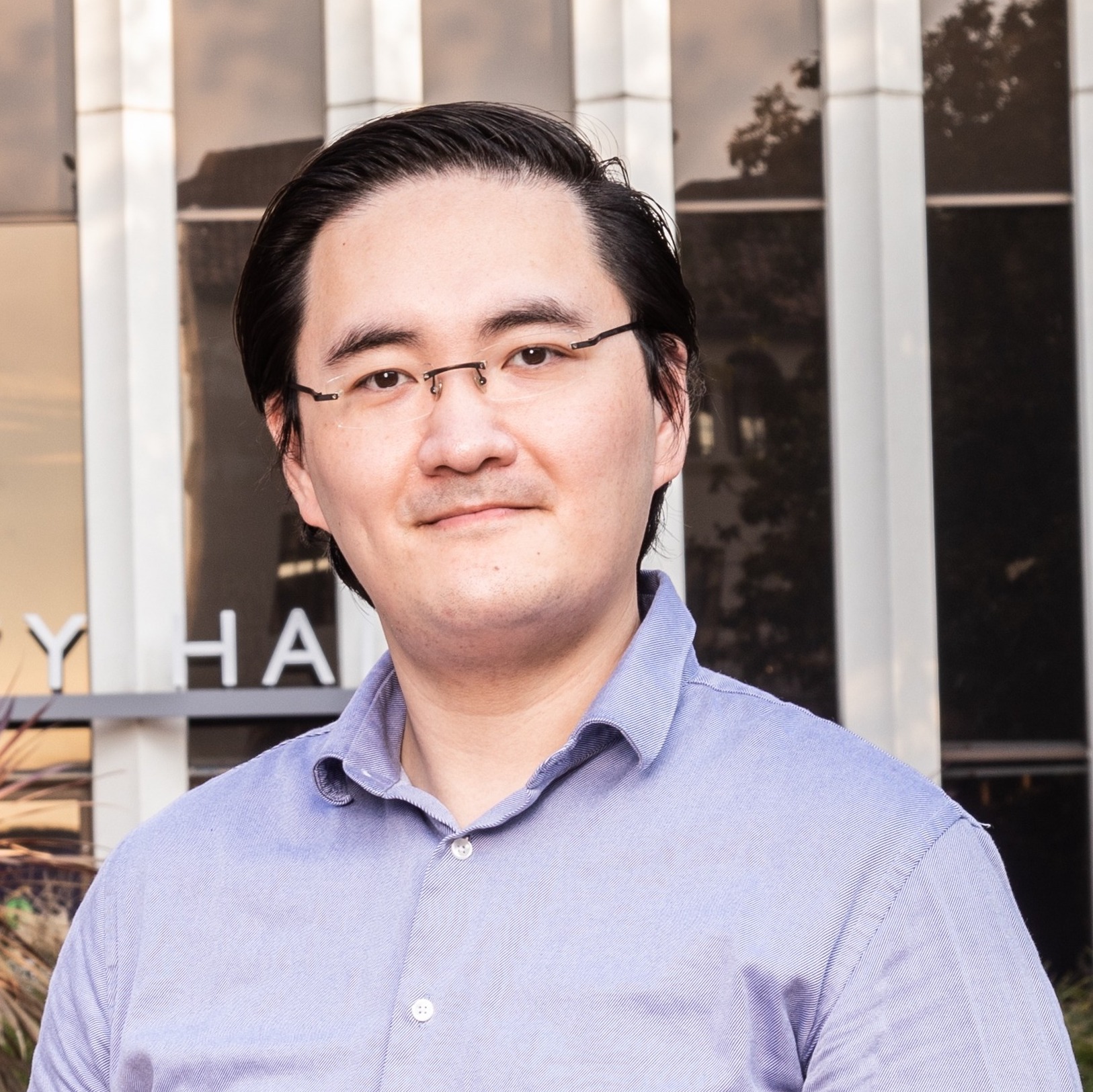 George Wang
With more than 13 years experience as a core database engineer, George Wang joins Ahana as co-founder and principal engineer. Most recently, as a senior software engineer, George built numerous key features and innovations to support a high throughput and low-latency compute engine for AnalyticDB, a Presto-based cloud service at Alibaba. He was a member of the Presto Foundation Outreach Committee while at Alibaba. Prior to that, George was a staff software engineer at IBM for over 10 years where he developed multiple features and enhancements on DB2 for z/OS.

Over the last three decades, various technologies have been developed and applied for big data analytics on structured and unstructured business data. Because today most companies store data on different platforms in multiple locations with various data formats, these large and diverse data sets often stymie the ability to capture real-time opportunity and extract actionable data insights. Enterprise organization data from those multiple systems traditionally went through an Extract, Transform and Load (ETL) process to transform the data from its operational state into a state that’s better for querying, and then the data was often moved into the enterprise data warehouse.

The ETL process created a big problem for users like data engineers, data scientists, and system administrators as the ETL jobs for data pipelining and data movement can be very time consuming and difficult to manage when working with multiple databases and datastores. Hence, demand of analytics-as-a-service has been emerging as a new model to meet the business requirements for both archived and real-time data.

A federated data computing framework that allows users to retrieve and analyze data from multiple data sources and compute in a centralized platform is a better solution for fast data analytics in today’s data environments.

Presto, an open source platform, was originally designed to replace Hive, a batch approach to SQL on Hadoop and was built with higher performance and more interactivity compared with Apache Hive. The concept of Presto was to support a MPP (Massive Parallel Processing) framework to compute large scale data, so the architectural model is designed to support disaggregation of compute and storage and process real-time and high performing data analytics. Presto is not supposed to store data, instead the data sources are accessed via various connectors.

After years of development, the latest version of PrestoDB supports SQL-on-Anything and is an interactive query framework that can fit in any enterprise architecture as an in-memory query engine.

How Does Presto Work?

Presto is based upon a standard MPP database architecture, which enables horizontal scalability and the ability to process large amounts of data. Presto’s in-memory capabilities allow for interactive querying across various platforms of data sources. In order to access data at different locations, Presto is designed to be extensible with a pluggable architecture. Many components can be added to Presto to extend it further using this architecture, including connectors and security integrations.

The Presto Coordinator is a single node deployed to manage the cluster. The coordinator allows users to submit queries via Presto CLI, applications using JDBC or ODBC drivers, or other available client API libraries of connections. The Coordinator is also responsible to talk to Workers to get update status, assign tasks, and send the output result sets back to the users. All communication is done through the RESTful API by Coordinator’s StatementResource class.

The logical implementation of Presto is shown below. There are seven basic steps for running a query: 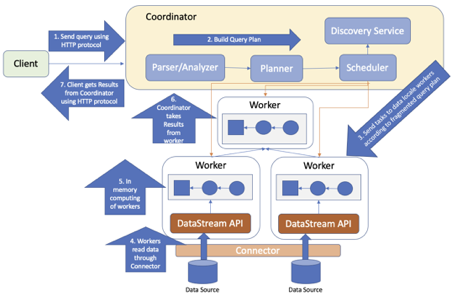 Presto doesn’t use MapReduce. It computes through a custom query and execution engine. All of its query processing is in memory, which is one of the main reasons for its high performance.

Presto is a distributed SQL engine for data analysis on data warehouses and other disparate data sources. It can achieve excellent performance for real-time or quasi-real-time analytic computing. Queries run with response times from millisecond to seconds. For a complex query with the right configuration, runtime can finish within the unit of minutes vs. hours or days if running on the Hive system. With its federated architecture, Presto is a proven technology that is most suitable for the following application scenarios:

First of all, Presto adopts a full memory computing model with excellent performance, which is especially suitable for ad hoc query, data exploration, BI reporting and dashboarding, lightweight ETL and other business scenarios.

Secondly, unlike other engines that only support partial SQL semantics, Presto supports complete SQL semantics, so you don’t have to worry about any requirements that Presto can’t express. Furthermore, Presto has a very convenient plug-in mechanism, you can add your own plug-ins without changing the kernel. In theory, you can use Presto to connect any data source to meet your various business scenarios.

Finally, Presto has a very active community. As part of the Linux Foundation’s Presto Foundation, many large enterprise companies in addition to Facebook such as Twitter, Uber, Amazon Athena, and Alibaba embrace Presto’s data lake analytic capability to develop features using Presto’s codebase to support large scale, high volume OLAP transactions on top of their own data federation system. Based on the above advantages, Presto is a proven technology to provide cloud data lake analysis as the underlying analytics engine.

The priority design of data lake, through opening the underlying file storage, brings maximum flexibility to the data into the lake. The data entering the data lake can be structured, semi-structured, or even completely unstructured raw logs. In addition, open storage also brings more flexibility to the upper-level engines. Various engines can read and write the data stored in the data lake according to their own scenarios, and only need to follow the relatively loose compatibility conventions (such loose conventions will have hidden challenges, which will be mentioned later). But at the same time, file system direct access makes many higher-level functions difficult to implement. For example, fine-grained (less than file granularity) permission management, unified file management and read-write interface upgrade are also very difficult (each access file engine needs to be upgraded before the upgrade is completed). 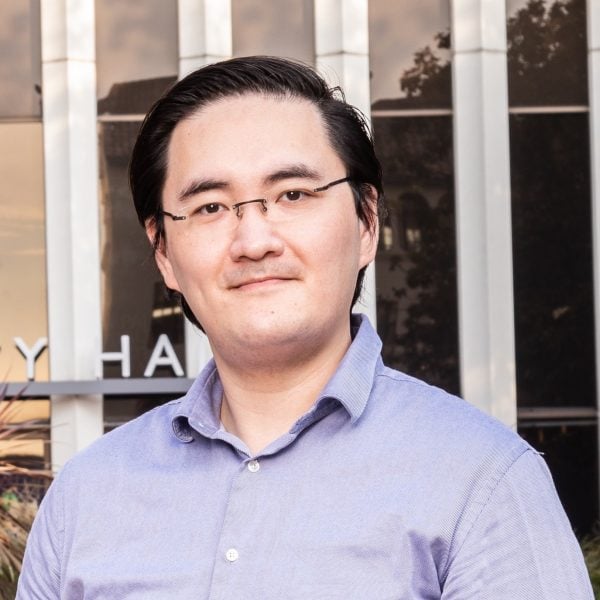 With more than 13 years experience as a core database engineer, George Wang joins Ahana as co-founder and principal engineer. Most recently, as a senior software engineer, George built numerous key features and innovations to support a high throughput and...
Read more from George Wang
SHARE THIS STORY
RELATED STORIES
Why Web3 Needs a Real-Time Data Layer Now More Than Ever Get Started with Text Classification Boost Customer Engagement with Real-Time Data Presto: Data Analytics on an Open All-SQL Platform One Technology That Makes Renewable Energy More Efficient
TNS owner Insight Partners is an investor in: The New Stack.
SHARE THIS STORY
RELATED STORIES
MongoDB Partners with Databricks for App-Driven Analytics NASA and IBM to Speed AI Creation with New Foundation Models Why So Many Organizations' Artificial Intelligence Initiatives Fail One Technology That Makes Renewable Energy More Efficient Hybrid Data Collection from the IoT Edge with MQTT and Kafka
THE NEW STACK UPDATE A newsletter digest of the week’s most important stories & analyses.
The New stack does not sell your information or share it with unaffiliated third parties. By continuing, you agree to our Terms of Use and Privacy Policy.