From DB2 to Real-Time with Aerospike Founder Srini Srinivasan

Founder Srini Srinivasan shares his startup journey and how he uses the principles of honesty in Aerospike's software development.
Sep 8th, 2022 11:50am by Alex Williams 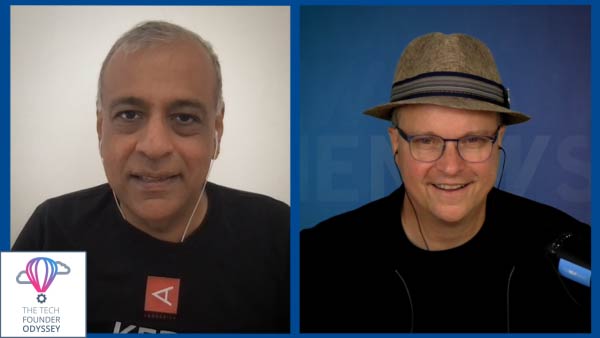 Aerospike Founder Srini Srinivasan had just finished his Ph.D. at the University of Wisconsin when he joined IBM and worked under Don Haderle, the creator of DB2, the first commercial relational database management system.

From DB2 to Real-Time with Aerospike Founder Srini Srinivasan

Haderle became a major influencer on Srinivasan when he started Aerospike, a real-time data platform. To this day, Haderle is an advisor to Aerospike.

“He was the first one I went back to for advice as to how to succeed,” Srinivasan said in the most recent episode of The New Stack Maker series, “The Tech Founder Odyssey.”

A young, ambitious engineer, Srinivasan left IBM to join a startup. Impatient with the pace he considered slow, Srinivasan met with Haderle, who told him to go, challenge himself, and try new things that might be uncomfortable.

Today, Srinivasan seeks a balance between research and product development, similar to the approach at IBM that he learned — the balance between what is very hard and what’s impossible.

Technical startup founders find themselves with complex technical problems all the time. Srinivasan talked about inspiration to solve those problems, but what does inspiration mean at all?

Inspiration is a complex topic to parse. It can be thought of as almost trivial or superficial to discuss. Srinivasan said inspiration becomes relevant when it is part of the work and how one honestly faces that work. Inspiration is honesty.

“Because once one is honest, you’re able to get the trust of the people you’re working with,” Srinivasan said. “So honesty leads to trust. Once you have trust, I think there can be a collaboration because now people don’t have to worry about watching their back. You can make mistakes, and then you know that it’s a trusted group of people. And they will, you know, watch your back. And then, with a team like that, you can now set goals that seem impossible. But with the combination of honesty and trust and collaboration, you can lead the team to essentially solve those hard problems. And in some cases, you have to be honest enough to realize that you don’t have all the skills required to solve the problem, and you should be willing to go out and get somebody new to help you with that.”

Srinivasan uses the principles of honesty in Aerospike’s software development. How does that manifest in the work Aerospike does? It leads to all kinds of insights about Unix, Linux, systems technologies, and everything built on top of the infrastructure. And that’s the work Srinivasan enjoys so much — building foundational technology that may take years to build but over time, establishes the work that’s important, scalable, and has great performance.

Alex Williams is founder and editor in chief of The New Stack. He's a longtime technology journalist who did stints at TechCrunch, SiliconAngle and what is now known as ReadWrite. Alex has been a journalist since the late 1980s, starting...
Read more from Alex Williams
SHARE THIS STORY
RELATED STORIES
How to Get Started Filling 3.4 Million Cybersecurity Jobs GPTZero: An App to Detect AI Authorship Why Trust and Autonomy Matter for Cloud Optimization Entrepreneurship for Engineers: Avoiding Feature Bloat How New Sony AI Chip Turns Video into Real-Time Retail Data
Aerospike is a sponsor of The New Stack.
TNS owner Insight Partners is an investor in: The New Stack, Real.
SHARE THIS STORY
RELATED STORIES
Netlify Acquires Gatsby, Its Struggling Jamstack Competitor State of the API: Monetizing API Deployment Is on the Rise Azure Went Dark 5 Security Principles to Guide Your DevSecOps Journey Improve the Quality of Your APIs with Spectral Linting
THE NEW STACK UPDATE A newsletter digest of the week’s most important stories & analyses.
The New stack does not sell your information or share it with unaffiliated third parties. By continuing, you agree to our Terms of Use and Privacy Policy.