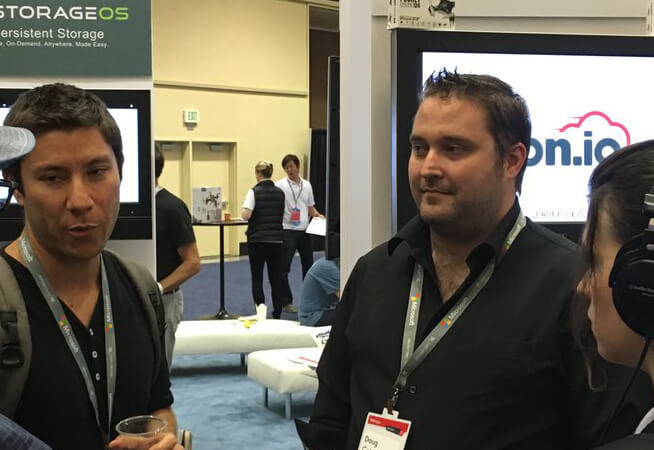 In this episode of The New Stack Makers podcast, we explore how serverless software provider Iron.io helps organizations rebuild their monolithic applications as sets as microservices, as well as how the company helped the popular social drinking application Untappd to enter the serverless ecosystem. The New Stack founder Alex Williams spoke with Iron.io co-founder & CEO  Chad Arimura and Iron.io sales engineer Doug Colburn on the show floor at DockerCon 2016 for a brief discussion about these issues.

Having recently announced a strategic partnership with Mesosphere, Iron.io hopes to usher in the new era of serverless computing, which relieves the end-user from maintaining servers by offering a platform to execute blocks of code. When the company began in 2011, it was LXC containers that were handling job and batch processing, Arimura noted.

Though this soon changed, “When Docker came around it was the perfect fit, because it standardizes the way to contain and ship code,” Arimura noted. Containerizing their workflow allowed the developers at Iron.io to split up single VMs so that they could have multiple users running their applications at scale without impacting one another.

“By abstracting infrastructure from developers, it makes it simpler for them to just work. Whether that’s creating tasks or a payload. From the microservices side of things, it allows them to create a container that does one task and does it well. It’s moving from monolith to microservices, and this abstraction has now gone even further. Developers can focus on, ‘here’s my bit of code, it does this in its own release cycle, and now I don’t have to worry about the infrastructure.”

Arimura later offered a final takeaway: “The new stack is forming. That’s what’s great about this thriving ecosystem, is a team of developers can choose a set of technology to get them to this serverless world”

Iron.io and Mesosphere is a sponsor of The New Stack.

SHARE THIS STORY
RELATED STORIES
What Is a Microservice Catalog and Why Do You Need One? The Benefits of Using Microservices for Edge Devices Why Enterprises Need a Management Plane Vanguard’s Iterative Enterprise SRE Transformation Why Distributed Testing Is the Best Way to Test Microservices
TNS owner Insight Partners is an investor in: The New Stack, Docker.
SHARE THIS STORY
RELATED STORIES
James Webb Space Telescope and 344 Single Points of Failure Limiting the Deployment Blast Radius Event Streaming and Event Sourcing: The Key Differences The Kubernetes Manifest Life Cycle Too Often Overlooked Vanguard’s Iterative Enterprise SRE Transformation
THE NEW STACK UPDATE A newsletter digest of the week’s most important stories & analyses.
The New stack does not sell your information or share it with unaffiliated third parties. By continuing, you agree to our Terms of Use and Privacy Policy.