Matt Butcher and Matt Farina discuss how updates to Helm help improve the overall Kubernetes experience and balance usability in such a large community.
Sep 10th, 2020 5:00pm by Alex Williams and B. Cameron Gain 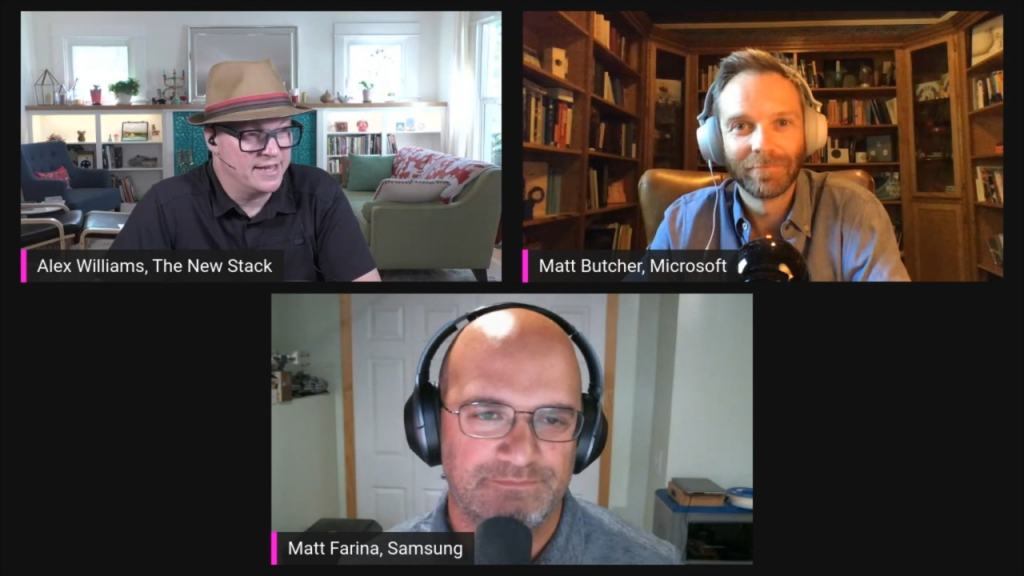 Michelle Noorali, a senior software engineer for Microsoft, wrote a statement on a whiteboard during Helm‘s first days when she worked with Matt Butcher at Deis, which Microsoft acquired in 2017. “From zero to dopamine in five minutes” is still the phrase Butcher, a principal software development engineer for Microsoft, and his team use to measure how they are building a developer experience for the popular package manager used to get Kubernetes up and going.

In this edition of The New Stack Makers podcast, Butcher and Matt Farina, a senior staff engineer for Samsung, discuss how updates to Helm help improve the overall Kubernetes experience and balance usability in such a large community to provide the best developer experience. Alex Williams, founder and publisher of The New Stack, hosted this episode.

In many ways, the philosophy behind Helm’s development has not changed much since it was created. In fact, Butcher believes Norrali’s “from zero to dopamine in five minutes” statement has continued to serve as the guiding principle.

“Early on in the project, we prioritized three kinds of classes of users and realized where we’re going to have to make choices that impacted who we serve the best. The ‘zero-to-first install story’ has been our most important story since day one,” Butcher explained. “And then from there, ‘day-to-day package management’ is the solid second-place story.”

However, Helm may not always be able to accommodate what Butcher describes as emerging “cutting edge” use cases that are “enabling new patterns of usage.”

“We realized that if we chased those third categories of things, then it was largely going to have a negative impact on the first two,” said Butcher “So, we’ve really tried to say what we want.”

The stories Butcher said his team “loves to hear” happen when an organization is just beginning to adopt Kubernetes.

“In these cases, a user we’d love to hear, ‘I just started with this Kubernetes thing and I installed WordPress for the first time and got it running and now I can look at what I installed and learn how Kubernetes works from there,’” said Butcher. “We love to hear that story, which just makes us happy every time. We can also tell from the usage patterns we see from the interactions with the community, from the two million downloads a month, that we’re really capturing that second story, which is good, because that’s where Kubernetes really is right now.”

In this way, the second Helm usage story for its day-to-day operations that covers 80% of the use cases. This involves how Helm provides the core set of tools that operators need in order to manage a cluster. “So we’re very happy to know that we’ve really captured most of that group,” said Butcher.

Some of the challenges users face today when adopting Helm involve how the platform’s usage model and available options have increased in complexity.

“Now, there is so much that it’s complicated to learn it all. And I think, in the early days, Helm helped people solve things one way,” said Farina. “Now, Helm allows people to create charts and improve on those and add many of those things in, where somebody who goes to install that chart and use it in a cluster doesn’t have to know about all those things and can still get the benefits.”

The Cloud Native Computing Foundation has also served to provide a solid and secure framework for Helm’s adoption and evolution. At the same same time, Helm — and the Flux GitOps operator — are the most recommended CD tools for cloud native operations by the CNCF’s End User Community. The CNCF has, thus, played a role in the success of the project.

“My hat’s off to the CNCF, especially the staff who does the everyday work with projects. So if you’re consuming a project, especially if you’re an enterprise, you want to know something is stable, it’s solid and that you can trust it,” said Farina. “So the CNCF has worked to try to put requirements in place and make sure projects go through the requirements so you know where they’re at — and then you can relate it to your level of trust.”