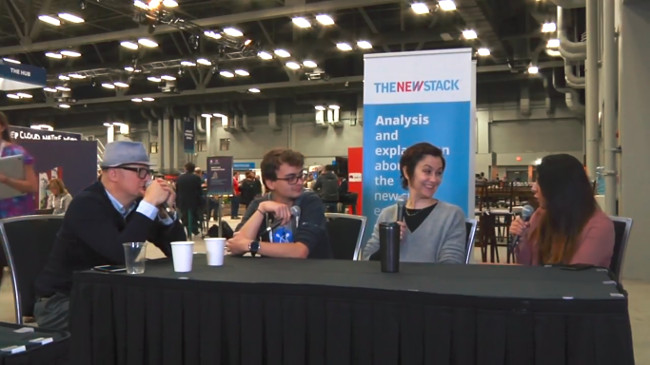 Kubernetes has had two new releases in the past six months. How do companies keep pace? And what is the role of developer advocates, maintainers and lead developers in serving customers in this open source community?

These questions and others were addressed in the episode of The New Stack Makers podcast, which was streamed live from the 2017 KubeCon and CloudNativeCon earlier this month. Ihor Dvoretskyi, a developer advocate at the Cloud Native Computing Foundation; Sarah Novotny, head of open source strategy for the Google Cloud Platform; and Michelle Noorali, senior engineer at Microsoft and co-lead for KubeCon, all joined TNS founder Alex Williams to discuss what it takes to get a project to the coveted status of a CNCF project, what the newly elected CNCF governance board is working on and what the future might hold.

“We would like long-term, committed contributors,” Novotny said. “We are working on building a mentoring program. So we’re looking at growing the people that are coming to Kubernetes, but we’re not necessarily optimizing for people just coming in and trying things out.”

The CNCF governance committee, elected in August, is already moving from implicit to explicit governance, said Novotny. For example, the CNCF does not require core values at the start of a project. But, Dvoretskyi said, “the primary reason for the project to be successful is core values.”

The committee is working on codifying a set of core values (already in draft form), along with a baseline for concepts like rebasing, new contributor mentoring and project documentation. And it’s all happening at lightning speed.

1:51: The mechanics of zero-point [v0.4, v0.5, etc] version releases
8:49: How CNCF and other foundations help with open source projects
13:44: Committing code and rebasing when vendors are participating in the community
20:42: Quality over numbers within the Kubernetes community
26:02: Continual improvement within the Kubernetes community
27:09: Adhering to organizational core values within a community in order to move ahead


The Cloud Native Computing Foundation sponsored this podcast. Google and Microsoft are sponsors of The New Stack.