What the Future Holds for the Internet of Things 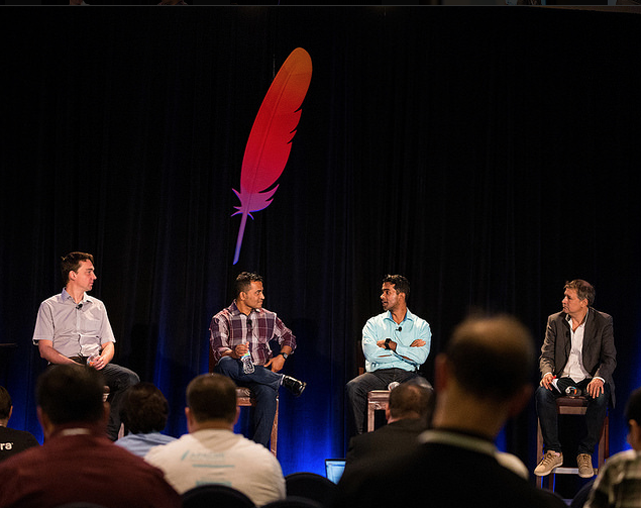 A number of trends are converging to fuel the rise of the Internet of Things, but there’s much more work to be done, a panel on the future of IOT made clear recently at the ApacheCon conference in Miami, which ran a separate IOT track this year.

IoT is at about the stage where Big Data was in 2007, concluded one panel concluded. We’re now seeing use cases leading to real value such as smart cars and smartphones on the consumer side and operations management and smart energy in enterprises, asserted Sudip Chakrabarti, partner at Lightspeed Venture Partners. And the technology stack has matured for Big Data in ways that support those use cases.

“It’s not yet the next big thing,” as long promised, said Battery Ventures investor Abhi Arunachalam, pointing to a lack of standardization, for one thing. IoT is its own market with its own stack.

Hardware is getting easier, but it’s still hard, agreed James Pace, CEO of IoT device management vendor Runtime. Devices have not been modernized, they’re not standardized and there’s a lot of technical debt. It remains difficult to manage intermittently connected devices. Containers have solved many, but not all, of the problems.

He pointed to the need for an open API to gain independence from chip vendors. The open-architecture RISC-V project from University of California Berkeley, thought of as an open-source version of ARM, was featured as one potential way to gain that independence.

They discussed the need to push computing to the endpoints. Sending petabytes of data back to a central system is unsustainable, Chakrabarti pointed out in a separate session. As devices get smarter, he predicted that in the future, some processing will be done at the edge, some at the gateway, and some at a data center in a closet, and some in the cloud. That will create another set of problems: How do you monitor, debug and secure this type of truly distributed system?

The panelists also cited the need for specific hardware for IoT and interoperability.

Most IoT vendor products are not interoperable, Pace pointed out. Runtime is involved in the Apache Mynewt project, an open source operating system for IoT. It’s just one of many IoT OSes.

Asked what IoT 2.0 will look like, Chakrabarti predicted that IoT will evolve from data collection to user experience, with devices able to react in real time to what the user is doing.

Arunachalam also cited the need to pay attention to what people are saying about your project to help ensure there are developers interested in working on it. Improving developer experience will be important, he said, and the return on investment needs to be clear. In the future, security will be an even greater issue, he predicted.

In his session on the investor’s view of IoT, Chakrabarti put investment projects in four buckets:

Build: Investors tend to be generally “allergic” to hardware projects, he said, referring to the devices themselves. But devices need custom processors that are cheap and power-efficient, and technology that runs tablets and smartphones won’t be sufficient for IoT devices.

Manage: He calls this a “relatively more mature” ecosystem. Use cases there are mostly around visibility, analytics and alerting running on the cloud, but Lightspeed foresees opportunities in this area shrinking as devices get smarter. Management — monitoring, debugging, etc. — remains an area of opportunity. And no, the solutions developed for the IT world will not suffice for IoT, he said. Security will be another big opportunity for entrepreneurs, as traditional agent-based solutions aren’t feasible for less-sophisticated endpoints that number in the billions. Another big opportunity will be in patch delivery and upgrades served over a network that can be patchy at times.

Infrastructure: It’s an area Lightspeed is “spending the most time and feeling the most bullish about,” he said. Real-time and streaming technologies are taking center stage as well as event-driven and edge computing. His company invested in Serverless.com, an example of the event-driven paradigm.

Development:  You need to get developers using any framework you come up with so they can build applications that address those use cases. Lightspeed is looking at dev tools and PaaS solutions to help IoT developers.

Investors are cautiously optimistic that the promise of IoT will finally happen, he said, as real use cases emerge and the requisite technology matures to go along with it.

Susan Hall is the Sponsor Editor for The New Stack. Her job is to help sponsors attain the widest readership possible for their contributed content. She has written for The New Stack since its early days, as well as sites...
Read more from Susan Hall
SHARE THIS STORY
RELATED STORIES
How Paylocity Scaled Up Community in the Cloud with MongoDB .NET 7 Simplifies Route from Code to Cloud for Developers Docker versus Kubernetes: Start Here Enriching Dev Experience with Speedy Continuous Integration 3 Ways an Internal Developer Portal Boosts Developer Productivity
TNS owner Insight Partners is an investor in: Real.
SHARE THIS STORY
RELATED STORIES
How Donating Open Source Code Can Advance Your Career What Do 'Cloud Native' and 'Kubernetes' Even Mean? 3 Essential Tips for Adopting DevSecOps How Boeing Uses Cloud Native OpenTelemetry Properly Explained and Demoed
THE NEW STACK UPDATE A newsletter digest of the week’s most important stories & analyses.
The New stack does not sell your information or share it with unaffiliated third parties. By continuing, you agree to our Terms of Use and Privacy Policy.