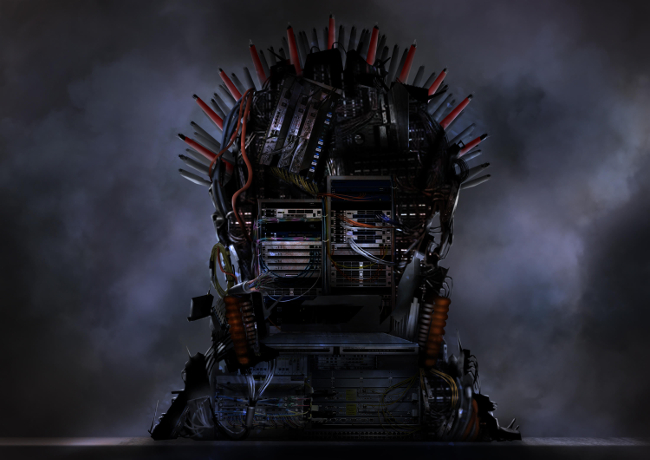 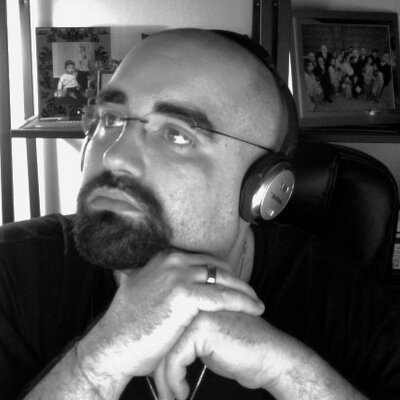 Marco Rodrigues
Marco Rodrigues is a Distinguished Engineer, Contrail Solutions Group at Juniper Networks. He has over 18 years of experience in building and running large networks. Recent focus has been helping drive and deliver telco cloud target architectures and strategies with various Tier 1 players. A big part of this strategy includes OpenStack and OpenContrail.

With such a myriad of information, you’d think people out there would have a deep understanding of why these topics are creating so much noise. I make it a point to ask everyone I meet this simple question: “In a few sentences, what does telco cloud, NFV, or SDN mean to you?” In many cases, people generally just quote a bunch of buzz words — most of which I’m programmed to forget. Others jump into the “What” and “How” of these trends. Only a very few understand the “Why” and that there’s a fundamental challenge to the current business models in their industry. Something has to change.

April 27, 2012, was the day I realized that the industry I’ve helped build over the last two decades has fundamentally changed. The date is easy to remember as I was exercising on an elliptical machine in my condo and looking out onto the NYC skyline, and I watched in awe as NASA’s Shuttle Enterprise made its final flight on the back of a Boeing 747. How could the shuttle’s end come to this? The reality was obvious: its primary job was done, paving the way for others to do theirs.

The telecommunications industry is going through a similar transition. The reality and conclusion are quite similar. One of the key metrics of building the internet was to build a network that allows for information to be consumed by anything and anyone and anywhere in the world in near real-time; all with a common access substrate (IP: internet protocol).

Congratulations to all those who have made this possible: We’ve commoditized ourselves.

Commoditization is a natural process of any successful industry. How successful has the internet become? To quote Juniper Networks’ founder, Pradeep Sindhu’s, plenary at the 2015 Optical Networking and Communications Conference (OFC15), “The Future of Transport Networks,” we have seen an exponential growth of the internet, no matter what metric is used. From 1991 until 2015, for instance, we have seen the following increases:

With all of the above metrics, public IP transport (internet) is clearly a resounding success. And there’s no end to the growth in sight. If anything, it’s accelerating with its success. Think about the Internet of Things (which to me implies everything that has value in being connected) and 4K Over The Top (OTT) video content at scale, which is just around the corner.

Shrinking margins are the last thing an exponentially growing industry should expect to deal with. So, what gives?

Everything as a Service

Let’s face it. Consumers and businesses appreciate the things they consume directly. Put differently, what they consume is what they value most. The assumption being, if they consume a product or service that they see value in, they will be willing to pay for it. Commoditization is inversely proportional to perceived value:

Let that sink in for a bit and congratulate yourself. You’ve built an invaluable industry that has transformed the world — but the world has to move on.

When was the last time you heard of a traditional electrical, shipping, transportation company, manufacturer or automaker (with the exception of a recent few) as a hub of innovation? They are targets of disruption for the very reason that there are little changes in existing business models — fueled by the fact people don’t directly value the products or services they’re offering.

The winner of value is the one who enhances the customer experience.

You’ve probably seen a form of this meme above trolling your social and/or professional networks. Here are a few examples (I took the liberty of adding the box in gray):

All these companies either have built, or relied on, other platforms. The platforms predominantly use the internet for connectivity. Traditional business network services are also being threatened with emerging SD-WAN markets.

If there’s one thing to learn from this post it’s this: winners of any industry provide direct value to the end-user (consumer/businesses). To stay a winner, you must continue to find ways to enhance value — or others will.

This was my Aha! Moment and when I ultimately accepted where things stand in the telco industry. The key now is to understand how we got here and what can be done moving forward.

People value what they consume. Let’s look at telco’s position in the value stack over the last century (sketched to make a point): 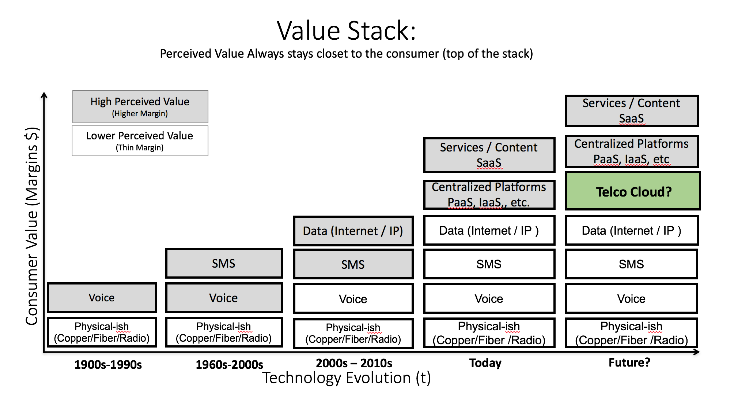 Communication operators were providers of wired telephony, mobile telephony, text messages (SMS), and data (internet) services. Historically, these were the direct services to be consumed by customers.

Something fundamental has happened in the last decade: network operators have moved into being indirect providers of value. Direct consumption of services and products are being enabled by platforms and companies that leverage communications infrastructures.

Traditional network operators are a piece of the value pipeline of which end-consumers rarely know about. Examples include:

To preserve the key elements of investment required in any growing business, it is existential to provide direct value to consumers and not be another widget. The question is how?

Cloud operators and critical SaaS platforms are the envy of most industries as examples of rapid innovation and efficient execution. They continuously solve customer problems and find ways to disrupt new industries. 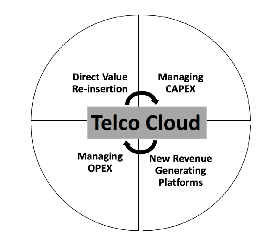 At its core, a telco’s goal of delivering greater value, similar to cloud operators, is what software-defined networking (SDN) and network functions virtualization (NFV) is rooted in — that is to say they can help transform traditional network operators into telco cloud operators that are agile, efficient and hubs of innovation. This transformation will allow telcos to build business and technical skills that allow value chain re-insertion while managing CAPEX/OPEX, and simultaneously creating new revenue streams. What this entails will be the topic of a future blog post from me.

If you work for a telco, it’s not all doom and gloom. Traditional cloud operators are traditionally not network operators. What are they doing? Building global networks to enhance the value of their platforms for their customers. The value provided by distribution can be directly and indirectly quantified as scale, application optimization (low latency), redundancy or network cost efficiencies. By adding further value to their platforms, they can continue to monetize at existing margins and/or build new revenue streams with new service options. 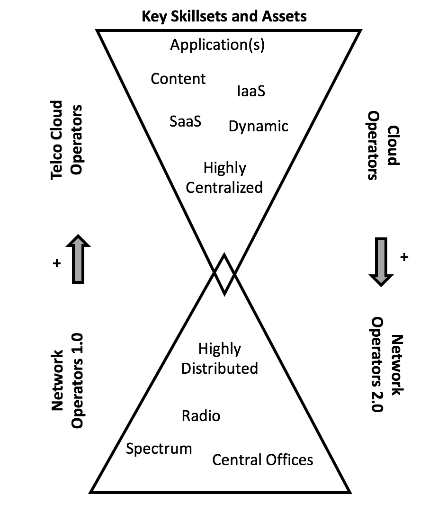 Recent news articles such as: “Submarine Cables Funded by Cloud Giants” and James Hamilton’s “Innovation at Scale” AWS re:Invent 2016 Keynote should have raised eyebrows at every metro and transport network CxO in the world.

Keeping that in mind, ask yourself: What have telco’s built in the last half a century? A highly distributed wired and wireless network connecting billions of people and soon to be tens (hundreds?) of billions of devices. They already own the network and the ultimate end game, which is last mile connectivity to the consumer of the data (aka, eyeballs).

Don’t underestimate this value. Others see it in one form or another and want it (Google Fiber / Project Fi anyone?) Another example of value in the edge by Peter Levine’s presentation “The End of Cloud Computing” is enlightening. The true challenge for companies who have been doing business for decades is pivoting a business model and workforce in a way that recaptures the value in the value stack.

The reality is simple: cloud providers want the network to utilize the inherent value it provides to their services, and telco operators need to reinvent themselves and reinsert themselves back into the value stack.

It’s a race I watch with intrigue. Who will win?

This post is meant to put structure and rationale around all the SDN/NFV madness currently gripping the internet and telco industry. There’s a fundamental problem with the current mode of operations for telecoms. But, there’s still a lot of inherent value in what’s been built to date. A way to further expose that value directly to the consumers will be fundamental to the evolution of telcos. The winners who emerge will be the ones who can simultaneously address organizational, technological and business challenges in the shadows of being disrupted.

Look out for future posts that will articulate the What and How’s of a telco cloud network and operator. These posts will elaborate on what a telco cloud is, how it addresses the four critical challenges incumbents of a commoditized industry face, and several key use-cases I’ve come to observe.

Marco Rodrigues is a Distinguished Engineer, Contrail Solutions Group at Juniper Networks. He has over 18 years of experience in building and running large networks. Recent focus has been helping drive and deliver telco cloud target architectures and strategies with...
Read more from Marco Rodrigues
SHARE THIS STORY
RELATED STORIES
Data, Analytics and AI: What Will Happen in 2023 Why CIEM Plays a Key Role in Your Cloud Security Strategy What Is the Docker .env File and How Do You Use It? Kubernetes for Windows Crossplane: What Most People Get Wrong (and How to Get It Right)
TNS owner Insight Partners is an investor in: Moment, Simply.
SHARE THIS STORY
RELATED STORIES
Kubernetes App Deployment from the Command Line Platform Engineering Won’t Kill the DevOps Star 5 Best Practices for DevSecOps Teams to Ensure Compliance What TNS Readers Want in 2023: More DevOps, API Coverage Data, Analytics and AI: What Will Happen in 2023
THE NEW STACK UPDATE A newsletter digest of the week’s most important stories & analyses.
The New stack does not sell your information or share it with unaffiliated third parties. By continuing, you agree to our Terms of Use and Privacy Policy.