Geek Glamor: Or, the Girl in the Glowing Gown 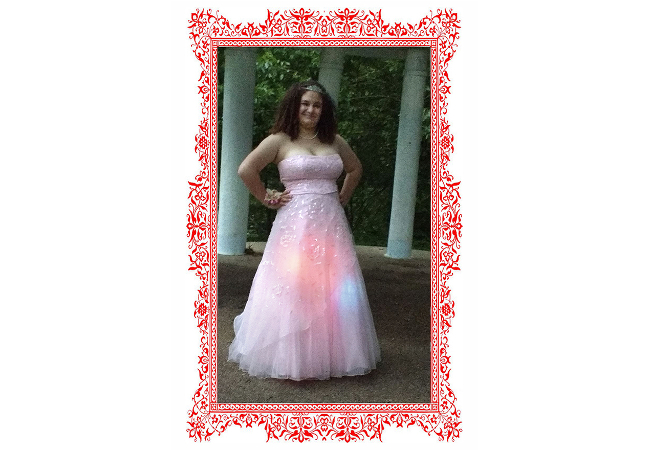 Well, OK, so Smith was probably the only girl at her prom whose fashion statement included Adafruit and a battery pack. Probably the only girl with a glowing gown at any prom anywhere, at least for now. But Claire Smith is comfortable standing out in a crowd if it inspires other teen girls to feel like they can pick up a soldering iron as easily and naturally as a sewing needle.

“I’m like any girl — I like pretty, shiny things,” said Smith in an interview with The New Stack. “And I also like tech. I made the dress because it was a challenge and a reaallly cool thing to do. But also to show other girls that fashion and technology are not mutually exclusive.”

The inspiration for Smith’s illuminated prom gown came from designer Zac Posen, who famously created a fiber optic dress for actress Claire Danes to wear to the Metropolitan Museum of Art’s gala celebrating its “Manus x Machina: Fashion in an Age of Technology” exhibition.

Smith was introduced to computer programming in 2015 when she did a Girls Who Code summer immersion program. She learned the basics of seven computer programming languages in seven weeks, and after completing the program she started doing hackathons. This homeschooled student from Parkville, Maryland, actually won the Baltimore Hackathon in 2015 and again in 2017, though with projects incorporating 3-D printing and app-building instead. She is now enrolled in a local community college and will start classes in physics, mathematics and mid-level computer science this year. 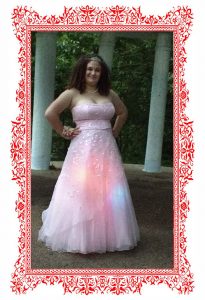 “The other thing I learned, after Girls Who Code, is that there aren’t currently all that many girls who do code,” said Smith. “I started wondering what could be done to change that. What I could do to change that.”

Enter the dress. The entire project took Smith about two weeks. “I spent more time researching and figuring out how I was going to go about it than actually hands-on making it — that part only took a couple days,” she said. Smith used Adafruit’s Flora, an Arduino-compatible wearable electronics platform, connected to six NeoPixels (tiny LED lights that work with Flora).

She stitched them onto an off-the-rack dress and connected everything using conductive thread. The design even features a battery pack stitched unobtrusively into the skirt, so she can power the unit off and on. Smith commented that the energy-efficient Adafruit’s two AA batteries kept her dress illuminated all through prom night, and those same batteries are still going strong.

Claire Smith was pleased with how the dress turned out, and even more pleased with the attention it ultimately generated. The story of her glowing gown went viral, inspiring a flurry of social media shares and multiple magazine stories — including one, appropriately enough, in Teen Vogue. “The dress incorporated fashion, which girls love, with tech, which I love. “said Smith.”So any girls reading the story got the message that liking tech and liking fashion can be the same thing.”

Smith’s dress was accepted as an exhibit at next month’s World Maker Faire in New York, and she has been raising money via GoFundMe to travel to the event. “I’m a triplet, which means my parents are paying for college for me and both my brothers starting this fall,” she said. “They were like, ‘Yay you made it into Maker Faire! But you’re going to have to pay your own way to get there!’”

Eventually, though, there will be life after the dress, and Smith is ready for it. She has founded a group to teach middle school-age girls in her home schooling community about technology, 3-D printing, and the environment. And, using a $3,000 grant from the National Center for Women and Information Technology and a partnership with Be You, Smith has organized an event for later this fall called “Make It Real” to teach girls both honey bee ecology, and how to 3-D print special water dishes for bees to drink from.

“Bumblebees populations are collapsing in part because there are not enough water sources or the wrong kind. So we will be printing special bumblebee watering platforms where they can hydrate without drowning,” she explained. “And the girls can connect the dots between something they love, animals and nature, with tech, something they might be intimidated by.”

Claire Smith believes that getting girls interested in, and even excited about, learning computer programming happens best in a hands-on setting. “The idea with my dress was, wow, this looks easy enough to do. I know how to sew, now we are just taking it a step further with sewable electronics, then another step further and learning how to program the Arduino and the Adafruit,” she explained. “Approaching it this way is really great because girls do crafts, anyway, and crafts are fun. And then suddenly tech stuff is no big deal, just a new way to craft.”

That craft-driven door into tech makerspace was always there, said Smith. She is simply exploiting it with satin and spangles and conductive thread, something only an 18-year-old girl can really pull off. “I just want to show them how to open that door just a little bit wider,” said Smith. “Show that tech can be anything you want it to be, applied anywhere in your life.”

SHARE THIS STORY
RELATED STORIES
What’s the Future of Feature Management? Engineering Leaders: Switch to Wartime Management Now The Graph of Life in a Post-Relational World AWS Brings AI/ML Training to Community, Historically Black Colleges The Process Equation (Cadence Is Everything, Part 2)
TNS owner Insight Partners is an investor in: The New Stack, Real.
SHARE THIS STORY
RELATED STORIES
Building an Internal Developer Platform Isn't Just about Tools WebTV in 2022? Vintage Tech Enthusiast Shows How on YouTube It's No Longer about How You Write Code but How You Operate It Fear and Layoffs: How to Cope with Tech’s Uncertain Times AWS Brings AI/ML Training to Community, Historically Black Colleges
THE NEW STACK UPDATE A newsletter digest of the week’s most important stories & analyses.
The New stack does not sell your information or share it with unaffiliated third parties. By continuing, you agree to our Terms of Use and Privacy Policy.