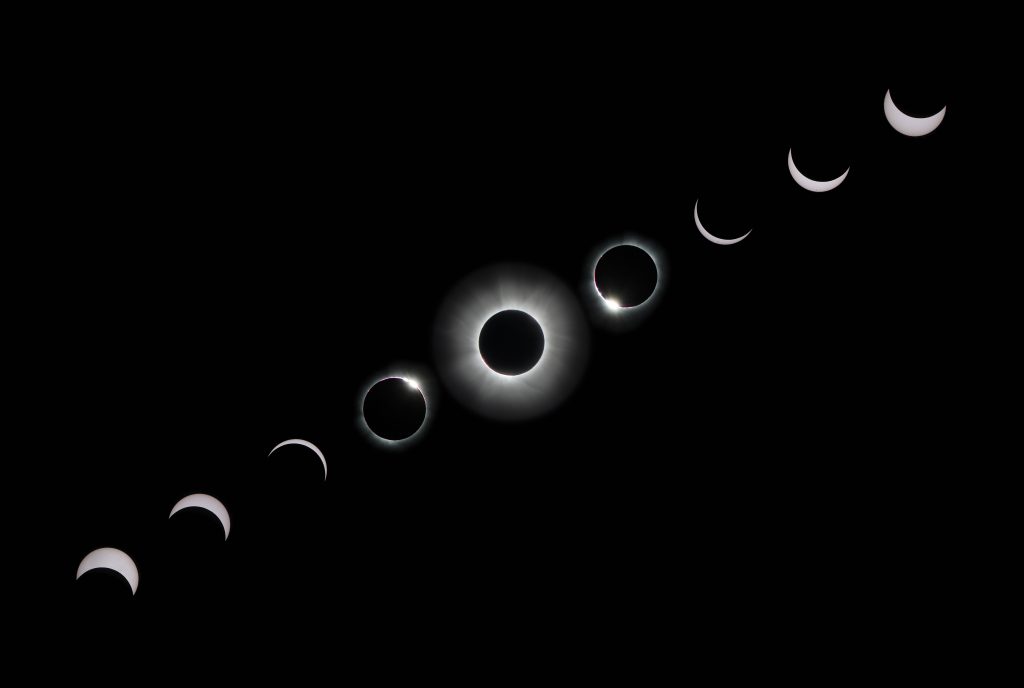 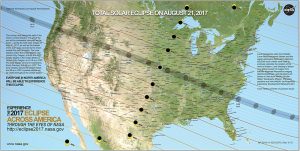 By now you’ve likely heard about the celestial mega-event taking place Monday afternoon in a sky near you (as in, the one we all share. Right over your head).

On Monday, Aug. 21, a 70-mile-wide swath of North America from Newport, Oregon to McClellanville, South Carolina will be plunged into noontime darkness, albeit briefly, as the moon covers the face of the sun. The rest of the country will still see partial versions of the eclipse — San Francisco, for example, gets to experience 75 percent moon shadow, Manhattan closer to 70 percent. Here is a nifty interactive animation from Time Magazine showing what the eclipse will look like from any given U.S. zip code/location.

It’s the first total solar eclipse visible from the continental United States since a rinky-dink 1979 event that caught a partial corner of the Northwest. This upcoming eclipse is a truly the Big Kahuna, sweeping the entire nation from coast to coast —  the first to do so since 1918. And people have been losing their minds a little bit at the prospect. Even NASA is getting a little hyperbolic, promoting this as “The Great American Eclipse.”

People are right to be excited. A total solar eclipse is a deeply thrilling thing to experience. And also rare: statistically, any given location on Earth gets crossed by the moon’s daytime shadow once every 360 years, on average. The majority of the US population lives outside of that 70-mile strip, called the Path of Totality, and will only get to see a wedge of the blocked-out sun. Those within the path, and particularly those along its centerline, get to experience the eerie sight of the sun disappearing almost entirely like a black hole punched out of the sky. It is a truly unforgettable experience.

If you’re stuck at work on Monday, or simply not inclined to go outside, or maybe just an astronomy nerd who planned carefully for this but is standing at the point of maximum eclipse (Carbondale, Illinois, where hotel rooms sold out over a year ago) in a downpour… well, take heart. There are all kinds of virtual ways to view the show.

Best bet is probably good ol’ NASA, which will stream the event live on a number of platforms, including its official Facebook, Periscope, Twitch and UStream pages, as well as on NASA TV and the official NASA YouTube channel. You can even download the official NASA Great American Eclipse apps for iPhone and Android and sneak in some under-your-desk eclipse viewing on your phone.

If you do go outside, here is the obligatory warning: DON’T LOOK DIRECTLY AT THE SUN, DAMMIT. Yes, this is really cool, and yes once the moon is mostly covering the face of the burning sky orb things do look much darker. Even dimmed, however, looking directly at the sun can still seriously damage your eyes, which you are going to need later for focusing on the computer screen. Just. Don’t. Not even through sunglasses.

If you didn’t already procure yourself some eclipse viewing glasses, good luck getting your hands on some. Nothing says nerd-chic like a pair of cheap paper-framed solar-eclipse sunglasses, but by now that shit has sold out pretty much everywhere.

Also, apparently unscrupulous sellers have been flooding the market with ineffective fakes to make a quick buck. So you want to make sure whatever you’re putting betwixt your peepers and the sun is certified safe by the American Astronomical Society’s handy list of recommended brands and vendors. Good glasses will be marked with one of the “sun safe” certification logos.

While convenient, solar-eclipse glasses are not a must-have, though. You can make a pinhole viewer, which is a simple, safe, and inexpensive alternative to looking directly at the sun.

Number 14 welding glasses, manufactured for the express purpose of safely gazing upon high-intensity UV radiation, will also do the trick — plus, you’ll look totally badass. Or check Pinterest for DIY solar viewers — the cereal box one is pretty good — like we said, the innerwebs are going insane over this crap. JUST DON’T LOOK AT THE SUN WITH YOUR NAKED EYES OK?

There truly is nothing like standing in the Path of Totality. Even a deep partial eclipse — even 95+ percent — is but a pale shadow (pun intended) of the surreal magnificence of totality, and it is worth trying to get yourself somewhere inside that path come Monday.

In the half-minute or so before totality, the light dramatically dims to resemble a very deep, blue twilight, and stars and planets start to emerge in the darkened sky. The air temperature drops noticeably. When the advancing moon snuffs out the last gleam of sunlight at the onset of totality (the only time it is safe to look directly at the sun) the pearly white glow of the solar corona leaps into view. For about 2.5 minutes humans, animals, even bugs, are awestruck. Daytime birds stop singing their songs, while nighttime crickets begin to chirp. The hair stands up on the back of your neck. Even the moron at the back of the crowd (yes, it is going to be crowded) who looked too long at the sun without protective glasses will briefly stop screaming MY EYES OH GOD MY EYES.

So going out of your way to get the full eclipse experience is a pretty great thing to do. It’s really not too late to get yourself somewhere with that path.

Nerd note: Around 12 million people live directly in the path of this year’s show — 3.68 percent of the U.S. population. If you happen to live within the Path of Totality, consider yourself very lucky. Any given location on our planet gets completely covered by the moon’s shadow on average about once every 360 years.

Some places may go for several thousand years without experiencing totality, although some others are much more fortunate. The dark gods must really love Carbondale, Illinois because the center point of this year’s eclipse gets another one in 2024, the next time we get a total solar eclipse over the continental US. Though word has it that one is not going to be as good. We dunno why, ask NASA.

If you DO get yourself there, here is what to expect from the show:

The time of the eclipse will differ depending on your location. In Salem, Oregon, for example, the partial eclipse will begin at 9:05 A.M. local, with totality lasting just under two minutes. The longest time of eclipse will occur in southern Illinois — lucky Carbondale! — with totality lasting for two minutes and 40 seconds, from 1:20 to 1:23 p.m. local. The eclipse then exits the mainland from the sure-to-be-teeming beaches of South Carolina, where TNS staff will be keeping an eye on things (through protective goggles of course).

Here are some fun astro-nerd facts about phenomena that occur during an eclipse so you can impress your fellow sun-gapers:

So! Go forth and gaze, whilst of course using protective eyewear, and let’s all have an awesome eclipse! Here’s hoping the skies stay clear and NASA’s servers stay up.

SHARE THIS STORY
RELATED STORIES
Entrepreneurship for Engineers: Avoiding Feature Bloat Why Your Code Sucks: Common Excuses for Bad Programming How to Get Started Filling 3.4 Million Cybersecurity Jobs Platform Engineering Won’t Kill the DevOps Star Watch Out, Attackers Have Their Heads in Your Cloud!
TNS owner Insight Partners is an investor in: Flip.
SHARE THIS STORY
RELATED STORIES
CES 2023: Robots, Astronauts, Schwarzenegger and Flying Cars It Happened to Me: How I Suddenly Owed AWS $13,000... How We Manage Incident Response at Honeycomb Golden Paths Start with a Shift Left Watch Out, Attackers Have Their Heads in Your Cloud!
THE NEW STACK UPDATE A newsletter digest of the week’s most important stories & analyses.
The New stack does not sell your information or share it with unaffiliated third parties. By continuing, you agree to our Terms of Use and Privacy Policy.