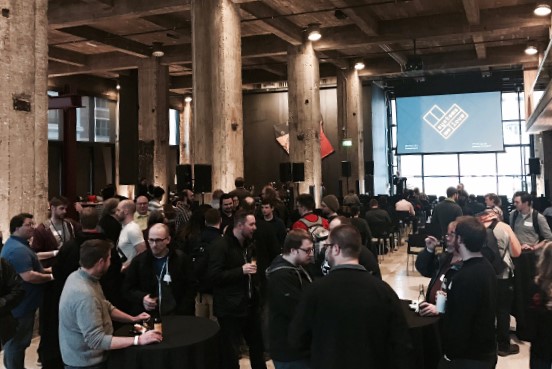 In mid-March, the second “Systems We Love” conference hit Minneapolis. The first one took place in San Francisco in December, and there seemed to be a demand for more. By February 23rd, the organizers collected up all the new proposals for talks in Minneapolis, and on March 16th, at the Target Plaza Commons, lovers of complex systems gathered to celebrate their collective fascination.

This week the videos appeared online for the conference’s talks, giving curious people who missed the conference a glimpse of some of the fun.

Troy Benjegerdes had subtitled his presentation “how to do precision farming on Mars,” though its main topic was open source hardware (“Hacking silicon for fun instead of profit“).

Benjegerdes, who grew up on a farm, became fascinated by the question of how Mars farmers would replace parts on their technical equipment since you can’t just have new replacement parts mailed up to you from earth. The answer may lie in today’s open hardware platforms. One of his slides had the headline “Open source in SPACE,” while another pointed out that “If we can make silicon, space is easy.”

All the talks were eclectic and filled with new perspectives. Joe Laha described “the life of a professional flipchart jockey” in a talk titled “Pay No Attention to the AV Tech Behind the Screen” — exploring the complex communications technology used for large-venue presentations.

He calls this world as “AV at scale…if you should choose to chuck the very well-paying, good hours world of technology and come with us to the very low-paying, long-hours world of AV stuff.” And the audience found it highly instructive.

Laptop manufacturers convince themselves their new shiny is going to be a thing; means @joelaha carries all these adaptors. #systemswelove 😂 pic.twitter.com/iFtq47vy17

At #SystemsWeLove, @joelaha told us how AV equipment tends to run on Windows XP and so maybe it's not a good idea to enable wireless control

And Julian Squires had always been fascinated by the timeouts of requests  — one UDP service made a couple hundred thousand requests per second, each of which had an associated time-out. This inspired some research, and he walked the through various ways they’re implemented —  with red-black trees in Linux, and with hash tables in Node.js — joking at one point, “Hopefully this will spur you all on to make lots of benchmarks…”

Joyent software engineer Patrick Mooney titled his presentation “On wings of exec(2),” describing the essential system function call and calling it “a gateway to other system topics.” Launching everything from shells scripts and Bash scripts to Python programs (and Bash scripts that run Python programs), “Exec touches a lot of things in the system, and can expose us to those things and let us enjoy those things.”

“That’s where the kernel is,” he told the audience towards the end of his talk. “That’s where all the fun stuff is.”

Systems We Love is a special kind of conference, where obscure or offbeat topics are just part of the fun. System administrator and developer Ivan Richwalski took a long and loving look at the renegade 90s-era operating system, BeOS — a reminder of the days when DOS and Windows 95 competed with OS/2, Taligent, and NeXTSTEP.

BeOS ran on its own hardware, and offered object-oriented APIs and “multi-threading everywhere.” The BeBox personal computer was tricked up with LEDs behind the front panel, just to show the CPU load on each of its two CPUS, and Richwalski jokes that “I think they started a committee for what ports do we want to put on this machine, and just didn’t know where to stop.”

“If the computer isn’t on fire, returns some other value.”

The BeOS was even ported to the Macintosh and clones — back when clones were allowed — and later to x86 PCs. But when it was discontinued, a non-profit organization started the Haiku project to create a free and open source replacement for the original BeOS modules, which continues improving and adding on to it to this day.

Mixed in with all the gloriously geeky presentations were some real insights into our modern times — and even a few actionable lessons. Technical writer Heidi Waterhouse — who described herself as “technical but not a coder” — drew a knowing response from the audience when she talked about how our jobs can be physically unrewarding. “I don’t know about you, but I go to work every day and make invisible things for hypothetical people who may or may not use them.”

She shared a remarkable exploration of the lessons learned from the ways knitting pattern documentation changed over the decades, which included a slide of a lace pattern from her great-grandmother’s petticoat, knitted around 1910.

.@wiredferret "I make invisible things for hypothetical people that may not use it" so turned to tangible knitting. #systemswelove pic.twitter.com/GXsmr2NOZI

“Because everybody had this foundational understanding, we had a super-compressed language to talk about knitting,” she told the audience. Starting in the 1970s, however, “We sort of dropped home [economics] as an expectation.” Her conclusion? “We have a ton of hidden expectations.” And of course, the same thing comes to the world of coding.

She had the perfect example: “imaginary containers that I imaginarily call to imaginarily do something. That level of abstract reasoning, while it all feels really natural to us, is, again, a learned skill.” New users may be used to computers that perform one task and may struggle with the concept they can be programmed to perform more — while technical people have moved on to presiding over vast and mutable ecosystems.

She suggests interviews for programming jobs focus on whether the applicant grasps key concepts, since “how you code is obsolete. By the time you get hired, you still have to get brought up to the special unique language of wherever you’re at, so it doesn’t matter.”

And when it comes to users, watch your analytics to determine where they’re having trouble with your application. “It turns out that people don’t actually like asking a product for help.”

"By the time anyone is reading any documentation, they're already angry." — @wiredferret at #SystemsWeLove Minneapolis

Her advice? “Figure out what obvious thing to you is not obvious to them. Because that’s really going to let you help them.”

Knitting is enjoying a Renaissance thanks to the clear and user-friendly instructions at Knitty and the helpful patterns at Ravelry, which she calls “the StackOverflow of knitting.” There, knitting patterns are presented with ratings, usage statistics, pictures of how they’re being used, along with blog posts, reviews, comments.

“Why don’t we have this for code modules…? There’s a lot of things you could share, and I’d love to see a more diverse, inclusive, exciting community doing something like this,” she suggested.

I came to #systemswelove and now @wiredferret has nearly convinced me to learn knitting. I'm totally impressed.

There seems to be a real enthusiasm for the Systems We Love conferences, and its organizers are equally passionate about keeping it going. Google software engineer Jess Frazelle was on the talk-selecting program committee and this week described what she loved about the conference in a video interview with Bryan Cantrill: “When you can see someone’s passion coming through the talk — which is the same thing with Papers We Love — and it’s like their weird thing.”

“I think — there’s something about when people are thinking about the thing they love. It doesn’t matter how weird it is, or even if you disagree with it,” Cantrill said.

When their discussion turns to the next city for a ‘Systems We Love’ conference, Jess tosses out New York. The problem with the Bay Area is “It’s just too techie — there’s so many tech people.”

Share this story
RELATED STORIES
How Can Open Source Sustain Itself without Creating Burnout? How to Bridge the Developer-Designer Gap How Idit Levine’s Athletic Past Fueled Solo.io‘s Startup Charity Majors: Taking an Outsider's Approach to a Startup Adobe's Internal Developer Platform Journey and Lessons
Share this story
RELATED STORIES
Experts Weigh in on the State of Site Reliability Engineering A Redesign for The New Stack Tackling Developer Onboarding Complexity Burning Man Returns with a Quest for Sustainability, Meaning Tips to Make Your On-Call Process Less Stressful
THE NEW STACK UPDATE A newsletter digest of the week’s most important stories & analyses.
We don't sell or share your email. By continuing, you agree to our Terms of Use and Privacy Policy.