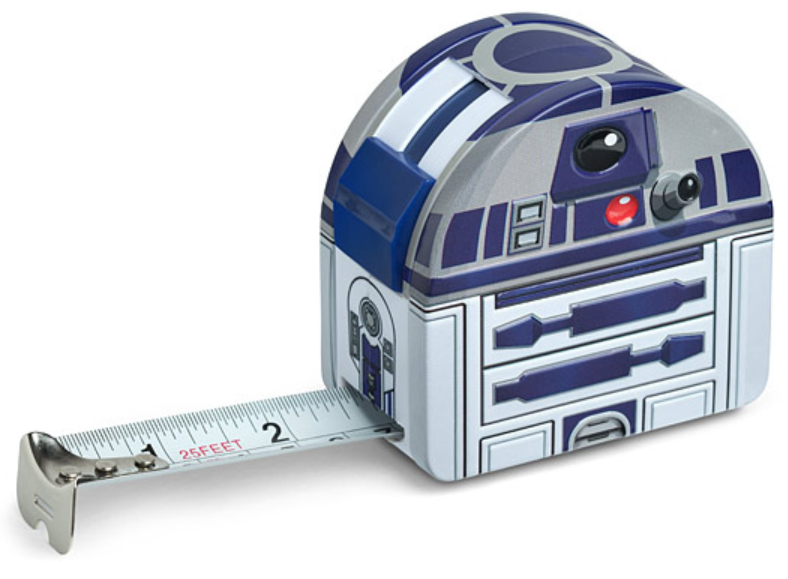 Well, it’s the thought that counts, we must remind ourselves, when we unwrap the box to find yet another sweater. We admit it, it’s hard to buy for geeks. And after all the eggnog is consumed, the truth is finally told: Here’s what we really wanted for the holidays….

It seems like this year everyone wanted either a drone or a virtual reality headset. But why not have both? This year ThinkGeek.com began selling the special “GhostDrone 2.0 – VR Edition,” which connects its dangling camera-in-the-sky directly to your headset using a Bluetooth connection. And be sure to check out the “See What the Drone Sees” video at ThinkGeek.com.)

And while most drones are hard to control, the Ghost Drone 2.0 can be controlled just by tilting and moving your phone. An app translates your phone’s movements into navigational commands. There’s even an “auto-follow mode,” so your drone can fly along behind you as you traipse happily across the earth below (Other drones call this feature the “emergency mode,” which can have the drone follow you if … ummm.. you have to make a quick getaway for some reason). 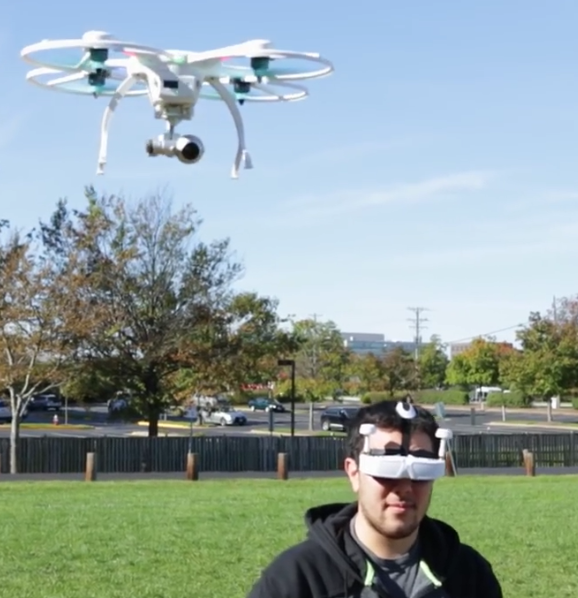 But best of all, if its battery starts to run down, the GhostDrone 2.0 is designed to automatically find its way back to you — instead of crashing helplessly into a tree!

Amazon’s Alexa for the Raspberry Pi

It’s a very geeky gift for the geek who has everything. There’s lots of talk about smart homes and voice-recognition — but what if you’re a budding young visionary who wants to build your own smart device?

It turns out there’s already a hardware-hacking development kit that lets you connect Amazon’s Alexa Voice System to a Raspberry Pi board. In December, Conexant released the AudioSmart 2-Mic” — and the rest is left up to your imagination. 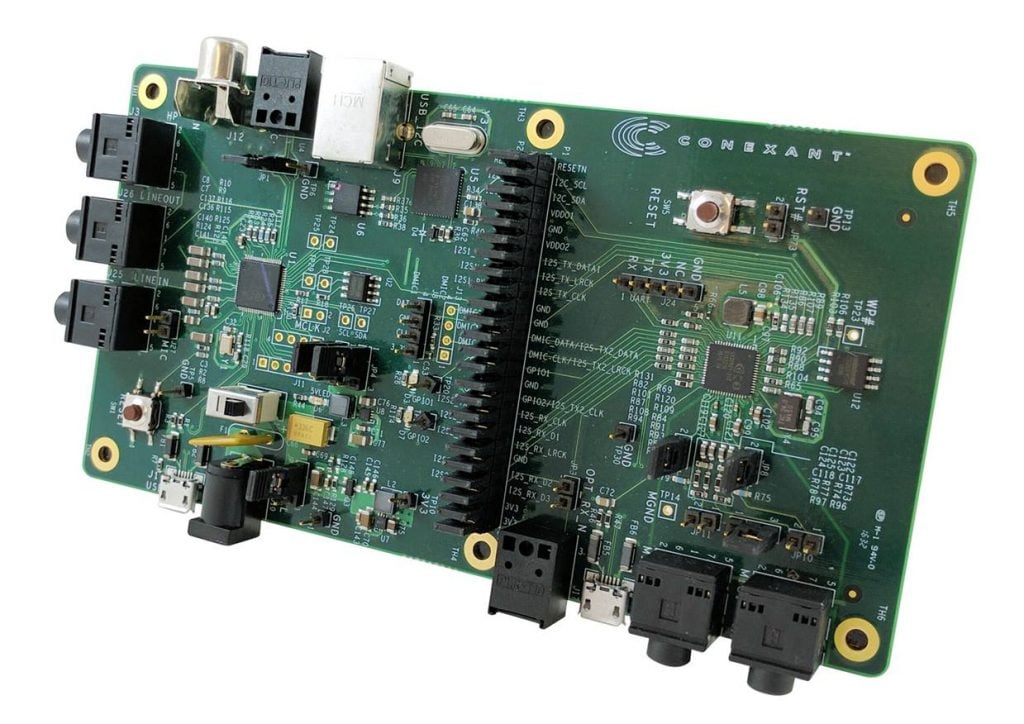 For $299, they’ll sell you a kit which enables “speech recognition and voice control from a distance” — even filtering out echoes and other background noise to hone in on spoken commands. And all that technology ultimately comes with a pretty impressive-sounding pedigree, if you’re someone who likes to tinker. “Together with Amazon, we are providing the tools that developers need to prototype…based on proven technology that is currently deployed in millions of consumer devices,” the company stated.

There’s lots of talk about toy robots — but technology has advanced so far that it’s now possible to buy real ones. And while there’s many to choose from, Meccano‘s “Meccanoid 2.0” has that classic Erector-set chic. It’s delightfully complex. There are 497 pieces — and six motors — that you have to assemble yourself. But when you’re finished, you’ve just built your own adorable two-foot tall mechanical servant. Sort of. 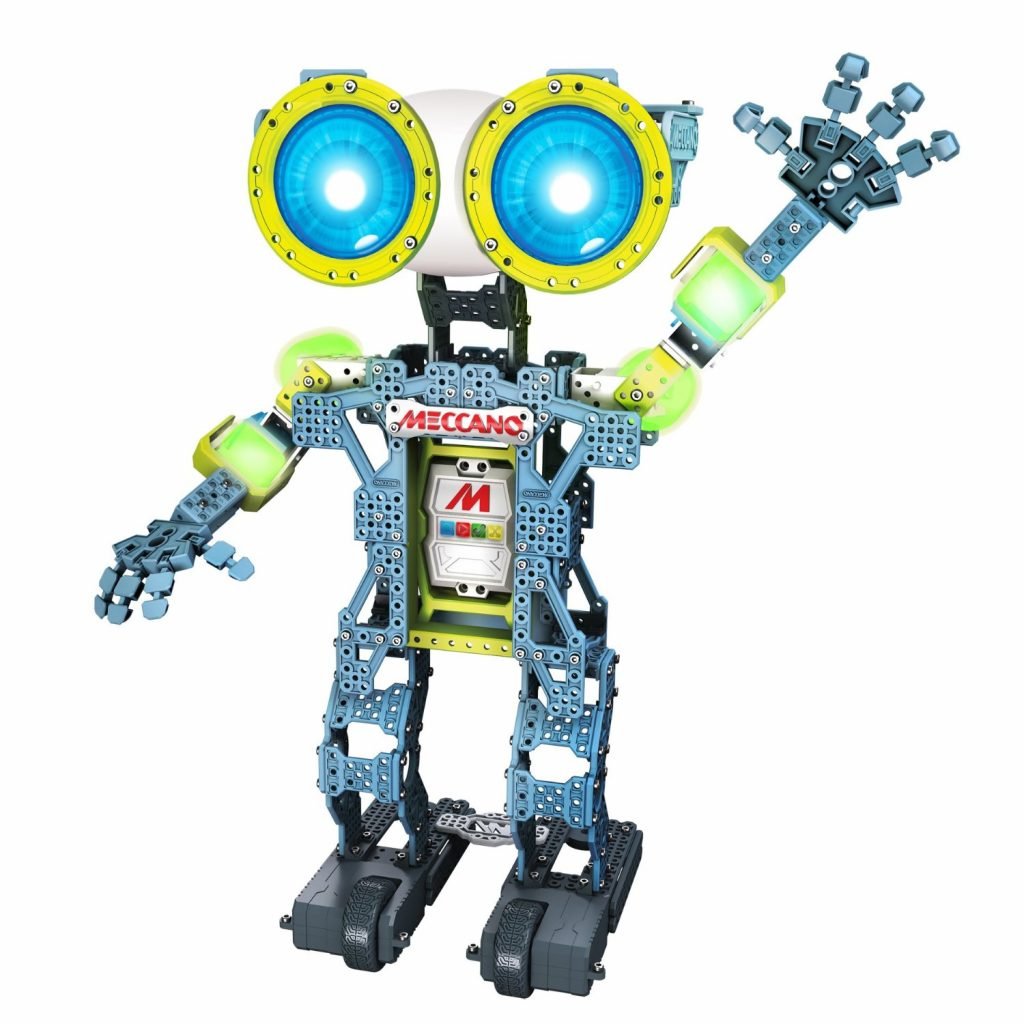 It’s voice-activated — command Meccanoid to “walk forward”, and your mechanical minion obeys! It talks! It rolls across the floor! And it also mimics the rituals of our human society, at least in that Meccanoid knows over 3,000 pre-programmed phrases, and will try to entertain you by reciting robot trivia. But best of all, it’s programmable — and you can program Meccanoid to do your bidding in several interesting ways. 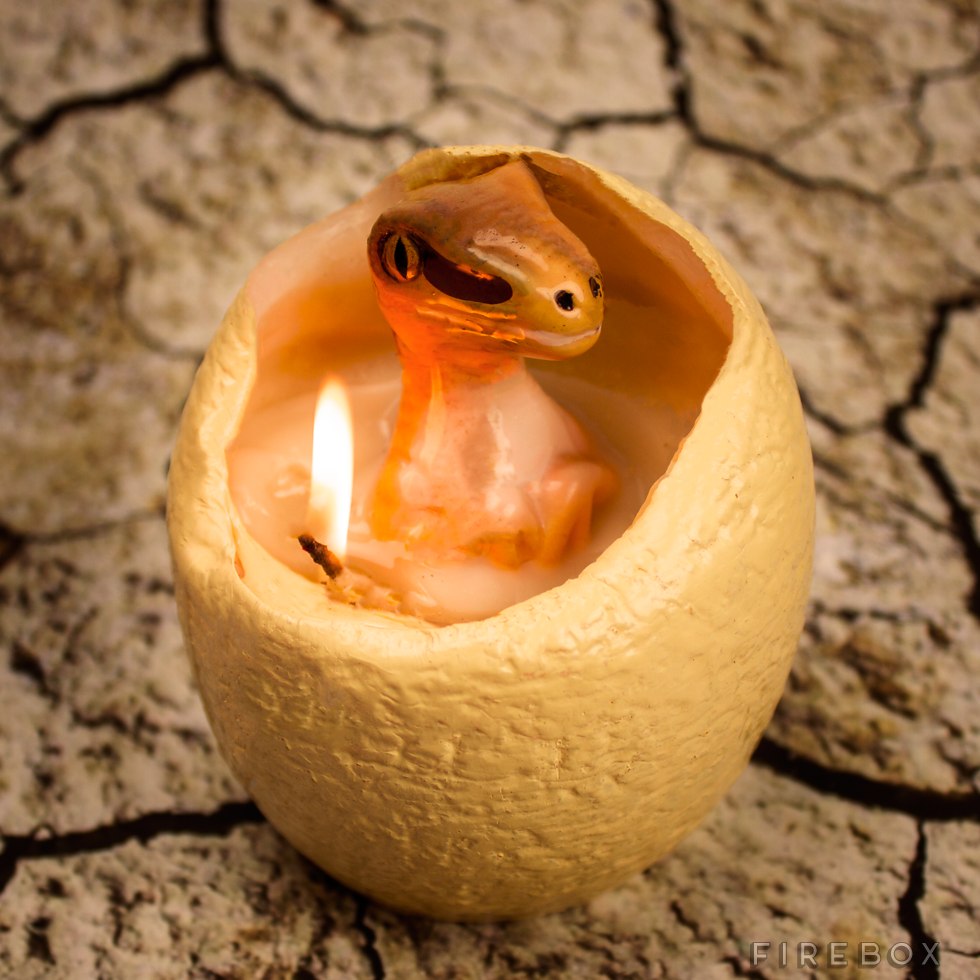 Our Geeky Gift Guide from 2015

Jiggle around Meccanoid’s arms, and it’ll remember the exact pattern, and repeat it again upon command. Or you can just tell Meccanoid to start moving its arms the way you’re moving your arms, according to one lengthy Amazon review. There’s also even what appears to be an eerie “voodoo doll” mode, though they’re calling it “rag doll avatar,” where you touch the robot’s icon on the screen of your smartphone or tablet, and it responds in real life…

And when you’re tired of your humanoid robot, you can rebuild the whole thing as a robot dog … or a robot dinosaur!

My Own Star Wars Phasers

I’d also thought that for this Christmas, it’d be fun to wield my own phasers. You know, like on Star Trek. 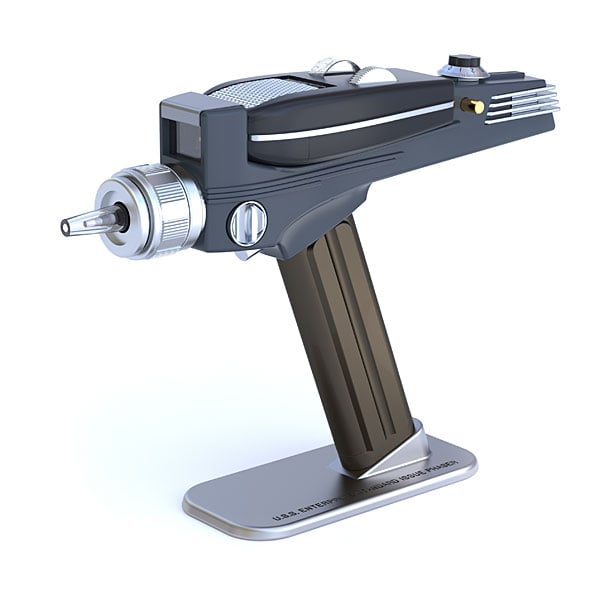 Just remember, these realistic-looking replicas have a much more important mission than stunning your alien enemies: They switch channels on your TV.

Also in the Star Trek frontier of home improvement, Santa could also bring you a couple of Star Trek-themed lawn gnomes, and a set of salt-and-pepper shakers shaped like the Enterprise: 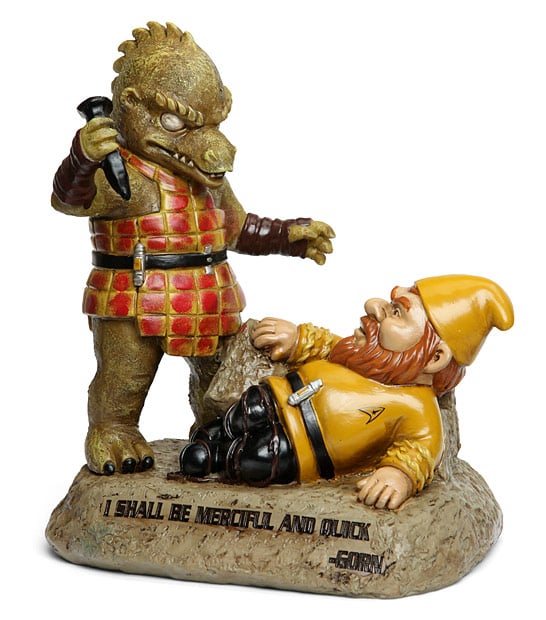 Seems like everyone these days wants to sell you R2-D2. Disney actually sells a 10.5-inch talking R2-D2 replica — and there’s also lots of other, more practical versions you can also use around the house. There’s an R2-D2-shaped tape measure as well as a thermos and a popcorn popper. And for the kitchen, there’s actually R2-D2 measuring cups. And check out this cool glowing 3-D night light.

There’s even a car charger that lets you plug your smartphone into R2-D2’s USB port: 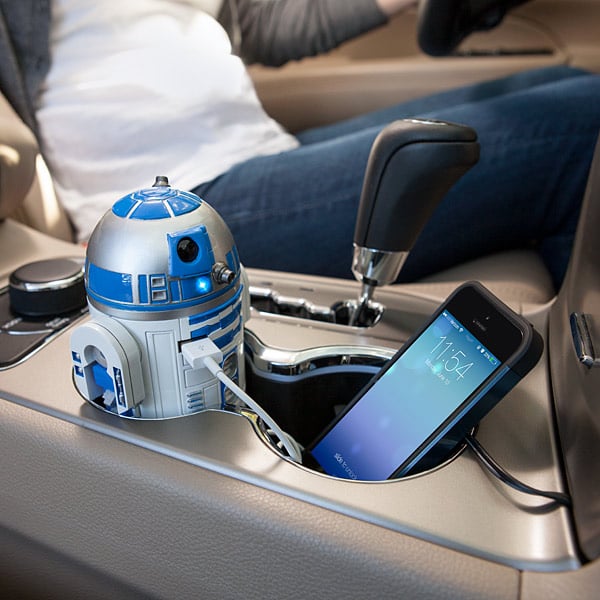 There’s also a special pair of rings for the Han Solo in your life. One says “I love you” — and the other one says “I know.” And if you know a “Star Wars” fan who’s a cocktail drinker, maybe they’d appreciate their own set of “geeki tiki” drinking glasses. They can down an adult beverage with Boba Fett, Chewbacca, Darth Vader, R2-D2, a Stormtrooper, or Yoda. 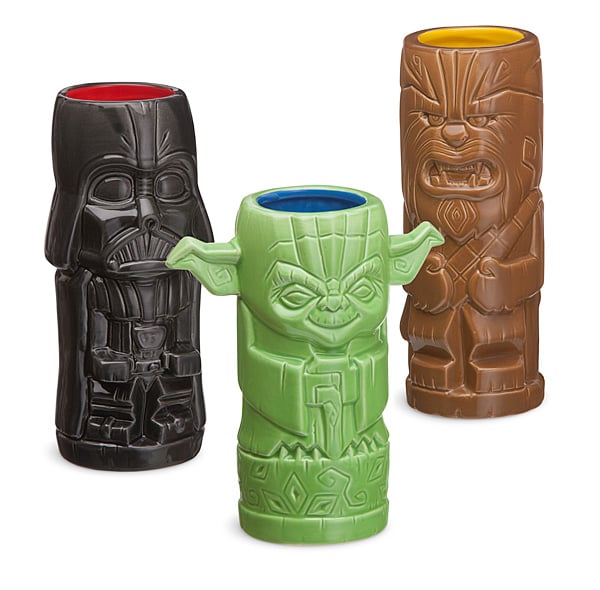 But I must’ve made Santa angry, because, instead, all he gave me were Darth Vader cuff links. 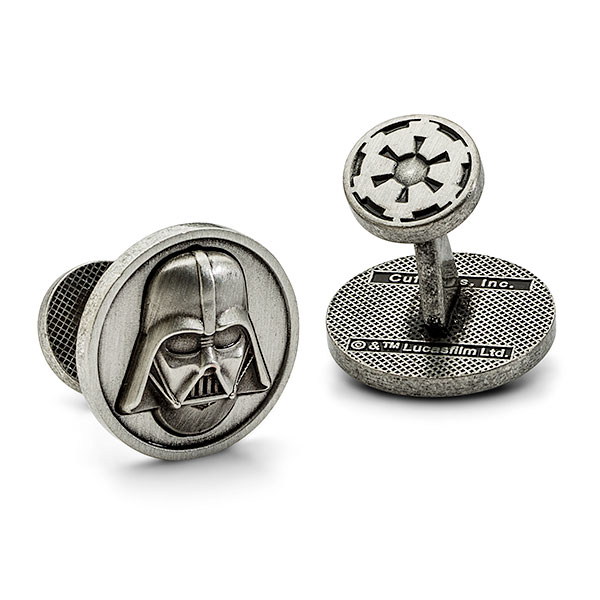 SHARE THIS STORY
RELATED STORIES
Platform Engineering Won’t Kill the DevOps Star 2022 in Review: AI, IT Armies, and Poems about Food Entrepreneurship for Engineers: Avoiding Feature Bloat How Jit Builds a Platform Engineering Mindset in the Cloud Wellspring of Creativity: Why Public Domain Matters
SHARE THIS STORY
RELATED STORIES
Entrepreneurship for Engineers: Building for Customers’ Love Golden Paths Start with a Shift Left Snack Stack: Turning Winter Comfort Food up to 11 CES 2023: Robots, Astronauts, Schwarzenegger and Flying Cars How Will Working in Tech Change in 2023?
THE NEW STACK UPDATE A newsletter digest of the week’s most important stories & analyses.
The New stack does not sell your information or share it with unaffiliated third parties. By continuing, you agree to our Terms of Use and Privacy Policy.