Getting Started Demo: Monitoring with a Time Series Database on InfluxDB Cloud 2.0

In this demo, Chris Churilo, director of product marketing for InfluxData, shows how you can get started setting up the newly released InfluxDB Cloud 2.0, a serverless time-series Platform as a Service (PaaS), in literally just a few clicks.
Oct 2nd, 2019 5:00pm by B. Cameron Gain 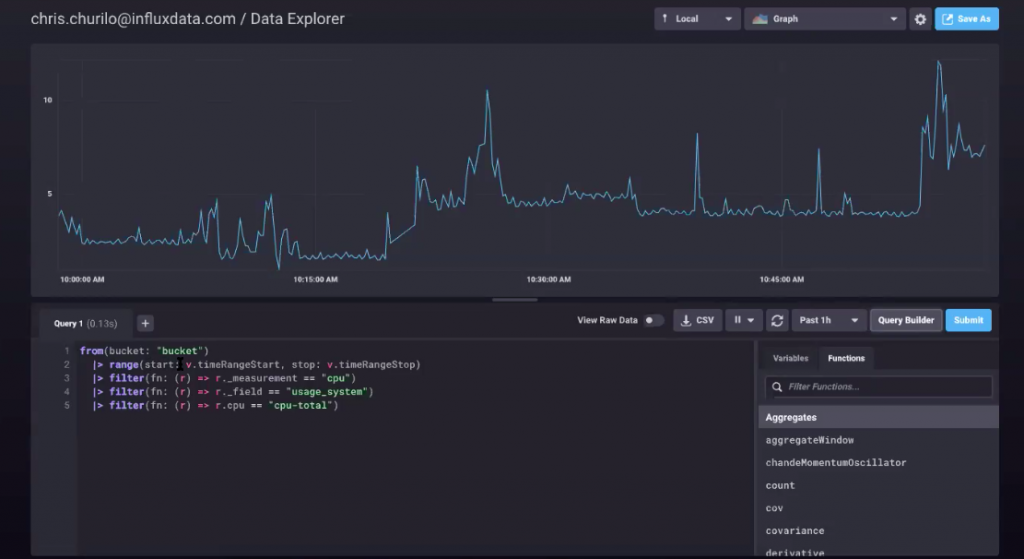 Creating and managing time-series databases, as well as databases in general, is still often seen as something that is notoriously difficult and complex to do. But InfluxData does not see it that way — indeed, in this demo, Chris Churilo, director of product marketing for InfluxData, shows how you can get started setting up the newly released InfluxDB Cloud 2.0, a serverless time-series Platform as a Service (PaaS), in literally just a few clicks.

The concept is that with InfluxData’s Chronograf dashboard and the Telegraf plugin, InfluxDB Cloud 2.0, as well as InfluxDB, can allow you to monitor, track and analyze such data points in a home-use environment, such as electricity consumption or room temperatures. And on a momentous scale, the power of the platform can also be applied to monitoring and forecasting trends based on tens of millions of data points ever second a world bank might require. Specific to InfluxDB Cloud 2.0, the platform is serverless, meaning users can deploy it without having to set up and manage storage or worry about managing server infrastructure. The usage model is pay-as-you-go, but to get started, you can give it a spin, for free, without a credit card.

Churilo walked through the steps of accessing InfluxData’s website, clicking on n the Cloud icon under Get InfluxDB. After adding your information (without having to input credit card info. for the free version), you can then set up databases called buckets, dashboards and alerts.

A recommended — and fun — way to get started is using InfluxDB Cloud 2.0 to collect and monitor your laptop’s performance data. As Churilo showed in the demo, you click on the Load Your Data icon, and are prompted to set up the Telegraf plugin.  If you are unfamiliar with Telegraf, or with any of the processes along the way, relevant links to documentation and further reading are provided, as well as short hints, on screen.

“The nice thing is the team really did a good job is making sure that there’s documentation scattered throughout the user interface,” Churilo said. “So, if I don’t really know what Telegraf is, I can easily go in and just look at this little hint — 0r I can just start going deeper into a guide about Telegraf.”

A key feature of InfluxDB Cloud 2.0 is the platform’s underlying Flux programming language InfluxData released, to offer users more freedom to tailor the platform’s analytics capabilities to their specific needs. Based largely on JavaScript, a user who is familiar with JavaScript should be able to master its basic commands in a few minutes.

With the UI, it is also possible to access relevant Flux code used in real-time when the platform performs a query through the script editor. This option enables you to “actually see what Flux looks like,” Churilo said. “And For me, this is a much easier way to learn,” because you can follow all of the Flux commands beneath the graphics UI in real time,” Churilo said.

But while this demo involved a relatively simple application, DevOps, as mentioned above, can leverage the platform to build big things, whether monitoring the data associated with structural data of bridges or electricity usage in major metropolitan areas.

“The essence of it is, is that we want to make sure that developers can get up and running and using tools that are going to be really important to their development work as quickly as possible,” Churilo said. “And we don’t want people to have to [worry] about all these configuration files and trying to figure out how to get started.”