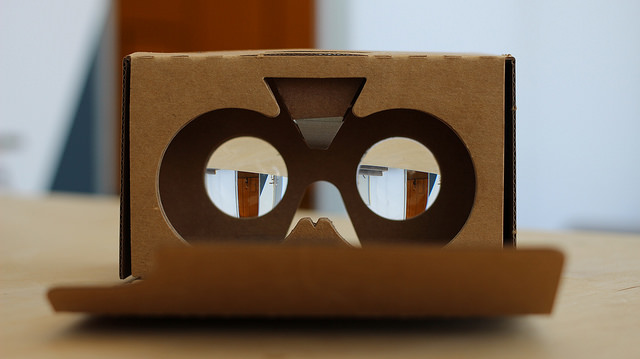 Feature image: “Google Cardboard 2” by Maurizio Pesce is licensed under CC BY 2.0.
TNS Annual Reader Survey
We need your input! Take 5 minutes to chime in and help guide our coverage.
Begin the survey

Google recently gave away their newest version of the Cardboard viewer at Google I/O 2015. It consisted of an updated cardboard frame, lenses and an improved activation button. It works with all modern, high-end smart phones. Cardboard applications present a stereo 3D rendering of scenes on your phone. With Cardboard the user can view and develop realistic “experiences,” becoming immersed in an interactive virtual reality (VR) world. Cardboard is similar in function to other VR systems, such as Oculus Gear VR.

The Cardboard apps for Android are mostly demos that introduce users to the viewer; however, the Cardboard app for Google Earth is functional and realistic. Using Google Earth and starting in Chicago, I traveled west, at high altitude, to San Francisco. Once there, I descended to street level (about 100 ft up) and flew around the city. The app renders pretty fast, although filling out the buildings took a couple of seconds, as I hovered in one place. I then journeyed to Portland and flew around downtown. In all, the Cardboard app gives a good feel for basic VR functions.

You’ll clearly need to have experience coding regular applications for Android and/or the iPhone before you are able to tackle building a virtual reality experience with Cardboard.

The following are a few places to check if you want to start to transition over from regular app development on an Android to VR development with Google Cardboard:

Then there are controls. When looking through the Cardboard viewer, how do you control the behavior of the app? You certainly don’t want to take the phone out, push a button, then put it back in the viewer to continue using the app.

One suggested solution is to use a fuse button. The idea is to display a button that you focus on for a short period of time, resulting in a push. Fuse buttons are used in the Cardboard app to chose which demo you want to view.

Another example shows up in the Cardboard app when you want to return to the home screen. Simply tilt the view on end and it goes back to the first screen.

Using the Cardboard viewer is pretty cool. Starting from scratch to build VR apps for the thing is fairly involved and you need to know quite a bit about programming for mobile devices before you get started.

The good thing is that Google has put Cardboard out there and made the backend stuff available so developers can get started learning the technology at a fairly low cost.

Who knows where it will go at this point, since affordable VR is pretty new. A lot of companies are selling their viewers, and it will be interesting to see how Google’s experiment in VR pans out.