The Ghosts of Toy Robots Past 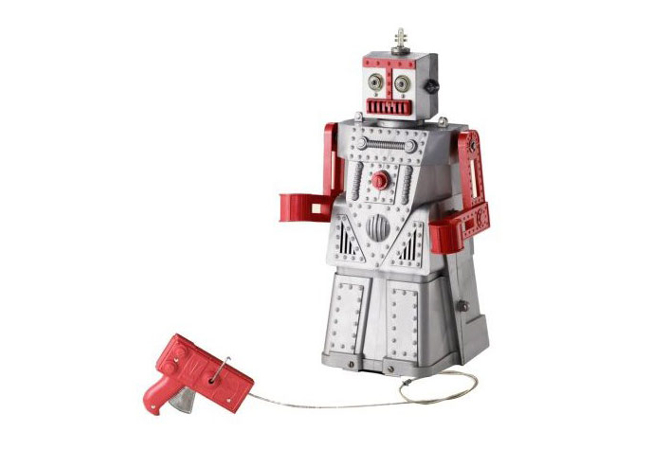 Last week Fast Company took a look back in time to the 1950s, when one of the first popular robot toys began appearing under America’s Christmas trees. Robert the Robot was “a 14-inch-tall hunk of plastic that could utter a few phrases, wheel around with a tethered remote control, and grip objects in his mechanical arms.”

Back in 1954, this prototypical miniature robot was envisioned as a tie-in for the film “Tobor the Great.” The movie’s complicated plot involved a telepathic robot that could fly spaceships and ultimately rescues its inventor and his son when they’re kidnapped by foreign spies.

Its hokey plot is a charming reminder of how robots began looming larger in the public consciousness. “Although Robert never appeared in the film,” reports Fast Company, “he received plenty of promotion on his own, debuting in the 1954 Sears Christmas catalog with an asking price of just under $6, or about $54 in 2016 dollars.” 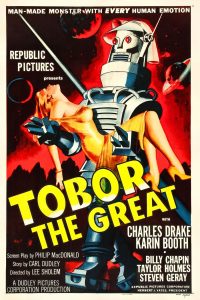 To suggest Tobor’s telepathy, the toy was also remote controlled — though, in 1954, that just meant a really long cord. And there was apparently still a novelty to that gray, molded plastic, since most toys were being made from tin, and imported from overseas. A long and fairly prosaic infomercial dramatized the design and production of this cutting-edge toy. (“Now comes the left arm. Then, the head. Finally, the right arm is put on… “)

Although it does warn children that Robert “can look right through you with his X-ray eyes.”

The eyes, of course, were lit by tiny light bulbs… But it’s nice to know Robert found an appreciative audience, being scooped up by adoring children — or their doting parents — all across the country.

Fast Company cites a newspaper article claiming the toy was the toy company’s biggest hit yet, and they followed up his success with a line of Robert the Robot t-shirts and flashlights. A nine-foot replica of Robert even greeted visitors to a toy store in downtown Cincinnati. He reportedly can also be spotted in the arms of Barbara Stanwyck somewhere in Douglas Sirk’s weepy 1956 melodrama “There’s Always Tomorrow.”

In these distant decades before the dawn of automation, Robert the Robot achieved another honor, according to Fast Company: “capturing people’s imagination long before we truly understood what robots could do.” The 1950s marks the beginning of automation in consumer products in washing machines and automobile transmissions, and Robert somehow represented that in the imaginarium popular culture.

Robert may have led a new generation into their automation-enabled future — but he wasn’t alone. If you search YouTube for “Robert the Robot,” you’ll also find another creation from the mid-1950s — a real-world, life-sized robot named Robbie, created by an Australian science teacher named Bernard Smith to demonstrate the potential of mechanical devices in our everyday lives. 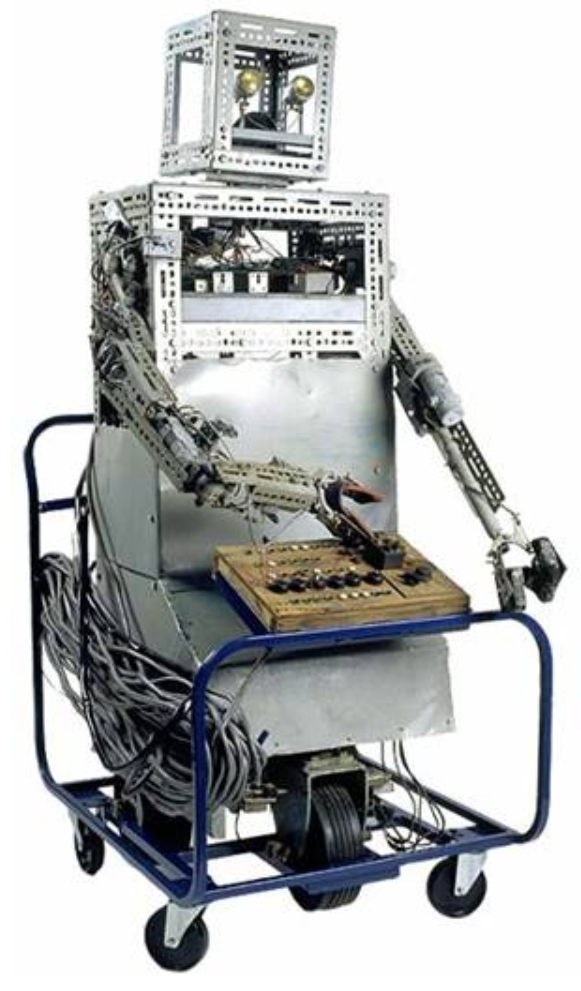 Robbie was built from scrap metal — Robbie’s hands were made from the calipers of bicycle brakes, and other post-World War II parts included the tail wheels from Mustang fighter planes. He was powered by two 12-volt car batteries (and eleven 24-volt batteries from airplanes), with more than 200 yards of wiring inside.

“And he’ll do your bidding if you press the right button in the remote control,” says the cheery announcer in the video — in a horribly unenlightened voiceover which delights in suggesting the robot as a futuristic replacement for housewives. But Robbie’s human form “reflected the way people imagined the future might be,” according to Museum Victoria — “a world with mechanical servants to carry out their every whim.”

And it didn’t stop there. It was the next year that the movie “Forbidden Planet” unveiled its own Robby the Robot — using a strikingly similar promotional poster as “Tobor The Great.” 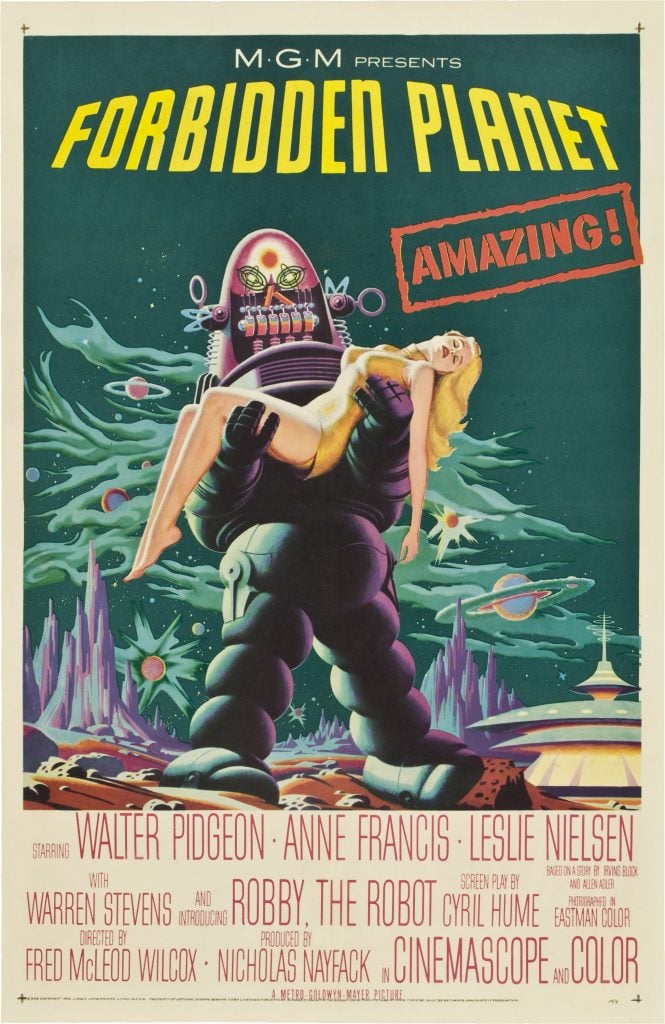 This Robby became such a science fiction icon that he appeared in a second movie — “The Invisible Boy.” It’s implied that Robby has traveled back in time to the 20th century, where he builds a supercomputer that can render the boy invisible, though according to a plot summary on Wikipedia, “it becomes clear that the supercomputer is evil and intends to take over the world using a military satellite.” 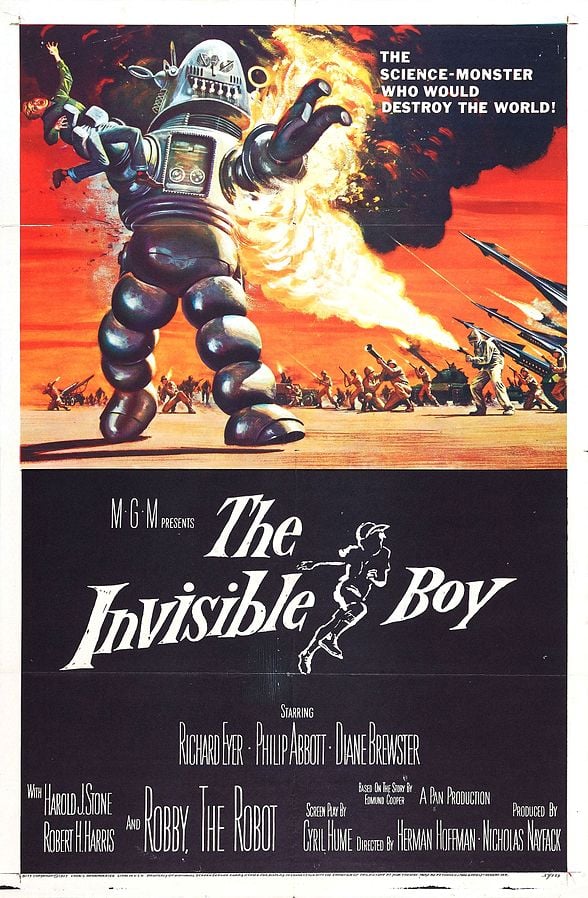 In the years to come, Robby also made guest appearances on various TV shows, including a memorable confrontation with the robot on Lost in Space — though ironically, both robots were designed by the same prop designer, who had also created Tobor.

As the decades marched on, Robbie did cameos in more TV shows — “The Addams Family,” “the Twilight Zone,” and even on “Columbo,” “The Man from U.N.C.L.E.” and “Mork & Mindy.”

If we never did get our world of clattering robot servants, at least it serves as a reminder of the dreams we were dreaming— and of that all-too-human impulse to keep tinkering with our technology — and our toys. Bernard Smith’s niece even left a comment below the YouTube video about Robbie the Robot, suggesting that Smith had a fondness for both.

“My uncle’s house always had a slightly disconcerting collection of inventions in various stages of completeness but he had a great train layout in one room which he was always also working on but never finished.”