GitLab Thrives in China and with Open Source

The DevOps platform's "land and expand" strategy has helped it grow quickly and reach into countries where competitors like GitHub and Atlassian have struggled to gain traction.
Oct 21st, 2021 9:24am by Lawrence E Hecht 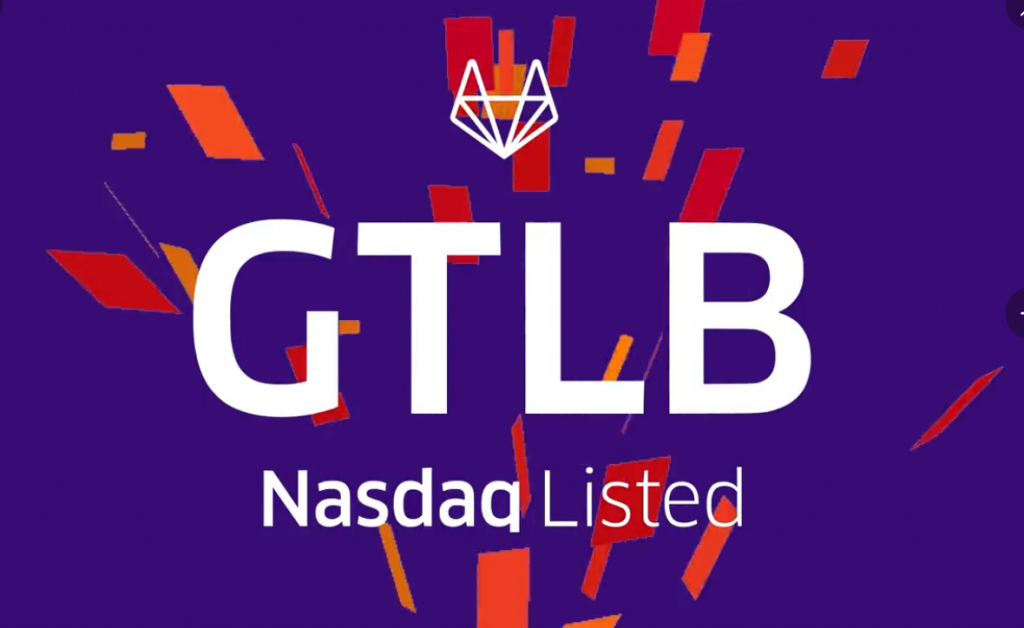 The trends underlying GitLab‘s growth and recent IPO are often misunderstood. Our own recent survey found that more companies are paying GitLab to manage open source repositories in 2021. At the same time, those paying a company besides GitHub for help managing a code repo rose from 30% to 37% since 2019.

Even more notable is GitLab’s strength in China: in a  2021 JetBrains survey, 57% of respondents from China reported they use it for artifact/repository management as compared to 35% that utilize GitHub. As GitLab continues to push itself as a DevOps platform, it will continue to promote itself as both a single toolchain companies can rely on and as part of a larger offering that platform teams offer developers.

In 2015, we told readers GitLab had opened its development process to the public. In late 2017 and early 2018, GitLab CI vied with a free tool called Jenkins (now commercialized by CloudBees) as the way developers deployed applications to Digital Ocean and the nascent Kubernetes platforms.

By 2019, it had become obvious that measuring market share for GitLab and GitHub was problematic because no one could agree on the parameters of the actual market they competed in. In a series of articles, this column asked whether or not GitLab and GitHub would compete only in niche markets or as bundlers of DevOps and CI/CD services.

Two years later, GitLab had a successful initial public offering; on that occasion, it proclaimed itself a “DevOps platform.” Although a myriad of products and functionalities are tracked, it appears that the competition will be mostly as bundlers and platform providers, but even that can be can be hard to define.

JetBrains’ large-scale, global survey “The State of Developer Ecosystem 2021” asked if companies are tied to specific tooling stack or platform. Atlassian, with its Jira, Bitbucket, Crucible, Confluence and Trello offerings was cited by about a quarter of respondents, with Microsoft (Azure DevOps/Microsoft TFS/VSTS, Office 365), Google (Cloud, G Suite, Hangouts), GitHub, and GitLab all being tied to about one in five organizations. The range of these products’ functionality is broad and includes source code collaboration, issue tracking and workflow management.

Atlassian does best among companies that are taking a multiplatform approach. A third of the study is tied to two or more tooling platforms, and among this group 60% use Atlassian products. That figure falls to 22% among the 29% of the study that only rely on one tooling stack.

In contrast, among those that rely on just one platform, 44% are tied to Microsoft or Microsoft-owned GitHub, which is double the Atlassian figure. Companies like Atlassian and GitLab vie with Microsoft and Google to build out a complete suite of tools tailored to developers' preferences. Yet, even when they do have a stack customers want, some CIOs and corporate buyers will still prefer to rely on a single vendor approach.

For now, the company is focusing on "landing" with DevOps engineers and infrastructure developers. The 2,521 respondents with that job role were more likely to use GitLab for several use cases, including artifact/repository management — 39% of DevOps engineers utilized GitLab as compared to 33% for average study participant.

GitHub is still the most used open source code repository in the world and has a massive number of active, registered users as GitHub's State of the Octoverse will attest. Yet, GitHub adoption is subpar in formerly communist countries.

GitLab was founded by a Ukrainian, the survey's sponsor JetBrains was founded by a Russian, and the study was widely distributed and into nine languages besides English. While there are always concerns about survey sampling with online surveys, GitLab's adoption is dramatically higher in China, Russian and Ukraine.

A full third of Chinese respondents claim their company is tied to the GitLab tooling stack, doubling the 16% tied to a GitHub stack. This is in contrast to in the United States and Canada, where 24% rely on the GitHub platform as compared to only 10% are tied to GitLab.

The same dynamic unfolds when looking just at the tool used for artifact and repository management. In China, 57% use GitLab for artifact or management compared to only 17% in the US and Canada. While '35%' utilize GitHub in China, the company has a substantial lead worldwide in this category, with the 58% of the GitHub developer community in India notably using it for this use case.

GitLab is demonstrating strength in China because the government has determined that both open source code management is strategically important and because GitHub in particular had become a sore point in censorship issues. The Chinese government has attempted to promote Gitee as a national champion and GitHub alternative, which likely gave GitLab the time and space to expand in China.

GitLab took advantage of that opportunity. In March 2021, GitLab and its financial partners created a local Chinese company, JiHu, to expand in China without seeming to expropriate capital. This appears to be the culmination of a countrywide strategy to focus on China rather than a beginning point to entering the market.

GitLab and Gitee are gaining customers among corporations that need to manage software code, which is by in large still maintained in private repositories and not open to the public. At present, most open source projects continue to be available on GitHub even if the actual collaboration on the project is done using a different system. Although most open source developers may have a GitHub account, that does not mean it is their preferred platform.

This brings us to how GitLab is doing among open source developers in enterprises. GitLab has grown its adoption relative to GitHub. In 2021, 53% of those utilizing GitHub for open source compliance and 32% use GitLab (up from 30% in 2020), according to more than 500 companies surveyed by The New Stack, Linux Foundation Research, and the TODO Group. Many of these company's offerings can be considered vendors of DevOps tools, and compliance is often done on behalf of the security function.

Over the last several years, demand has increased for paid services to host and manage code repositories for open source projects. Based on the same Open Source Program Office Survey, GitHub had a big lead as most open source contributors have an account with the service but GitLab is catching up.

According to our survey, companies paying GitLab for tools to manage open source repositories rose from 21% to 23% in the last year. Even more significantly, those paying a company besides GitHub for help managing a code repo rose from 30% to 37% since 2019.

The other product in the market is Atlassian's Bitbucket. Although it does not appear to be growing, the product is still very strong in the financial services sector. In this study, 37% of financial services respondents said they use a paid vendor's product besides GitLab and GitHub (e.g., Bitbucket), while the study average was only 20%.

Of the companies that manage 11 or more open source projects, 66% pay to use GitHub, which is more than double GitLab's 29%. For GitLab's "land and expand" strategy to work, its new customers will need to start creating new open source projects, work on upstream projects that rely on GitLab, or the company will likely have to steal existing customers away from its competitors.

GitLab, GitHub and Atlassian will continue to compete for the hearts and minds of the open source community. Let's see how that competition plays out and whether or not other, smaller companies become collateral damage. 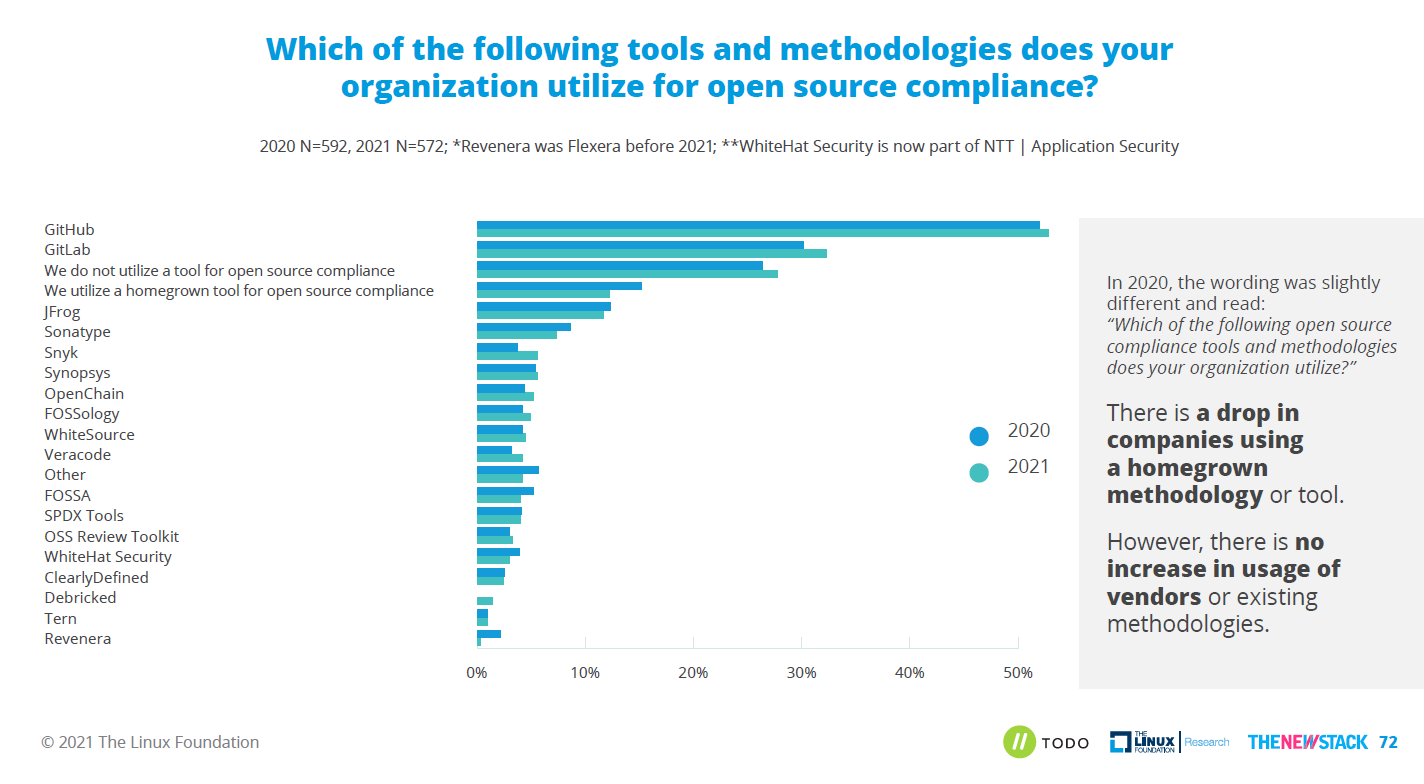 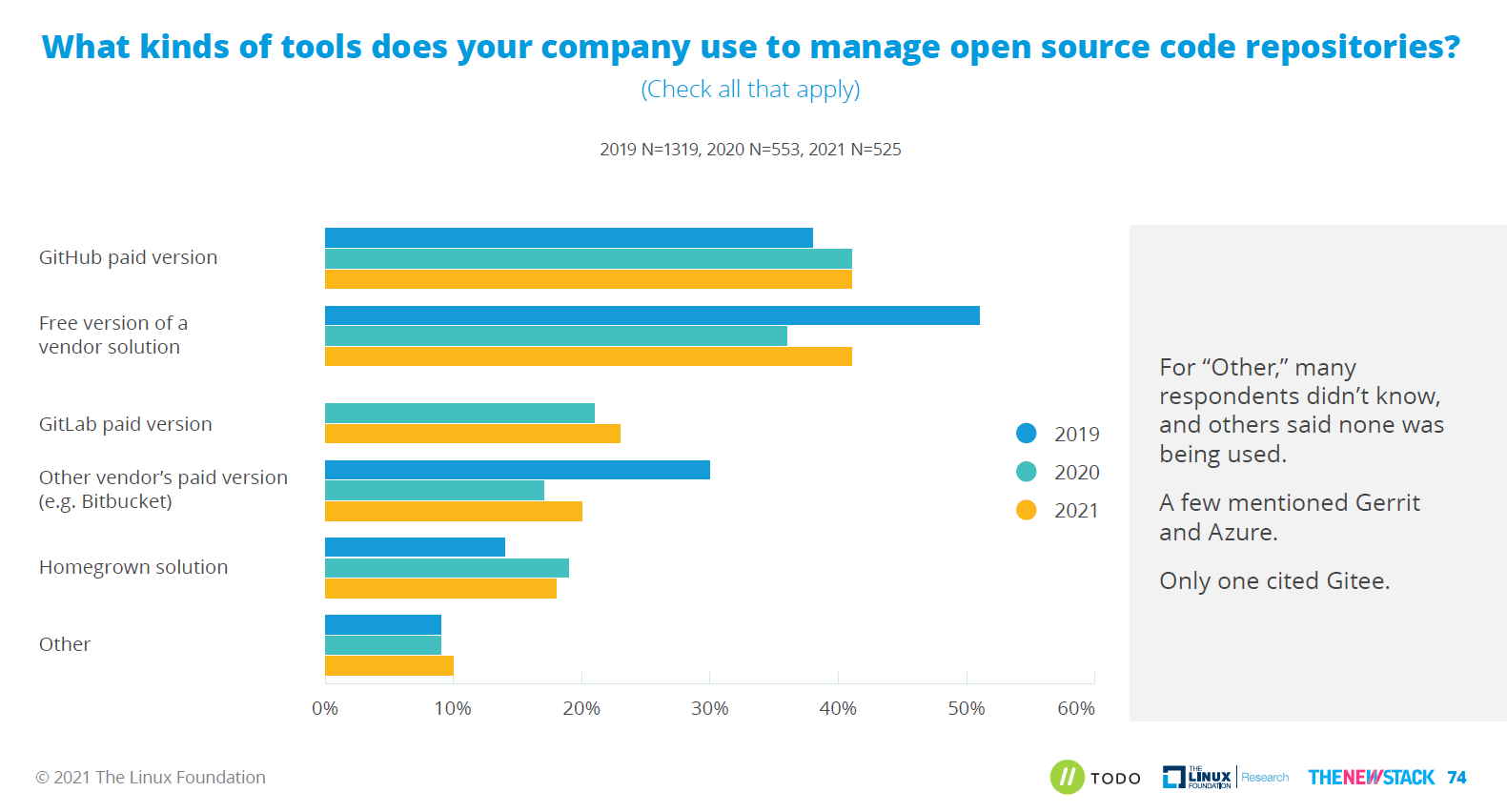 Previous Data Journalism about GitLab on The New Stack

Source: https://tylerjewell.substack.com/p/developer-led-landscape-2021-edition $49B in annualized recurring revenue, up 22% from 2020, from over 1000 companies whose products were sold or influenced by developers.