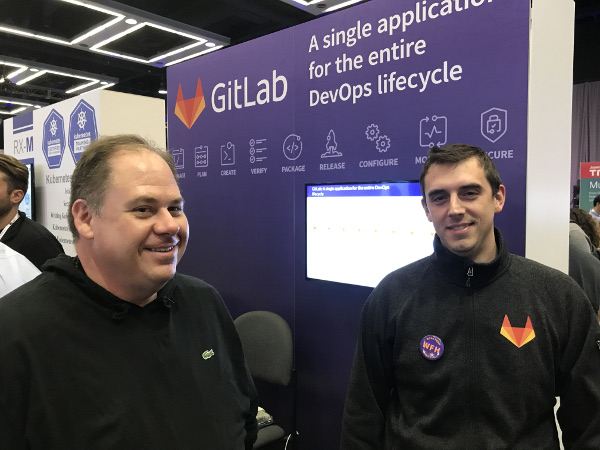 Thanks to the power and flexibility of the recently-launched Knative, GitLab has provided users with the ability to execute their serverless code automatically right from their repositories, onto Kubernetes clusters

A new start-up called TriggerMesh has provided GitLab with this capability.

GitLab Serverless, which went live late last month with the release of GitLab 11.6, can execute serverless functions on Kubernetes using Google’s open source Knative, which provides a way, among other features, to containerize and then serverless workloads that can run Kubernetes.

It is a timely offering. GitLab is facing increased competition as GitHub, earlier this year, launched, in private beta, its own advanced workflow tool, called GitHub Actions.

Developers can use GitLab Serverless to orchestrate an entire “GitOps”-style lifecycle, where once code is committed, it can be pushed into production automatically, or be automatically be moved on to a set of tests, or for further approval. The services give you fine-grained control over permissions, and runtime schedules.

The service is built on TriggerMesh’s serverless management platform, which offers orchestration capabilities, an event library and web console for managing serverless functions. It can run on the user’s own data center, or as a hosted service from TriggerMesh itself. Currently, Python and JavaScript/Node.js are being supported by the service.

The first target will be Knative/Kubernetes deployments on the Google Cloud Platform. After that, the company will look into supporting other environments, such as Amazon Web Services’ Lambda. The company already has an open source project to run Lambda functions on Kubernetes clusters equipped with Knative.

Over time, TriggerMesh could turn into a “cross-cloud event bus,” said Mark Hinkle, TriggerMesh co-founder, in a meeting during the recent KubeCon + CloudNativeCon 2018 conference in Seattle. A user can have an event-driven architecture that spans multiple clouds, in which an event in one cloud could trigger a service executing in another. “A lot of research we see out there says that serverless will be cross-cloud and multicloud,” he said.

Down the road, TriggerMesh could help users make advanced decisions about their cloud-usage, such as allowing them to compare an identical workload across a number of different providers to determine which one offers the lowest cost or fastest execution time.

“This is the first evolution in cloud that we have seen in a long time that we think is truly transformational for enterprises,” Hinkle said. “Deploying self-service IT on premises for developers still requires a degree of system administration knowledge. Serverless really allows self-service for enterprise developers. They can drop their code into their regular workflow.”

The company was formed shortly after the release of KNative, which the founders feel is instrumental in making Kubernetes easy to use in an enterprise environment, where Kubernetes expertise is still in short supply. The aim for TriggerMesh is to reduce the time it takes for enterprise developers to get the runtime resources they need to deploy their code. The company’s other co-founder Sebastien Goasguen had worked on Kubeless, a precursor of KNative.

“It allows developers to deploy directly, and you allow operational people to put in checks and balances that allow developers to operate individually,” Hinkle said. Serverless can offer a shorter time to value but it still needs a supporting structure for developers, which TriggerMesh is offering.

Joab Jackson is Editor-in-Chief for The New Stack, assuring that the TNS website gets a fresh batch of cloud native news, tutorials and perspectives each day. He has logged over 25 years in infrastructure IT journalism, including stints at IDG,...
Read more from Joab Jackson
SHARE THIS STORY
RELATED STORIES
Improving Price Performance Lowers Infrastructure Costs Why We Built Cloud Native Object Storage for PostgreSQL with Amazon S3 Cryptojacking: Free Money for Attackers, Huge Cloud Bill for You Developers Get a Quick-Start to Coding with Replit IDE Simplify Multicloud Security in 5 Steps
SHARE THIS STORY
RELATED STORIES
Pulumi Introduces One-Click Deployments Why Cloud Data Egress Is Expensive Developers Get a Quick-Start to Coding with Replit IDE Retrospective: Why Was Cloud Foundry at KubeCon? The Internet Is Not Reliable, but Planning for It Can Save You
THE NEW STACK UPDATE A newsletter digest of the week’s most important stories & analyses.
The New stack does not sell your information or share it with unaffiliated third parties. By continuing, you agree to our Terms of Use and Privacy Policy.