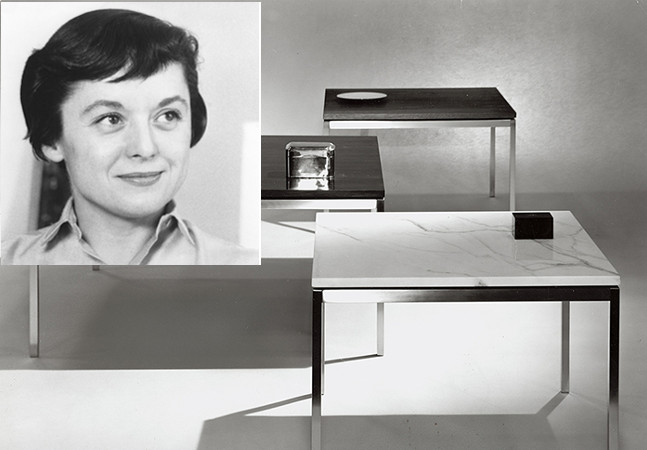 The offices that we work in have been quietly influenced by the work of legendary furniture designer Florence Knoll. “She revolutionized the spaces where we live and work,” explained a short video on Knoll.com — the web site for the company she’d founded with her husband Hans in the 1940s.

Decades before Steve Jobs obsessed over the design details of the iPhone, Florence Knoll devoted her life to pursuing great furniture design.

She was born during World War I and orphaned at age twelve. “One of my strong memories of my father was when he showed me blueprints on his desk,” she remembered later. “They seemed enormous to a five-year-old, but nonetheless, I was enchanted by them.”

Growing up in Saginaw, Michigan she was already showing an interest in architecture, and after the death of both her parents, her legal guardian sent her to the idyllic Kingswood prep school for girls in Bloomfield Hills. 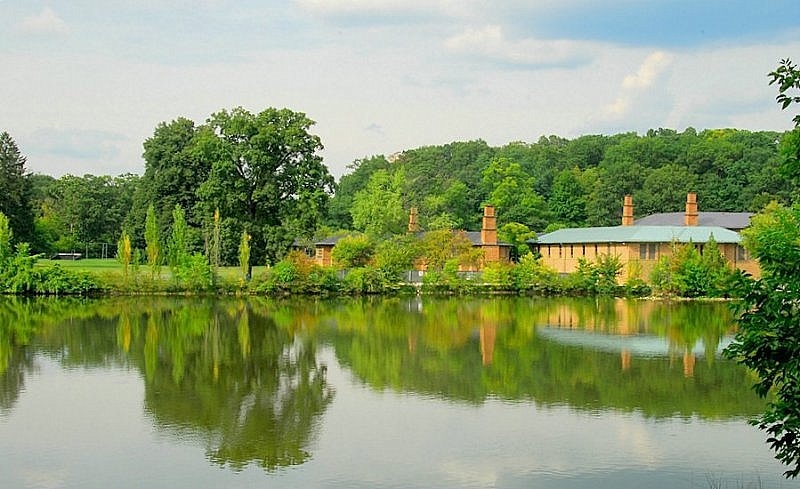 Knoll later said the art director of Kingswood “guided me into the world of architecture and design,” teaching her the basics of planning and drafting. Her first project was to design a house.

She later came back to the adjacent Cranbrook Academy of Art. Both schools were founded by an ambitious philanthropist on a 300-acre estate that was 20 miles outside of Detroit. The New York Times once wrote that “the effect of Cranbrook and its graduates and faculty on the physical environment of this country has been profound … Cranbrook, surely more than any other institution, has a right to think of itself as synonymous with contemporary American design.”

Or, as the Knoll company website puts it, “The connections she made and the skills she developed while at Cranbrook were the foundations of Florence Schust’s incredible design education and pioneering career,” 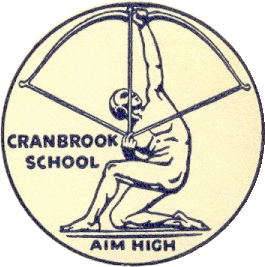 A 1984 profile in the New York Times Magazine also notes the role of Eliel Saarinen, a renowned Finnish architect who designed the campus — and then became its headmaster, bringing in several renowned artists to head the school’s various departments. Saarinen “virtually adopted” Knoll, taking her for summers in Europe and exposing her to the world of high art. Her studies continued — interrupted by the outbreak of World War II. She studied for two years at the Architectural Association in London, spent two more years at Columbia University’s architecture school, and later earned a bachelor’s degree in architecture from Illinois Institute of Technology in Chicago (where one of her teachers was the legendary architect Ludwig Mies van der Rohe). In her 20s she worked for the famous architect Wallace K. Harrison, who helped design Rockefeller Center, the United Nations and Lincoln Center.

She teamed up with furniture designer Hans Knoll, eventually encouraging him to expand into interior design. The couple founded Knoll Associates, and “With Florence’s design skills and Hans’ business acumen and salesmanship, the pair, who married in 1946, grew the nascent company into an international arbiter of style and design,” according to the Knoll website.

Florence Knoll “promoted the Modernist merger of architecture, art and utility in her furnishings and interiors,” remembers the Times, adding “especially — although not exclusively — for offices.” By 1957 the Times was already giving her work rave reviews. “It is not by chance that United States embassies and the offices of many United States corporations abroad put this nation’s best foot forward in design.”

Florence Knoll once told the Times that “Good design is the sum of a designer’s experience. It results from the ability to analyze and solve problems by organized thinking and imagination.”

Years later the Times remembers she also had another simpler credo — that “Good design is good business.”

The New York Times Magazines argues that Knoll, along with her husband, “probably did more than any other single figure to create the modern, sleek, postwar American office.”

Knoll “defined the standard for the modern corporate interiors of post-war America,” according to the company website, noting that she created an office planning unit that “rigorously researched and surveyed each client — assessing their needs, defining patterns of use and understanding company hierarchies — before presenting a comprehensive design, informed by the principles of modernism and beautifully executed…”

“Florence and the Planning Unit were responsible for the interiors of some of America’s largest corporations, including IBM, GM and CBS.” A 1957 profile in the New York Times notes her influence was everywhere — in 250 executive offices in Pittsburgh’s Alcoa building, in a 600-room dormitory at the University of Michigan at Ann Arbor, and in U.S. embassies in Havana, Stockholm, and Copenhagen. There was the Art Gallery at Yale University, the Virginia Museum of Fine Arts, as well as offices for 2,000 employees for Connecticut General Life Insurance. The New York Times Magazines argues that Knoll, along with her husband, “probably did more than any other single figure to create the modern, sleek, postwar American office.”

She brought in many of the world’s best designers, the Times remembers, and also acquired the rights to other iconic designs, including the now-ubiquitous Barcelona chair (originally designed for the Spanish Royalty to oversee the opening ceremonies of the 1929 International Exposition). “Every time you see Barcelona chairs and a table in a lobby, that’s her,” said Kathryn Hiesinger, a curator at the Philadelphia Museum of Art, in a 2004 New York Times interview. 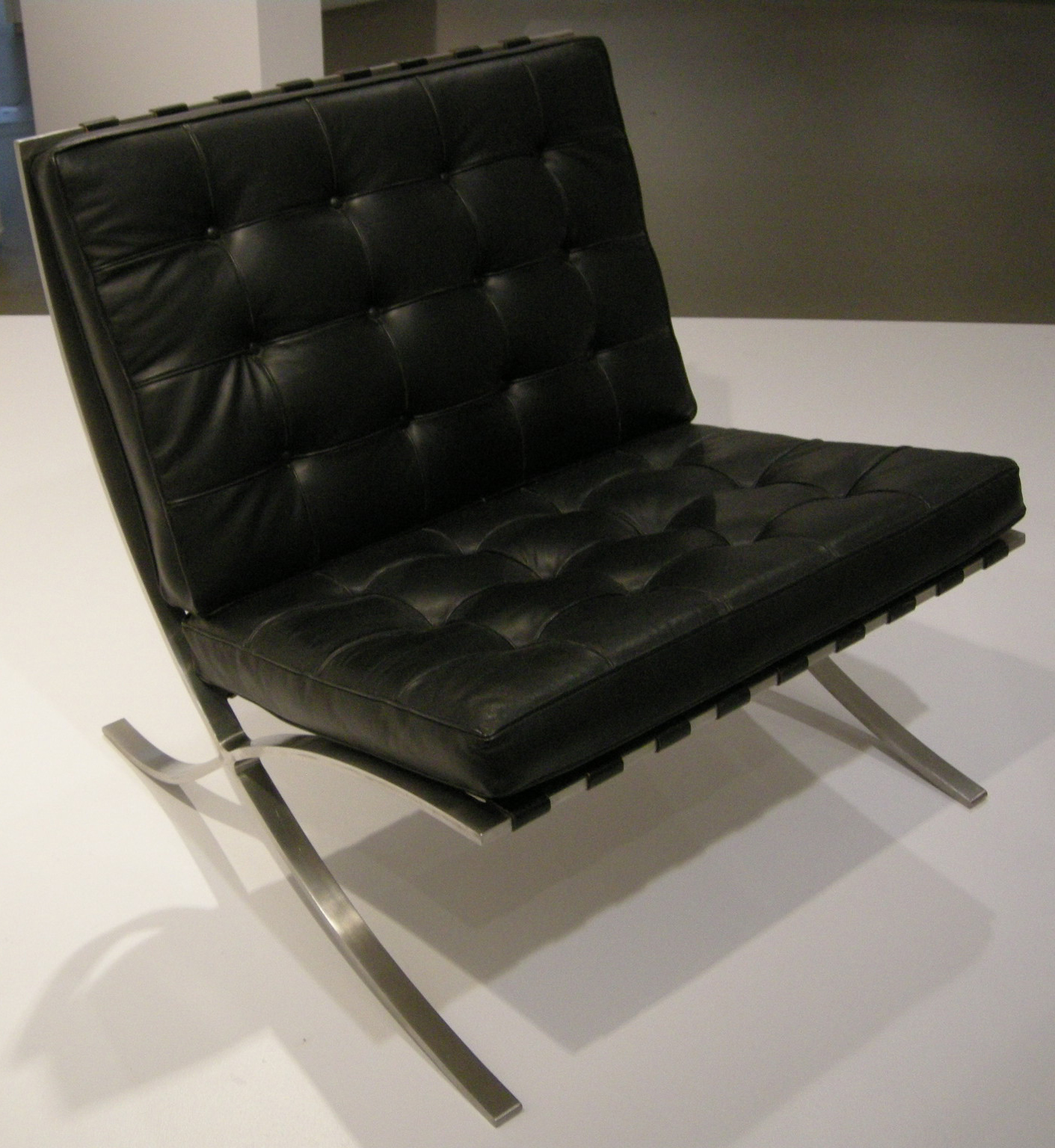 Her original yet straightforward mid-century designs epitomized Modernism, and have gone on to survive short-lived fads in the world of design. (Over 40 of the company’s designs are displayed in the permanent design collection at New York’s Museum of Modern Art.) The Times magazine notes the “crisp, taut lines” of her designs.

Florence Knoll took over the company in 1955 after the death of her husband in a car accident in Cuba — and continued her pioneering work as their architect, designer consultant, and furniture designer. The company doubled in size during her last decade at the company, and their website notes that in the 1950s she designed their showrooms in New York, Milan, San Francisco, and Los Angeles.

The Times magazine notes Knoll was the first woman to receive the Gold Medal for Industrial Design from the American Institute of Architects in 1961 — the year she unveiled the Florence Knoll table desk, part of a line she described as the essential “meat and potatoes.”

“I designed the architectural [elements] that were needed to make the room work, things like the walls, [tables] and sofas.” — Florence Knoll

“I did it because I needed the piece of furniture for a job and it wasn’t there, so I designed it…” she once said. “I designed the architectural [elements] that were needed to make the room work, things like the walls, [tables] and sofas.”

“For 20 years she was instrumental in building Knoll Associates into the largest and most prestigious high-end design firm of its kind,” reports the New York Times, which in 1964 dubbed her “the single most powerful figure in the field of modern design.”

“Revolutionizing modern corporate design was apparently enough,” quipped one 2004 article, noting that she left the namesake business behind in 1965 — after selling off her interest five years earlier — “and retreated into virtual seclusion.” (Other than fulfilling an occasional private commission at her private architecture/design practice in Florida.) The Knoll website adds that her retirement came “after pioneering an industry and defining the landscape and aesthetic of the corporate office,” Her last corporate interior project was overseeing the completion of the CBS Building after the death of Eero Saarinen, and planning all of its interior — the open-plan offices, the reception areas and executive offices. (It included a Barcelona chair.)

Over the decades to come, for any personal appearances or interviews she demanded a private jet, the Times later reported. Her second husband was the head of the First National Bank of Miami — a former client. He died in 1991. But Knoll’s talent for designing always remained strong, remembers a biography on the Knoll website. When she donated her papers to the Archives of American Art in 2000, she organized them all in custom-made boxes, carefully color-coding each file.

And at the age of 87, she suddenly became involved in a special exhibit at the Philadelphia Museum of Art titled “Florence Knoll Bassett: Defining Modern.” (Even offering suggestions on what color paint should be used on the walls.) “She’s incredibly meticulous,” said Kathryn Hiesinger, the museum’s design curator. She told the Times, “the list of objects that she sent us is a work of art. It’s Cranbrook-y meticulous.”

Knoll seemed determined to make a statement. She had colored panels installed behind iconic photographs of interior spaces she’d designed — which were hung over examples of the same furniture. “The exhibition demonstrates Florence Knoll Bassett’s sharp eye and uncompromising vision, which she used to elegantly define modern,” the Knoll website noted.

Yet she didn’t attend the opening of the exhibit. “She was not interested in public performance of that sort,” Hiesinger remembered.

In 2003 she was award America’s National Medal of Arts, and in 2017, to celebrate her 100th birthday, Knoll Inc. revived a small stool which doubles as a table that she’d first introduced in 1948 — as well as the Florence Knoll Dining Tables and the Florence Knoll Mini Desk. They also released revised versions of the Florence Knoll Relaxed Sofa, Settee, and Lounge Chair — which

It’s all a welcome reminder that her vision as a designer will be fondly remembered.

Designer Charles Eames once told her that every time he encountered one of her projects, “I feel grateful to you for doing such work in a world where mediocrity is the norm.”