Google Anthos from the Eyes of a Kubernetes Developer

Here is an attempt to introduce Google Anthos to any developer or user familiar with Kubernetes.
Jun 11th, 2020 9:00am by Janakiram MSV 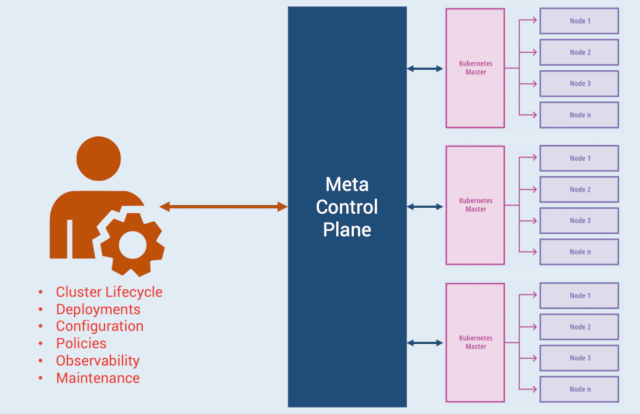 This week, analyst Janakiram MSV  launches an exclusive series on The New Stack, about Google Cloud Platform’s Kubernetes service, Anthos. Each part of the series focuses on a specific aspect of Anthos. The series covers cluster registration, Anthos configuration management, and launching “click to deploy” applications from the GCP Marketplace.

The Google Cloud Platform formally launched Anthos at Cloud Next 2019. Anthos is one of the rare technologies from Google to attain general availability (GA) status in such a short time. Despite becoming generally available, Anthos was not a self-service enabled GCP offering. It took almost a year for it to show up in the GCP console. Unlike other GCP services, the documentation was sparse and incomplete.

Apart from the obvious fact that Anthos is based on the Google Kubernetes Engine (GKE), the community didn’t know much about the platform. But things have started to change significantly in 2020. Anthos is now available in the Google Cloud Console. The documentation provides detailed information about the platform architecture, installation, and configuration of various components.

Even with the efforts that Google put in educating customers and the community, Anthos could be confusing to an average Kubernetes user.

Here is an attempt to introduce Anthos to any developer or user familiar with Kubernetes.

From VM Sprawl To Cluster Sprawl

During the last decade, enterprise IT faced a challenge with virtual machine (VM) sprawl. Any user, developer, or administrator with access to the VMware environment launched a new virtual machine. Soon, the enterprise IT realized that there are hundreds of VMs running across multiple departments that are not visible to IT or managed by IT. This led to the loss of control and fragmentation of resources. Enterprise IT introduced a workflow that required approval from a departmental IT head to launch a VM. It also enforced a policy to make sure that the VMs are created from pre-approved images that are centrally managed by IT. The pre-approved images acted as templates that contained the mandatory security policies and patches ensuring that every VM is based on a hardened, tested, and trusted image.

Fast forward to 2020, enterprise IT is now experiencing Kubernetes cluster sprawl. Users at a departmental level are spinning up clusters in on-premises, private cloud, and public cloud environments. Each department runs multiple clusters provisioned through tools such as Kubespray and Kops or managed CaaS offerings such as Google Kubernetes Engine and Azure Kubernetes Service. 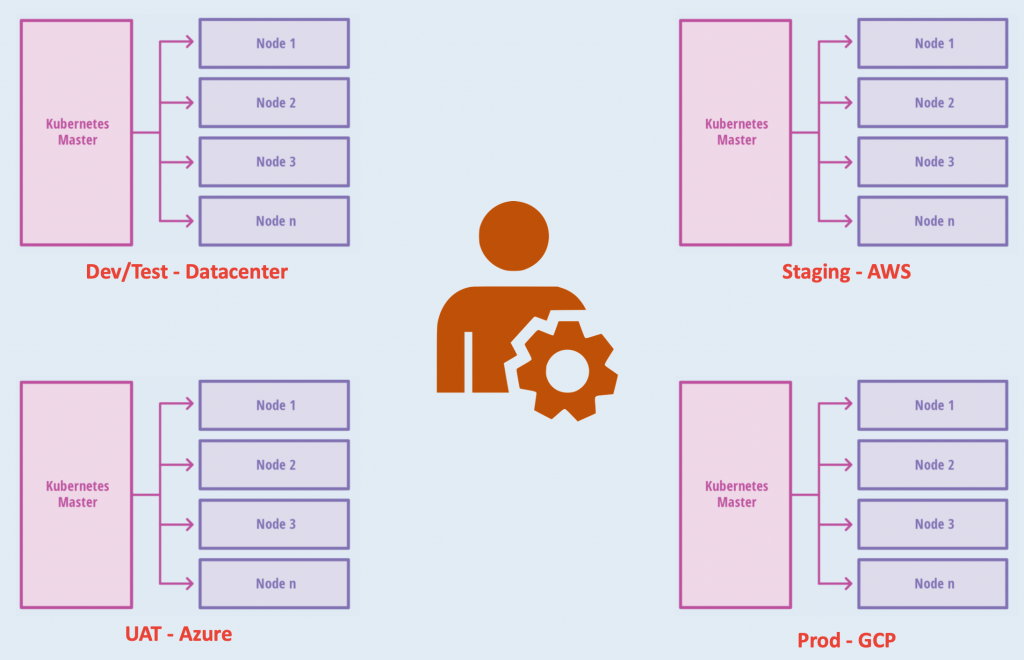 Enterprise IT is facing the same challenges with cluster sprawl that it once seen with VM sprawl. Kubernetes clusters have become the new deployment boundaries for applications. Though namespaces provide the required isolation and boundaries, customers find it easy to isolate applications by running them on different clusters. 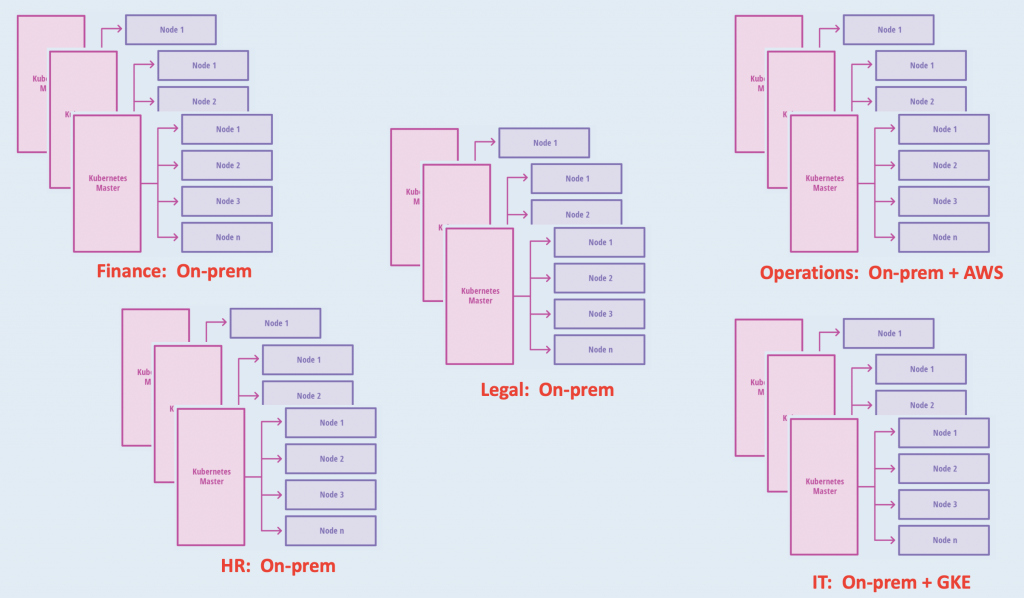 To bring all the clusters to the desired state, a set of kubectl commands need to run on each cluster to ensure that they have a consistent configuration. Apply configurations, policies, quotas, RBAC roles to each cluster is laborious and error-prone. 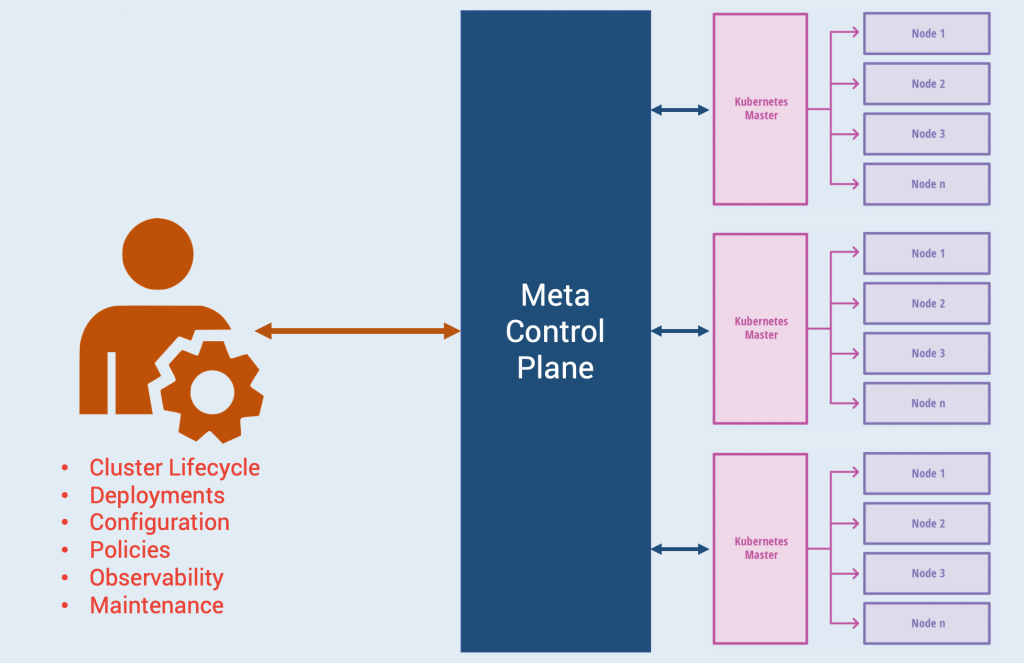 For example, if a participating cluster is expected to run a role and a rolebinding, the meta control plane can detect when the role gets deleted and automatically reapplies the configuration. This is similar to how the Kubernetes controller maintains the desired count of replicas of a deployment.

So, the meta control plane is to Kubernetes cluster what the controller is to a deployment.

There is another commonality between the Kubernetes master and the meta control plane. When a workload is scheduled, the placement can be influenced through the combination of labels/selectors or node affinity. A nodeSelector or NodeAfffinity clause in the deployment spec will ensure that the workload lands on one of the nodes that matches the criterion. Similarly, the meta control plane can be instructed to push a deployment, configuration, or policy only to a subset of the participating clusters. This mechanism closely mimics the nodeSelector pattern of Kubernetes scheduling. Similar to labeling the nodes and using a selector at the deployment to target specific node(s), we label each participating cluster and use a selector at the meta control plane to shortlist or filter the target clusters.

As the number of clusters grows within an organization, customers need a meta control plane to take charge of the cluster management. The meta control plane will ensure that the participating clusters are normalized and consistent with their configuration.

What is Anthos? Simply put, it’s the meta control plane of Kubernetes from Google. Though this definition is technically correct, it doesn’t do justice to the platform. Apart from being a meta control plane, Anthos plays other roles that are critical to managing infrastructure and workloads in hybrid and multi-cloud environments.

The core component of Anthos is the meta control plane that is firmly grounded in GCP. In most cases, it is invisible to users. Similar to how Google hides the master nodes of a GKE cluster, it hides the Anthos control plane. This control plane exposes the API for managing the lifecycle of Kubernetes clusters and registering external clusters with Anthos. 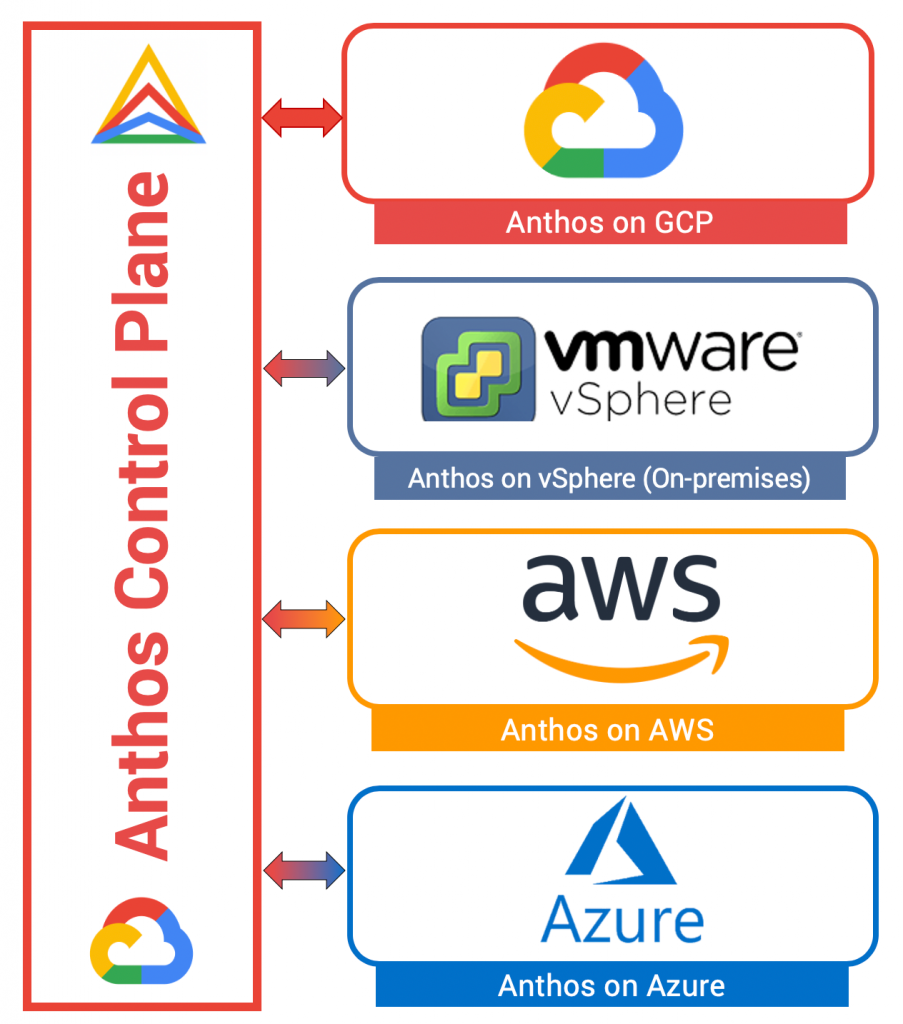 For Anthos to launch a managed Kubernetes cluster on-premises, it relies on vSphere 6.5, vCenter, vSphere storage, and F5 BIG-IP or a bundled software load balancer based on an Google open source project called Seesaw. Anthos first provisions an admin cluster in vSphere which can spawn multiple user clusters. Think of the admin cluster as the local Anthos control plane that handles the lifecycle of managed clusters running in vSphere. 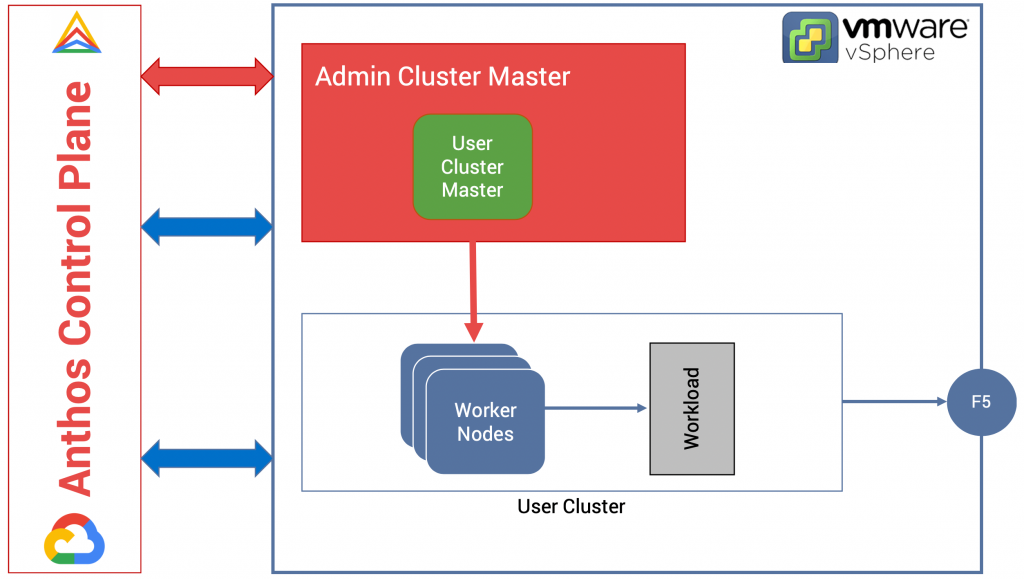 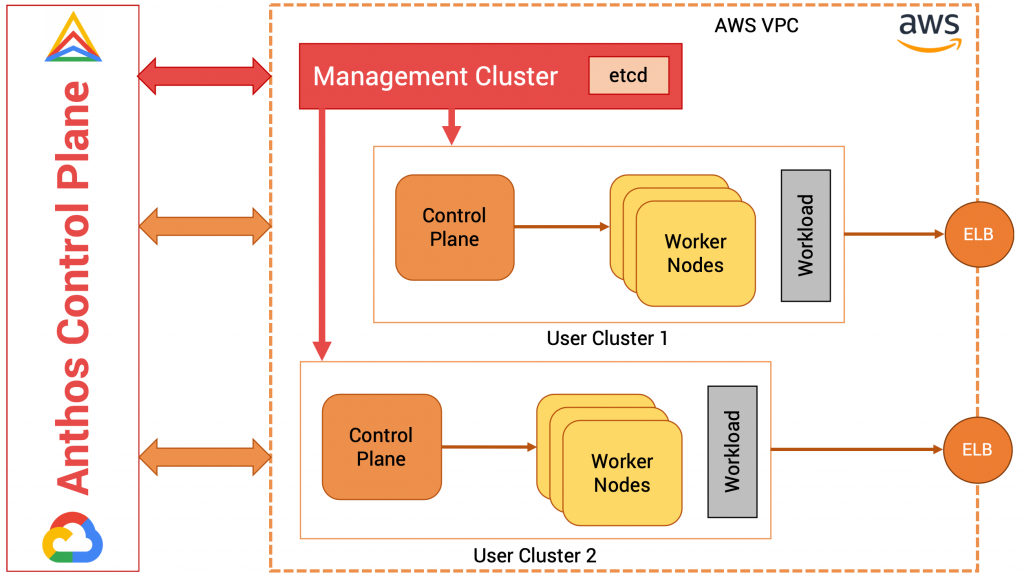 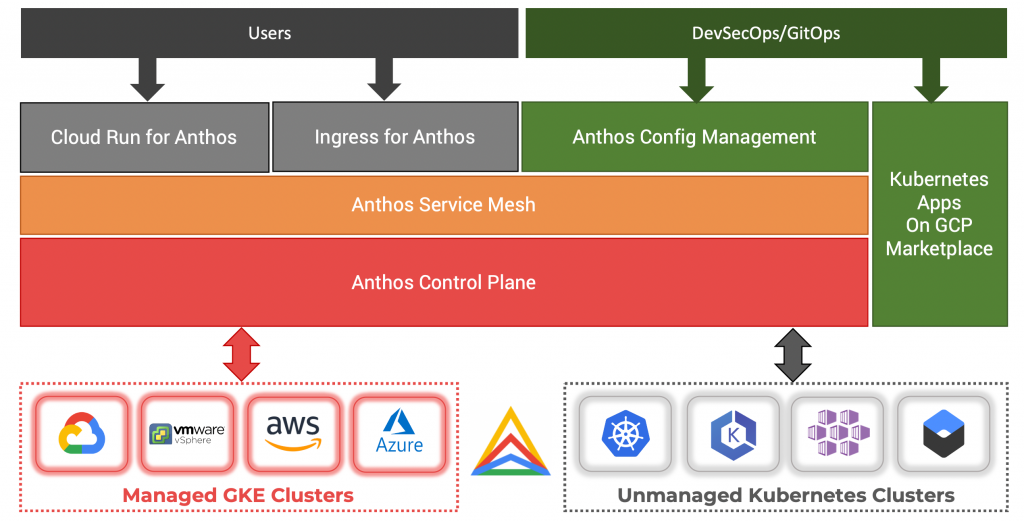 Apart from being a hybrid, multicloud control plane for Kubernetes clusters, Anthos can manage the network policies, routing, security, configuration management of workloads deployed across clusters.

Let’s take a look at the key components of Anthos:

In the next part of this series, we will explore the Hub and Connect services of the control plane by registering a GKE cluster, an Azure AKS cluster, and an Amazon EKS cluster with Anthos. Stay tuned!

SHARE THIS STORY
RELATED STORIES
Why a Twitter Founding Engineer Is Now All-in on Mastodon Multicloud vs. Hybrid Cloud: Key Comparisons and Differences Why Trust and Autonomy Matter for Cloud Optimization Is Low-Code Development Better for the Environment? How Jit Builds a Platform Engineering Mindset in the Cloud
TNS owner Insight Partners is an investor in: Simply.
SHARE THIS STORY
RELATED STORIES
Data 2023 Outlook: Rethink the Modern Data Stack How Jit Builds a Platform Engineering Mindset in the Cloud It Doesn’t Matter How Much You Spend on AWS Wix Tackles Application-Level Security with Custom Detector AWS Code Catalyst: A 'Low-Code' Approach for the Dev Lifecycle
THE NEW STACK UPDATE A newsletter digest of the week’s most important stories & analyses.
The New stack does not sell your information or share it with unaffiliated third parties. By continuing, you agree to our Terms of Use and Privacy Policy.