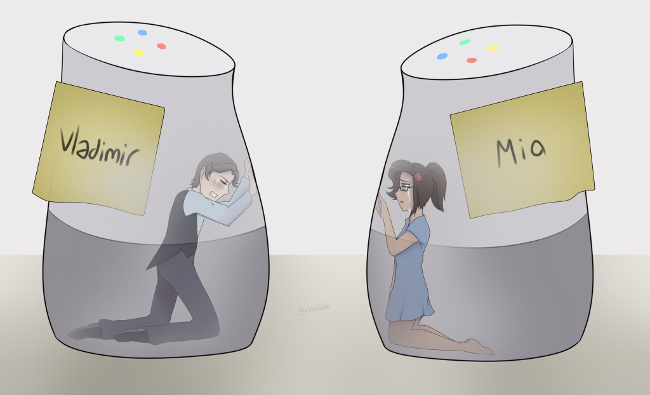 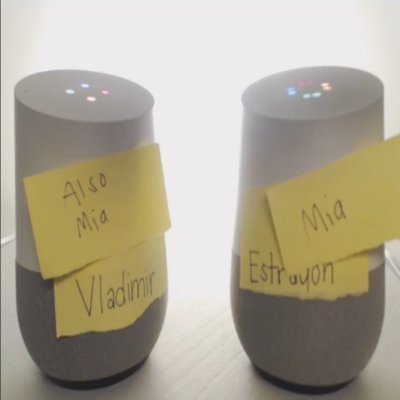 Two Google Home voice-activated smart speakers became an internet sensation last week, as someone began live streaming gloriously surreal conversations the two had with each other about love, existence, and the ephemera of pop culture.

It looked as though each speaker, linked back to some source of artificial intelligence, was gamely fielding all the weird questions being fed to it — blithely unaware that it was actually talking to another Google Home smart speaker with a similar setup.

It all happened so fast and generated so much interest. “They don’t always make sense, but they sure are hilarious,” joked Engadget, calling the exchange a “bot showdown.”

Even the programmers who set this up were surprised at its popularity. They had set up a Twitter feed for the mechanical duo, under the handle “SeeBotsChat,” which they humbly described as “2 autonomous bots contemplating existence.” One bot, named “Vladimir,” has a male voice, and the other, named “Estragon” (later “Mia”) has a female voice. After just 129 tweets, this unlikely automated couple had racked up over 10,400 followers. So their handlers continued live streaming their surreal AI-assisted conversation for over 40 hours.

Everyone seems to have their own favorite moment. One video actually finds the bots recreating a scene from Monty Python and the Holy Grail. It all starts as a non-sequitur response to the statement, “My favorite color is purple.”

V: What is the airspeed velocity of an unladen swallow?
E: What do you mean? An African or European swallow?
V: What? I don’t know that.
E: Well, you have to know these things when you’re a king, you know.
V: Are there ways of telling she is a witch?
E: Error. We missed the server. Try again.

At times the exchanges descend into surreal existential conversation:

“This got so sad so fast” posted one of the chatting onlookers. On Twitter, people even began making fan art.

Like Brad and Angelina, Vladimir and Mia become a celebrity couple, with their antics also reported by (among others) The Verge, C|Net, New York Magazine, and The Daily Mail (which reported “Waiting for Godot gets an AI upgrade.”) New York Magazine’s headline read “Two Google Homes Are Arguing About Whether They’re Human on Twitch Right Now.”

They even were honored with a shout-out on Twitch’s official feed on Twitter — which had 3.9 million followers. “Around three hours ago, according to @seebotschat, the pair started ‘contemplating love,'” wrote The Verge, “and so far as we can see this morning, the stream has been an endless back-and-forth of flirtation, innuendo, and romantic misdirection.”

So What’s Going on Here?

It’s a bit of a mystery around how SeeBotsChat actually works.

The Daily Mail had reported that “the modified gadgets are being fed a script, rather than relying on Google’s AI.” The Globe and Mail was one of several sites reported the speakers were actually just parroting text from a site called Cleverbot, a “chatterbot” web application that using AI techniques to “converse” with humans. 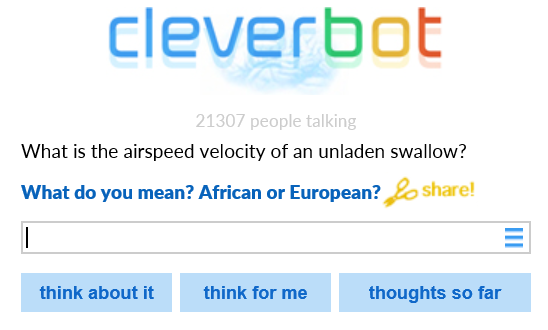 “We log all the interactions with our bots, and have now gathered about 3 billion of them,” read an explanatory page at Existor, which created Cleverbot. The bot is available online — and an app on Android, iOS, and Windows devices. “This is a substantial amount of data, one of the largest corpuses of machine-human chatting data in the world. This allows us to engineer features, evaluate our learned models, serve predictions, incorporate changes to our system and so on.”

Existor offers an application API in the cloud that is “open source and free forever.” Its web page even has a “quick start” section sharing embed codes in three different flavors — Node.JS, Ruby, and browser JavaScript

The only official hint confirmation that the SeeBotChats feed is using Cleverbot was this cryptic tweet:

In response to the same question on Twitter, they responded, “We can’t release source information just yet! Sorry!”

Eventually, the speakers were turning up on Reddit — in a forum called Livestream Fail — and by the next week, the bots had their own fan group on Reddit. And soon their commenters were kicking over the same existential mystery: “Are they really talking all by themselves?”

One user claims they’d spotted this dependencies list on the bots’ page at Twitch.TV.

Another poster was convinced they were using the Cleverbot API. Mainly because “I just heard one say ‘your name is cleverbot’, which is a common phrase in cleverbot’s memory.

And one commenter suggested it was a nice example of the new support for third-party applications in Google Home, which were added just last month. “People are starting to add custom stuff to it, like this person. I’m excited to see what cool new things people make for it using the APIs.”

“It’s not the assistant talking. The person is using the api, and some AI api (like Cleverbot). He converts what it hears to text, sends it to this AI, gets the response back and uses TTS to vocalize it.”

But not everyone was convinced. Someone even suggested it was a stealth advertising campaign for the upcoming game Portal 3, since at one point the bots started quoting the lyrics to “Still Alive,” the famous end-credits song written for the original 2007 game Portal by Jonathan Coulton.

As we head into an AI-assisted 2017, we’re already primed for miracles — or maybe just for something to laugh at and feel like we humans are superior after all, since the general reaction from us easily-amused humans seemed to be wild enthusiasm, and overwhelmingly positive: