When Gopher Ruled the Internet 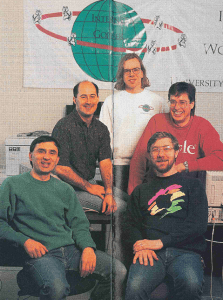 Before the Web, there was Gopher.

This month saw geeks casting their eyes back to the early 1990’s in response to a long article about the pre-web protocol Gopher. Tim Gihring, a former AP reporter, tracked down developers from the University of Minnesota team that brought the world its first widespread experience with hyperlinks and bookmarks.

Writing for MinnPost, a nonprofit site with stories about Minnesota, Gihring delivered a poignant look back, titled “Obsolesced” It promised a story from 25 years ago about when “a small band of programmers from the University of Minnesota ruled the Internet. And then they didn’t.”

The article credits Mark McCahill — a windsurfer — with coining the phrase “surf the internet.” Gopher developer Alberti even points out that Tim Berners-Lee used Gopher to share information about his idea for the worldwide web. And in 1992 Tim Berners-Lee actually approached McCahill about collaborating on Gopher/web hybrid.

“Talking to him is like a ball of twine experience,” McCahill remembered in the article. “The Web you see now, that’s how he thinks.” McCahill did take a look at the early web — which was still in its text-only phase — but “I wasn’t feeling it. I told him, ‘Tim, I don’t think so.’

Gopher allowed searching all the document repositories — and more importantly, it had already been around for months. Gihring’s article captures the tool’s glory days. “Gopher developers held gatherings around the country, called GopherCons, and issued a Gopher T-shirt — worn by MTV veejay Adam Curry when he announced the network’s Gopher site. The White House revealed its Gopher site on Good Morning America.”

But it was still a world of mainframe computers — UNIVAC was headquartered in Minnesota — and McCahill remembered the university’s computer center’s opposition to personal computers as “a religious war” in which he found himself siding with the heretics.

“The idea of democratizing access to computing, putting computers in the hands of everyday people — that resonated with me… If you were interested in PCs, you just absorbed that attitude by osmosis.”

From then on, his goal would be “take technology that is cutting edge and get it to the point that it’s palatable to mom and dad and English majors.” In 1989 he developed one of the first e-mail clients with a GUI interface — POPmail — and began working on a project to connect all of the university’s online computers.

The university hated Gopher, however — and according to the article, literally forbid the team from doing any further development on it. There was no central authority overseeing which information became available on the network — and it committed the even greater sin of not using a mainframe computer. Finally, the computer center’s director agreed the Gopher could use their own time to continue working on it. But with little interest from the university, they decided just to release the software to the larger internet community.

“It was the first viral software,” Gopher developer Bob Alberti told MinnPost — and that worldwide enthusiasm pushed the university into allowing further development. And 25 years later, there’s now a picture honoring McCahill at the University of Minnesota with an inspiring quote. “[W]e were the agents of change…we were helping people use the little computers, and we were moving our stuff off the mainframe.”

They were riding high. Senator Al Gore came to visit the campus. Between 1992 and 1995 they held four GopherCons — attended by everyone from the New York Times to representatives from Microsoft. The poor six-person Gopher team was still answering calls to the university’s helpline, and never did receive any additional funding — while supporting a software being used by the rest of the world. The university even considered axing the department altogether and outsourcing all of the university’s computer maintenance.

In March of 1993, the team posted a letter online addressing the Gopher-using community. “In a time where we are having budgets slashed, it is impossible to justify continued (increasing) resources being allocated to Gopher development unless some good things result for the University of Minnesota. This is a fact of life…”

At GopherCon 1993 the director of the university’s computer center announced that for-profit users of the software would now need to pay a licensing fee to the university — between hundreds and thousands of dollars. “Many users felt betrayed,” writes Gihring. “In the open-source computing spirit of the day, they had contributed code to Gopher, helping the team keep up with the times. Now they were being asked to pony up.”

It’s interesting to read McCahill’s reaction when tech investors started investing in commercial web browser companies: “The fix was in.” With faster modem speeds, it became feasible for browsers to download images. The epitaph “obsolesced” came from 1994, and it sounds painful. “I saw a URL on the side of a bus,” McCahill remembered, and he realized that Gopher just wasn’t good for advertising.”I knew it would start winding down.”

“In the spring of 1994, Web traffic overtook Gopher traffic for the first time,” writes Tim Gihring. “Gopher, within a few months, began to decline. Its reign had lasted three years.” Ironically, the final nail may have been the university’s unwillingness to fund the team. When bad accounting by a top transplant surgeon at the University led to indictments for fraud and embezzlement — later dropped — the whole Gopher team was diverted to building an accounting program…using the web.

Eventually, the University of Minnesota released Gopher as free software under the GNU General Public License — but it was clear to pretty much everyone that the web had become the new standard. The article offers a fascinating look at the internet that might have been — or at least, at life before the worldwide web. “[W]e’ve learned to abide the misinformation, solicitations, and scams that thrive in its chaos,” Gihring writes poetically, “though it has changed us and society in ways we are only beginning to understand.”

And his article also offers another lingering look at a third competing technology called Hyper-G, which the Gopher pioneers seem to think was the best option. “You have to be at the right time and place to have your technology take off and become popular,” said Gopher developer Farhad Anklesaria. “If you’re too early, you won’t last.

But the article led to the second round of discussion, first becoming a reminder of how much things had changed, startling memories and triggering fond remembrances all around the internet of today. It drew 721 upvotes — and 173 comments — when the article’s URL turned up in Reddit’s “programming” subforum, and 141 more in a forum about Minnesota. Fortune.com even ran an article about Gihring’s article.

232 people upvoted the link when it appeared on Hacker News — drawing 62 comments, many about how the internet has changed. “Honestly, I wish it were still non-commercial: available to be used by companies (as it was even in the 90s), but not as an advertising medium.” One sad comment read “I miss Gopher. I remember when the Gopher sites started to display: “This service has been discontinued. Please use WWW instead.” But someone else pointed out that six months ago the popular discussion site Metafilter brought back their Gopher server “after 15 years of downtime” when one of their users requested it.

And a discussion last weekend on Slashdot turned up more Gopher enthusiasts — and at least one geek who’s still using it to host copies of ebooks and readme files. He points out there’s even a Firefox plugin called Overbite which restores Gopher functionality to Firefox. “Gopher was more about indexing the content than embedding links in the content itself,” they remembered in another comment. “For some kinds of contents, gopher made quite a lot of sense.”

One user (posting anonymously) suggested Gopher’s popularity might increase if more users tackled fun projects to add functionality to Gopher sites. “There’s a small but passionate community surrounding Gopher right now. A good portion of them are doing it to move away from the Web since it’s become so commercialized and the technology is becoming so large and unwieldy that security is a real concern. Some make a gopher hole to mirror their website, or vice-versa.”

Gihring’s article notes there are still 140 gopher servers online — many of them set up on April Fool’s Day. But one encouraging sign is that’s more Gopher servers than the 86 that were available in 2007. In a poignant essay, Cameron Kaiser wrote “Gopherspace had never disappeared after all; it had just gone underground. Even after the University of Minnesota finally turned off gopher.tc.umn.edu a few years later, Gopher hobbyists live on, writing new features [and] creating clients and software, and adding new content to their own little worlds.”

“If the Web seems to be a heavy or fluffy distraction as you wait for your browser to grind through another Flash animation and a pile of ads, perhaps it’s time you took a trip back underground for a glance at the simpler and cleaner world that the Internet used to be.”

SHARE THIS STORY
RELATED STORIES
The Process Equation (Cadence Is Everything, Part 2) A Guide to Better Developer Experience New Book Identifies 26 Lines of Code that Changed the World eBay: Betting on Open Source Is Great for Your Business WebTV in 2022? Vintage Tech Enthusiast Shows How on YouTube
SHARE THIS STORY
RELATED STORIES
It's No Longer about How You Write Code but How You Operate It What Is a Sociotechnical Knowledge Map and Why You Should Care How and Why to Respond to Incidents the Right Way A Guide to Better Developer Experience Building an Internal Developer Platform Isn't Just about Tools
THE NEW STACK UPDATE A newsletter digest of the week’s most important stories & analyses.
The New stack does not sell your information or share it with unaffiliated third parties. By continuing, you agree to our Terms of Use and Privacy Policy.